Monday was Labor Day in the U.S.  We had a wonderful relaxing weekend.  Patrick's birthday is today but we decided to spend Labor Day festooning him with birthday treats.
I asked him what kind of birthday cake he wanted this year for his birthday.
This took much deliberation and it was days later that I got an answer.
A Buche de Noel cake.
This is the yearly french Christmas cake that I make, ahem...at Christmas time.  Its pretty labor intensive so I slightly winced but was amused at his selection nonetheless.  Patrick LOVES homemade goodies.  Nothing storebought will suit his palate when it comes to desserts.  He makes wonderful pies, cookies and other yummy sweet delectibles...All from scratch, so he knows when one has cheated.
We are a week away now from going to France so I pulled out the french cookbook that our french family gave us as a gift for hosting their daughter a few years back.  The recipes all look delicious (and highly caloric)
but
they are all in french.
I speak a fair amount of french but all of the french units are different so figuring out quantities and measurements seem daunting.
I decided to try out a beef tenderloin wrapped in pastry dough filled with julienned vegetables.  It looked so yummy in the cookbook, sort of like Beef Wellington, and that is one of Patrick's favorites.  I was at Sam's meat section and saw all of the meat was cut into steaks instead of one long cut so I went ahead and bought that.
We decided instead of braising them on the stove top to do it on the grill with this rub that Patrick found this summer.
Its called
RubGrub
and it is
YUMMY.
I know, the name is really tacky but it has made all of our barbeques this summer delicious.
I julienned the shallots and carrots and sauteed them in butter and put them aside.  When the steaks were done, I rolled out the filo dough, separated it into 4 sections, spread the vege mixture on each one, placed a steak on top and then rolled them up into cute packages.  The recipe said to brush each with egg yolks all over so I did that and put them into the oven.
20 minutes later,
they were golden, crisp packages and the aroma filled the entire house.
Chester and the cats were dancing around and the kids were wandering in and out sniffing with anticipation. 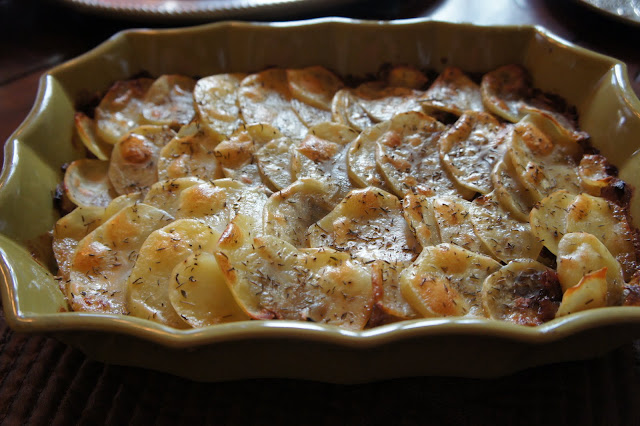 Next up for Patrick's birthday dinner was Potatoes Au Gratin with thyme and carmelized onions.
This is a recipe that I found in
Bon Appetit
and added to my collection of favorites in my binder.  Its a pretty dish, tastes divinely rich and smells so armomatic while cooking in the oven.  It requires many onion slices all cooked for 40 minutes on the stovetop in order to carmelize and create a yummy sticky texture and flavor.  The potatoes, cooked bacon, thyme, and cream are all layered until all of the ingredients are used up.  After about 40 minutes in the oven, I stick the dish under the broiler at the end to make the top all golden and crispy before bringing it to the table.
One of my family's favorite dishes and wonderful for holiday gatherings. 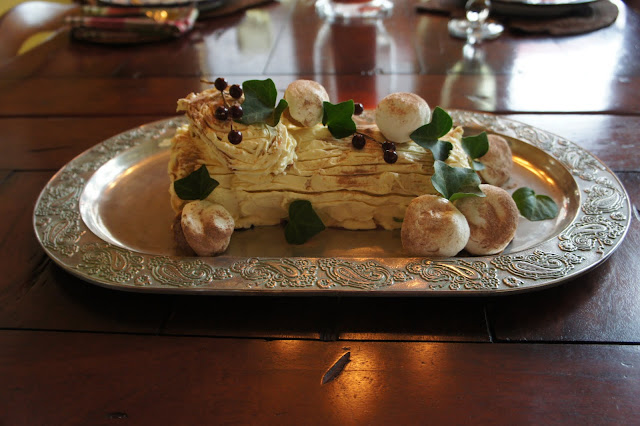 I'll get to the big highlight of his birthday -
The Buche de Noel.
I tried to make it more fall-like instead of Christmas-y.  Anne-Gaelle, our french girl who lived with us said the cake is served in France year round, not only at Christmas but we tend to only make it during the holidays.  Its a tough cake to make.
The cake part has to cook just long enough to be soft and malleable but not dry so that it can be rolled.  The butter cream frosting takes a while to get the sugar water combo to "hard ball" stage.
Oh la, la.
I never know if its going to come out well!  All was good,
and everyone declared it edible.  Instead of a coffee frosting, Patrick decided on vanilla, which was yummy. Riley helped me make the cake and the frosting which was cute and sweet of him.
He really likes to be in the kitchen and definitely wants to learn how to cook.  I have him making omelets now and he does a really good job.
We spread strawberry jam on the inside of the buche.
I think next time,
I would like to try something like nutella on the inside with raspberry jam.  I think that would be tasty.

The kids set the table so pretty, we lit candles on the table and had the most wonderful family time.  Patrick opened his gifts (clothing for the trip and new steak knives) and savored the delicious food.  It was a ton of work but I was so glad to do it and create this wonderful family memory.

Patrick
is
the most wonderful husband
and I really wanted to do many special things for him to show him how much we appreciate him.  Riley was adorable and declared my meal to be the best
"at home meal"
ever!
When we thought we were stuffed, we somehow managed to each have a second helping of
La Buche!
Happy Labor Day and to my very sweet husband, Happy Birthday.
I love you.