Really had a challenge in the kitchen this weekend.
I decided to try out another episode of Curtis Stone's "Take Home Chef".
This was the episode where he cooked for 'Jackie'.
If you would like to try any of these dishes, go  here
The menu was inspired by Southeast Asian cuisine.
This is new to me and outside my comfort zone.
O.K., I'm not really talented enough yet to 'have a comfort zone'
but that sounded really good to say.
It was a difficult menu for me because the learning curve was steep.
I don't think each dish was difficult necessarily, they each had elements that need trial and error.
I have NEVER fried anything before.  Fried oysters, however, are one of my favorite foods.  I have had some amazing oysters since moving to Texas this past year.  Basically, my oil was not hot enough.
The oil has to be really hot!
I think I'll just leave fried food up to the experts, like  the delicious restaurant
Goode Seafood Co. in Houston!
Delicious.
Really aromatic.
All of the scents were heavenly.
I learned how to break open a coconut, scrape out the cream, pound lemon grass, dice chili peppers, and steam mussels.  These were all new cooking experiences for me.  Hardest part of this dish was not overcooking the mussels.
The timing of wok-ing the mussels in the broth and steaming the fish just right was tricky.
Whole Foods didn't have Red Snapper so they sold me Rockfish.
The fish was thick and wouldn't steam as fast as necessary.
I put the mussels and all of the vegetables in the wok and then placed my bamboo steamer on top of that in order to steam the fish.
Mussels cooked, fish didn't.  Timing of this dish was difficult.  I wouldn't want to serve it if I had more than 4 guests!  I would also choose a thinner fish that will cook faster.

Oh!  The intoxicating smell of baking bread.
I am addicted to bread baking.
This is the loaf as it came right out of the oven.
Every weekend I would like to try a new type of bread.  I hope it gets easier, though.
All of the 'resting', 'unresting', 'refrigerating', 'covering', 'proofing', is boggling.
Hopefully, if I get better some of these steps will feel more natural.
This was the first recipe in my new bread book,
Artisan Breads Everyday by Peter Reinhart.
Yum. Yum.
This would be a good choice to serve a group of guests because you can do steps ahead of time. And...it is such a wonderful presentation.
Looks harder than it is.
I made the 'base' for the souffle the day before.
The only thing I had to do during dinner was wisk the egg whites and sugar, mix that with the chocolate base, fill the ramekins and then pop them in the oven for 12 min.
I buttered and coated the ramekins with cocoa the day before as well.
If I make them again, I will fill the ramekins almost to the top.  I was afraid to fill them too high and make a mess.
Its o.k.
They don't rise as much as you think so fill them pretty high to get that dramatic effect.
However,really disappointed with this photo.
I was trying out some lighting techniques that I read about. 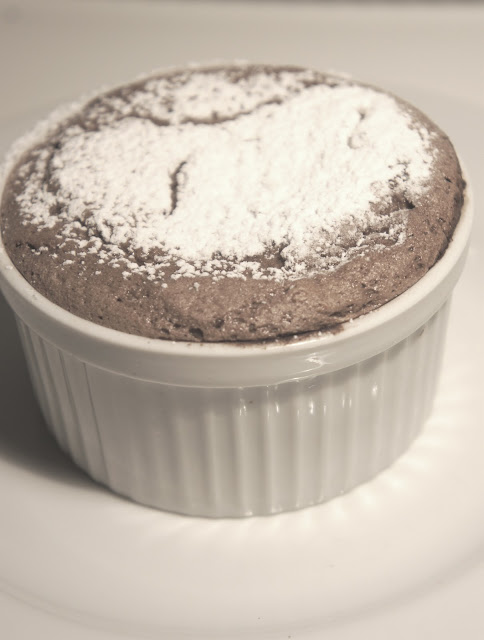 Back to the drawing board.
I wasn't thrilled with the lighting or quality of the photo.
Sooooo much to learn.
But,
already dreaming of what to cook next.
Curtis?  What do you have for me?
Steamed Red Snapper and Mussels in Coconut Broth and Lemon Grass:
2-inch/4-cm piece fresh lemon grass
2 tablespoons/30 ml olive oil
24 black mussels, scrubbed and de-bearded
2 red jalapeno chili peppers, finely chopped
1-inch/2-cm piece fresh ginger, peeled, finely chopped
2 garlic cloves, finely chopped
4 baby bok choy, halved lengthwise, leaves separated
1/4 cup/60 ml sweet white wine (such as Gewürztraminer)
1 young coconut, flesh roughly chopped, water reserved
Four 6-ounce/180-g red snapper fillets
1/2 cup/120 ml coconut milk
Salt and freshly ground black pepper
½ bunch fresh cilantro
PREPARATION:
Using the dull side of a large sharp knife, pound the lemon grass to break it apart and help release its aroma.  Place a large wok over medium heat and add the oil.  Add the mussels, lemon grass, chilies, ginger and garlic to the wok.  Toss the wok to mix all ingredients and then cover the wok.  This will allow the steam to build up in the wok and cook the mussels.
Add the bok choy, white wine, coconut water, and coconut flesh to the mussels and toss to combine.  Place the snapper fillets on a wire rack. Place the wire rack with the fish fillets over the mussels.
Cover and steam for 5 to 7 minutes, or until the fish is just cooked through and the mussels have opened. Discard any mussels that do not open.  Add the coconut milk to the mussels and toss well. Season the sauce to taste with salt and pepper.
Place the mussels around the outside of four wide bowls. Place the bok choy and snapper in the middle of the bowls.  Pour the sauce over the fish and mussels.  Garnish with the cilantro and serve.