Note:
I've been nominated for Babble's Top 50 Food Blogs. I've moved from 197 to spot 31, but I sure would love make it into the top 30!   Could you take a minute and add your vote?   Click here or on the side link to the right.
Thank You! 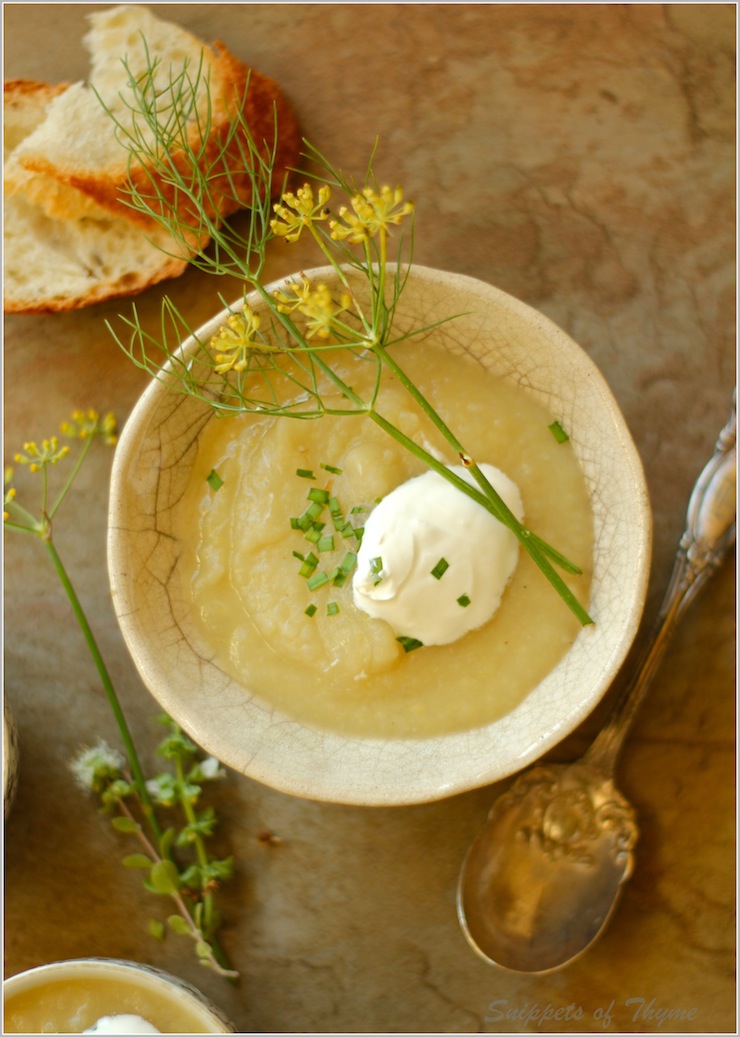 Our first magical night in the countryside of Dublin...
involved soup.
We arrived at the tiny portside town of Kinsale in southern Ireland.  What a jewel of a little village.  We didn't have reservations anywhere but after glimpsing the The Old Bank Hotel we hoped they would have rooms available.
One of the wonderful aspects of traveling off season is to not plan out every night of our travels so that we can hopefully come upon unplanned surprises.
Kinsale, the old inn, and a night out listening to Irish music was just the unplanned surprises we hoped for. 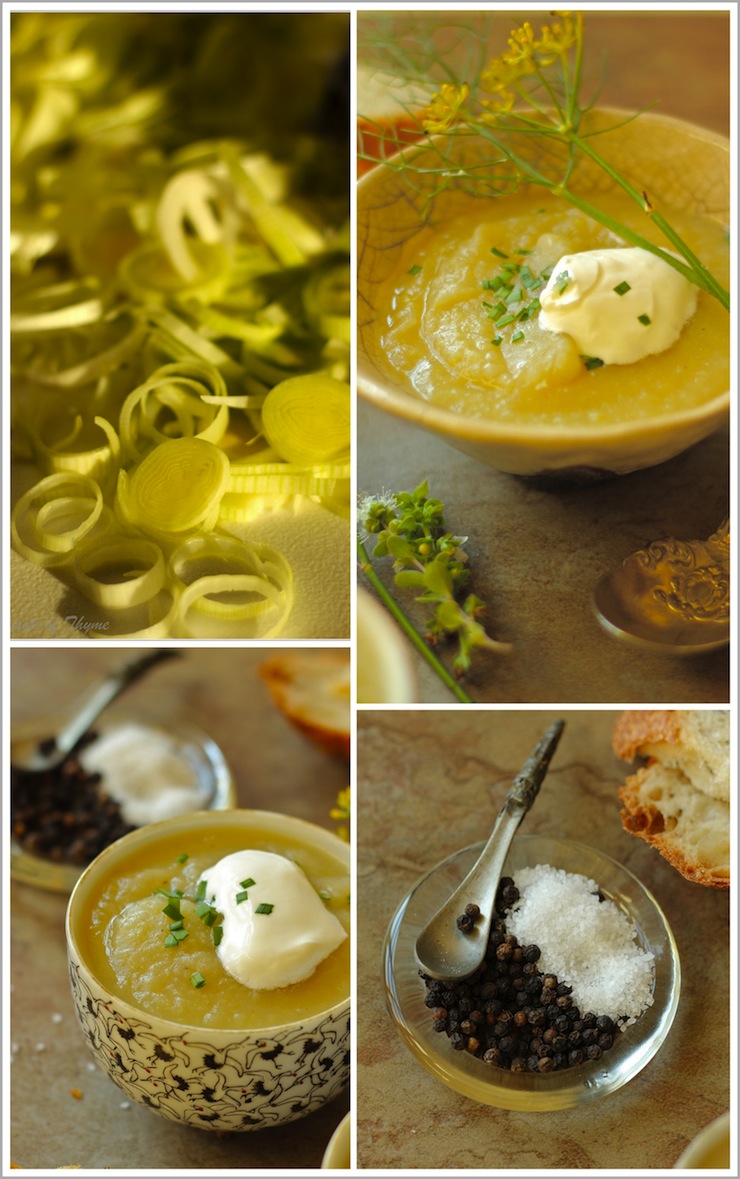 After securing our lodgings for the night, the kids were exhausted so we left them at this charming little Kinsale inn.
The sweet girl who checked us in told us there would be a group playing traditional Irish music at a local pub about a block away. 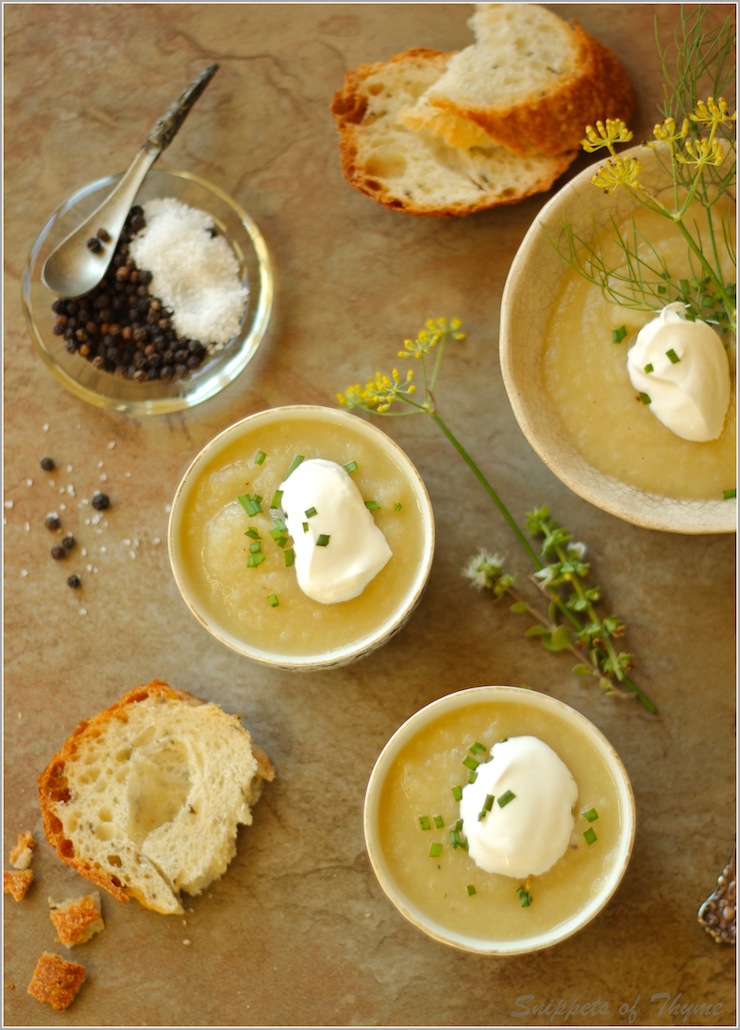 We weren't hungry for a huge meal so I ordered a potato and leek soup.  Oh my, I was in for an unexpected treat.  It was  delicious.  I knew I would be trying to recreate this soup once we returned.
So here it is...Irish Potato and Leek Soup
Right there in my new Irish Pub Cooking book was a recipe for this delicious and very simple soup.
We spent the evening listening to the most beautiful traditional Irish music.
What I enjoyed most was the passion seen and heard in the voices of the musicians.  Many "locals" were in the pub on that Monday night and we could hear them softly singing many of the tunes together.
Simply put...it was magical. 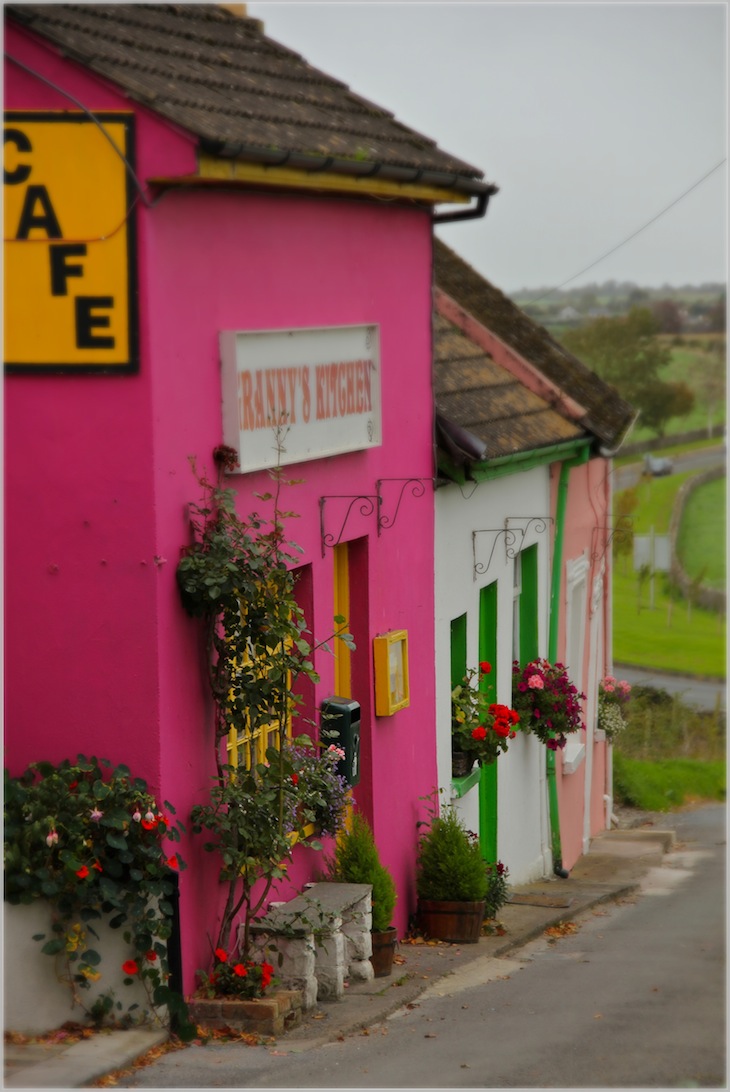 Before we had our wonderful evening in Kinsale with that lovely potato soup, we stopped at the ruins of The Rock of Cashel in the heart of county Tipperary.


This little row of houses nestled at the bottom of the huge rocky hill  captured more of my attention than the  ruins themselves! 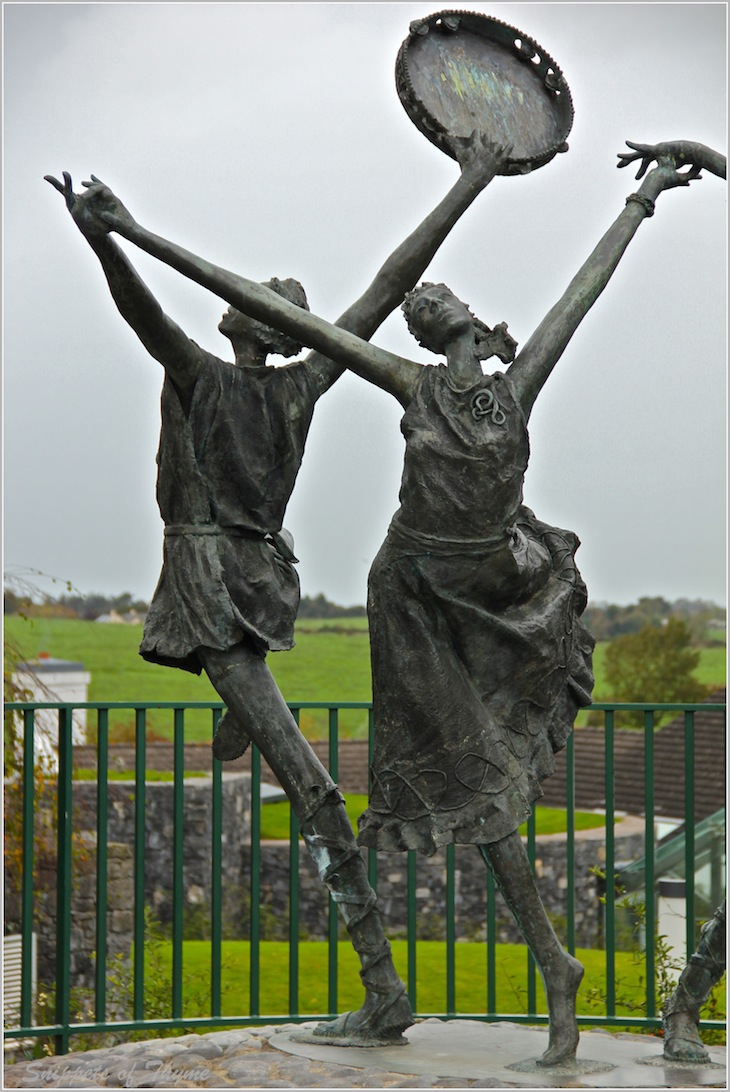 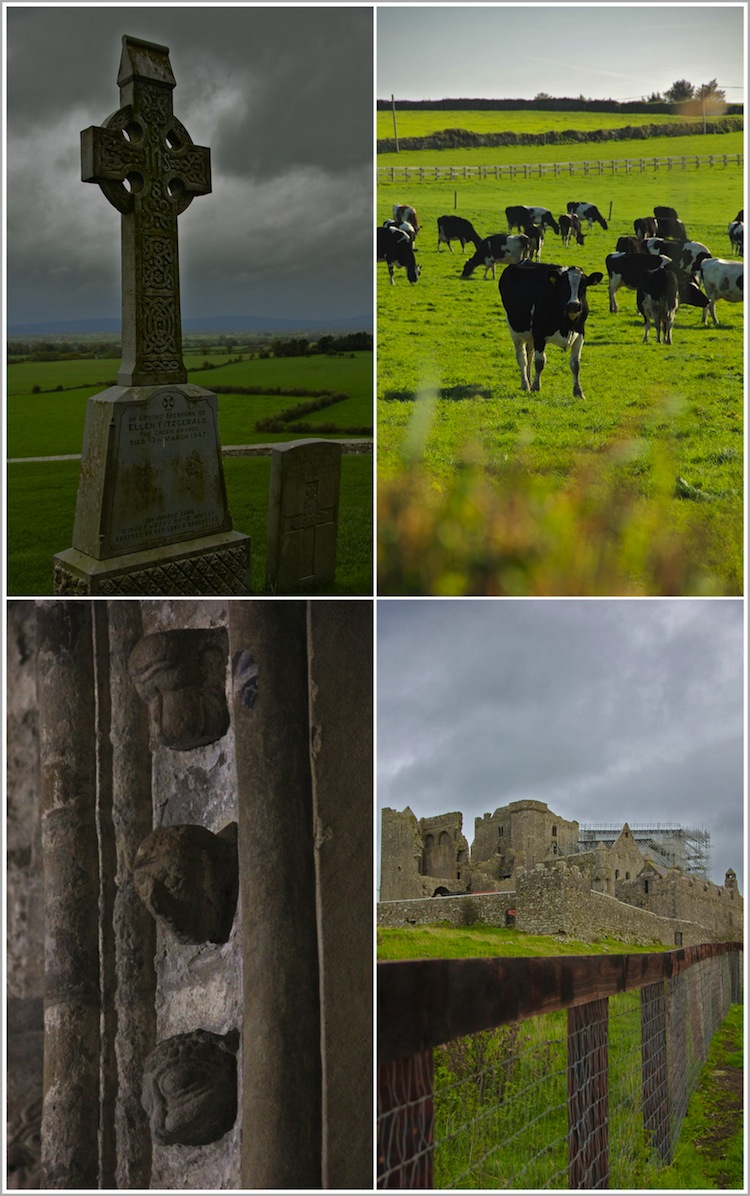 The ruins are majestic indeed.  The story behind this medieval site is engaging but my mind continuously wandered to those lush green hills and sweeping grey skylines outside.


Finally, I snuck away from the tour and went off by myself down a little road on the side of the rock. 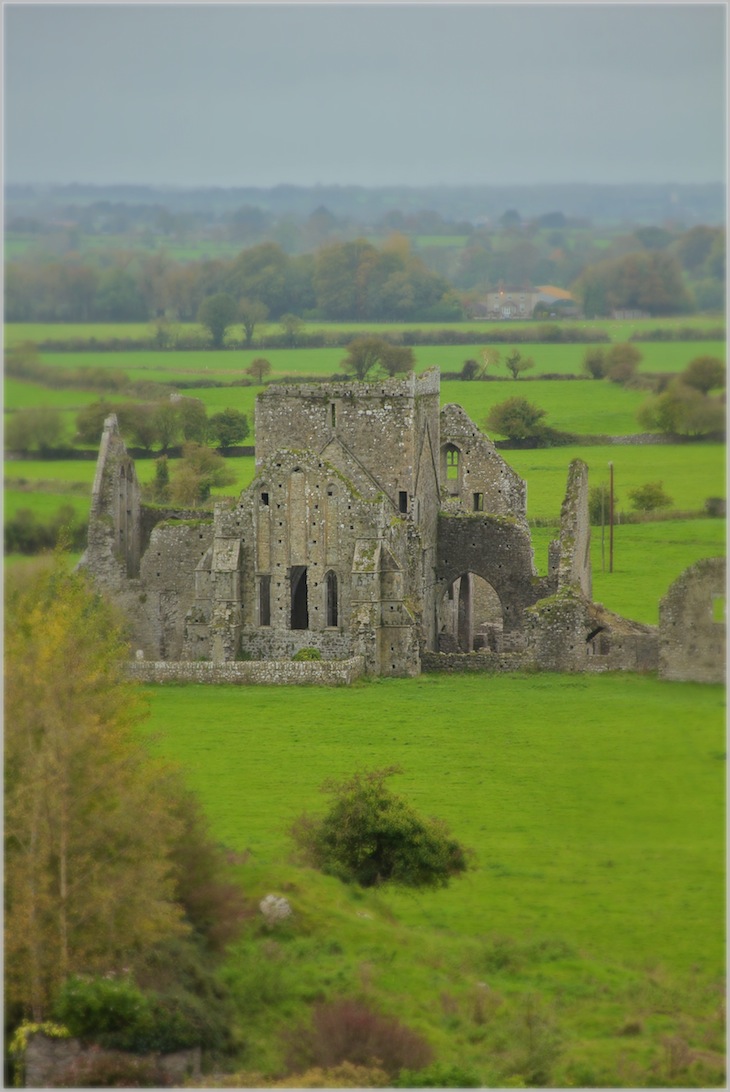 Walking blissfully down this tiny path, shuffling big crunchy leaves and peering at the cows in the field next to me, I came upon this surprising scene in front of me.


I later learned that this is the ruins of the abbey of a Cistercian monastery.  It was a stalwart site and  such a masculine structure amidst such a pastoral landscape. 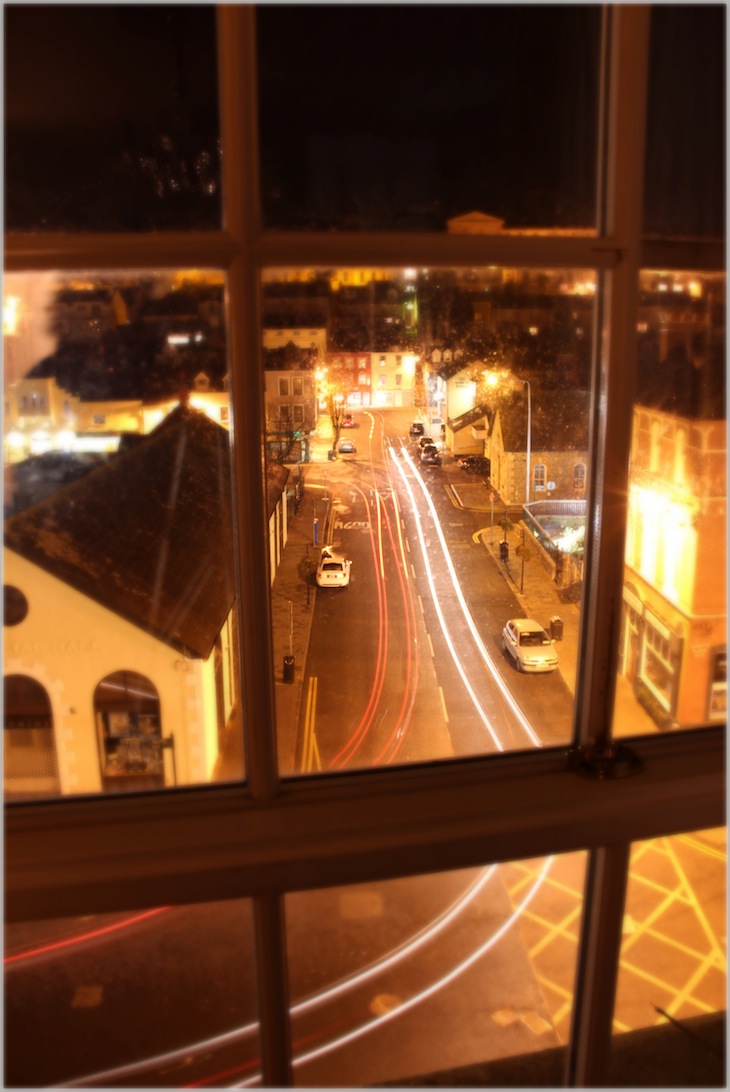 What an enchanting first day in the countryside of Ireland.  After our first fill of the Irish countryside, a night out at the pub in Kinsale, that delicious heart-warming potato and leek soup,  our hearts were filled with the echoing sounds of Irish music.


We meandered slowly back to our cute little inn as the town was settling down for the night.

We arrived to a sleepy little town ready to end its day but by the next morning people were bustling about and the mood was gay and jovial.


I have a fascination with grocery stores in foreign countries.  I realized our little inn was right next door to a little market.


I knew I was going to wake before dawn and head straight to the harbor and watch the sunrise...and then wander the aisles of the market looking at the varying products. 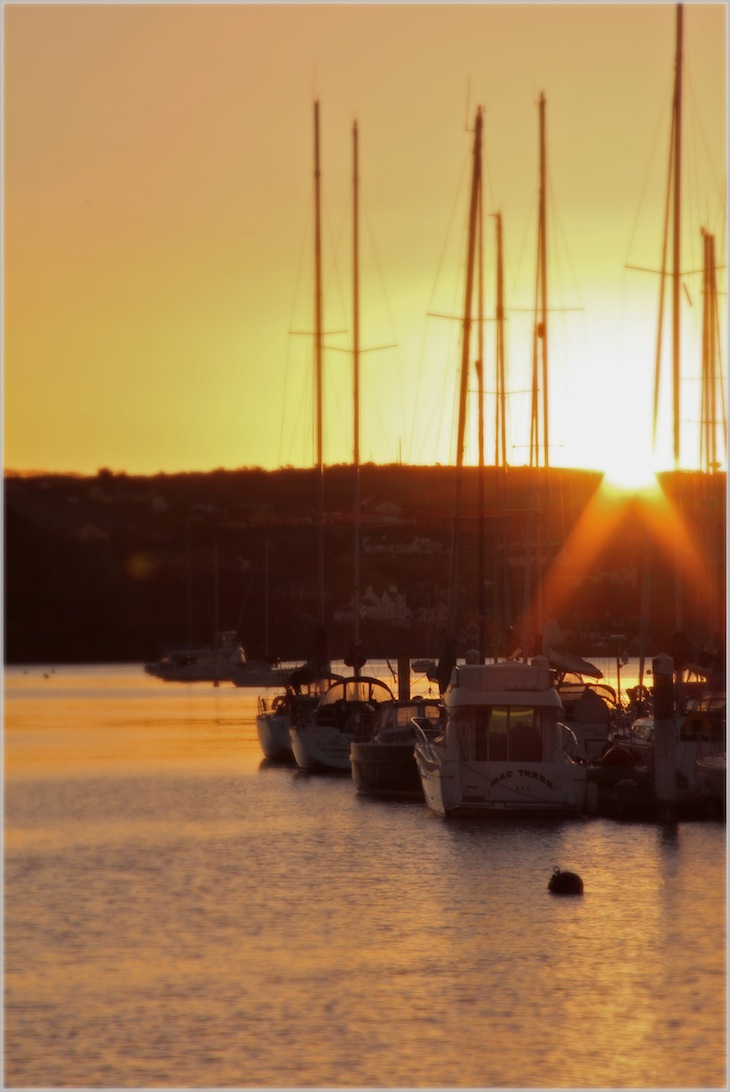 There is nothing like being at a harbor when the sun first slips its soft rays onto the water.  The smoky greys that permeate the landscape minutes ago become soft purples and smooth pinks.  The little boats bob up and down catching the sun's rays as the birds belt out their morning greetings. 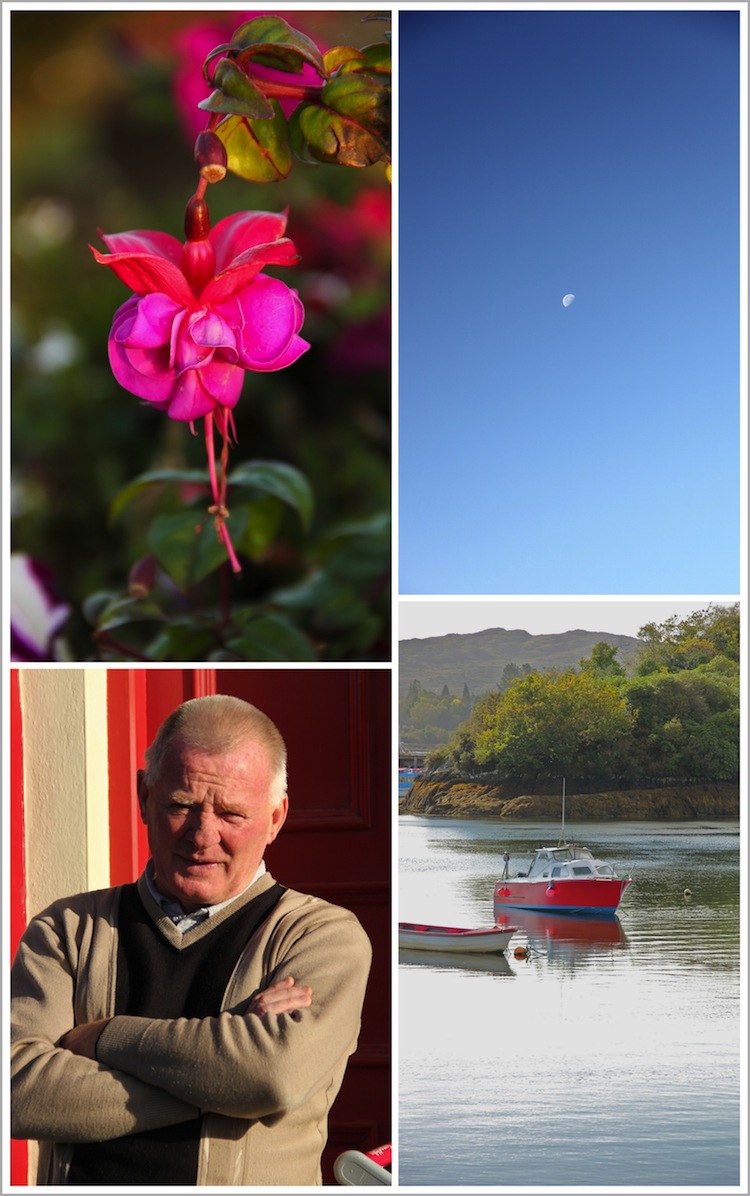 Quite reluctantly, we packed up and said goodbye to Kinsale and headed off on our coastal drive.  If today was anything like the day before, we could only imagine...


We drove until early afternoon, completely delighted and entranced with the scenery that lay itself before us.  Up and down lush green hills, windows down, breathing in the crisp fall air, until we came to another town that beckoned us to stop for a bite to eat...


Kenmare, a little village at the foot of the Cork and Kerry mountains and just south of the breathtaking Killarney National Forest. 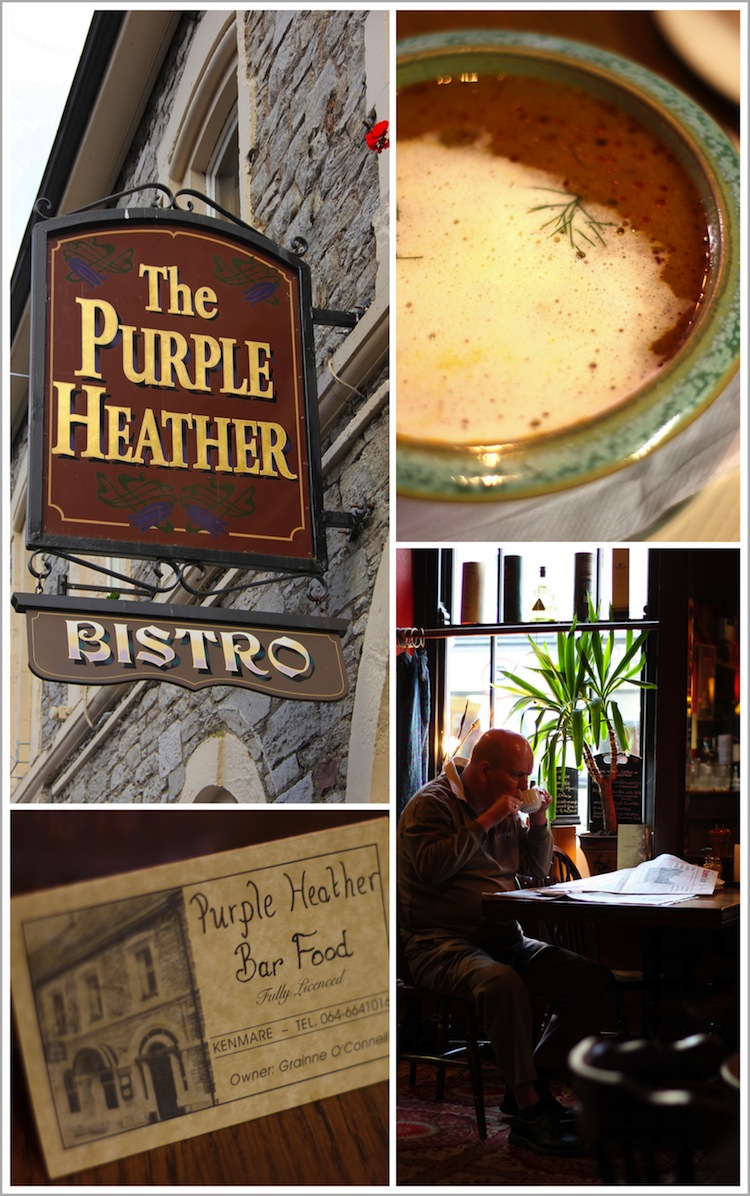 My favorite travel guide is Karen Brown's World of Travel.  She recommended a stop at a little pub called The Purple Heather


I had a delicious bowl of seafood soup with earthy thick brown bread.  Every spoonful was filled with chunks of crab claws, potatoes, and seafood in a deeply flavorful and satisfying broth.


Stay tuned, because I think I have a recipe and will be making this soon. 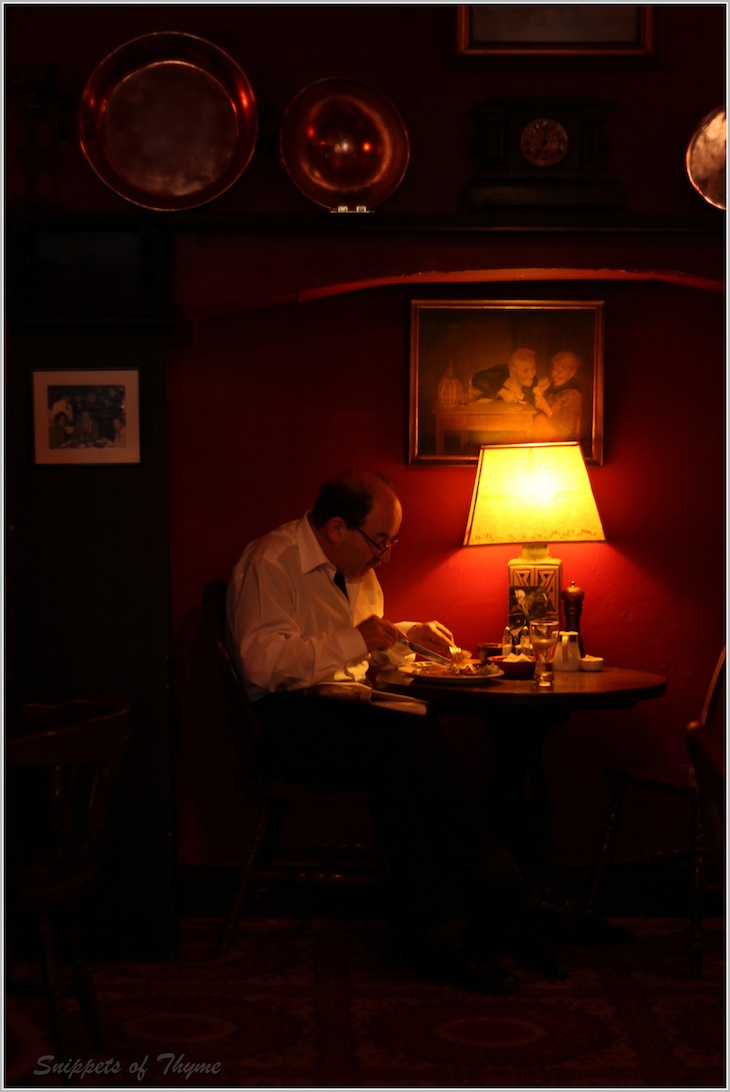 My family often chides me for becoming completely lost in other people's worlds...especially in restaurants.


I just loved watching this man sit blissfully in this softly lit nook and completely enjoy his meal.  Wouldn't it be lovely to be tucked in there while having a relaxing rest from the day? 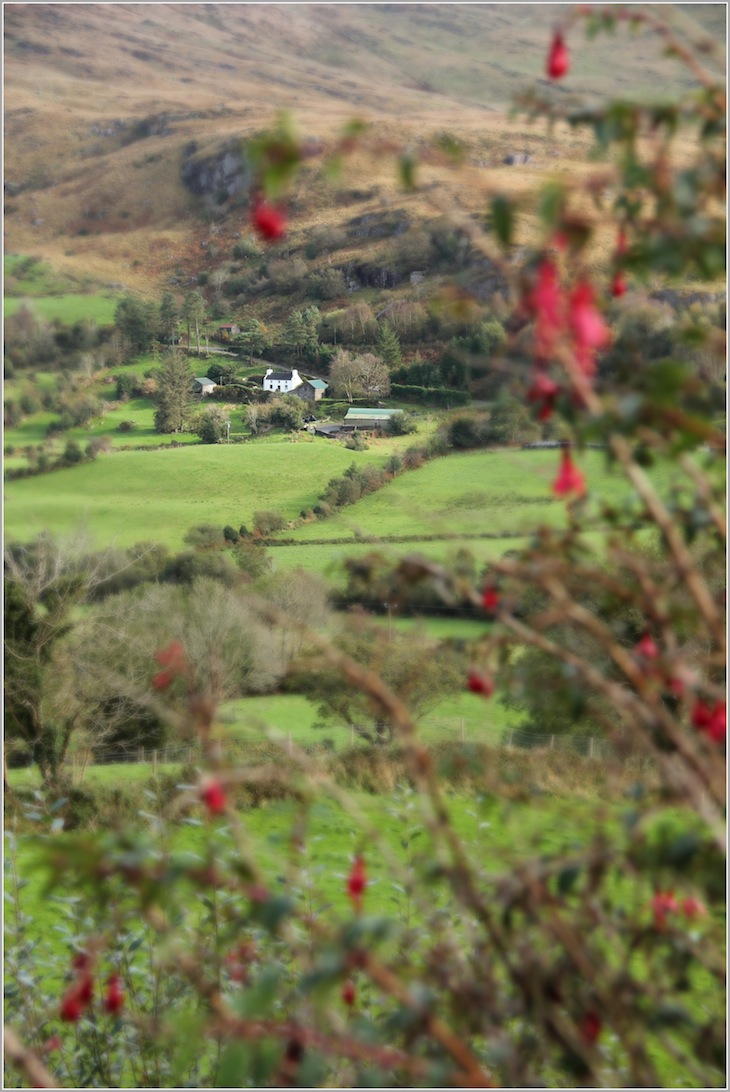 Like I said, we tend to "wing it" for parts of our travel and embrace the unexpected.  What I mean is we really had no idea how captivating the drive through the Killarney National Forest would be during our afternoon drive.


We knew we were headed to the Dingle Peninsula.  How we arrived there basically was determined by whatever sights pulled at our senses. 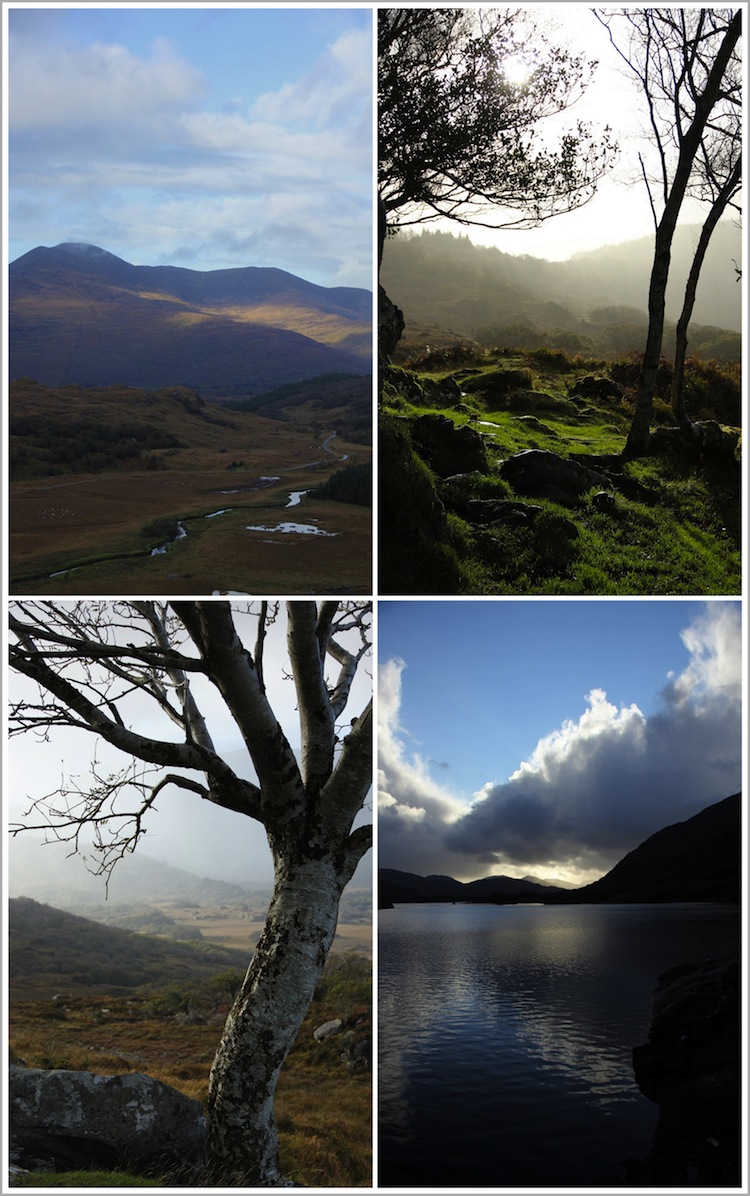 We were approaching late afternoon but tried to take in every drop of this beautiful landscape.  We decided that we would return to this area in the next few days when we had more daylight because it was mesmerizingly beautiful.


Killarney National Park!  Not to be missed while in Ireland! 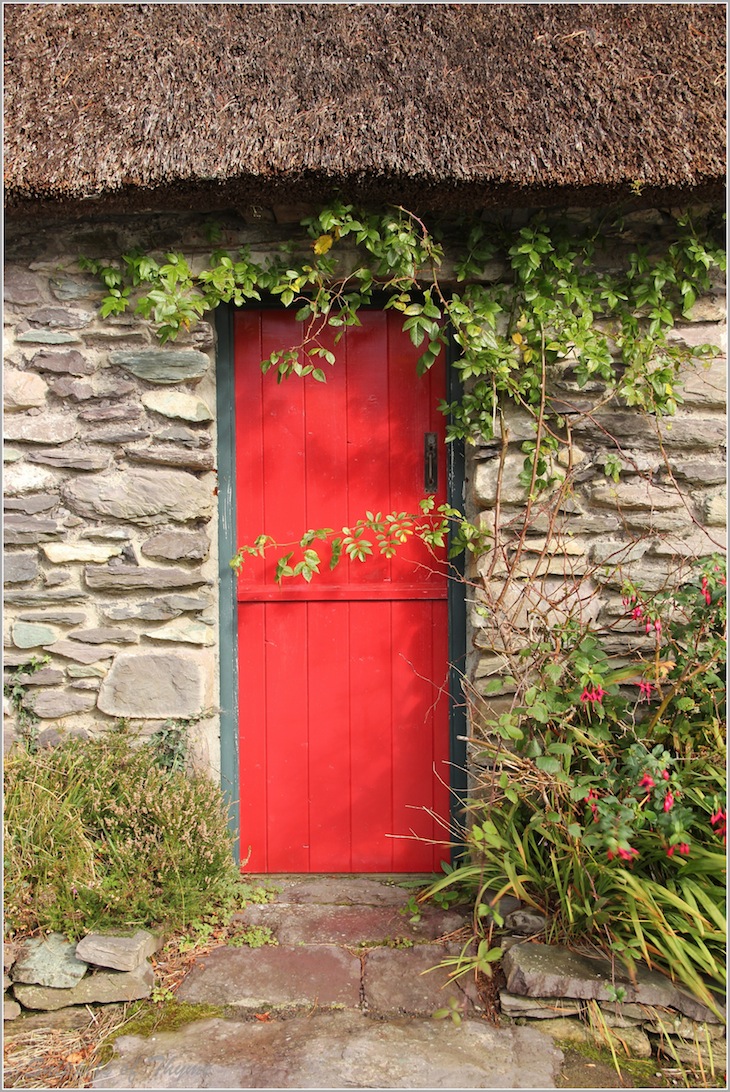 Indeed, if I knock on this door, I half expect that Bilbo Baggins would open it up  and invite me in for a cup of tea.  But, I have no interest in that accursed golden ring.  No thank you!  Just a delightful relaxing cup of tea with Bilbo himself. 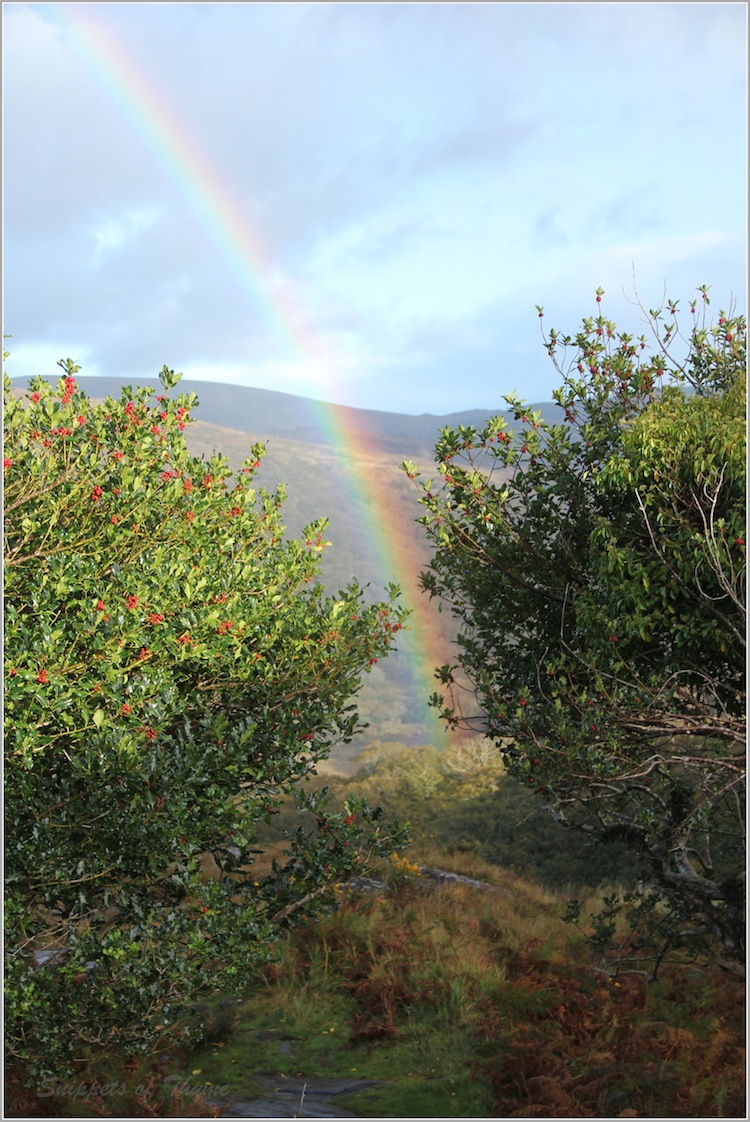 With all four of us gasping at the very same moment, we were probably a comical site in the car.  I mean, really, REALLY!!


This unbelievable rainbow appeared around the bend in the road.  Poor Patrick was getting used to whisking the car to immediate stops near rocky edges of steep hills nearly every five minutes.


We stopped.  We gaped.  We tried to absorb this huge rainbow softly flowing over the valley below.


At this rate, no wonder it takes forever to arrive at a destination in Ireland.  There is something to stop and delight the senses around every turn.


Could the luck of the Irish be with us on this trip?


Just wait...the Dingle Peninsula is next!  It will be our base   for the next four days.


Melt the butter in a large saucepan ver medium heat, add the onion, leeks, and potatoes, and sauté gently for 2-3 minutes until soft but not brown.  Pour in the stock, bring to a boil, then reduce the heat and simmer, covered, for 15 minutes.


(Snippet's Notes:  the photo of the soup in the cookbook is green.  My soup is creamy white.  Some of the green of the leek must have been used to give it this color)


Transfer the mixture to a food processor or blender and process until smooth.  Return to the rinsed-out saucepan.


Reheat the soup and season to taste with salt and pepper.  Ladle into warmed bowls and serve with the cream (Snippets Notes:  we used sour cream), if using and garnished with the chives.