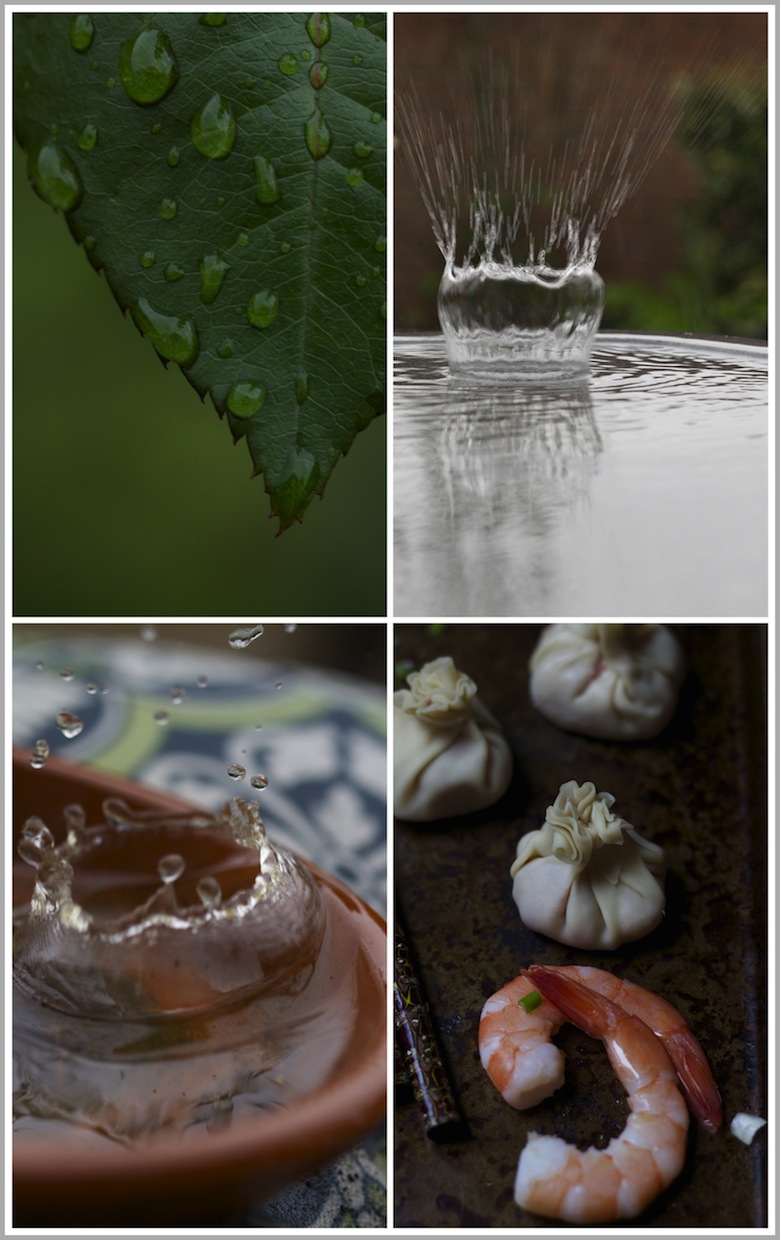 The Chinese "Year of the Dragon" decidedly roared into 2012 with a vengeance equal to that of the mighty beast.


The clouds hulked low to the ground, dark and ominous.  A copious build up of sky amassed giant and powerful and before Houston knew it, thick bulbous drops scattered all over the city. 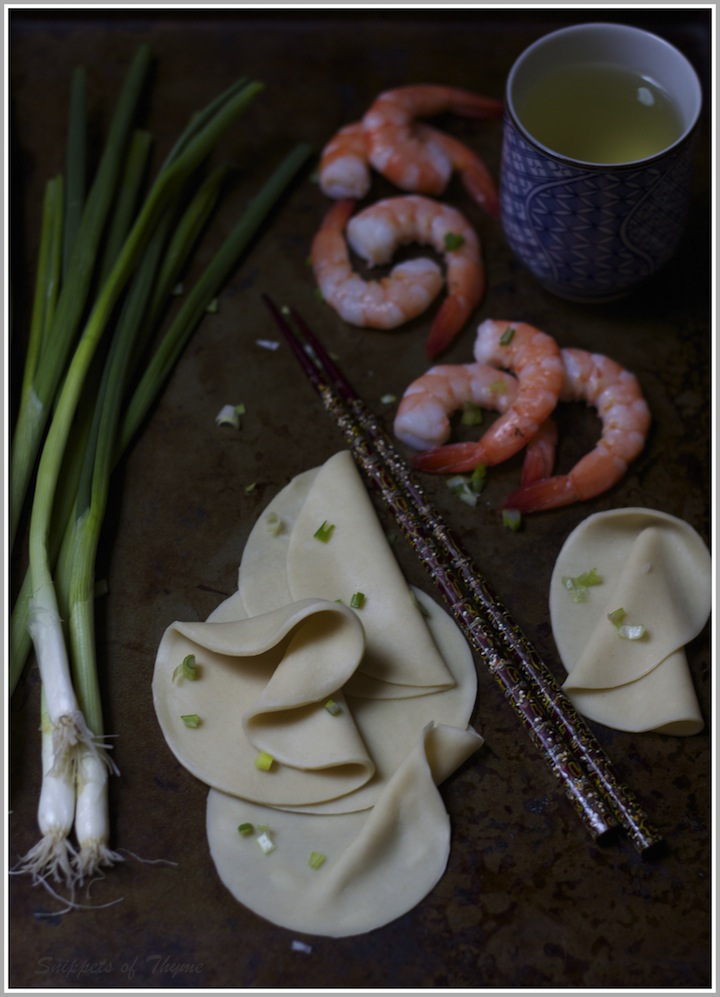 I imagined all of the dispirited children peering out their windows wondering disparagingly if they would miss out on the rousing 'dragon dance'.


And then there are the stimulating fireworks to either look forward to with brave anticipation or to fret over in nervous expectation. 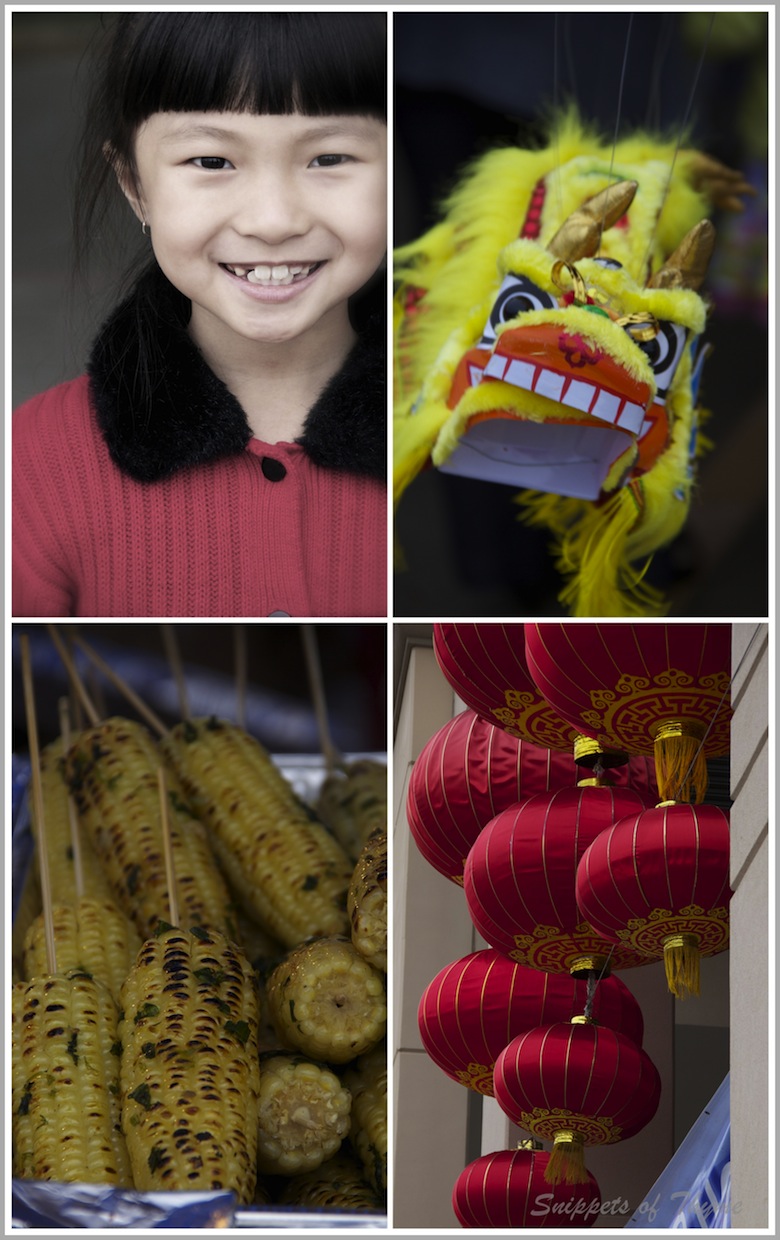 At our house it was Riley's turn to pick out the 'soup of the week' from my big soup cookbook.  Fortunately, he decided upon Won Ton Soup.  How fun and coincidental since the Chinese New Year's ceremonies were this weekend.


Unfortunately, the weather decided to influence the celebrations, bringing forth the 'Year of the Dragon'  by rolling out a downpour that began early Saturday morning. 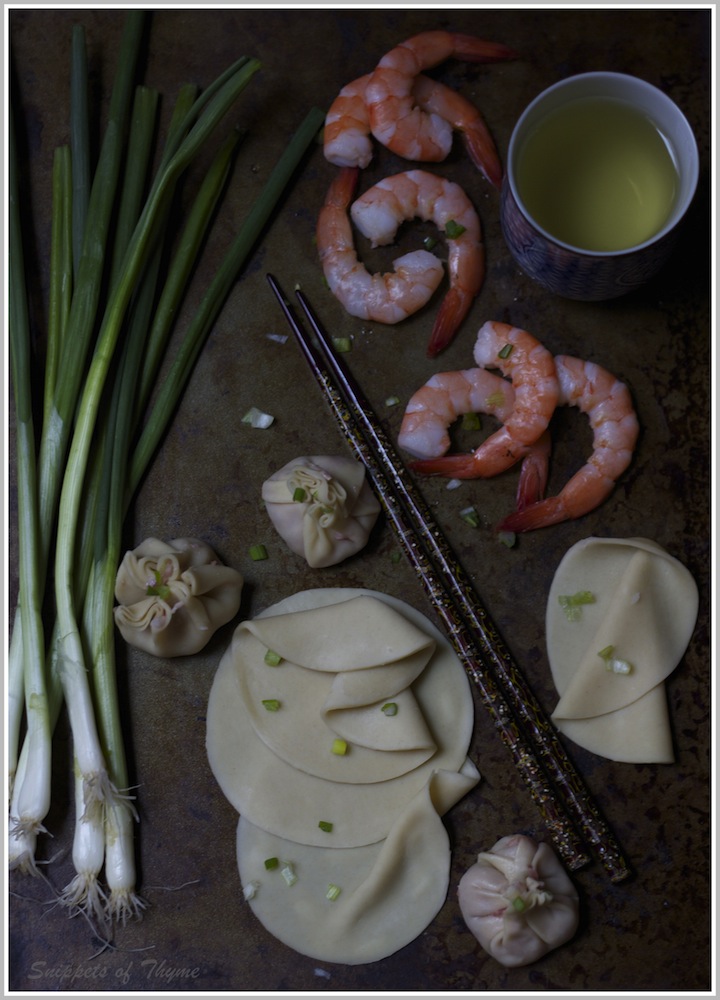 The skies remained dismal and grey throughout the course of the morning.  However, by around early afternoon, the pelting drops of rain quit their assault, families piled into their cars, and celebrating was underway for thousands of Chinese-American families. 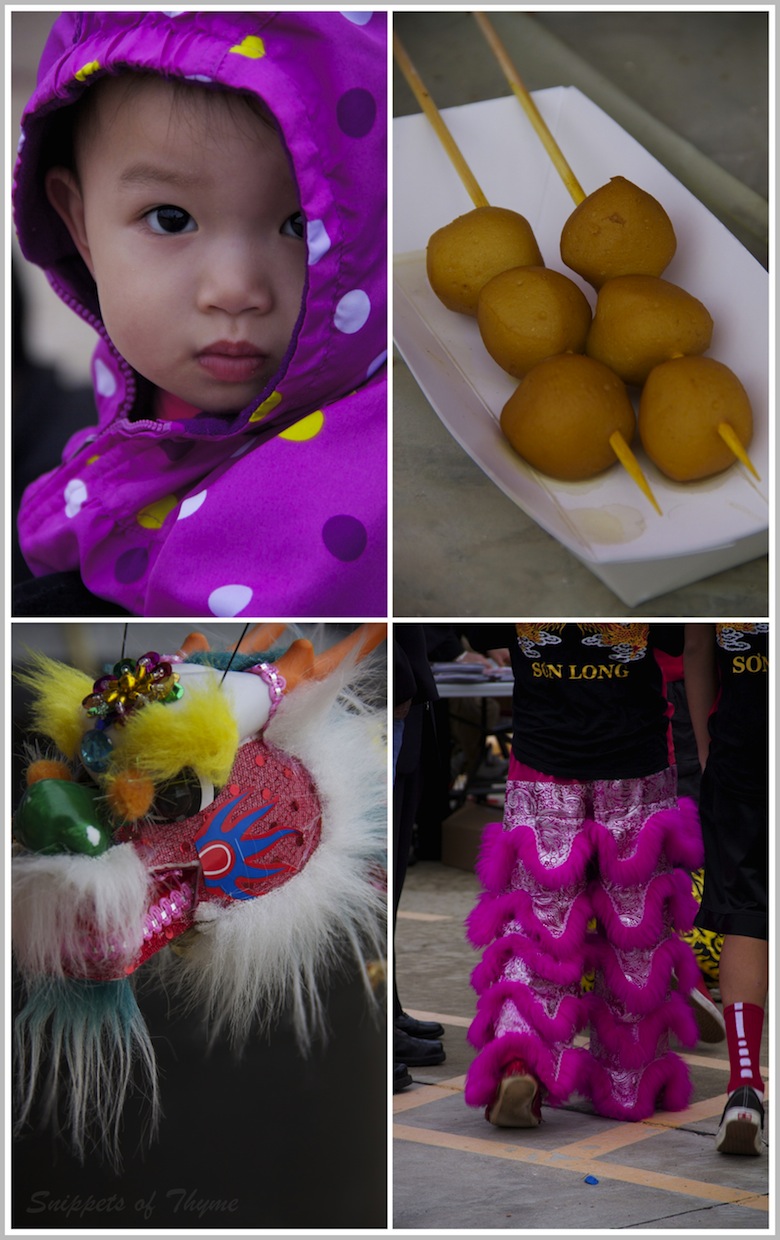 Children had to be wrapped up a bit more than usual for this area of the country.  The parking lots were filled to the brim, music rang out, and performers  queued up in bright costumes for their turn to celebrate and perform traditional Asian dances for everyone to enjoy. 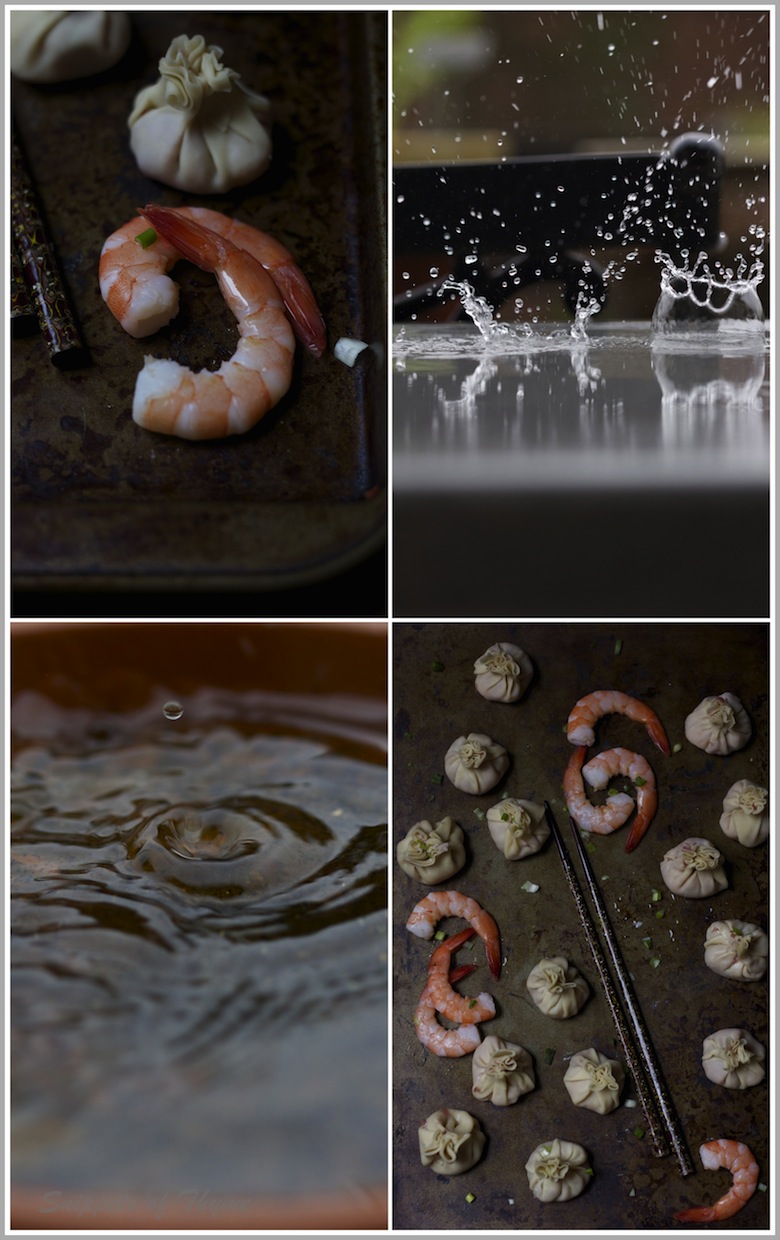 Kendo is a modern martial art of sword fighting based on the traditional Japanese swordsmanship.  My kids enjoy reading Japanese Manga and they both commented on being familiar with Kendo from their Japanese stories. 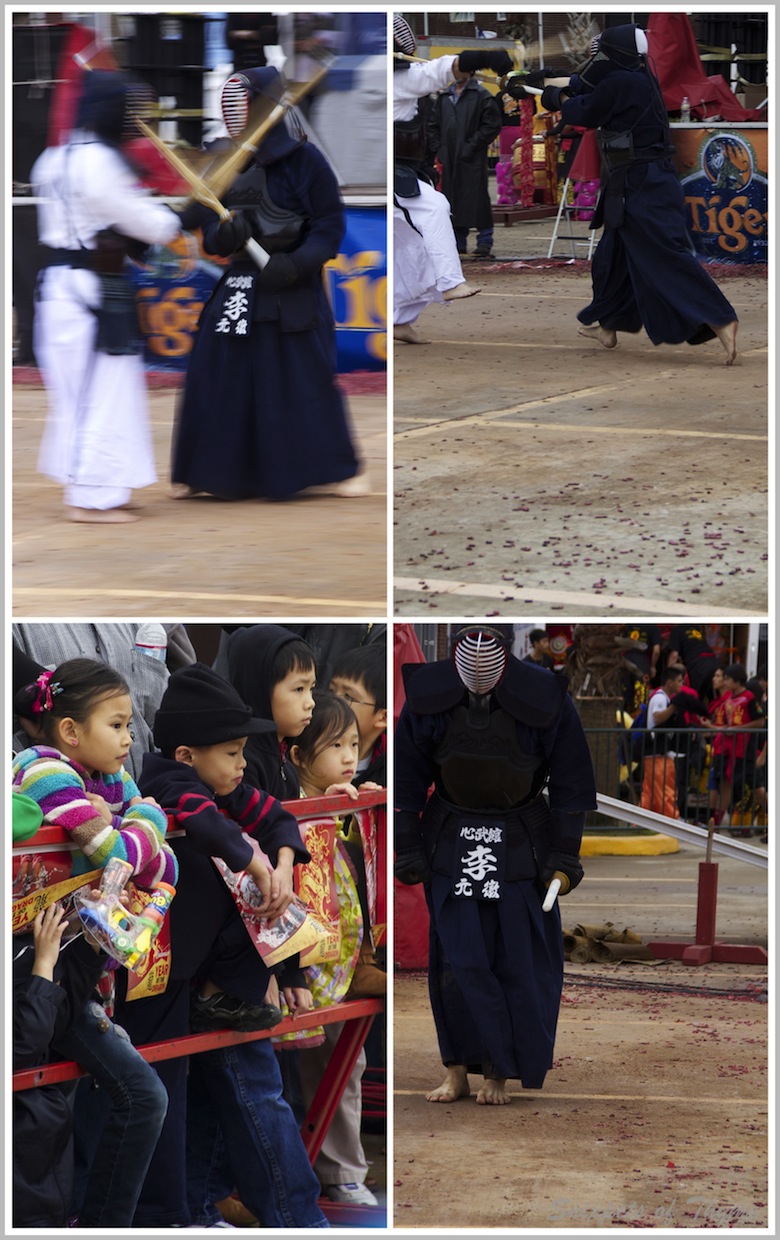 All along the railings children, dressed in the Chinese colors of red and black, watched eagerly as the performers  clashed their heavy wooden swords in mock combat. 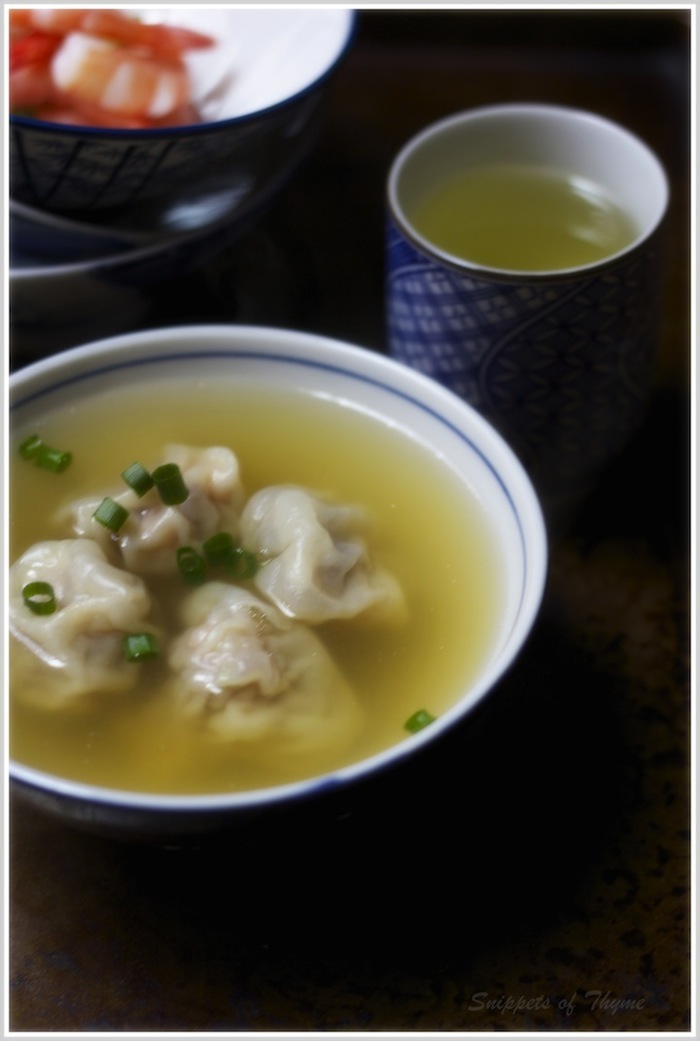 My wontons were assembled earlier in the day and I thought of how this steaming, hot, brothy soup would taste after hours spent in the chilly festival air. 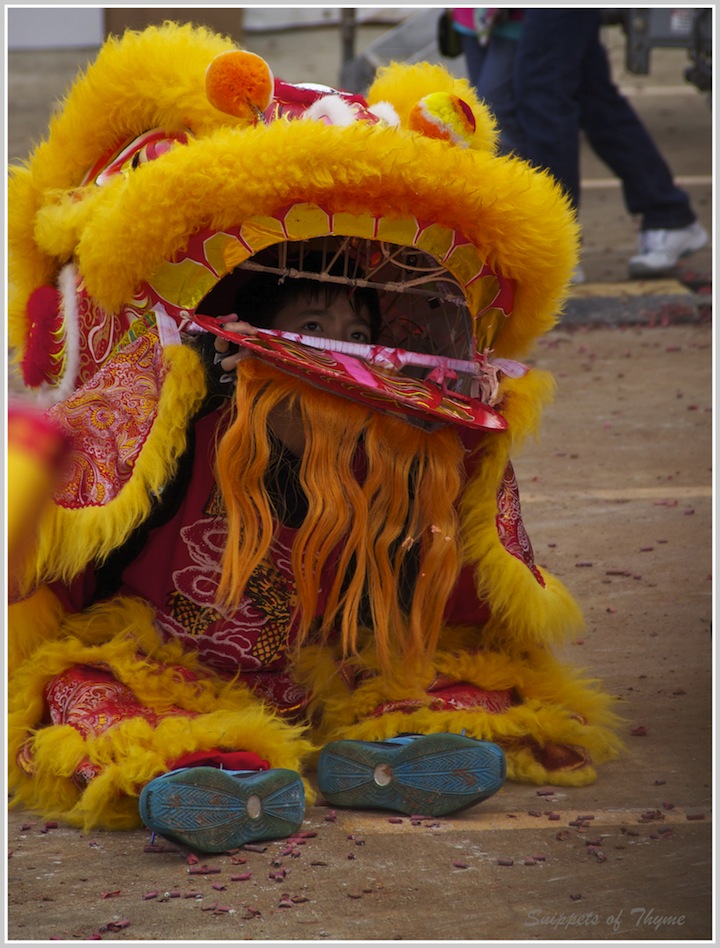 The 'Dragon Dance' is the highlight for all of the children.  When the first sounds of the dance began, children scurried forward in excitement weaving their way to the front of their parents.  The children's little faces were sparkling with anticipation of the possibility of touching a dragon's face.


Eager little hands boldly reached out their dollar bills to the dragons.  Shrill little voices beseeched the dragon to lumber over to their outstretched hands.  Once he did, however, they shrieked with fear, cowering together but with delighted grins on their faces. 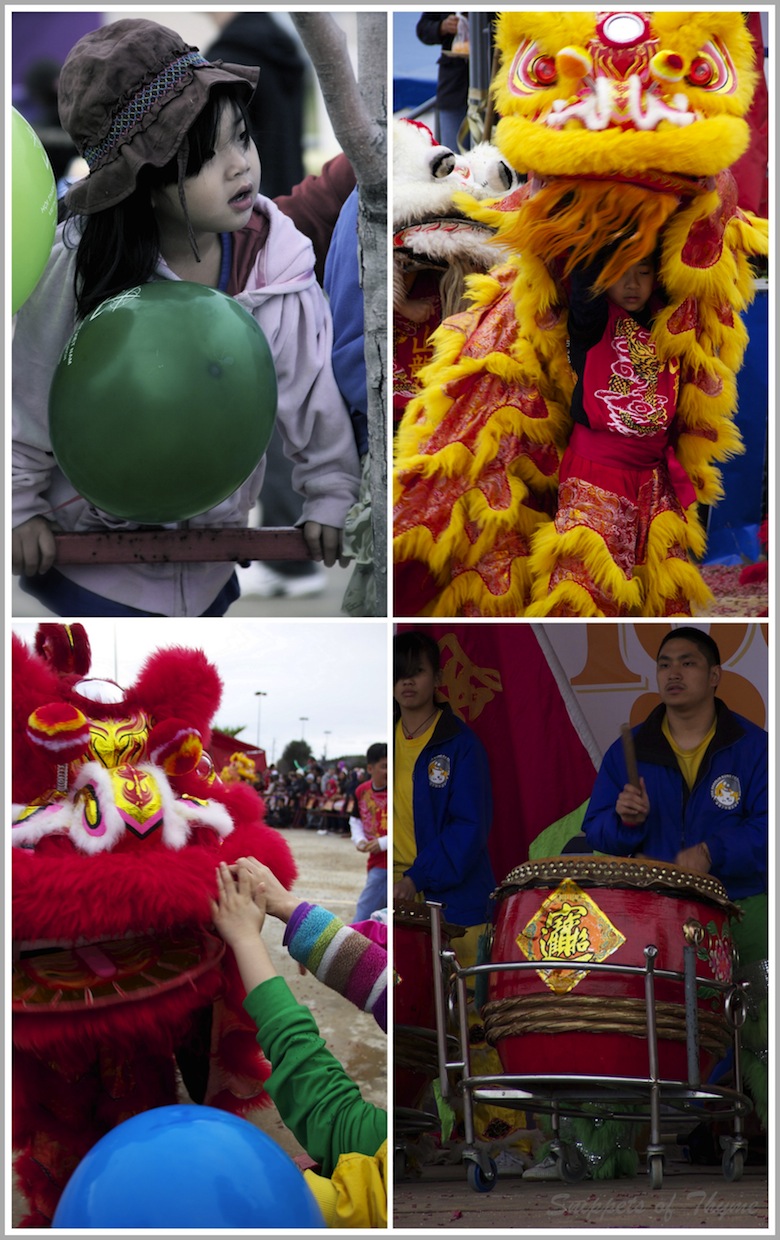 Parent's and grandparents chuckled with satisfied amusement at the over-excitement of all of the little ones.  Possibly they were conjuring memories of their own and how they reacted to such a spectacle in their youth.


The dragon dance must appear colossal to young children.  I would imagine the bright, clamorous action-packed performance leaves quite an impact on the memories of youngsters. 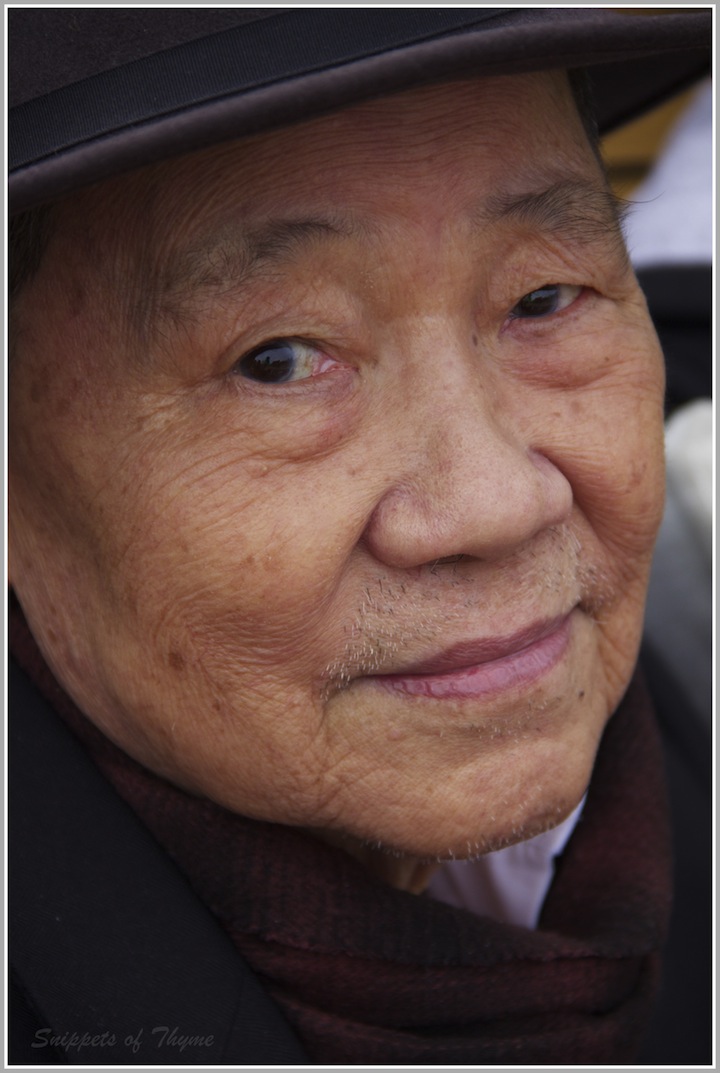 My eyes went straight to this elderly gentleman.  How handsome he was dressed in his plaid scarf and 20's style felt fedora hat. His eyes twinkled with amusement as the children squealed in delight.


I wonder how old he was if he came to America from Asia, why he came, and if he did come from China~ if he misses the Chinese New Year celebrations of his childhood.


Needless to say, I possess quite the active imagination when I see anyone who has experienced and lived through the first half of the 1900's. 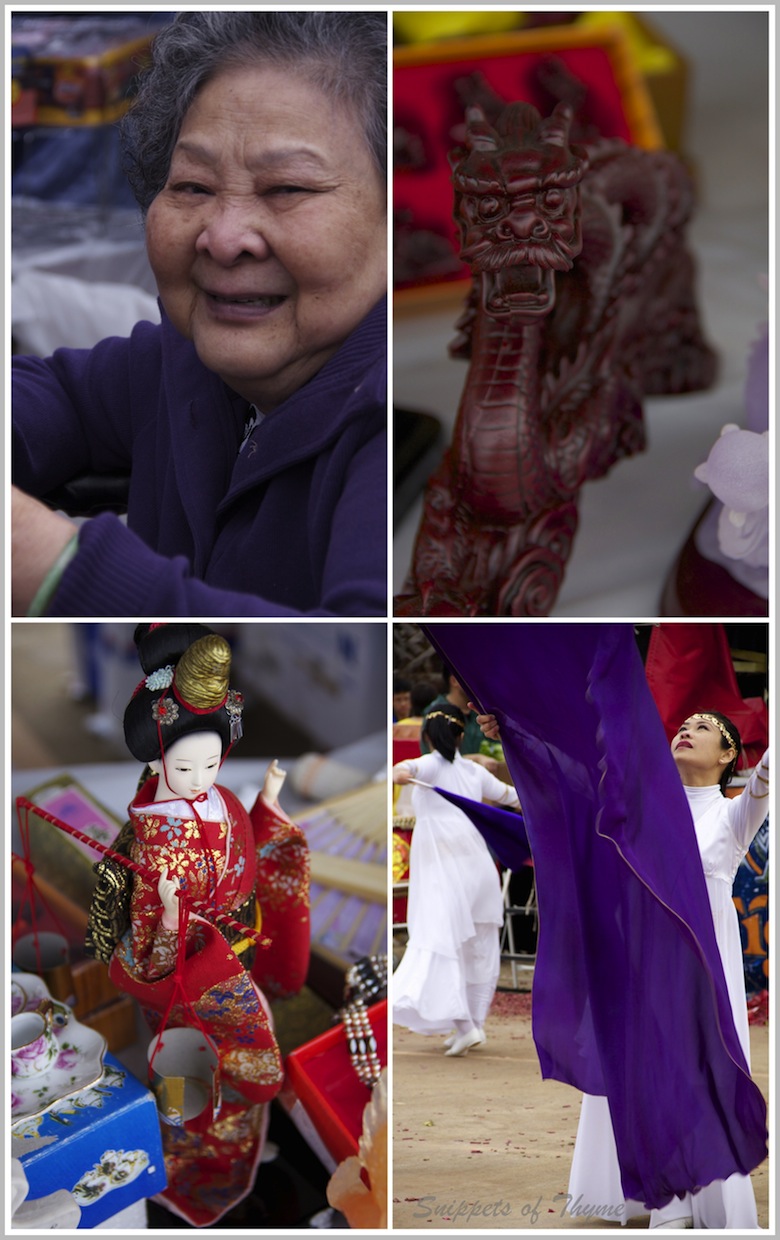 All sorts of baubles and trinkets were lined up beckoning to the children for attention.  The most popular item held in the hands of many of the little ones?


Yes! bubble-makers were entertaining children right and left.  While the performers were twirling and gliding across the stage, the children were blowing soft translucent bubbles that floated daintily in the air. 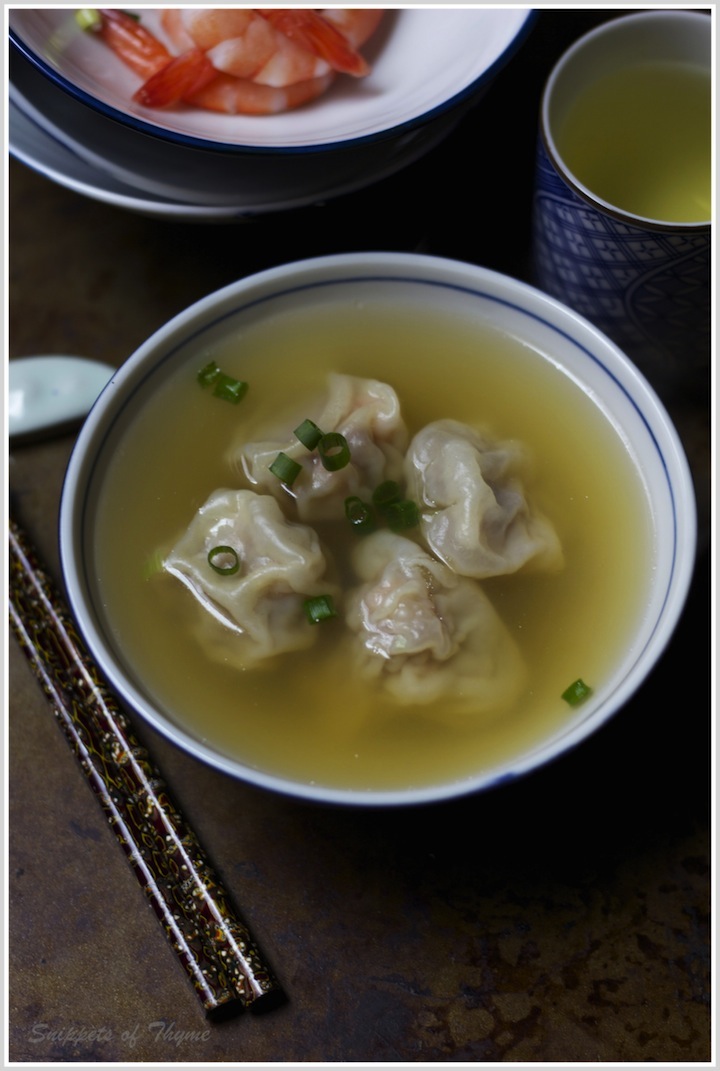 As the afternoon ran its course, the winds swept down low and chilled the air even further.  My mind began to turn again to a big bowl of steamy wonton soup waiting at home.


The rain stayed at bay, however, and the revelers continued to soak up the festivities with anticipation ~ of the fireworks! 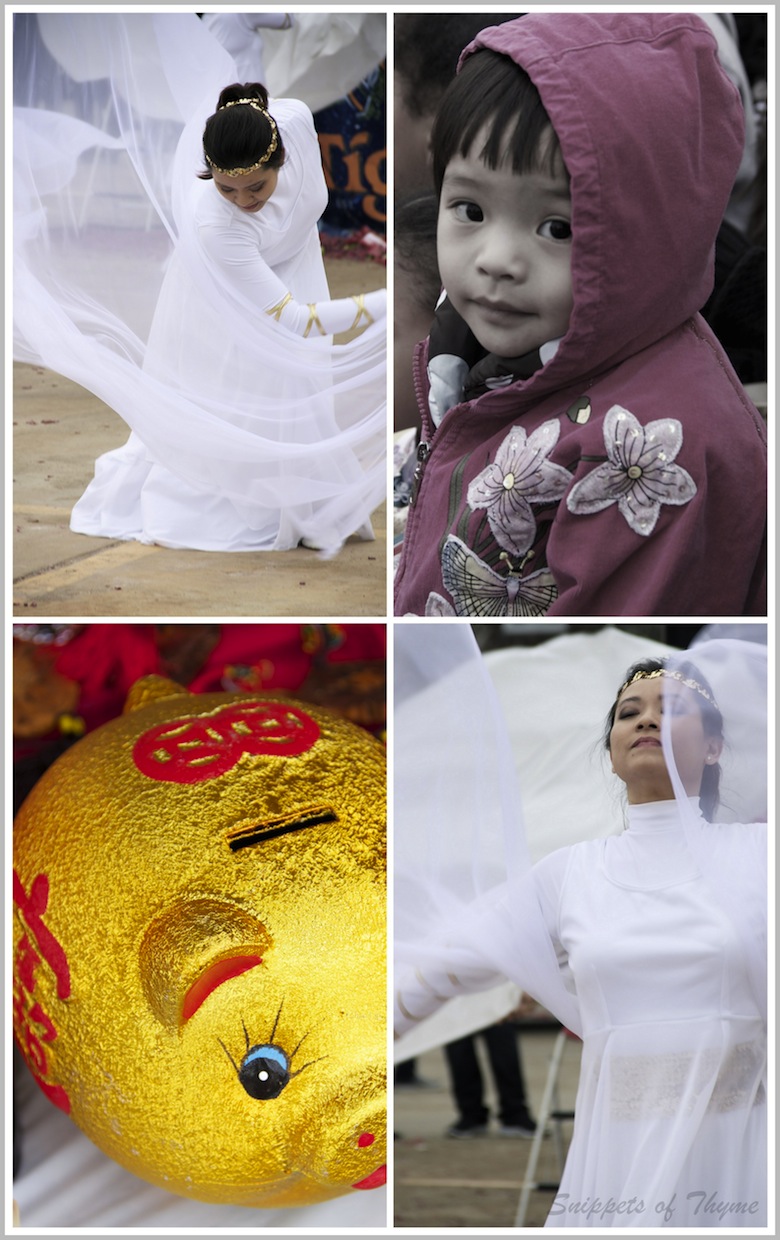 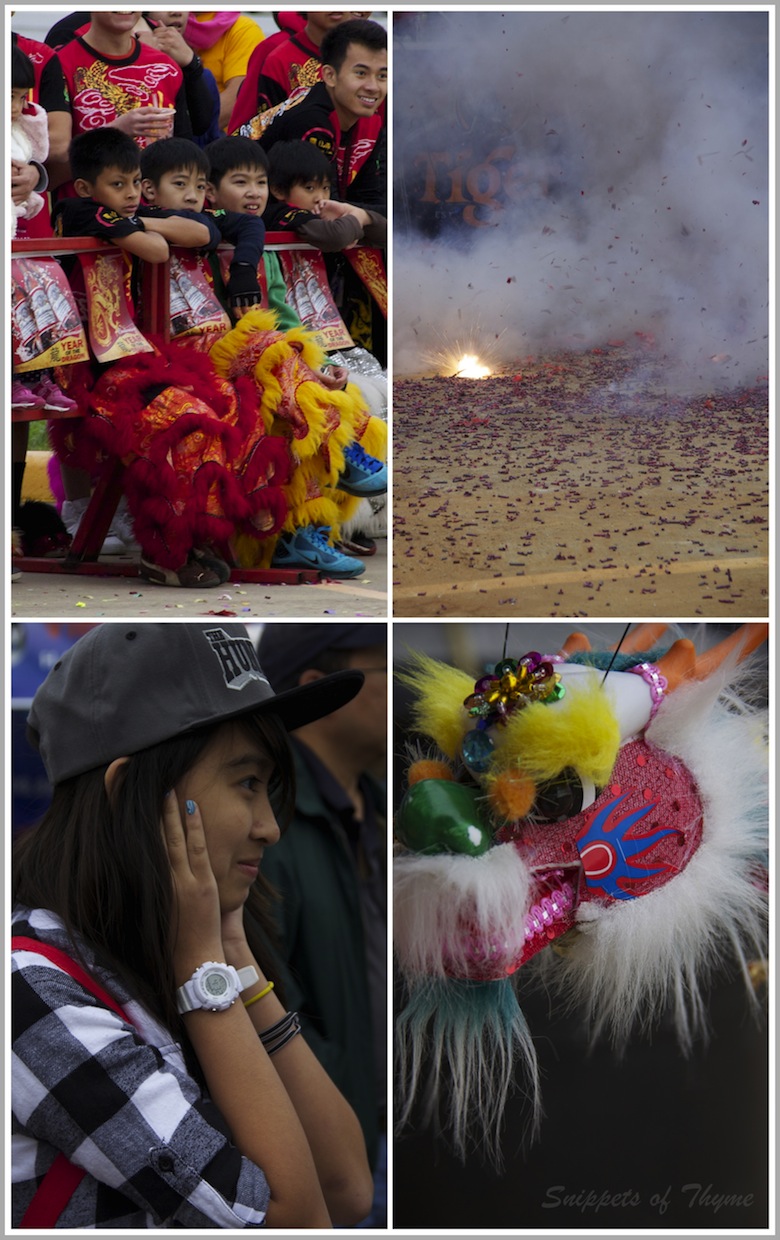 Kids lined up eagerly once more to hear the deafening crackle of fireworks that were lined up all over the grounds of the festival stage area.


The sound of popping and hissing, fizzing, and snapping sputtered until almost everyone had their hands clasped over their ears.


The loud clamorous noise of fireworks are hoped to scare any bad spirits from lurking around from one year into the next.  Officially scared off, the new year can  begin with happiness and hopefulness for prosperity. 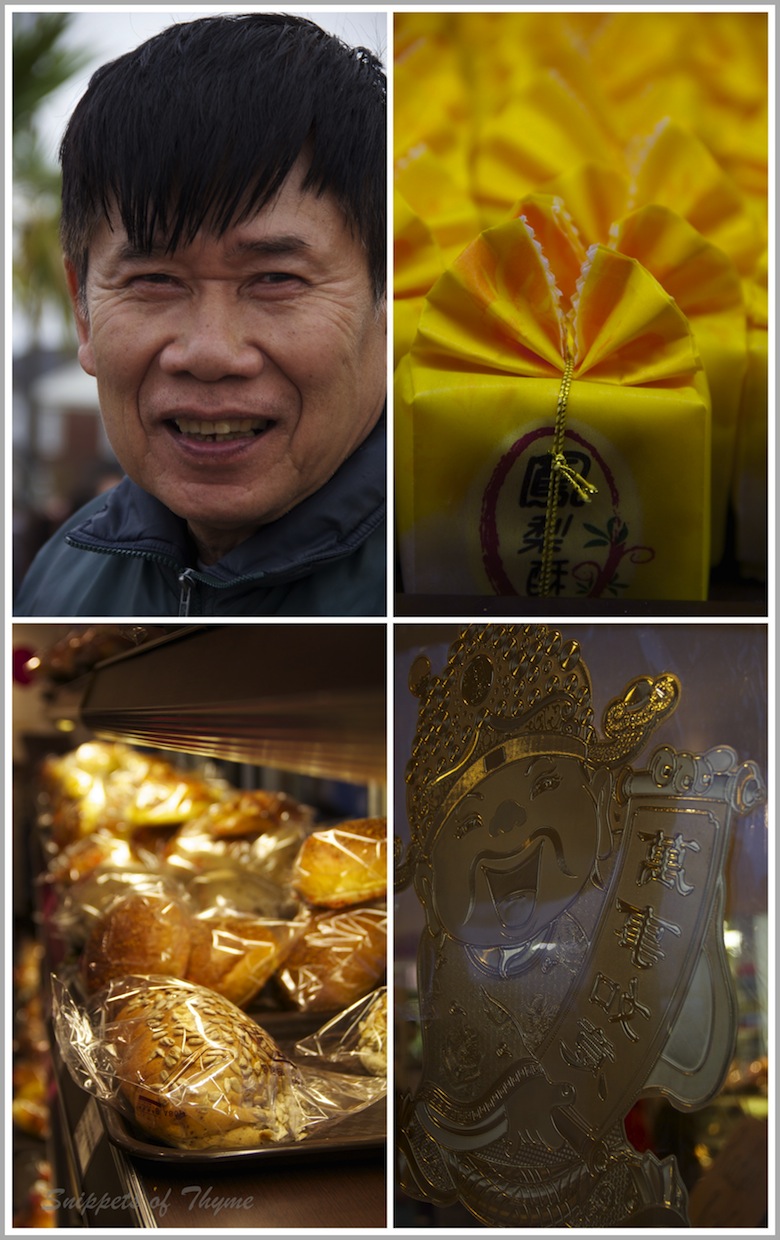 Festival food is always fun to see and sample.  I definitely noticed that several pastry shops were bubbling with eager consumers.  All sorts of pastries and cakes were laid out, wrapped in shiny paper, and ready for families to bring home as treats.


Most popular seemed to be anything on a stick.  Grilled corn on the cob, drizzled with butter and flavored with herbs looked delicious.  Served hot, this was a perfect snack for the chilliness that kept everyone bundled up. 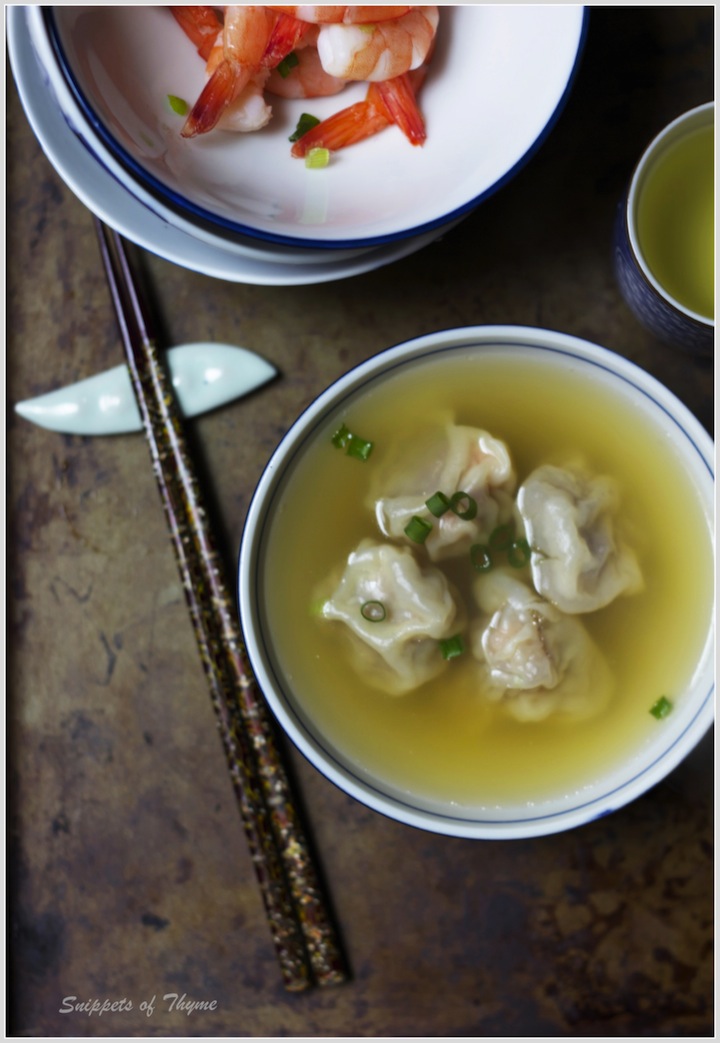 This was the first time experiencing Chinese New Year here in Houston.  Houston has one of the largest Asian communities outside of China and it was exhilarating getting a chance to experience their New Year celebrations.


We have enjoyed Chinatown in Tokyo, San Francisco, New York City, and Toronto.  Glad to add another city's cultural celebrations to that list.


Now off to warm up and sip on one of their delicious offerings to the culinary world. Chinese Won Ton Soup!


In a bowl, thoroughly mix the chopped pork and shrimp with the sugar, rice wine or sherry, soy sauce, scallions and ginger; set aside for 25 to 30 minutes for the flavors to blend.


Place about 1 teaspoon of the pork mixture in the center of each won-ton wrapper (Snippet's Notes:  use a spoon instead of your fingers...less messy!).


To cook, bring the stock to a rolling boil in a wok. (I used a regular soup pot).  Add the won-tons and boil for 4 to 5 minutes.  Season with the soy sauce (if desired) and add the scallions.