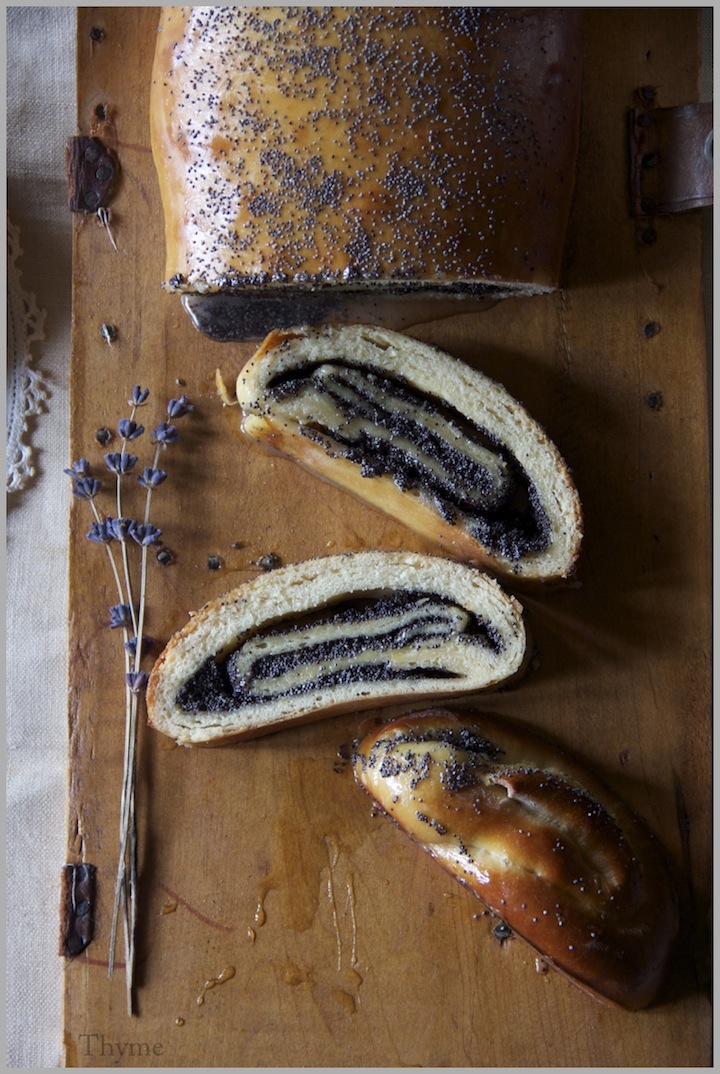 If we could pick a state that would suit our family well, it would be the beautiful, varied, blustery state of Oregon.

We packed our bags for the journey West, keeping the tropical clothing in the closets and instead tucking in  hats, pullovers, and cozy scarves. Oh! how we love cozy scarves. 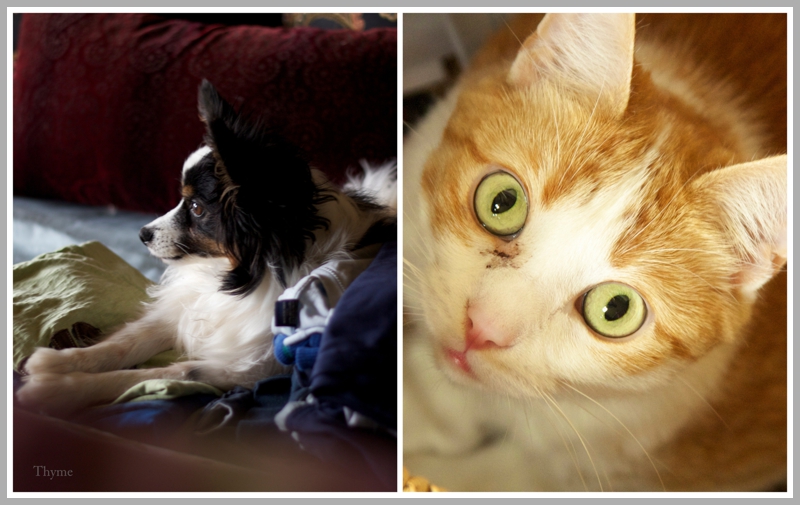 Chester and Polly knew just what we were up to.  When suitcases come out, they become velcro pets.  Chester climbs right into the middle of the clothes that I've laid out on the bed and Polly tries to snuggle in any suitcase she can pleading with her big green eyes to be taken with us.

I was trying to think of something delicious tasting I could bring to my family as gifts.  Again, a recipe in Saveur Magazine's April 2012 issue caught my eye.

Mak Pirog (or Poppy Seed Strudel) is a wonderful rustic brioche-like yeast bread roulade rolled with a moist poppy seed paste.  The bread is eaten throughout Eastern and Central Europe where poppy seeds are commonly harvested from the poppy flower (not the opium producing kind).

We made three loaves of the bread the day before our flight.  They smelled divine baking in the oven. We froze them, wrapped them up really well and added them to  gift bags along with tea and some Texas wildflower honey. 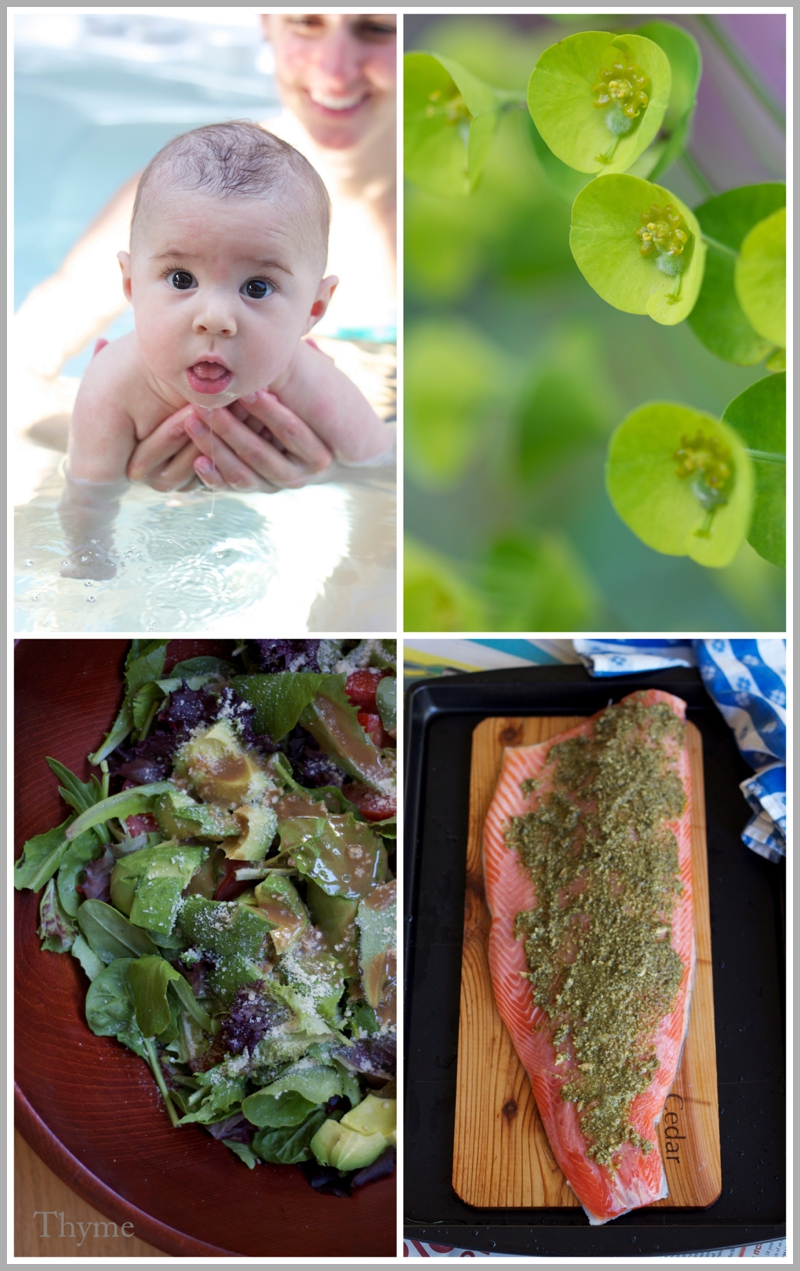 Visiting with our new nephew, Luca, was a complete delight!  He is healthy, good spirited, and a super easy-going baby.  Snuggling him close and walking outside with him was such a pleasure that I don't often have in a house of teens.

One meal we always anticipate is John's bbq Smoked Cedar Salmon.  Slathered with basil pesto and placed on the grill until it is slightly charred, smokey, and moist ~ this is one of the choicest natural gifts of the Pacific Northwest. 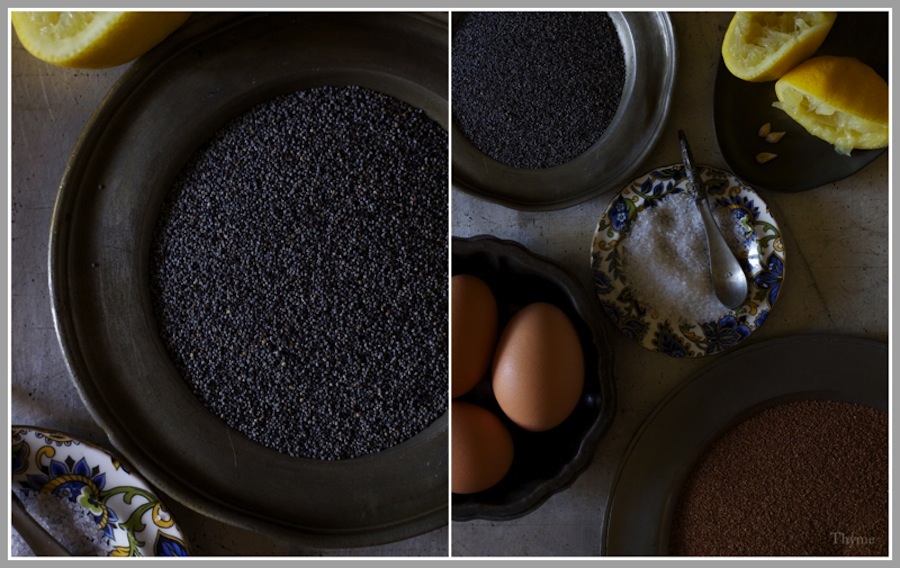 For mornings, the poppy seed bread was enjoyed at breakfast.  These ancient seeds lend a rich and mysterious flavor to sweet breads.  They give this rustic bread a rich almost floral flavor but have a bit of bite to them, like nuts. 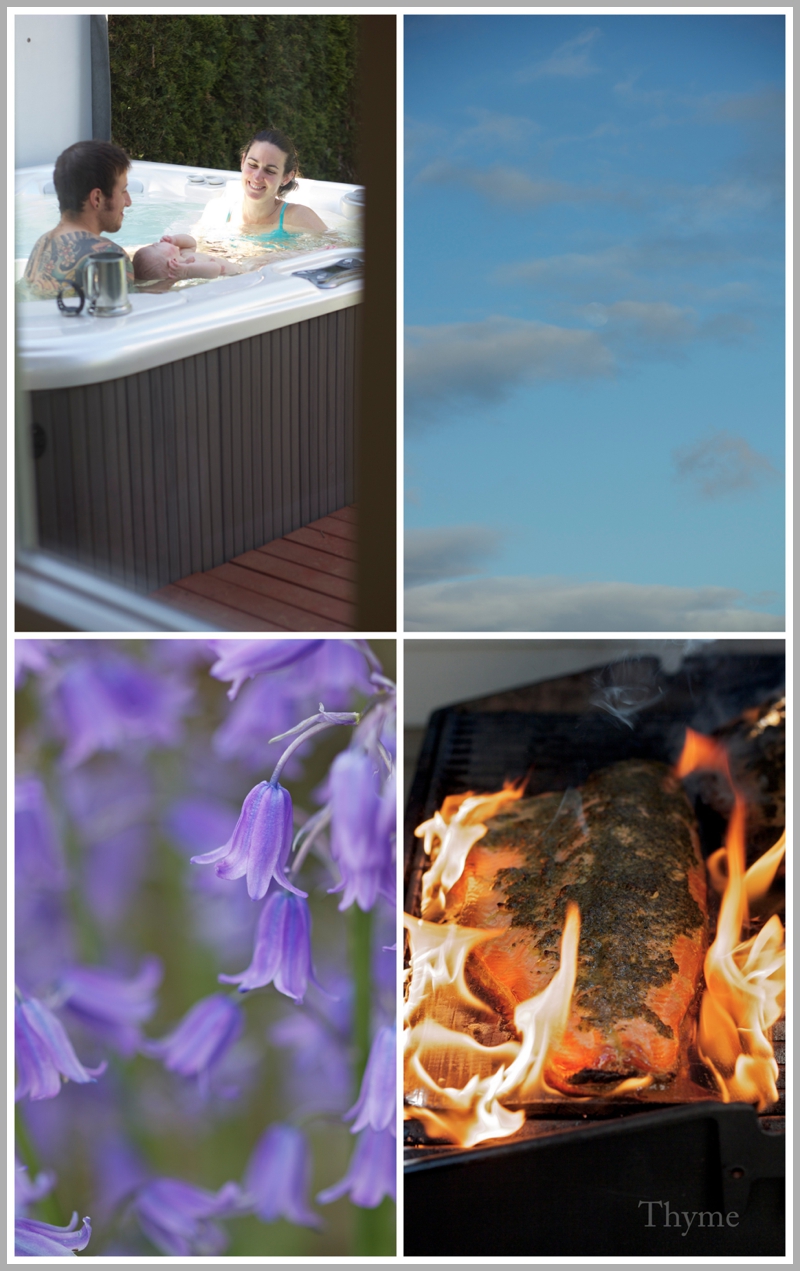 Oregonians are so inspired to live clean, healthy lives.  It's no wonder ~ their bounty of foods like alvocados, hazelnuts, fresh cheeses, and their growing acclaim in wine production is often found on the tables of homes and restaurants.

With the beautiful mountains on one side, the wild and tempestuous coast on the other and the rolling temperate hills of the wine country to the south - this state just has it all. 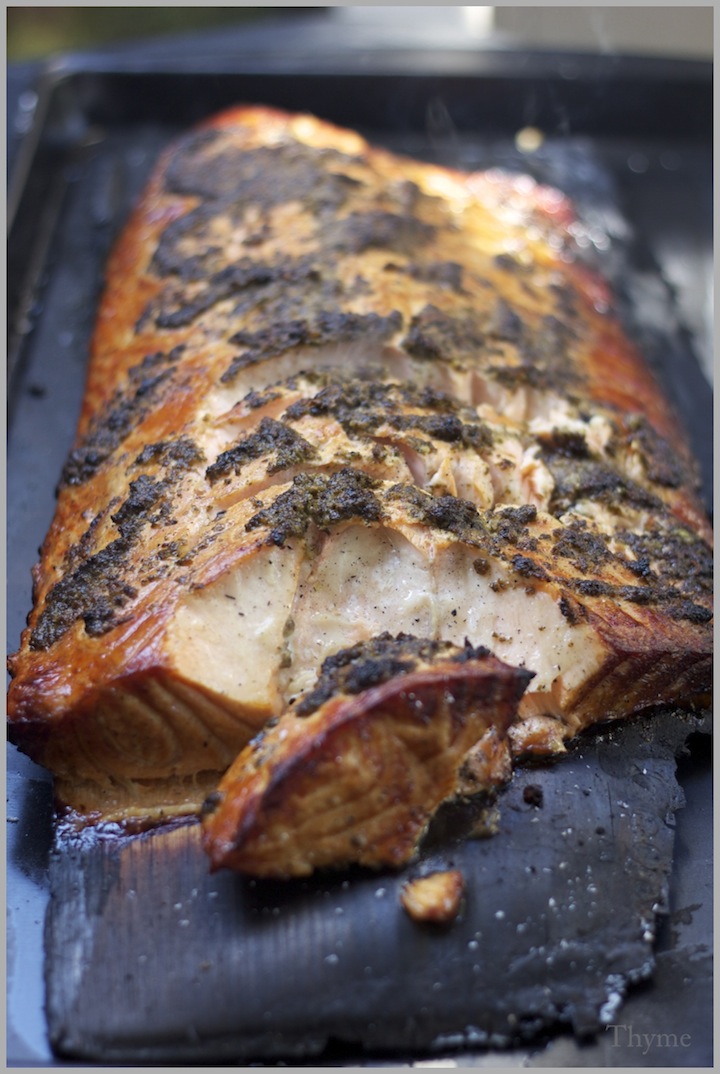 So many wonderful meals around the table were enjoyed with funny and sentimental stories to share.  We roasted vegetables of turnips, beets, onions, and carrots.  We tossed fresh greens with homemade herb dressing.

Since our family spans four generations, stories from retirement celebrations, high school graduations, and baby's first bites are all celebrated and shared at once. 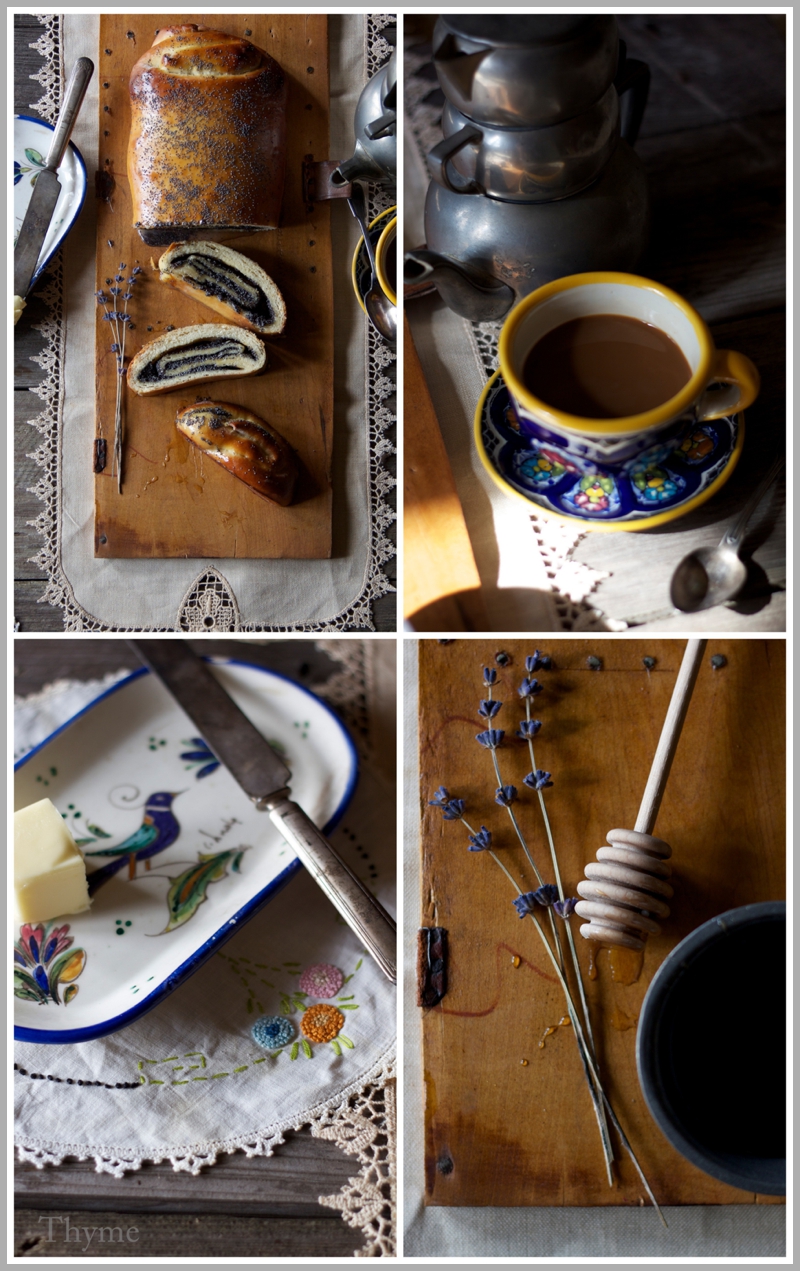 With their lush wet climate, it seems that Oregonians can just about get anything and everything to grow in their soil.  Flowering trees and flowering vines seem to ooze out of every available plot of soil.

Just as the heat is beginning to sore in Texas, Oregon was at the height of their beautiful spring so we enjoyed cool breezes during the day, warm fires at night, and best of all...no humidity! 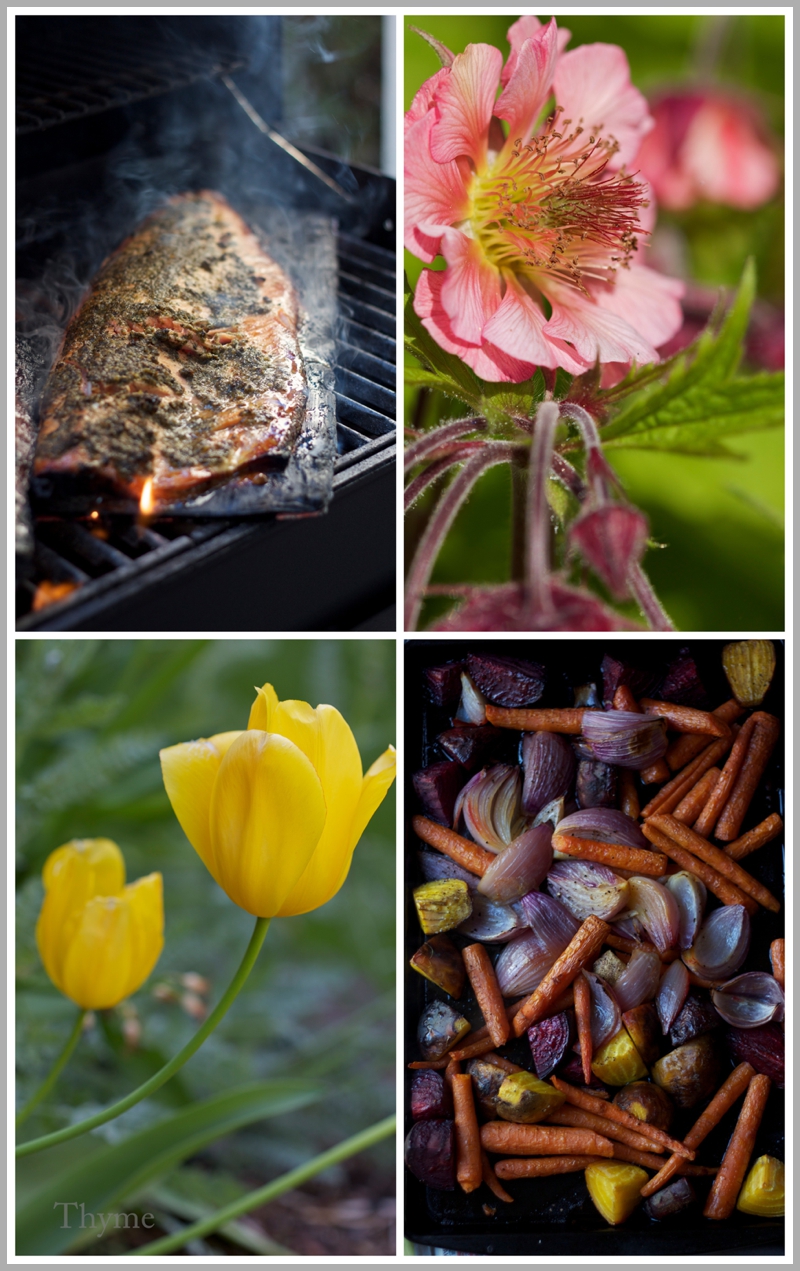 Just after coming off the heels of Houston's fabulous International Festival, we took the opportunity of plunging right into yet another fantastic market event that happens every Saturday in Portland.


Having no expectations of the market, we were thrilled and bedazzled by Portland's finest craftspeople, artisans, musicians, and food vendors. 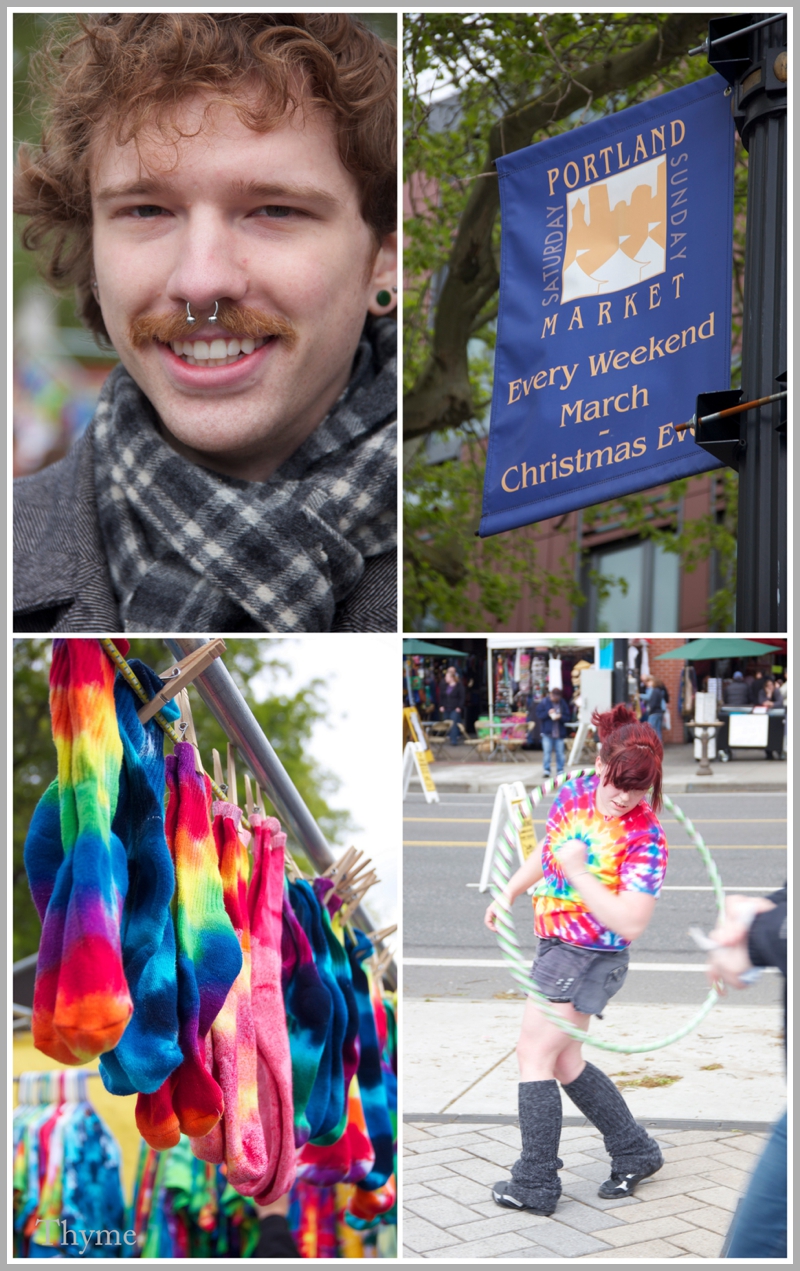 The vibe in Portland is so definite and palpable.  Overall, Portlanders demonstrate a definite love of natural surroundings, homegrown skills, and simplicity of lifestyle. 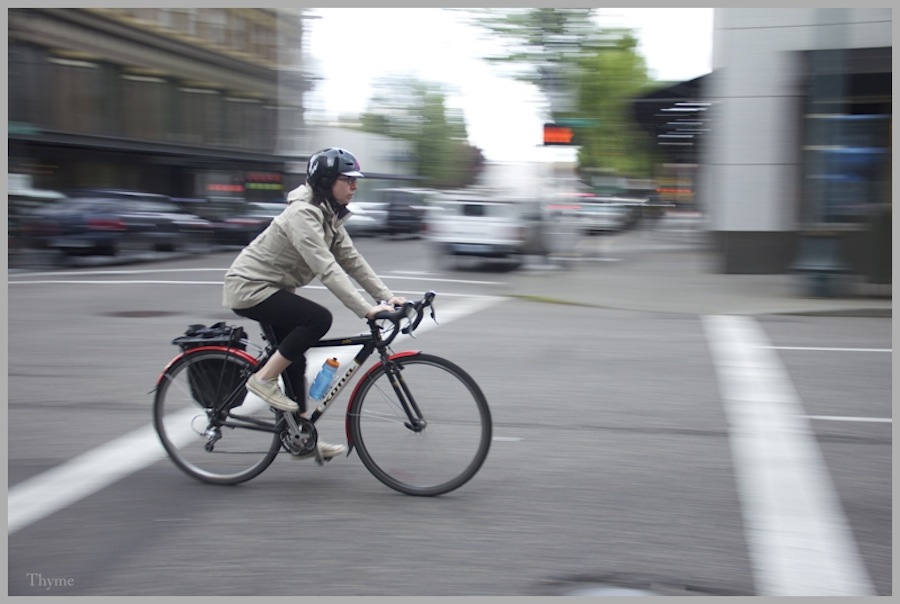 The city doesn't necessarily seem "bike friendly" by design but Portlanders have carved niches wherever possible to leave the cars home and bike from one place to another.

Bikers, skateboarders, motorcyclists, and scooters give the city a slight European feel.  Moreover, it makes people more accessible to and communicative with one another instead of always being behind the wheels of cars. 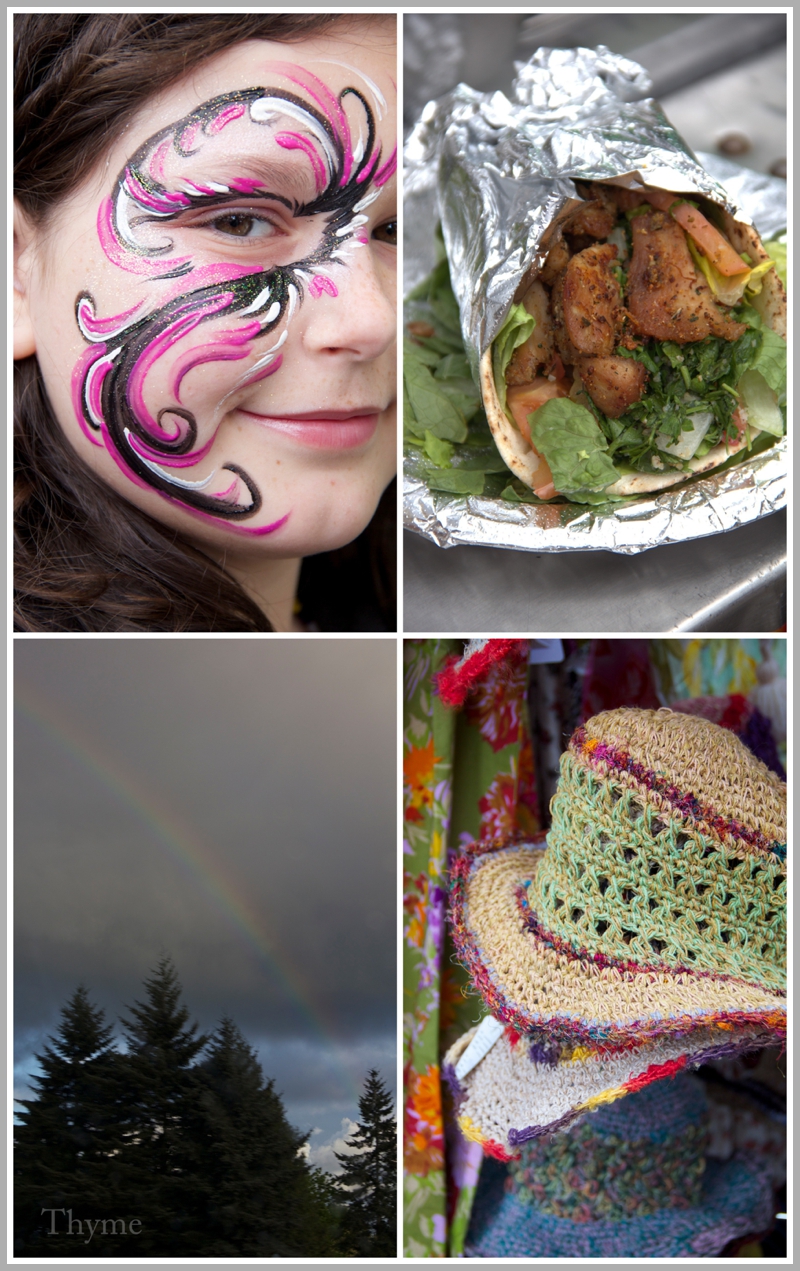 The food stalls looked fabulous.  As usual, I was eyeing the falafels and the gyros.  Missed out on snatching up that woven hat (above) and now I sorely regret it.

How lucky we were to have hardly any rain.  When we arrived in Portland, we were greeted with this big beautiful rainbow slung over the sky. 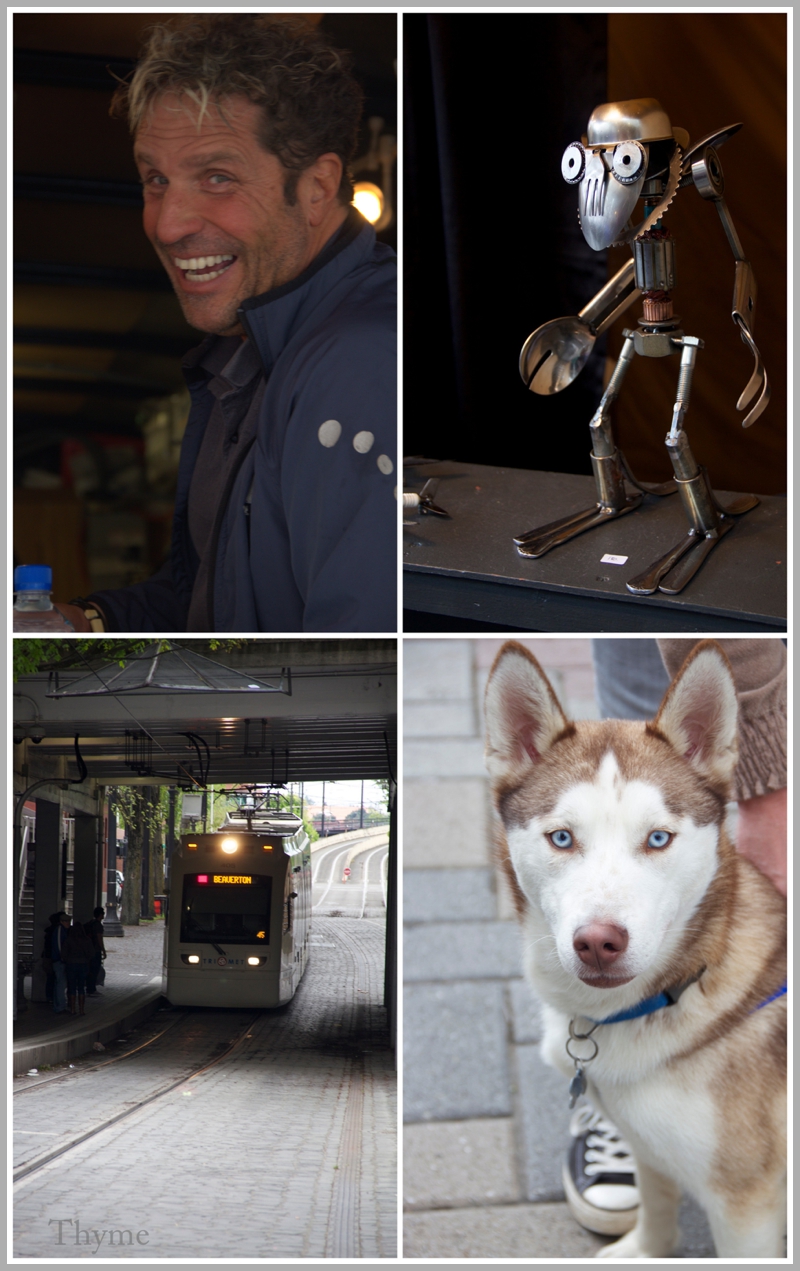 Friendly. Relaxed. Open-minded.  That is how I would describe the personality of the market as a whole.  I think Oregonians know they have a good thing going but they are appreciative of it at the same time. 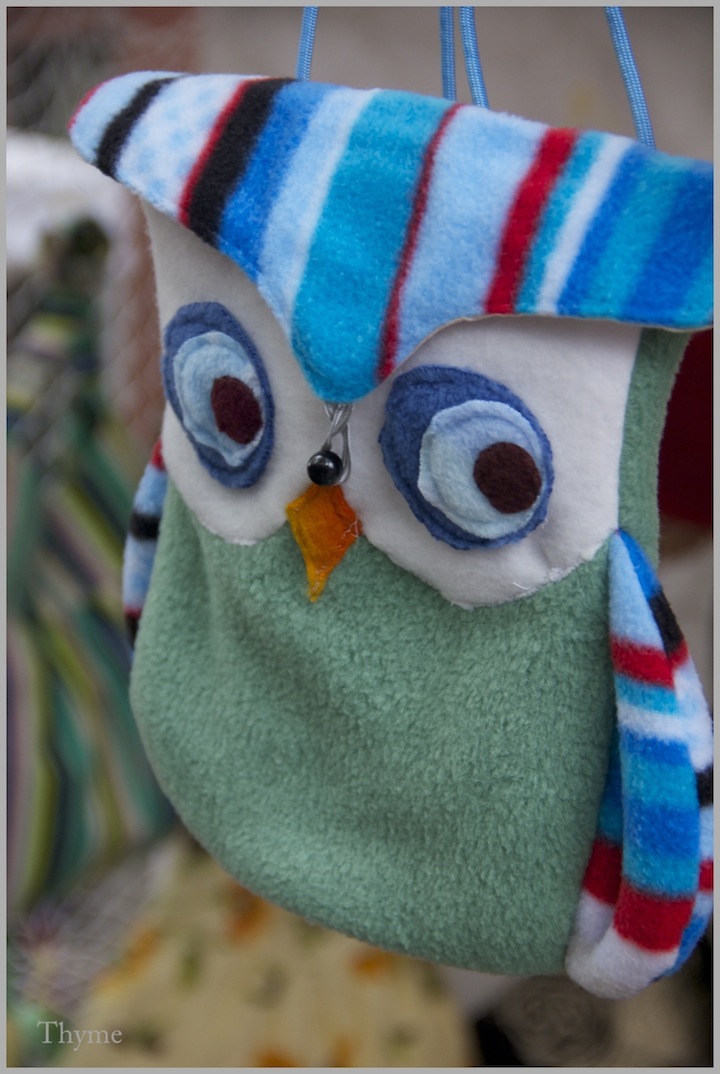 M. and I have a 'thing' for owls.  If she were around 10 again, she would have gone straight for this adorable handmade owl purse.

All crafts for sale at the market must be locally made in order to reserve a booth. 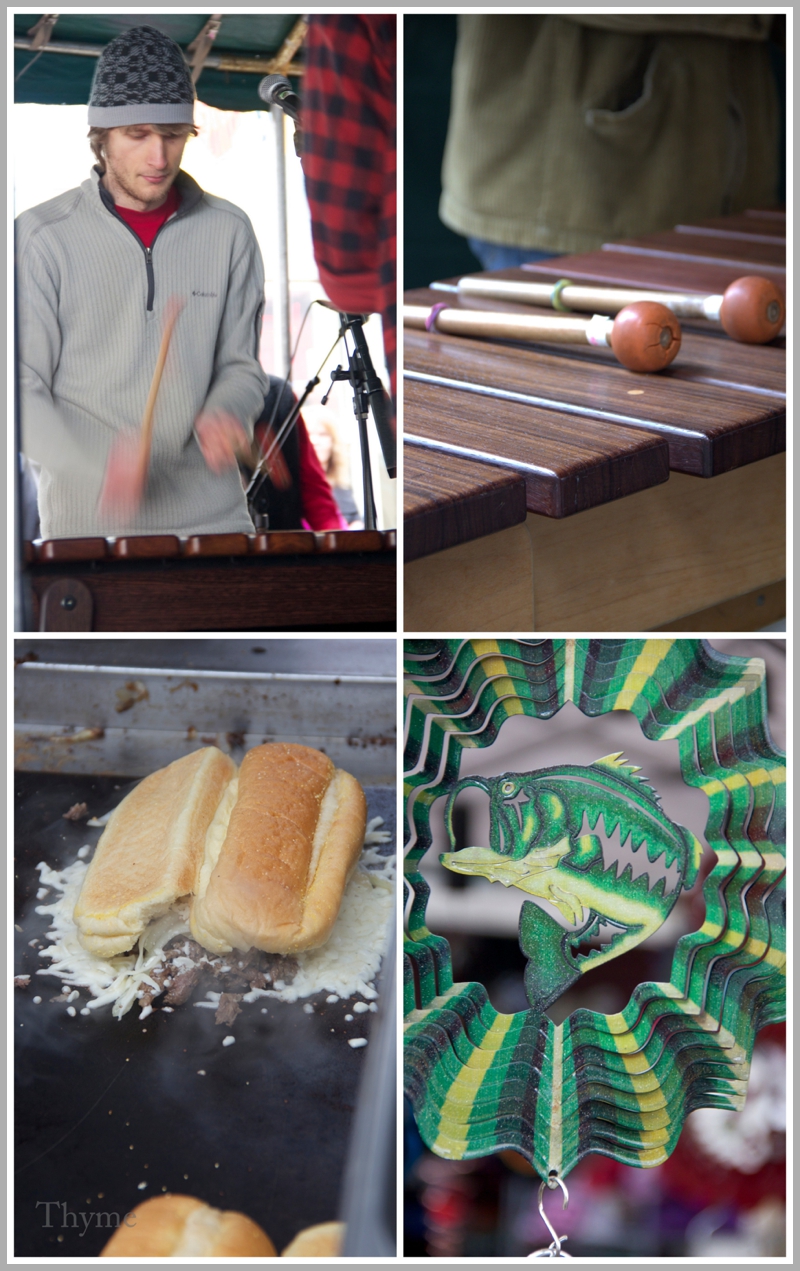 Open since 1974, The Saturday Market is the largest continually operating outdoor arts and crafts market in the U.S.  It's located in the beautiful Waterfront and Ankeny Park in historic Oldtown-Chinatown. 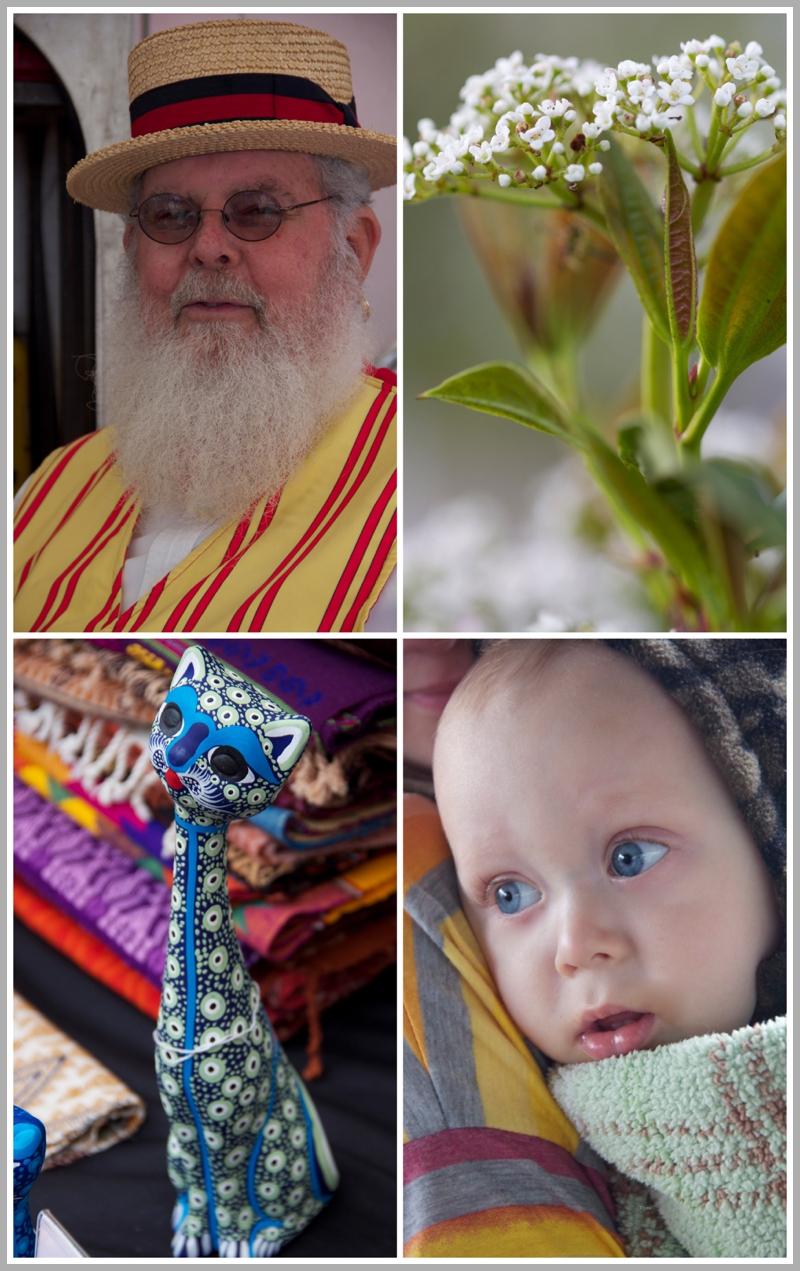 Many families and groups were clustered around the many varied food stalls.  Right in the center, under a covered tent, the lively group, Boka Marimba,  played enchanting tunes from Zimbabwe on their xylophones.  What a sweet sound that promoted a joyful and festive energy to the atmosphere of the market. 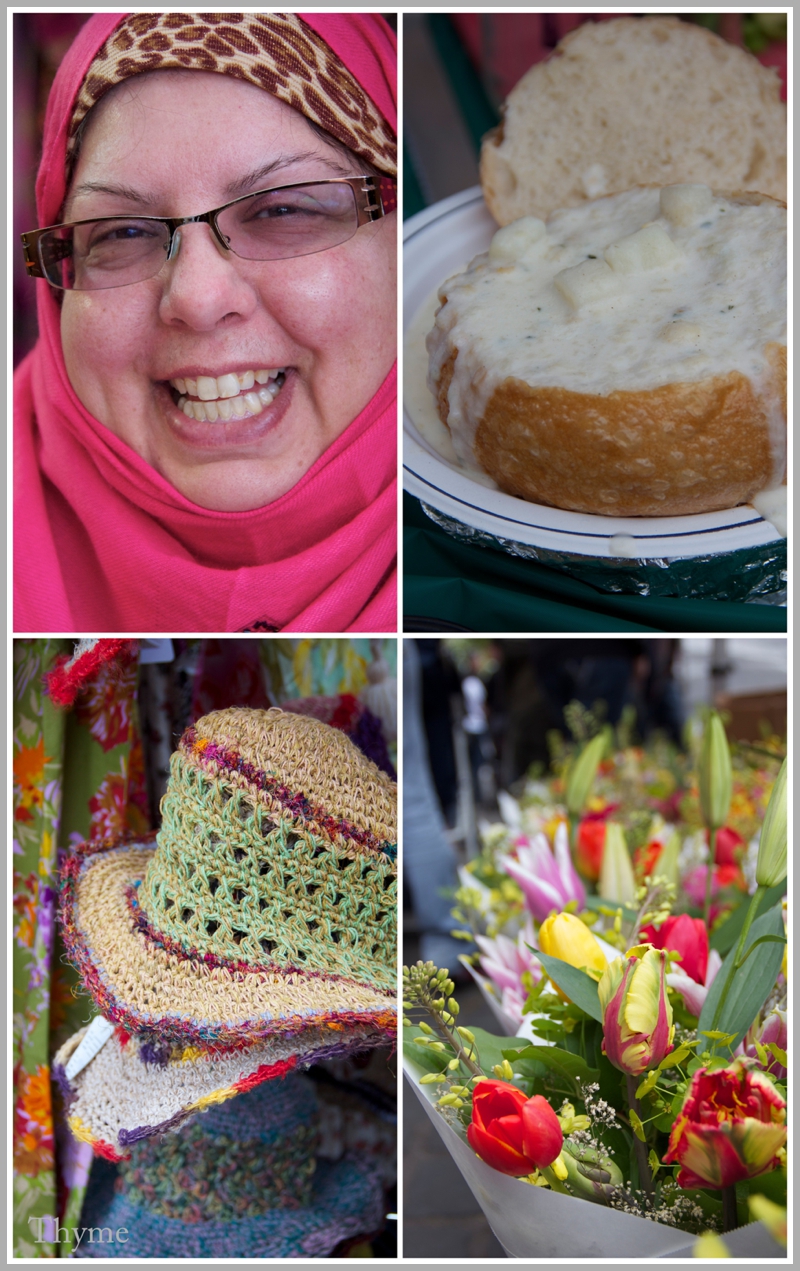 There was a whimsical and free-thinking atmosphere at this lively market filled with artisans of every type.  Often people delighted me with quirky grins, silly antics, and genuine smiles. 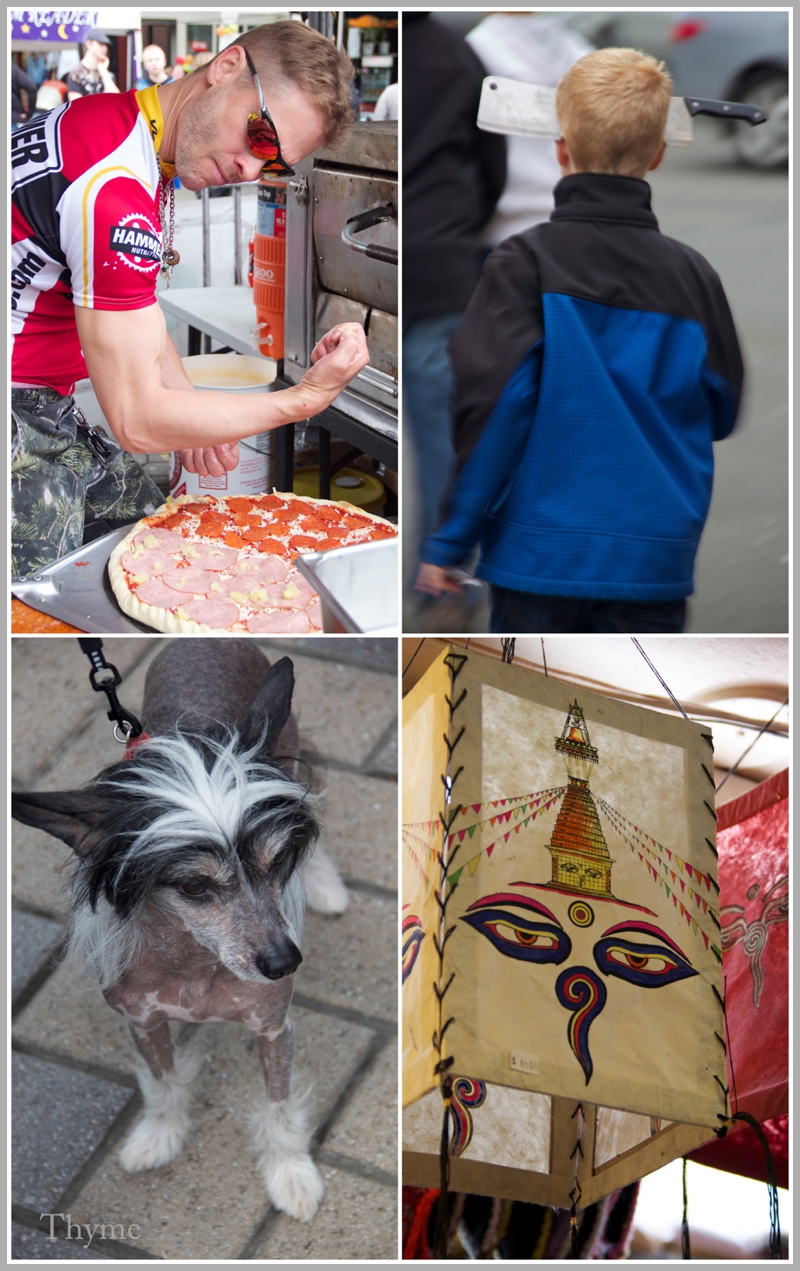 I am most happy when wandering through markets.  Always dreaming of the french street markets in Paris or small Provencal towns, I was so proud to be attending so many fabulous markets right here in the U.S. this year. 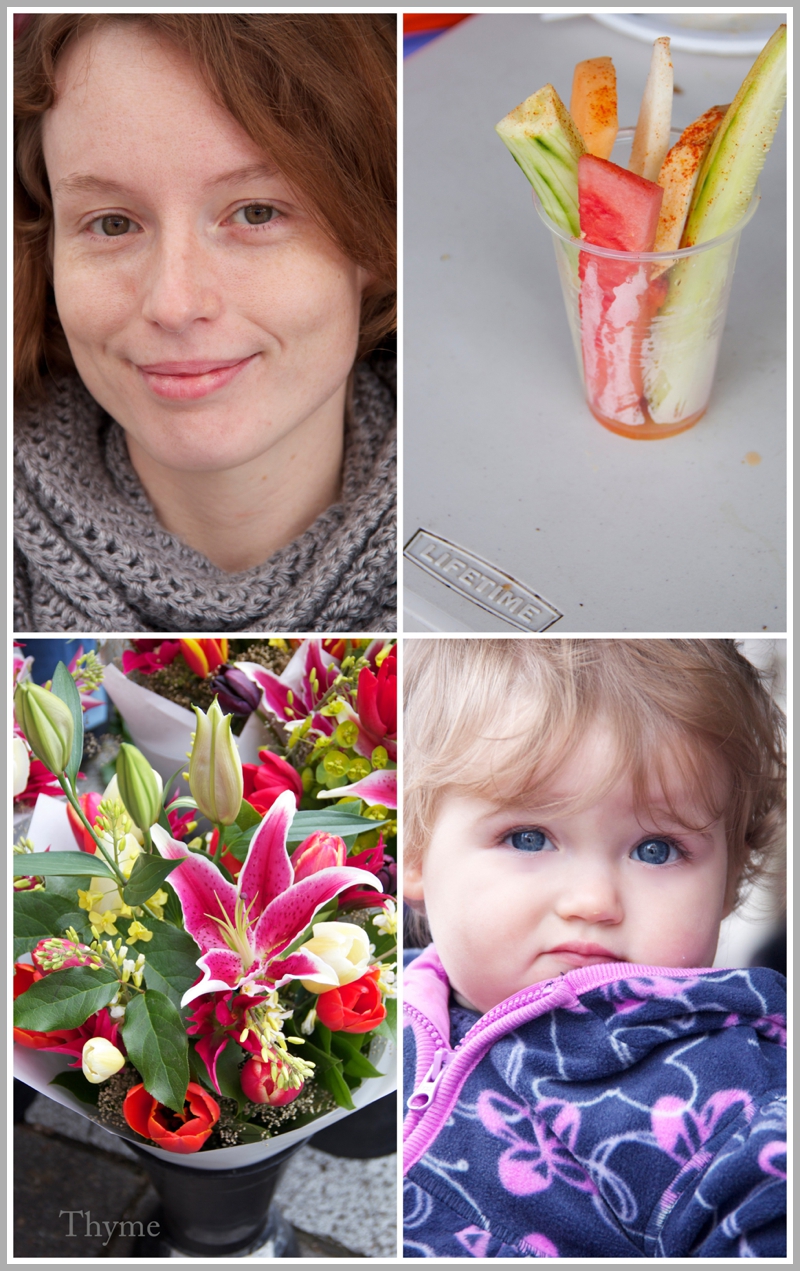 One of the highlighted snacks at the market were the tall cups filled with fruit and cucumber sticks.  A sprinkle of spice was dusted on top of this cold fresh treat. 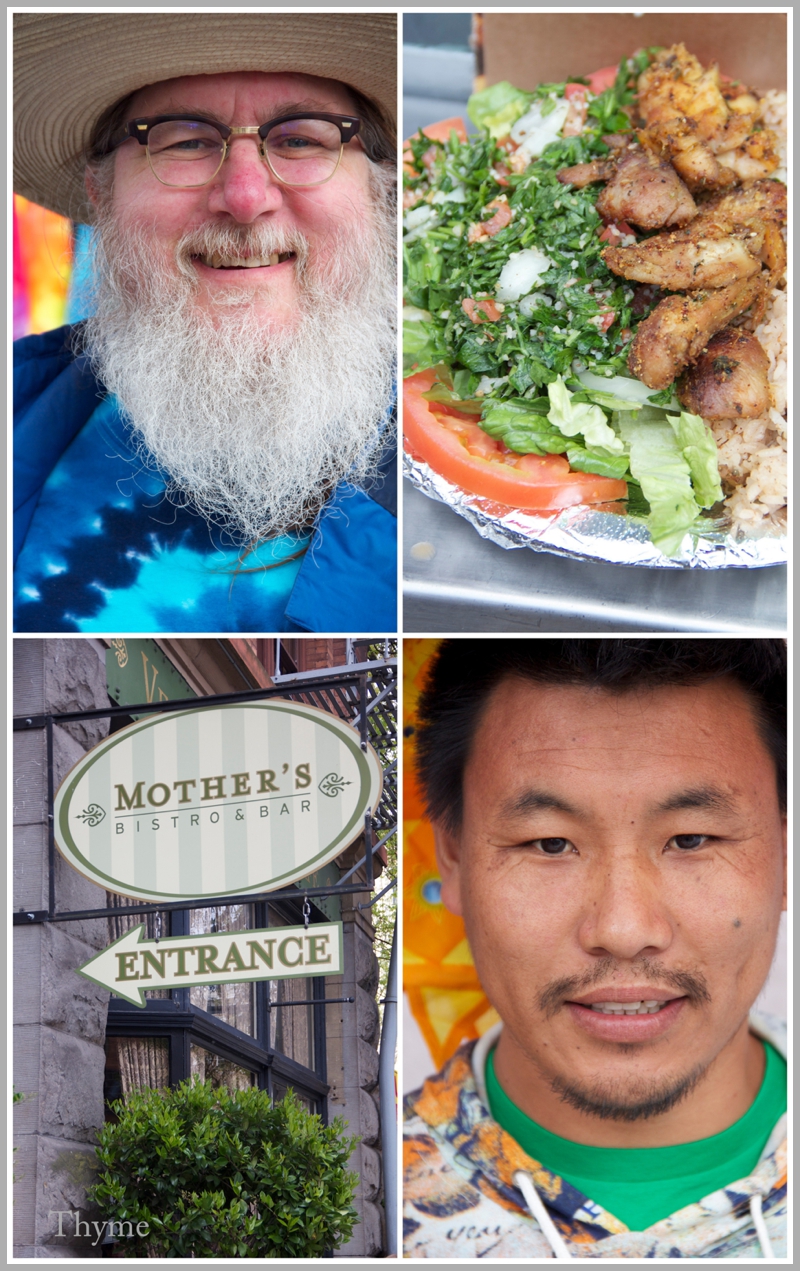 Around the market are many fun Portland restaurants.  Several of them had lines of eager hopefuls that stretched down the block.

We were in the mood for sushi and had been recommended to head to Mio Sushi a short car ride  from the market. 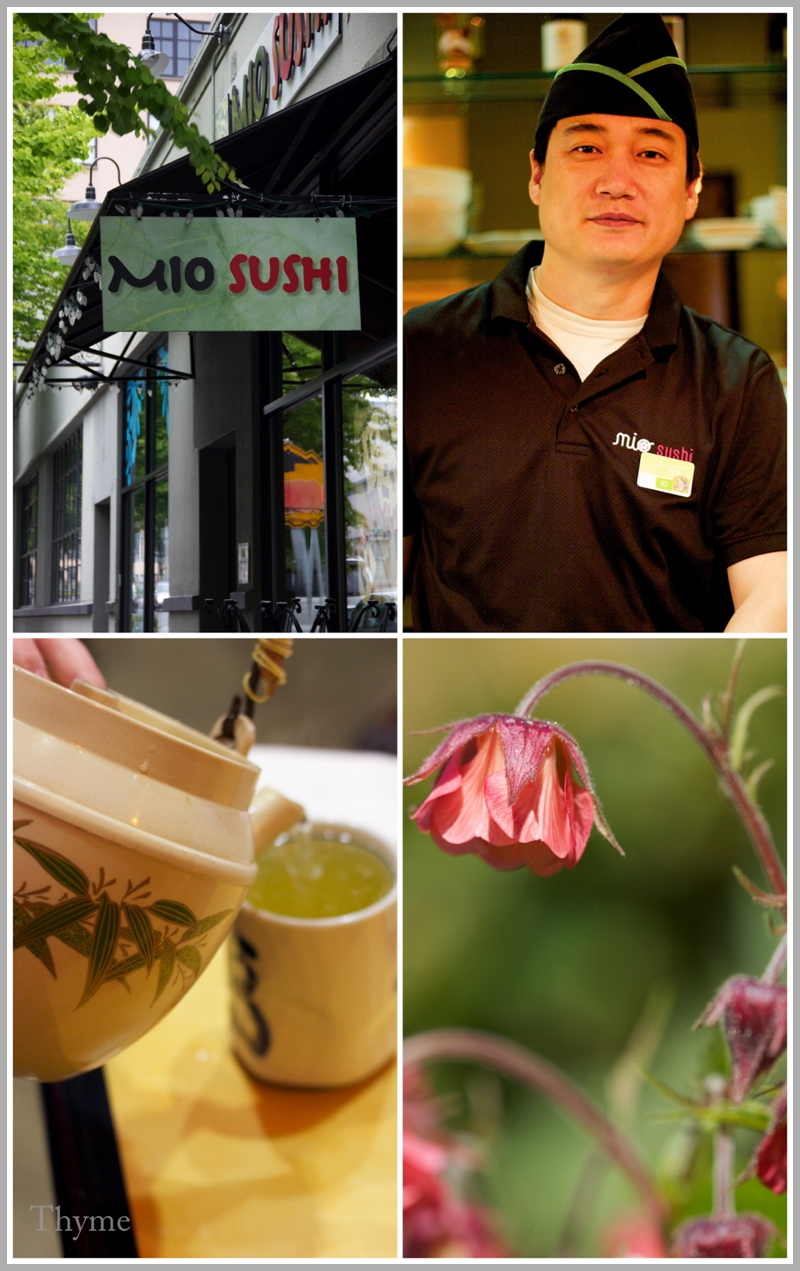 It did not disappoint.  From steaming mugs of green tea to the cold soba noodles with flavored dipping sauce.


All of the fish at Mio Sushi are sourced  from sustainable fisheries where possible.  "Sustainable" means that the food source is not depleted from one growing season to the next. 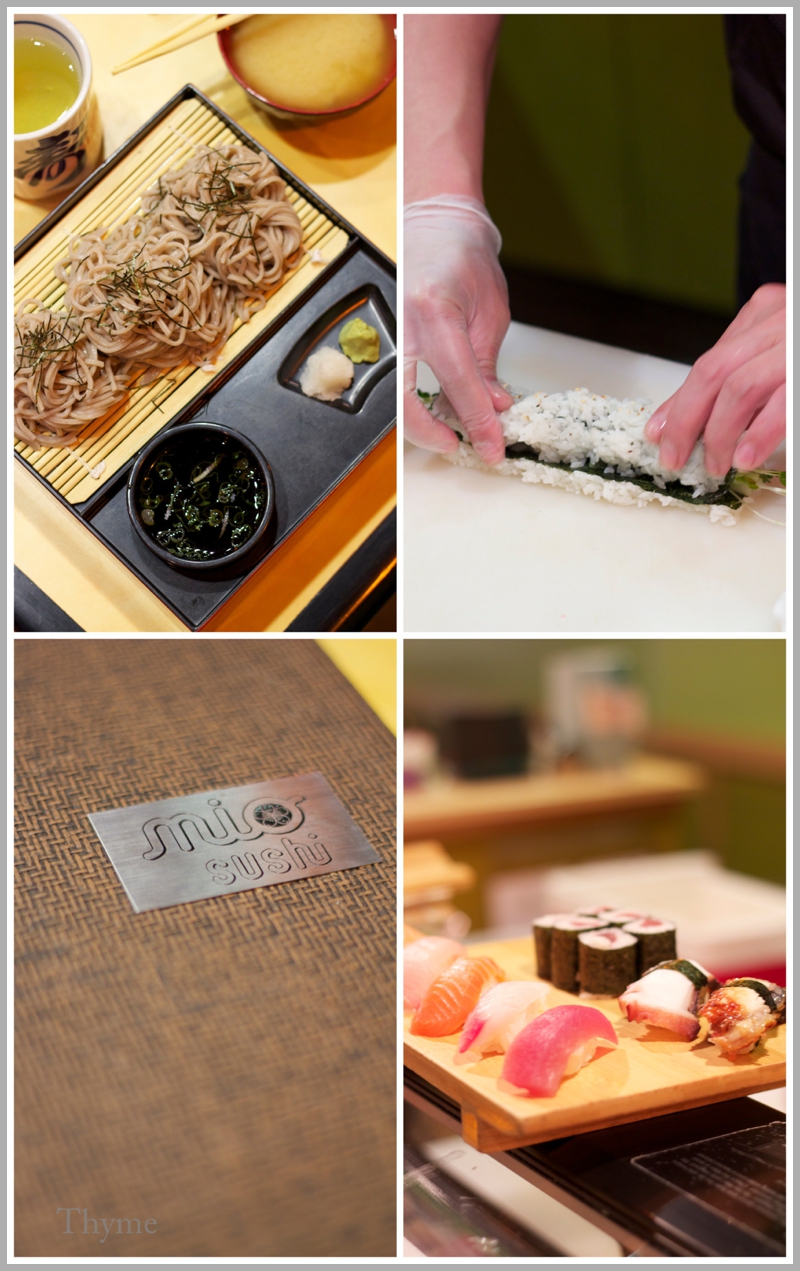 Sushi creations such as the "The Mount Hood Roll" and "The Mount St. Helen Roll" were fun varieties that tie in the local landscape to the menu selections.


We had certainly worked up quite the appetite walking all over the market and smelling the delicious food there.  Also, we were super strong and passed up on devouring a few doughnuts at... 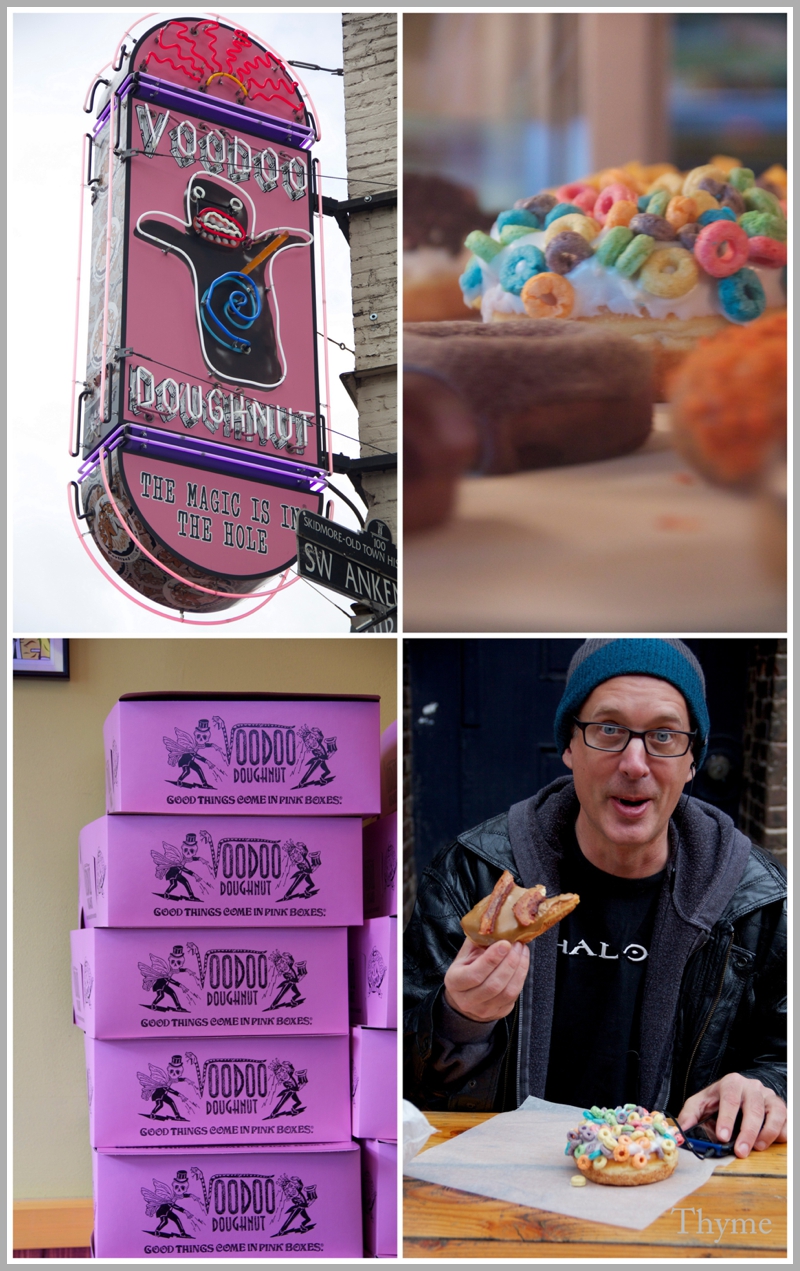 Can you imagine sinking your teeth into one of those doughnuts piled high with Fruit Loops?  Crazy fun idea for a quirky way to sell sweet treats.

Now as much as Portlanders love their healthy lifestyle approach, I think their weakness is Voo-Doo doughnuts.  The line of people waiting to get in was down the block! 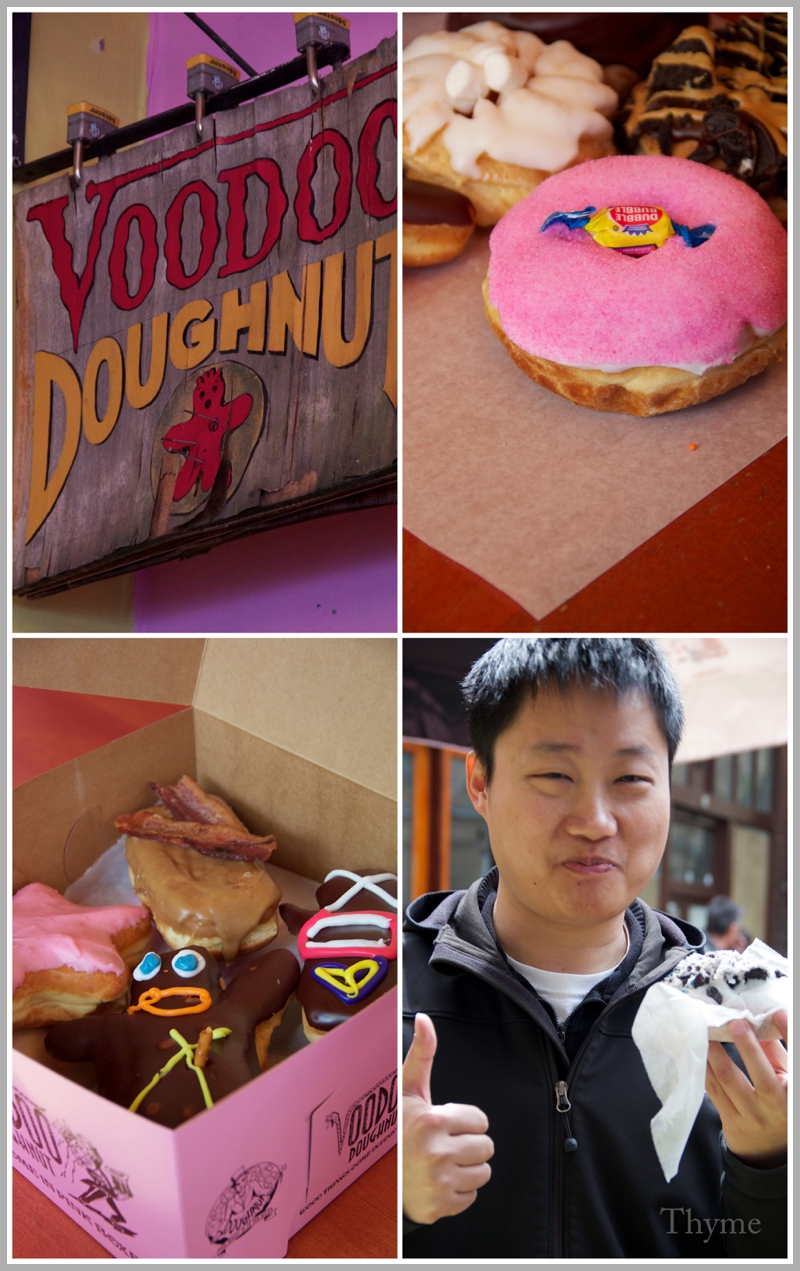 Several people were sitting at the picnic tables outside having 'zen-like' moments while preparing to devour their doughnut prizes.  It was all rather comical since the shop is a stone's throw away from the health-centric atmosphere of the Saturday Market.

So much more coming up to see in the gorgeous state of Oregon.  Next stops are:

Youngberg Inn and B&B perched on a hill top in Oregon's lush Willamette Wine Country next to the all-American town of McMinnville.

The rugged, blustery, and wild Oregon coastline...with a sweet stop off at Tillamook as well as the bustling little port town, Newport!


Make the dough: Whisk together 6 tbsp. heated milk and yeast in a bowl; let sit until foamy, about 10 minutes. Whisk in ¼ cup sugar, the oil, 1 tsp. salt, and the egg and yolk; add flour, and stir until dough forms. Transfer to a floured work surface; knead until smooth, about 6 minutes. Transfer to a lightly greased bowl and cover with plastic wrap; let sit until doubled in size, about 2 hours. Punch down dough; cover, and let sit until puffed, about 1 hour.

Meanwhile, make the filling: Heat remaining milk, sugar, and salt, and ground poppy seeds, butter, and zest in a 4-qt. saucepan over medium-high heat; cook, stirring, until thickened and smooth, about 4 minutes. Stir in vanilla, and let cool.

Heat oven to 350°. Punch down the dough, and halve it; transfer each half to a work surface and, using a rolling pin, flatten each into a 10″ x 14″ rectangle. Spread half the poppy seed filling over each rectangle and fold the longer sides 1″ toward the center; starting from one short side, fold up rectangles into 3″-4″-wide flat loaves. Transfer loaves, seam side down, to a parchment paper—lined baking sheet, and brush tops with egg wash; sprinkle with whole poppy seeds. Bake until golden brown, about 20 minutes.