Flap Steak on the Grill...which led us to Franklin's... in the Queue 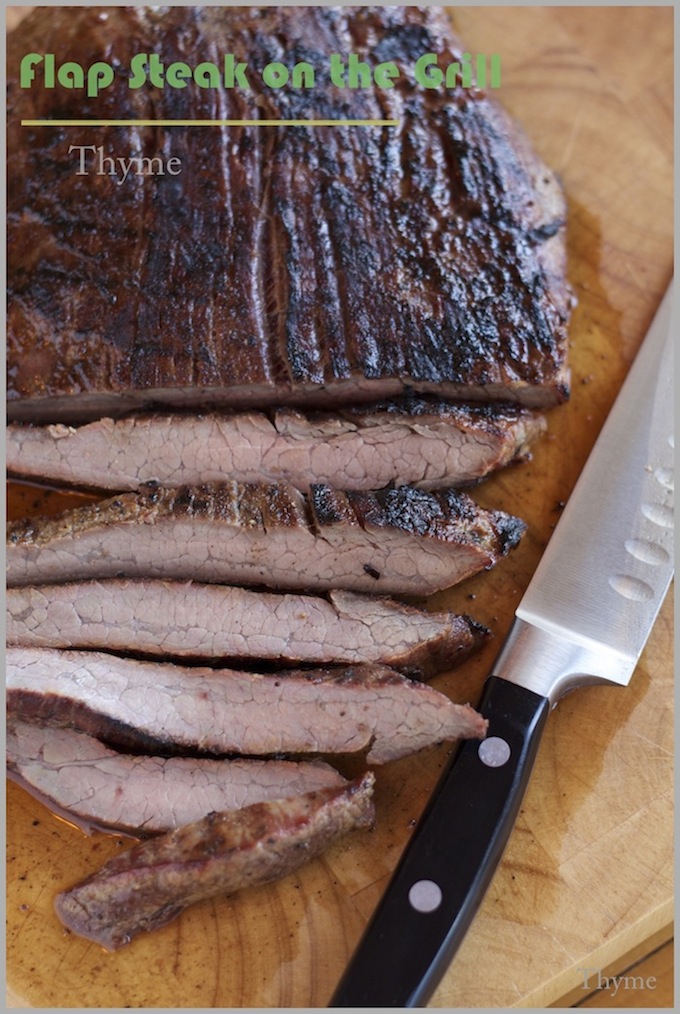 Thinking back on this Spring in Texas involves scenes of  fresh blooms, sweeping winds, and our first round of outdoor dinners on the grill. 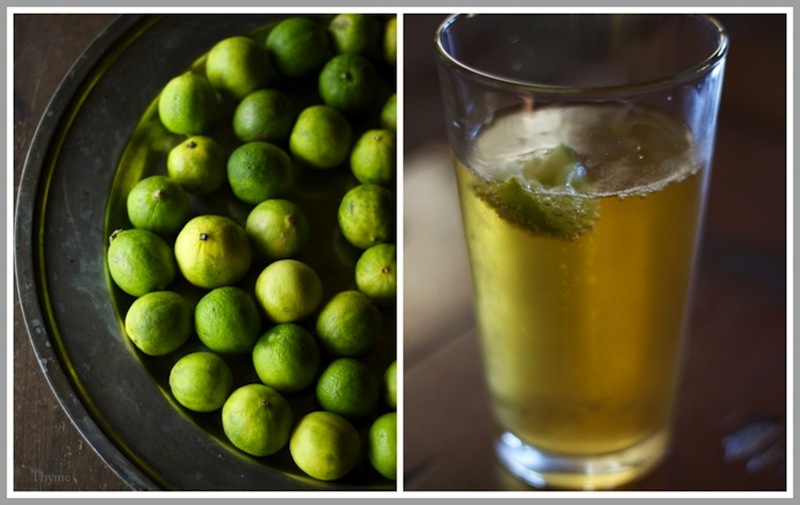 Weekends usually start with a cold beer and freshly cut limes floating in the amber brew.  Whenever we get that first whiff of barbecue scent winding its way through  backyards, up and over neighboring fences...we know its time to fire up our little weber grill. 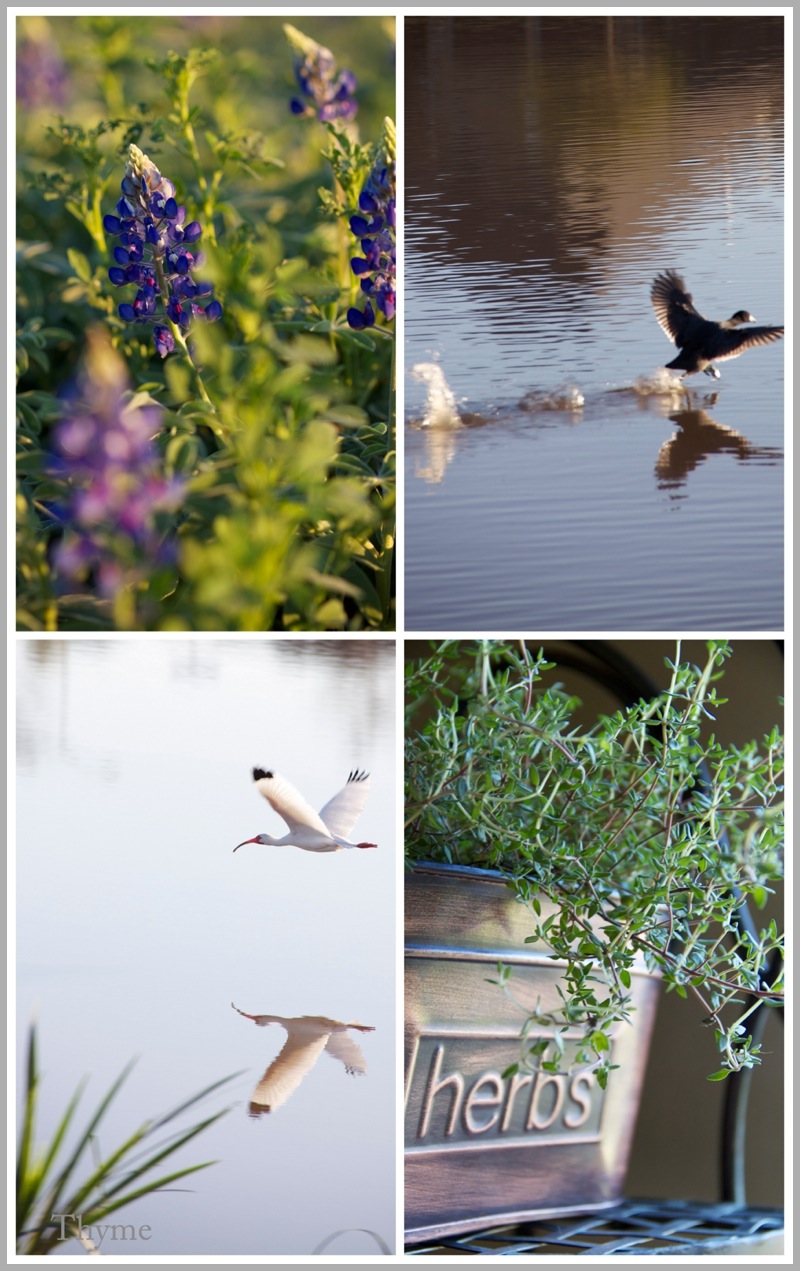 We're in full throttle Texan summer right now, but I greedily held on to my scenes of springtime in the south so that I could remember the fresh, colorful, and lush landscapes of bluebonnets.

Bluebonnets grow everywhere in Texas in the spring.  Alongside the highways, around lakes and ponds, across vast swaths of farmlands.  It's a beautiful sight and distinctly unique to the Texan landscape. 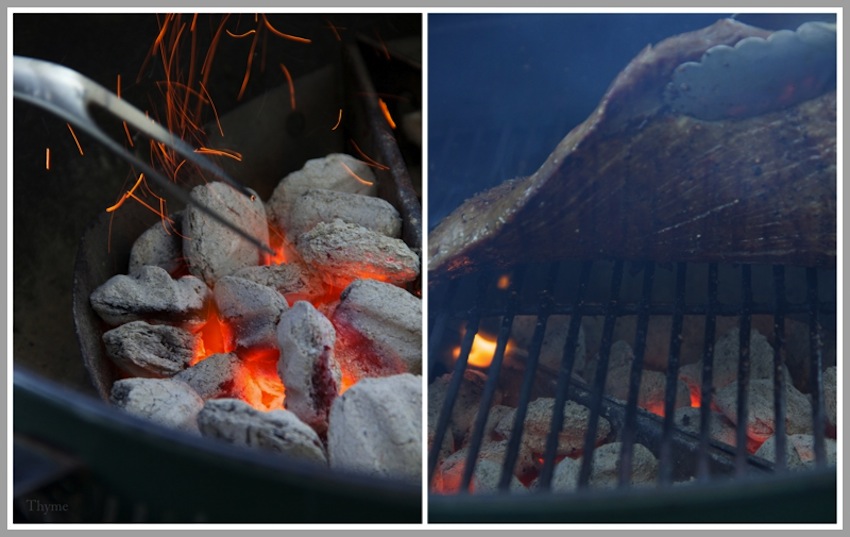 Flap steak is what we usually reach for first when we fire up the summer grilling.  We don't eat meat on a every day schedule so flap steak presents an easy, tasteful barbecue option.

We like to slice it thin, caramelize an onion, heat up some tortillas and make nice smoky soft tacos for weekend meals. 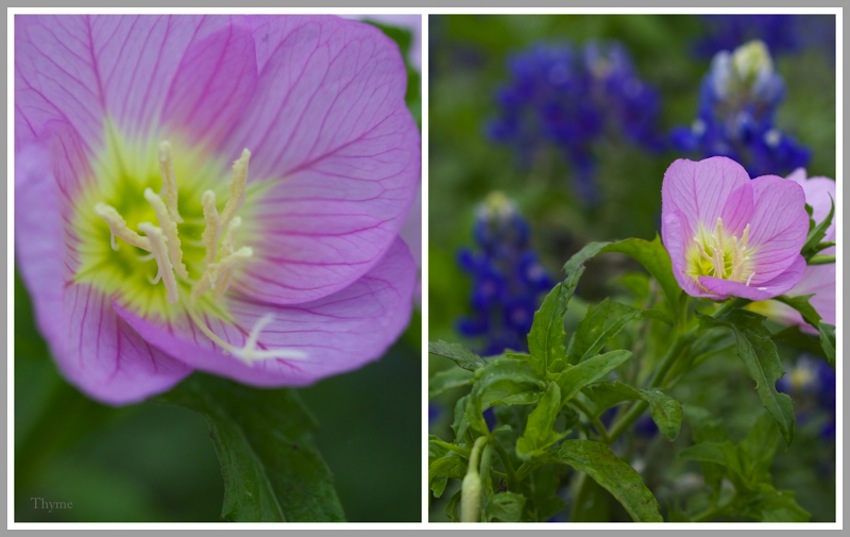 The flowers this year were stunning.  The colors were bright and cheerful.  The bluebonnets mixing in with the tart pink and yellow buttercup flowers were a fun colorful contrast. 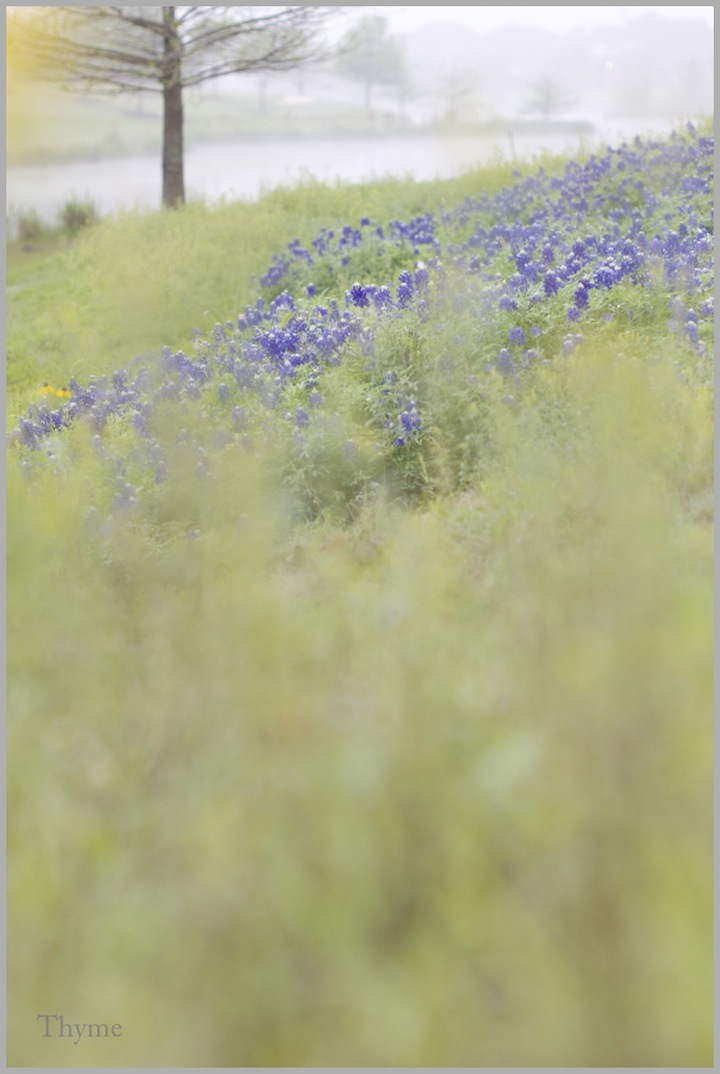 Taking Chester on early morning walks were deliciously cool as the colors of the landscape were muted then and appeared magical and surreal.

Fall is my favorite...but second would come this mystical time of spring. 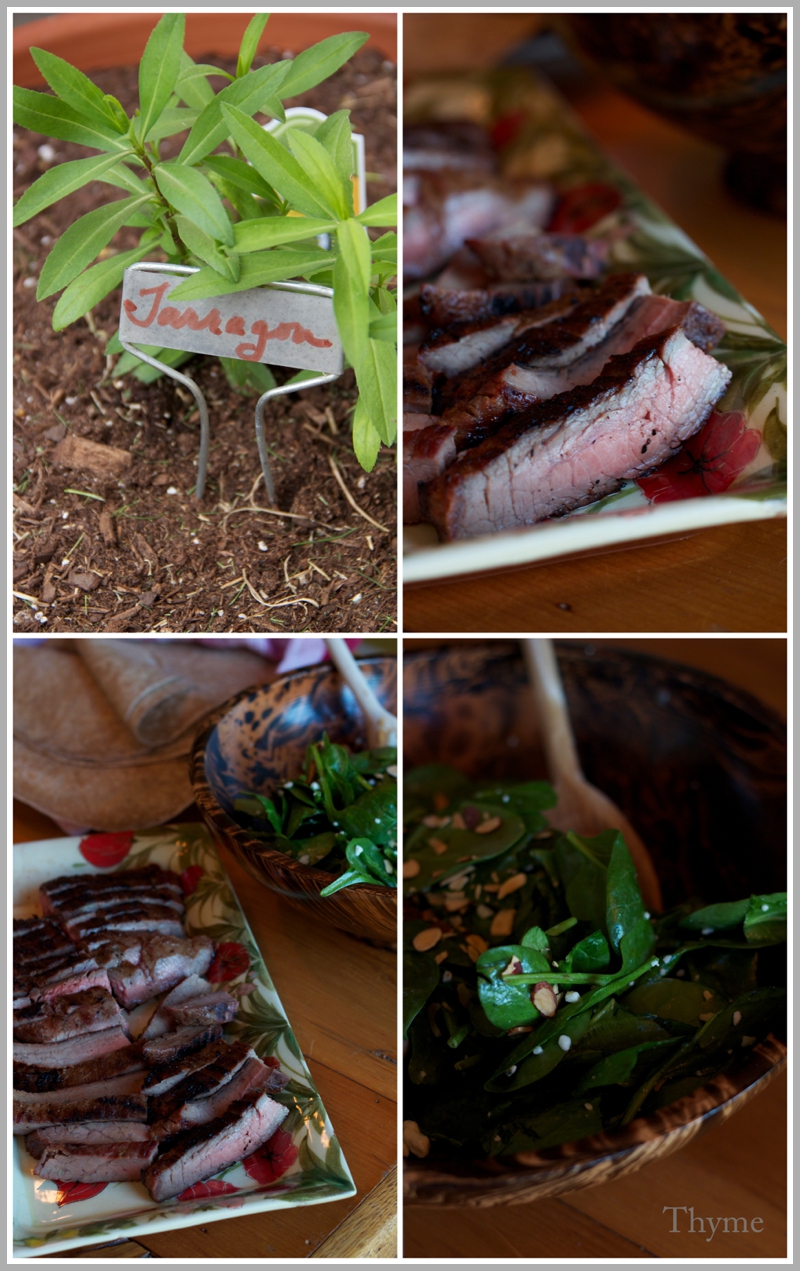 It was time to plant my summer herbs in pots.  I grow tarragon, spearmint, rosemary, thyme (of course!), lavender, dill, marjoram, and oregano.

Next year...possibly tomatoes and berries. 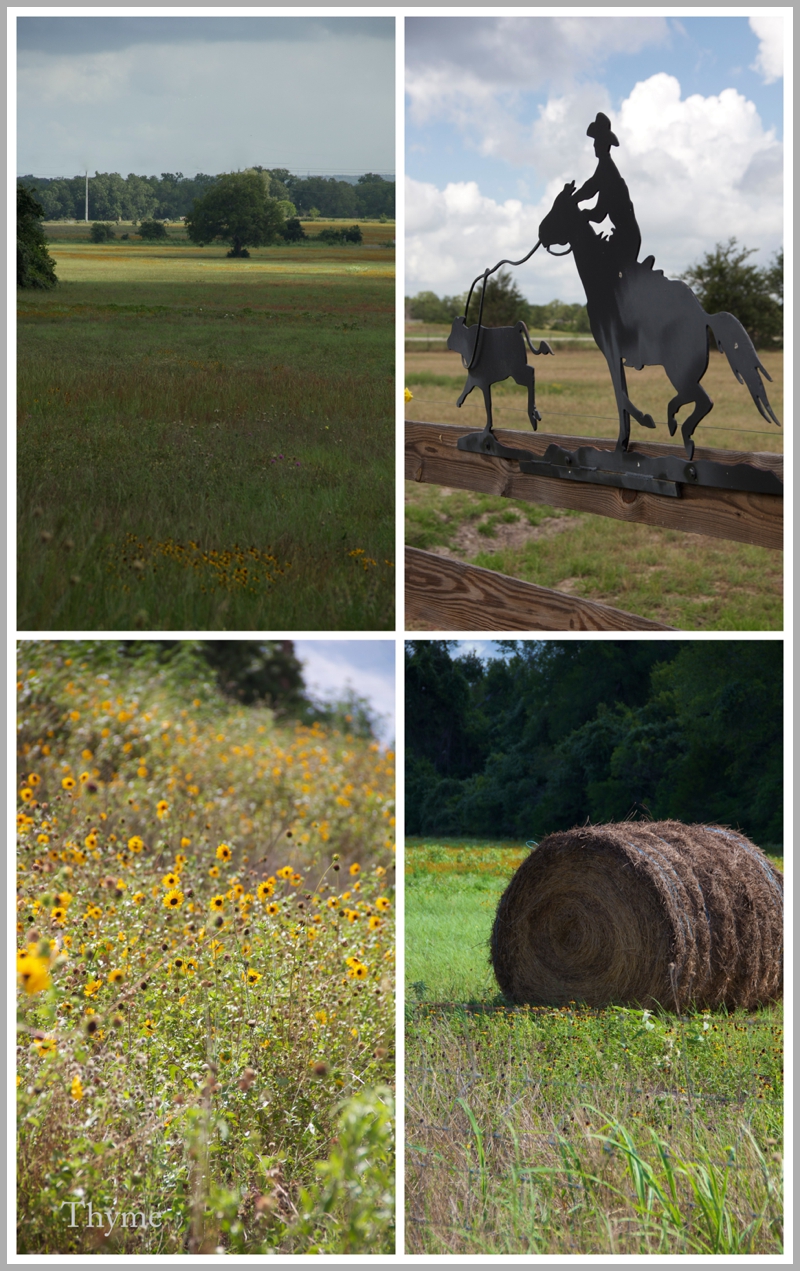 But!!  Now we are in mid summer.  It is time to head up to one of the first of many trips to Austin for M.'s college orientation!

One teen girl here is very excited and has been counting down the weeks until this first chapter in her college life unfolds.

We packed up and hit the road.

While she dreamed of dorms and new friends...clubs and meal plans...

I dreamed of ...Austin...the food capital of Texas!!

Did I say Barbecue?? 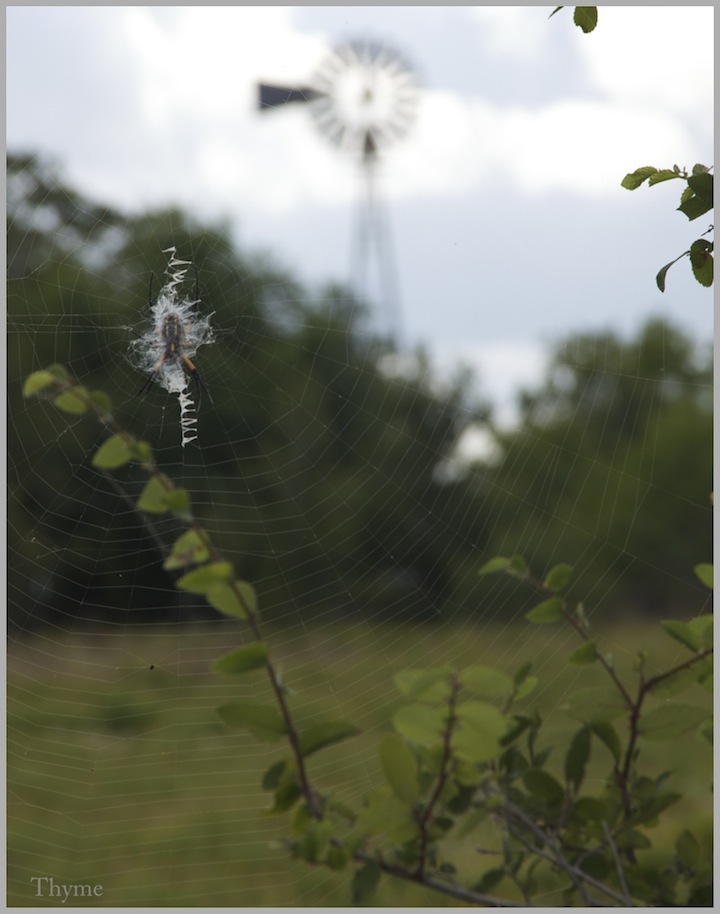 The drive up to Austin is filled with iconic landmarks of Texas.  Windmills dot the horizon.  Gnarly trees twist and turn in the vast fields scattered with cattle.

Eventually the flat lands of the Houston area begin to undulate and form themselves into pulsating hills and valleys as we close in on Austin. 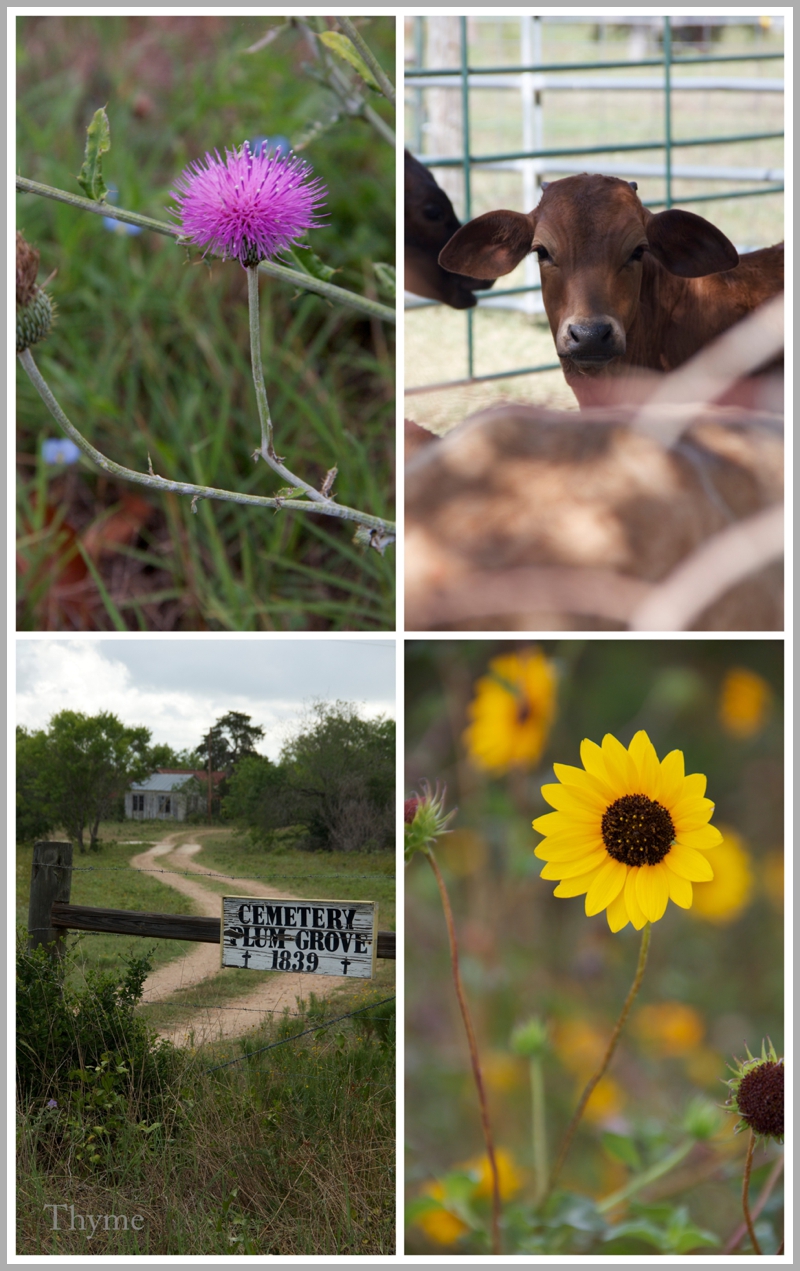 The deep velvety shade of the purple bluebonnets give way to the tart bright shades of sunshine yellow as the wild sunflowers take over the fields alongside the highway.

Ask anyone in Austin...where do we go to get a taste of the best barbecue in town? 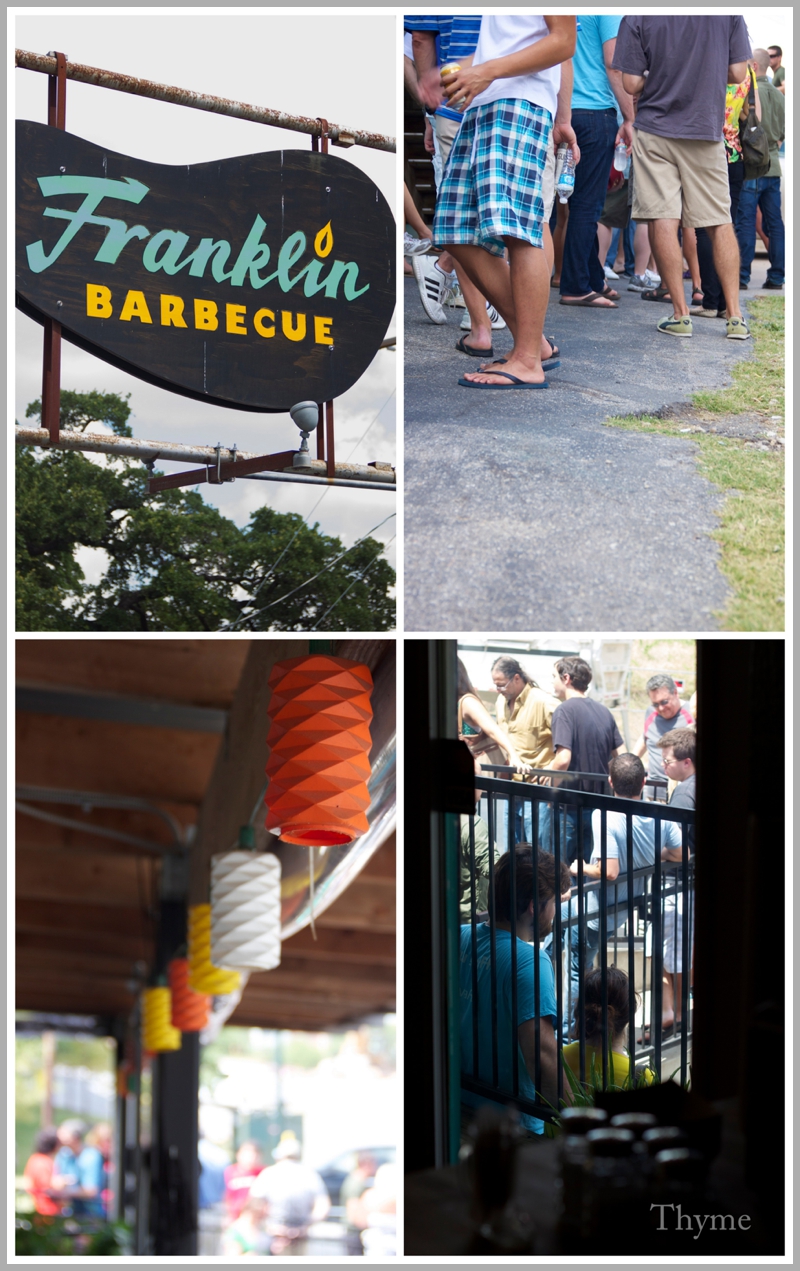 Big, Big problem for the Kenney's.

Outside in the SUN! 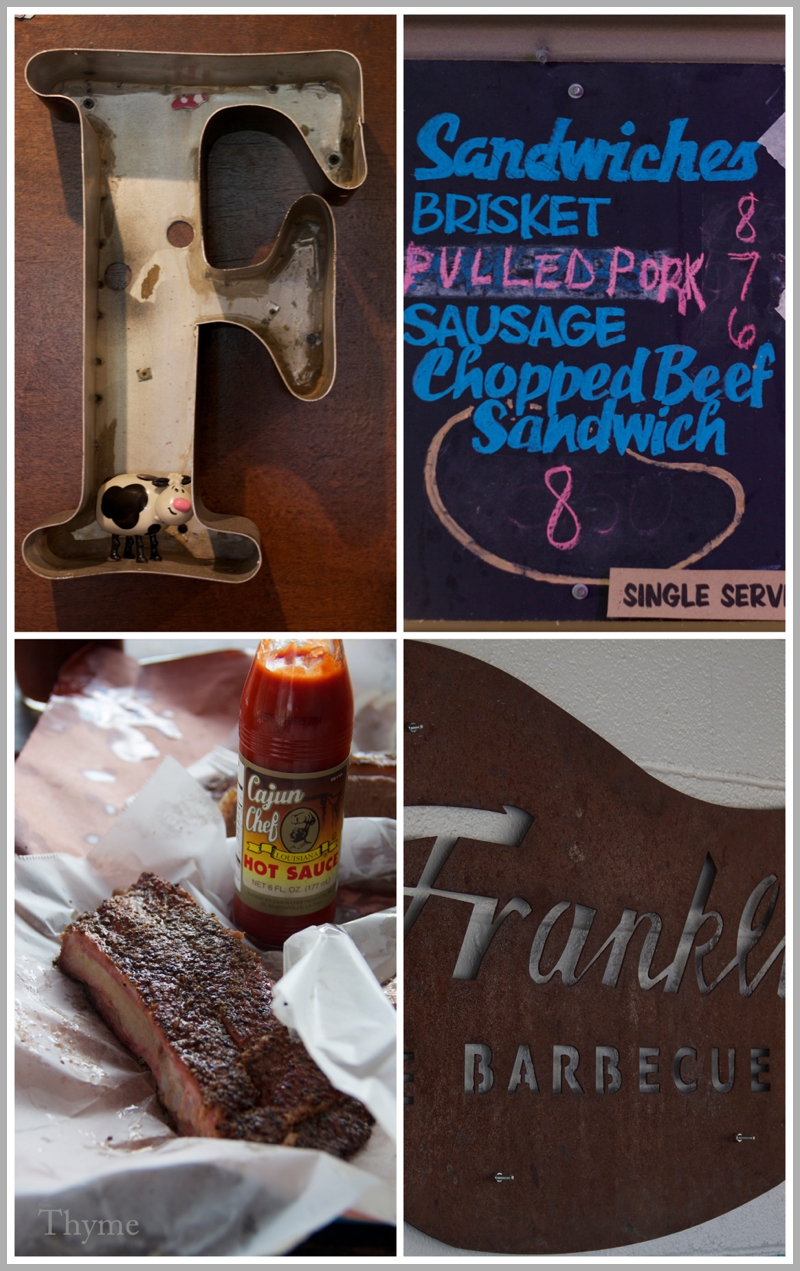 I left out the part about the (1 hour outdoor wait in 100˚F heat) when I casually mentioned to the kids that we would be arriving in Austin just in time for an authentic barbecue lunch. 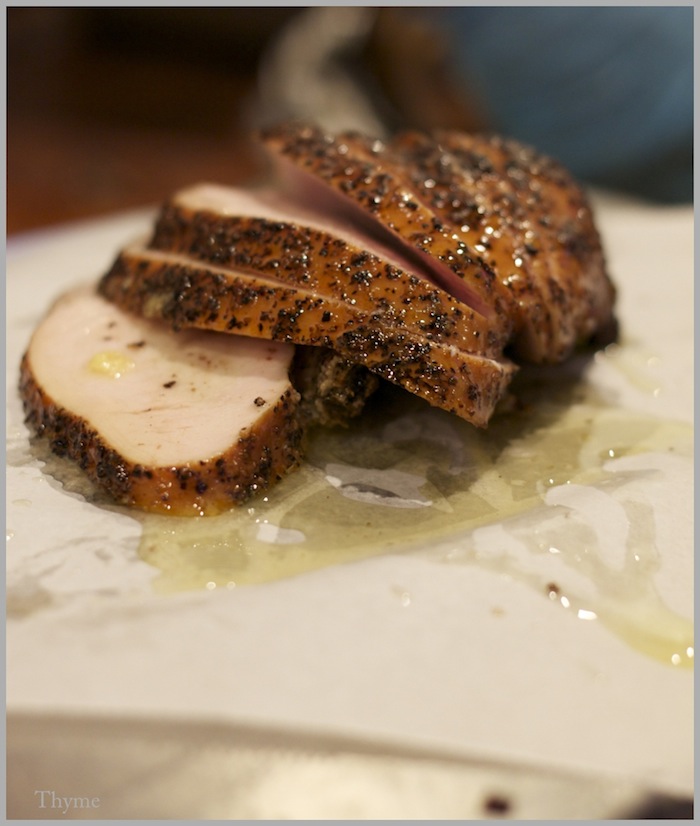 I looked at the line.  I could feel the heat the minute I opened the car door.  We studied the movement of the queue to see if people were whisking in one end of Franklins and quickly out the other.

Not a chance.  No one seemed even bothered by the heat.  People were laughing, chatting, and drinking cold drinks...completely unfettered by the searing waves of shocking heat that registered on my pale white skin.

"What is wrong with these people?" 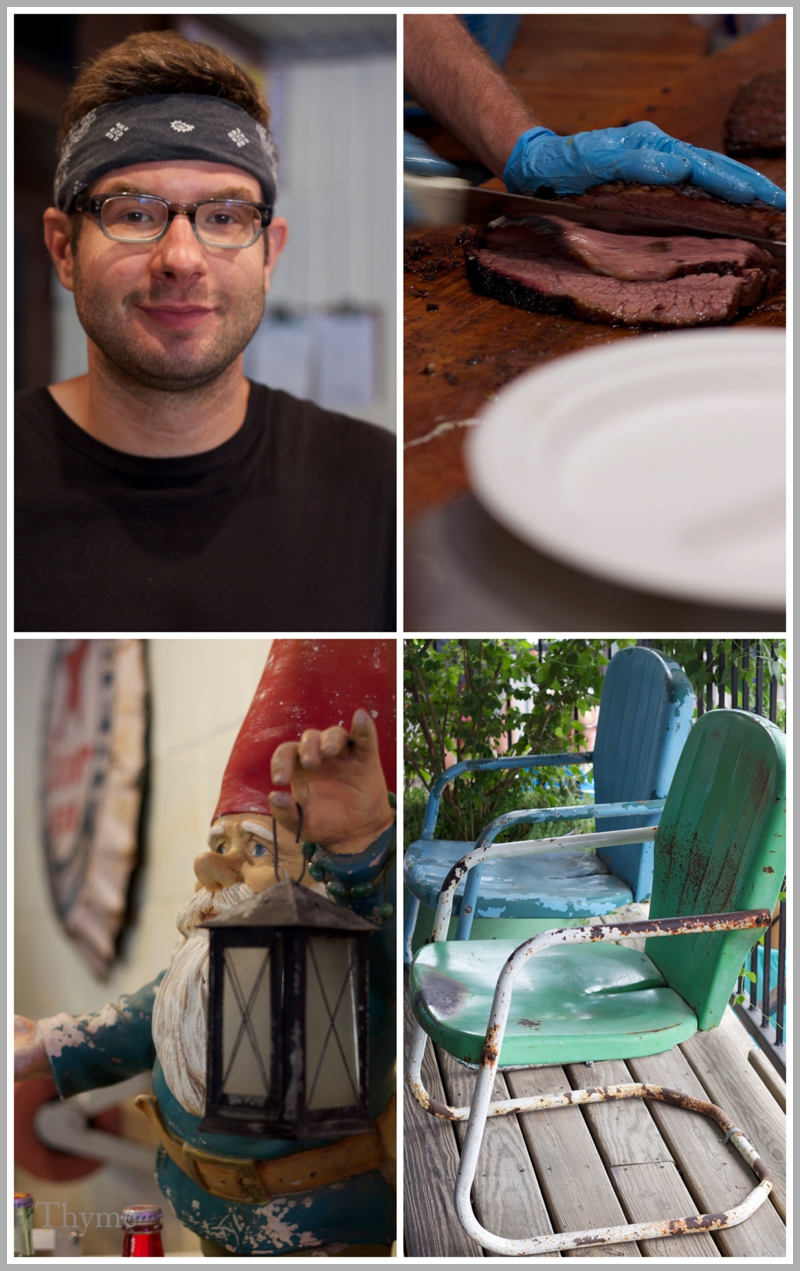 Could barbecue be worth this madness?  Loonatics of the world must make up that line.

We peered carefully at the make-up of the crowd.  They seemed...rather...normal-like. Rather...like us.

Children were in that line.  Some people had umbrellas to cope with the heat waves.

Not one person we spotted seemed deranged, looney, or fool-hardy. 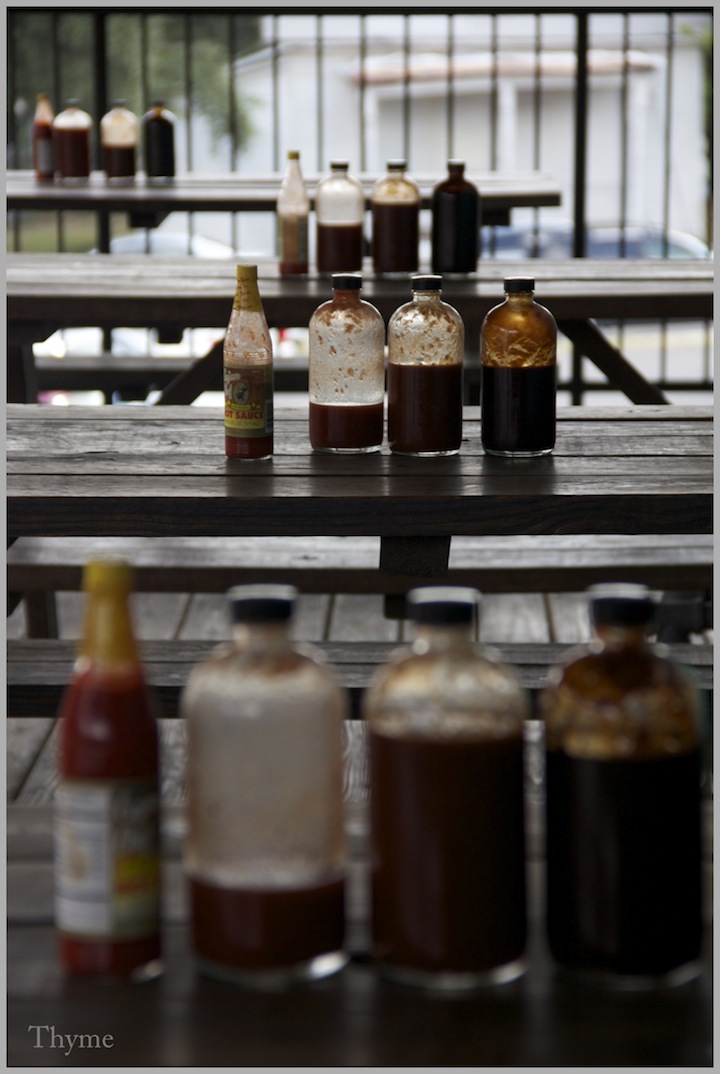 And you know what?  We had a blast.

We chatted with this couple, and that person, and another fella...and had a blast.


Now, about "stud-muffin" up there in the blue T-shirt...  My daughter and I were giggling over his very "GQ-esque-ness-like stance".  What charisma he emanated.  I was truly taking a photo of M. and the heat pounded down on my sweaty hands and the camera slipped to the right...

capturing Mr. GQ ...who must have been on break from a Tommy Hilfiger photo shoot nearby. Oh, la, la...

Franklins in Austin, Texas...to be exact. 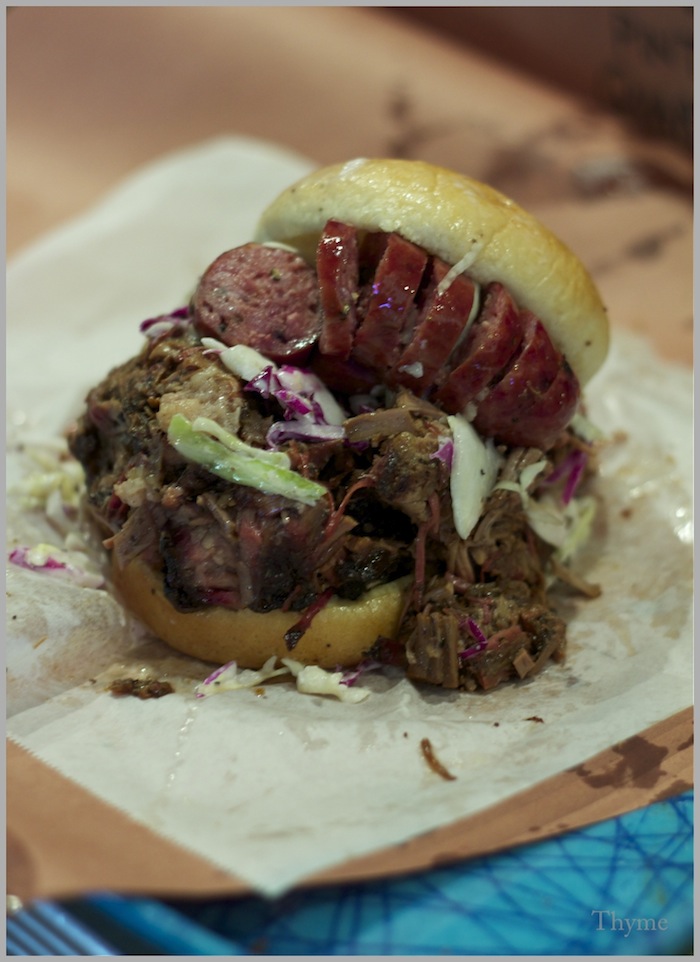 Holy Heartattack!  Look at that sandwich.  That was what the adorable (waif-like couple) in front of us ordered,   They ate the whole thing.

The barbecue scents did a number on us in line.  Blessed coolness hit us the second we were finally able to step foot inside the shade of the restaurant.  We had arrived.

We had made it this far...we were chatting up a storm with just about everyone around us at this point.  Life stories needed to be shared.  We all needed to understand what element of madness caused us all to deliriously wait in such a queue...

in such crazy, sultry, stroke-inducing...waves of heat. 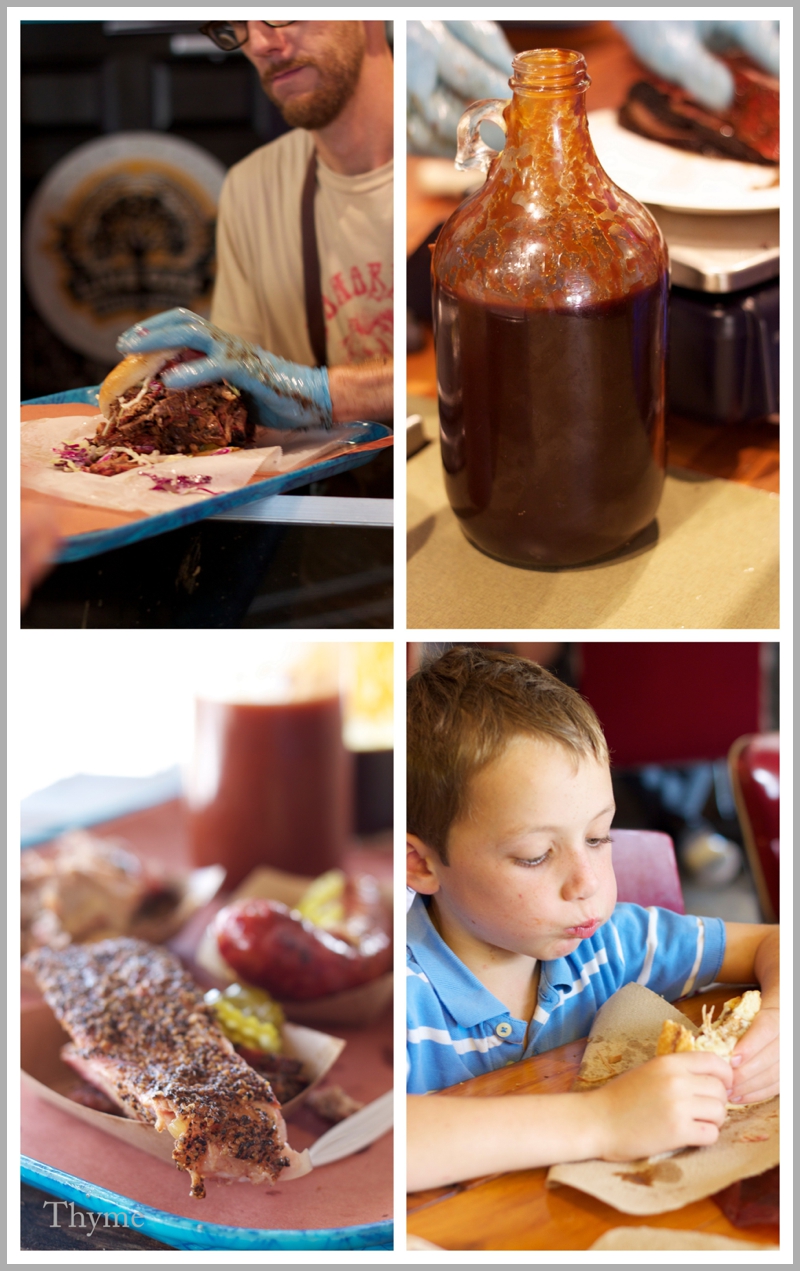 And then it was our turn.  We really had no idea what to order.  We had been so engrossed in swapping life stories with the people around us.

"A few pork ribs please...some pulled pork...some smoked turkey...and a sausage link...or two!"  we robotically chanted as if it was standard practice in our daily routine. We filed through the queue...massive amounts of heart-attack quantites of meat landing with thuds on our little blue plastic tray.

"Were we really going to eat all of this?  Can it really be worthy of the wait, the health risk, and the general hype?"

Yes.  The answer to the golden question is

"Yes.  Yes.  Yes."  Wow.  We thought our little flap steak we barbecued on our flimsy little weber grill was tasty.  It was beef jerky compared to the succulent, smoky, tangy, incredible barbecue that we ate this day at...

The pork rib meat just fell off the bone.  The flavors were smoky and rich.  The meat was buttery tender and juicy.  The aroma was spicy and mouth-wateringly tantalizing.

Carnivores we became. We devoured.  Forget life story swapping.  They were distant memories of shared togetherness.

If you don't keel over by the heat or hear the life stories of the beautiful fellow heat crazed queue-mates, you have the chance to discover the unique experience of what must truly be the best barbecue that this Kenney family has ever tasted.

Skirt Steak on the Grill

1 skirt (flap, hanger or flank stead will also do)
2 tablespoons olive oil
Kosher salt and freshly ground pepper
Grub Rub (Sarah's addition) found in Texas markets
Any steak seasoning will do.  Go with the flavors you like

Place the steak in a nonreactive baking dish.  Brush both sides with the oil and season generously with salt and pepper (and Grub Rub).  Cover with plastic wrap and refrigerate for at least 1 hour or up to 6 hours.

Remove the steak from the refrigerator and let stand at room temperature for about 45 minutes.  Prepare a charcoal or gas grill for direct-heat grilling over high heat, or preheat a cast-iron stove top grill pan over high heat.  Place the steak on the grill rack over the hottest part of the fire or in the grill pan, and cook without moving it for about 1 1/2 minutes.  Turn and cook until an instant-read thermometer inserted into the steak registers 130º-135ºF (54º-57ºC) for medium-rare, 1-3 minutes more, or to your desired doneness.  Transfer the steak to a platter and let rest, loosely covered, for about 5 minutes.

Cut the steak across the grain and on the diagonal into the slices and about 1/2 inch (12mm) thick.  Arrange toppings and heat soft tacos and serve!