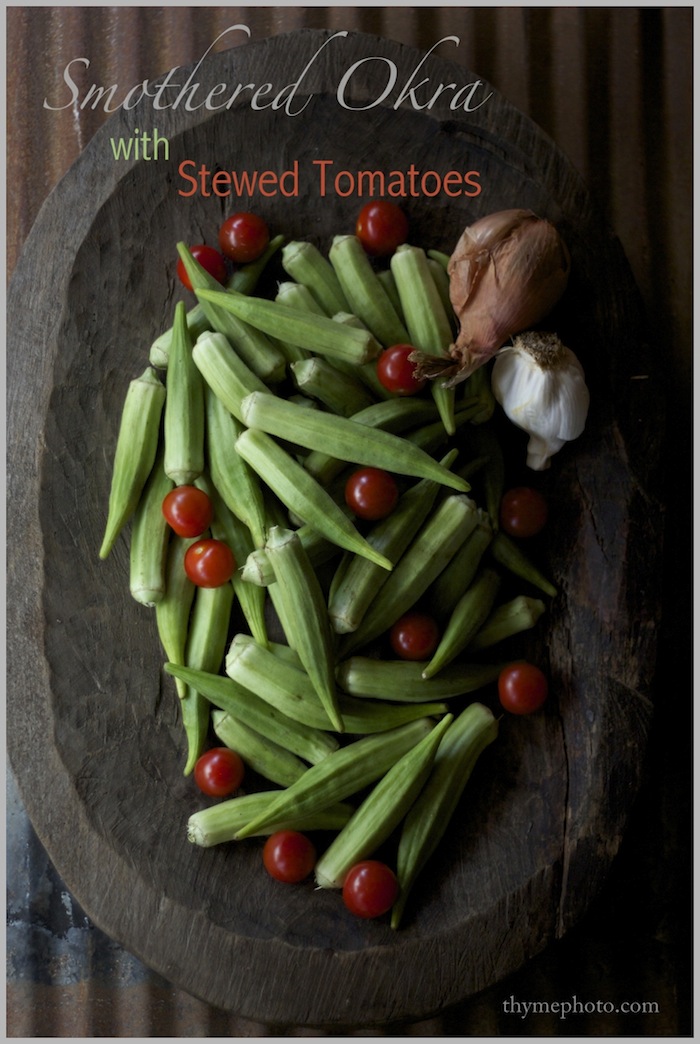 I headed back to my home town this past weekend.  One of my oldest and best friends was also going to be coming in so we planned a long awaited and much anticipated visit.

I knew I was in store for good food and good friends in Louisiana...the food of my childhood that, like no other, stirs my soul.


One southern cajun dish that appears frequently on our table is "smothered cajun okra".  When cooked slowly for a long time, okra loses its toughness, becomes silky smooth, pairs well with stewed tomatoes and onions and of course...cajun spices. 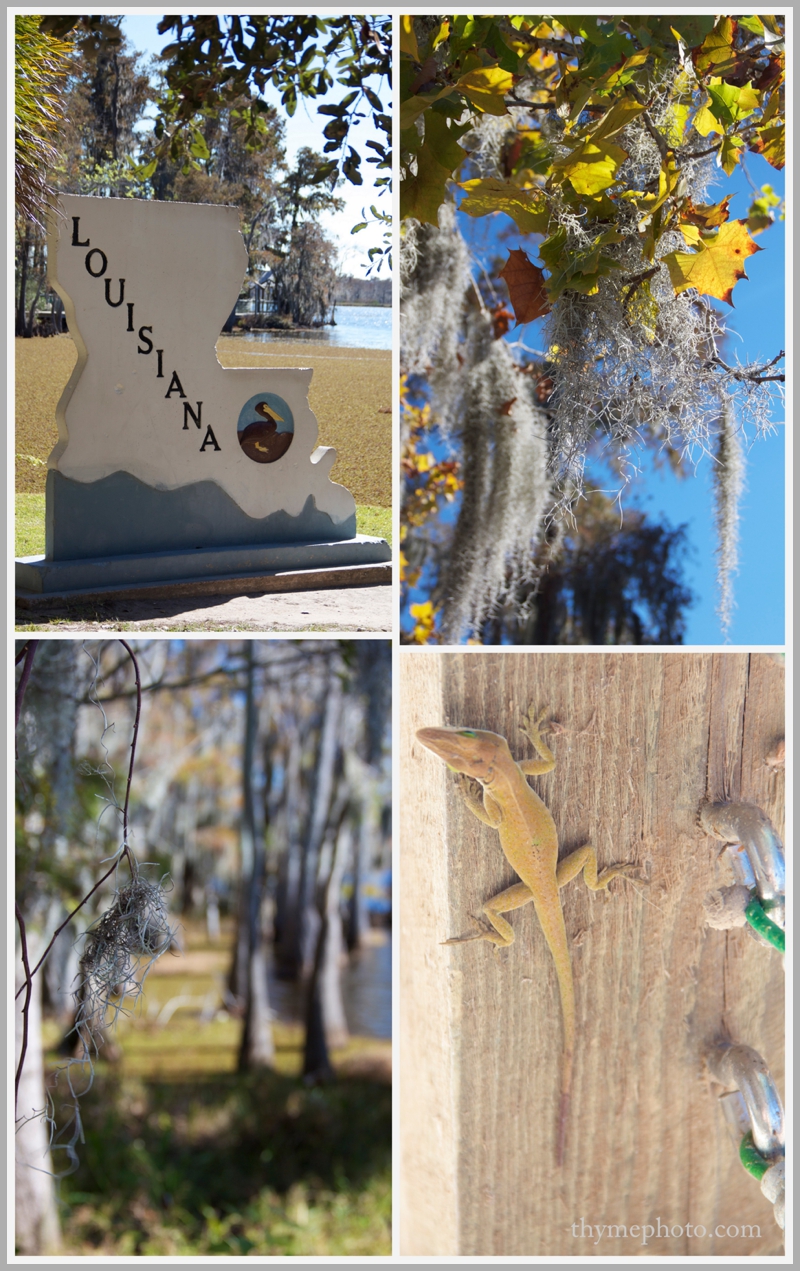 The swamplands of southern Louisiana tell so many stories about the people who struggled to survive in this humid marshy environment after leaving France, fleeing Nova Scotia after Britain took over, and eventually migrating further and further south.  In the desolate wild swamplands of Louisiana, anything and everything was up for grabs and often landed on the plates  of the Acadian, or "cajun" people who survived the trek.

Due to the freedom from taxes and oppressive regulations that their fellow frenchmen were suffering, many new "cajun" families began bringing over their relatives from France.  Thus, the french influence continued to grow in southern Louisiana.

And that is how my family ended up there. 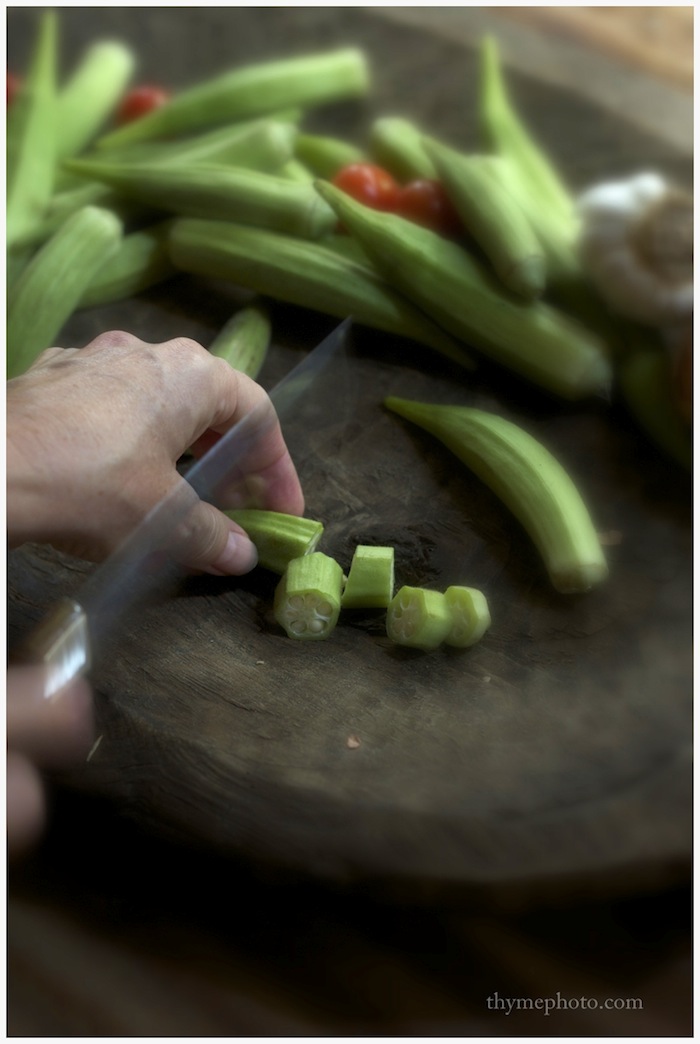 Decades later, a heavy dose of french heritage, a mix of Caribbean, Spanish, and African American cultures...and what a melting pot of cuisines evolved from the food, animals, and... ahem...critters (crawfish, turtles, etc.) that were abundant in the area.

Along the long flat highway from Texas to Louisiana lay several clues as to the seasonal offerings of this southern stretch of farmlands.

Whereas most farmer's markets are closing shop for the winter season, several stands are just opening up in s. Louisiana and Texas. 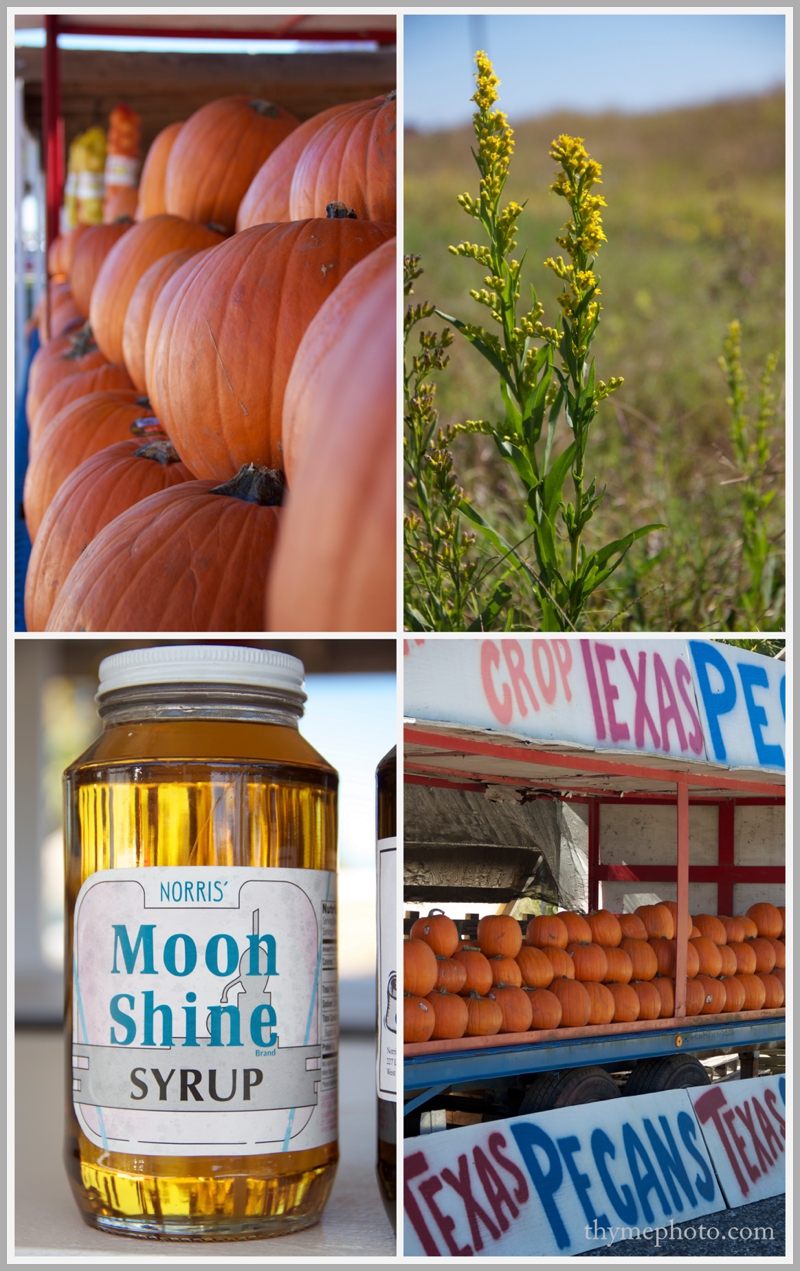 No, it isn't pumpkins that come from the south!  Texas grapefruit and Louisiana satsumas (little oranges...like mandarins) are in season right now and farm stands are teeming with them.

...and pecans (Puh-khans...NOT... Peeeee-cans) are falling from the trees and are sold in huge bags to usher in the season of pecan pies and pralines. 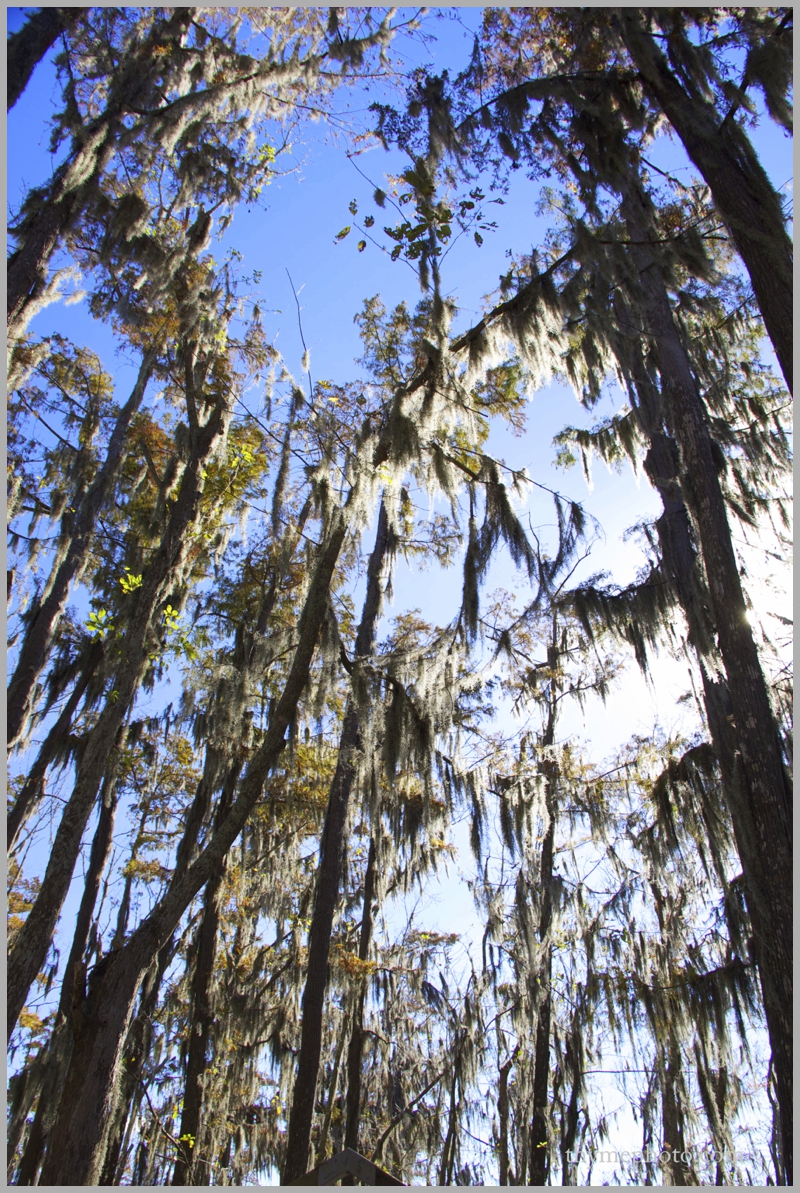 Several stops along the drive offer peeks into the world of the swamplands.  Beautiful, alluring, mysterious, and peaceful all describe the ebb and flow of the waters that lap up against the many moss covered trees towering into the sky.


Once the Louisiana border is crossed...it doesn't take long before the signs start beckoning the curious epicure. 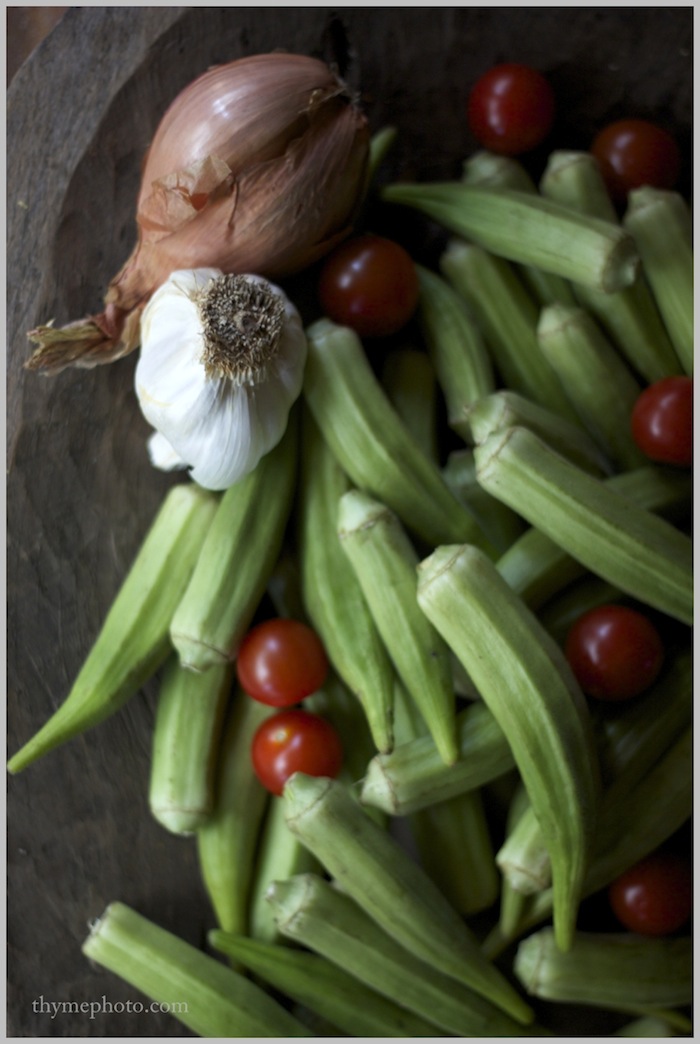 I revel in the culinary explorations of my southern heritage.  I was born and raised in the south but haven't really returned since my late teen years.  I see everything with adult eyes now and years of life experience in between.

There is no place in the U.S. like the south.  Now, I'm not saying that is a positive thing!  No, there is definitely the good, the bad, and the ugly when it comes to deep southern Louisiana.

But, the people there are fiercely proud of their food, culture, and way of life.  They love nothing more than to stand over newcomers as they take their first bite of boudin or first slurpy spoonful of seafood gumbo to note their reaction. 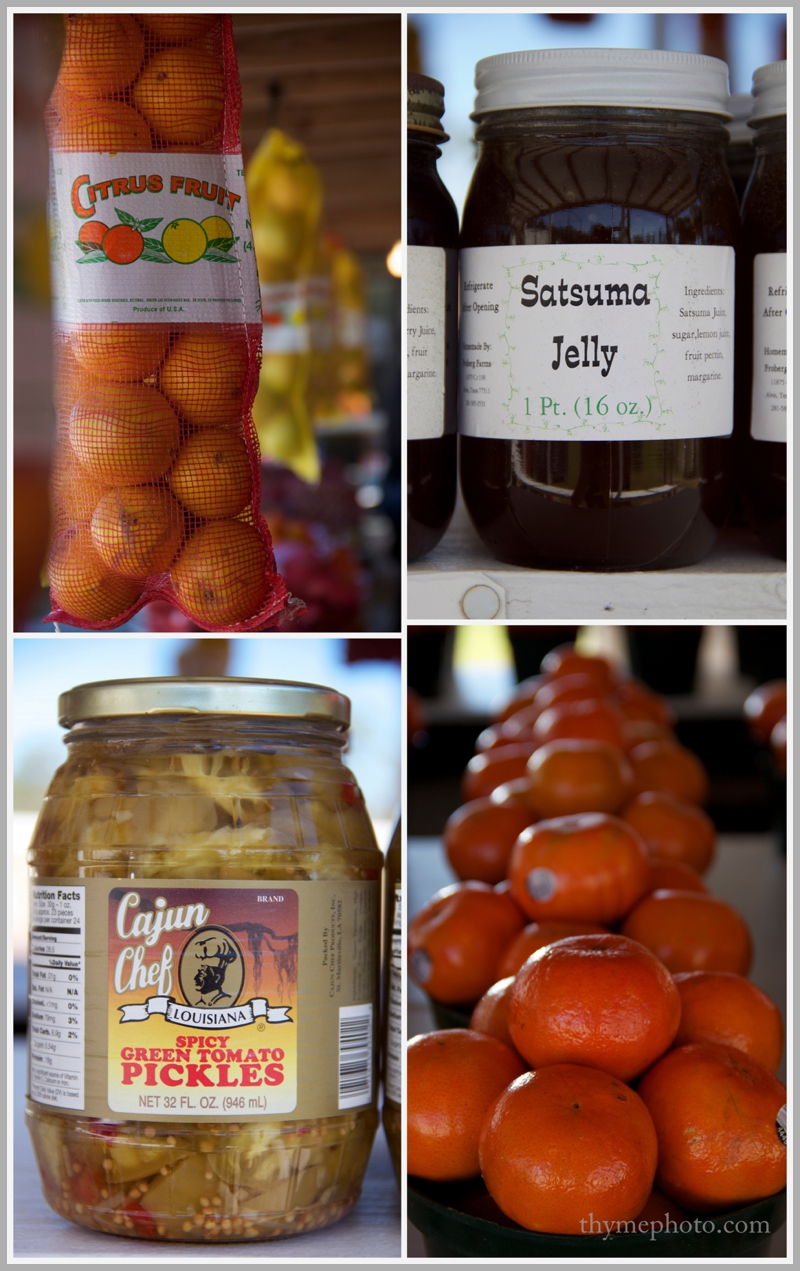 Basically, the cajuns of Southern Louisiana were left to their own religion and culture with little influence from the rest of the country for several decades.

Thus, they are a fiercely independent bunch of people but remain close-knit, locked in their ways, and happy in their own little corner of the world. 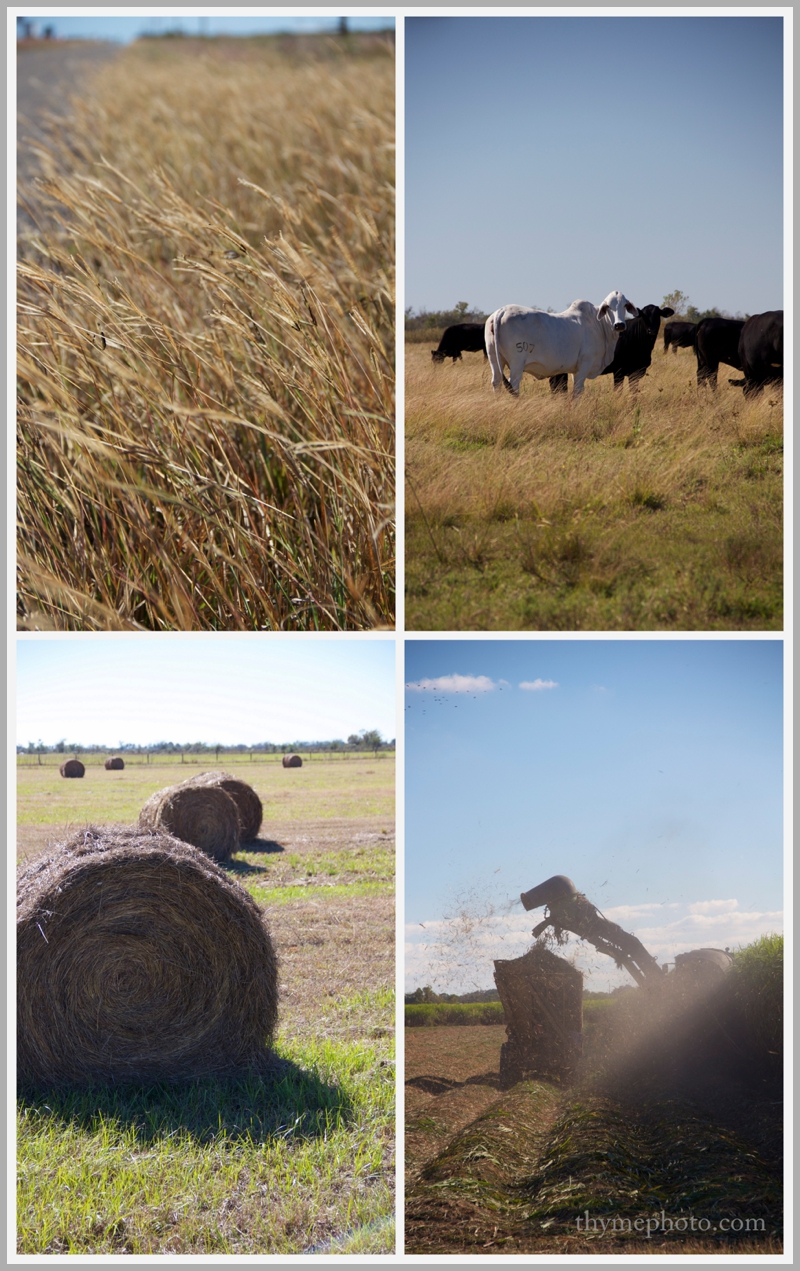 I passed some large tractors chopping down sugar cane.  This made me chuckle and recall school field trips to the local Tabasco factory.  Yes, our field trips were to places like the Tabasco hot sauce factory!

On the ride home, the nuns would hand each of us a stalk of raw sugar cane.  It was tough like bamboo.  But, if you peeled back the outer layer, and chewed with gusto on the inside pulp, the sugary juices would be released.

Sugar cane stalks in hand, lots of jaws grinding, and a bus full of very quiet girls happily rode back with our little bottles of Tabasco sauce tucked in our pockets. 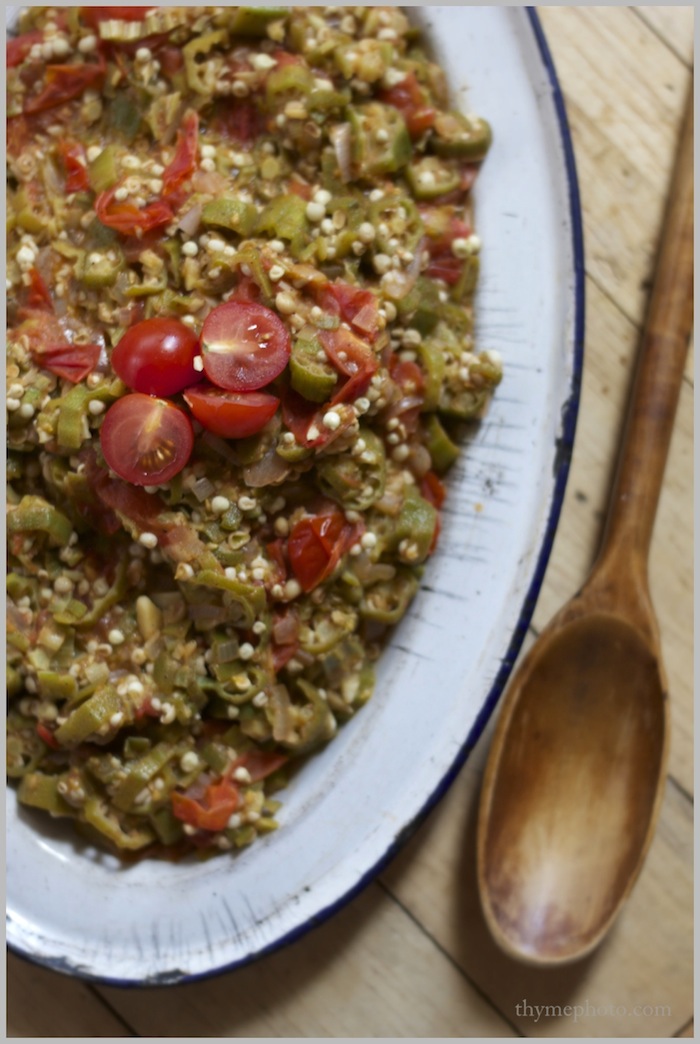 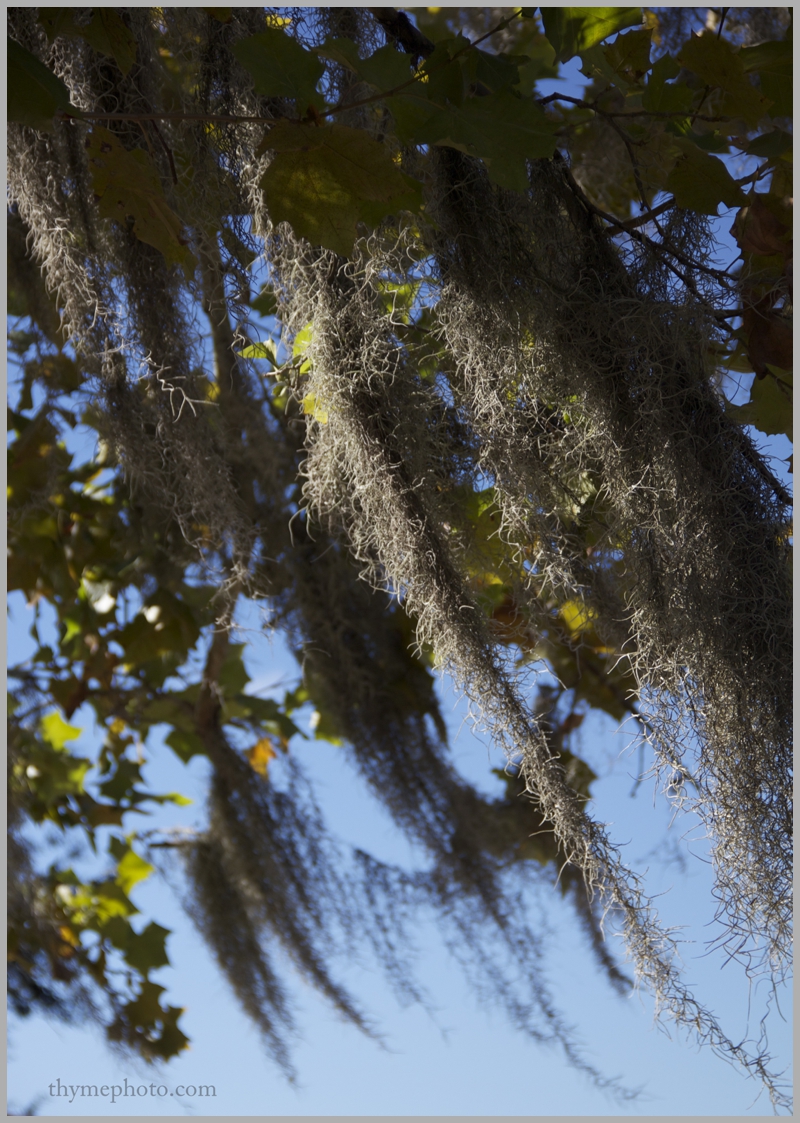 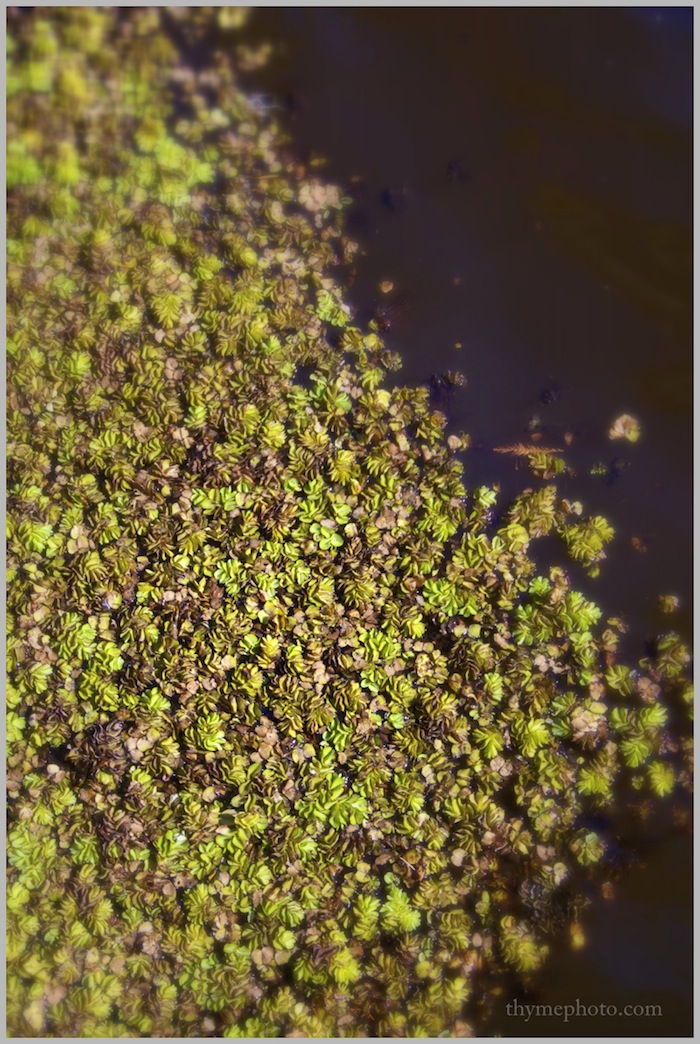 I had heard about a B&B in Louisiana called "T'frères House".  It was owned by the renowned owners of a popular restaurant called Chez Pastor.

What a delightful choice to enjoy authentic cajun hospitality.  Pat and Maugie Pastor, now retired from the restaurant business, welcome travelers to their family home with flair and panache. 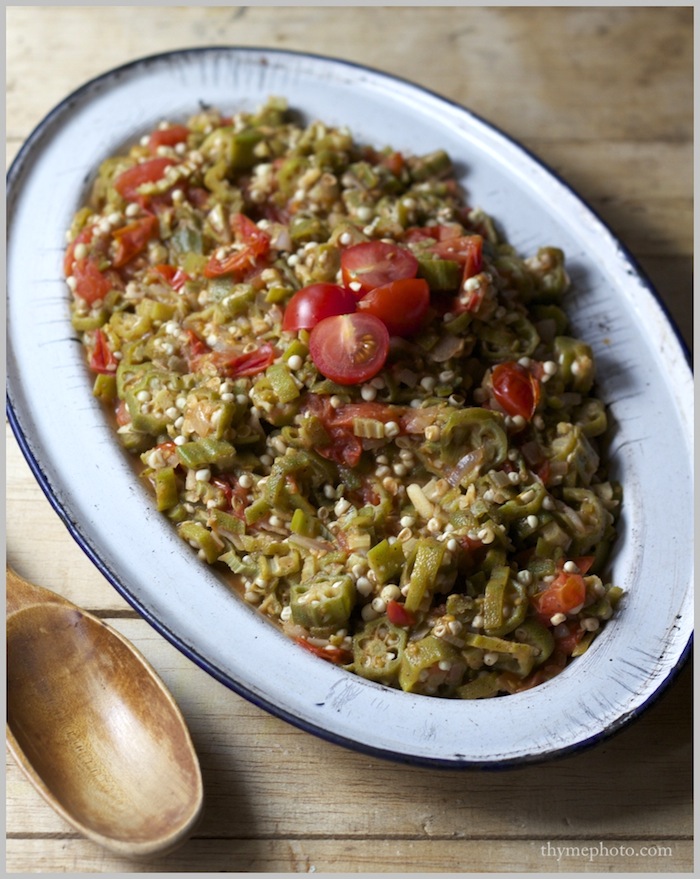 T'frère's B&B was built in 1880 and is filled with wonderful southern paintings depicting cajun scenes from the area.


Mr. Pat greets guests at the door with his thickly accented cajun french.  He is filled with story after story of life in southern Louisiana and is a treasure trove of information about the food culture after running a successful restaurant for so many years. 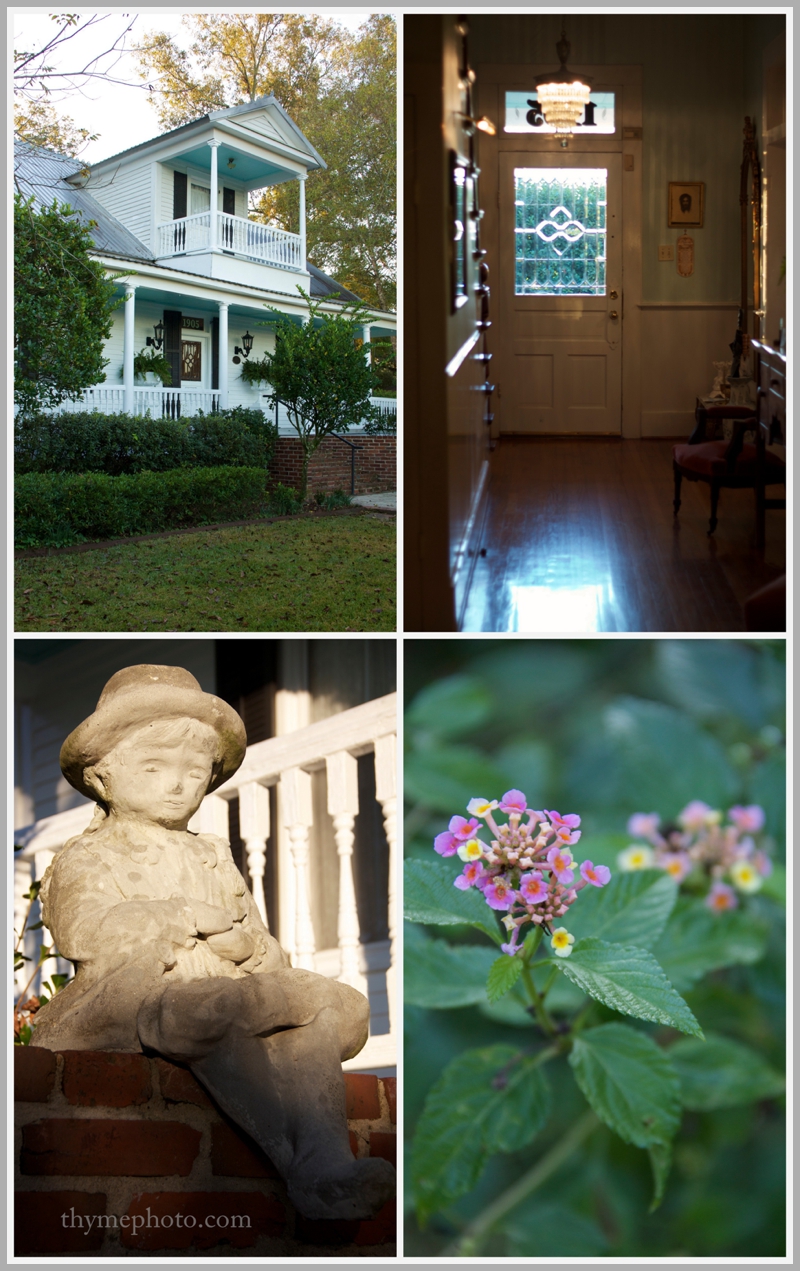 One of their specialties are the "T-Juleps" and "Crab Crustards" that they serve at twilight each evening.  It is a  wonderful way to finish the day, sit and chat awhile, and relax on their back porch talking about the day's activities with other guests. 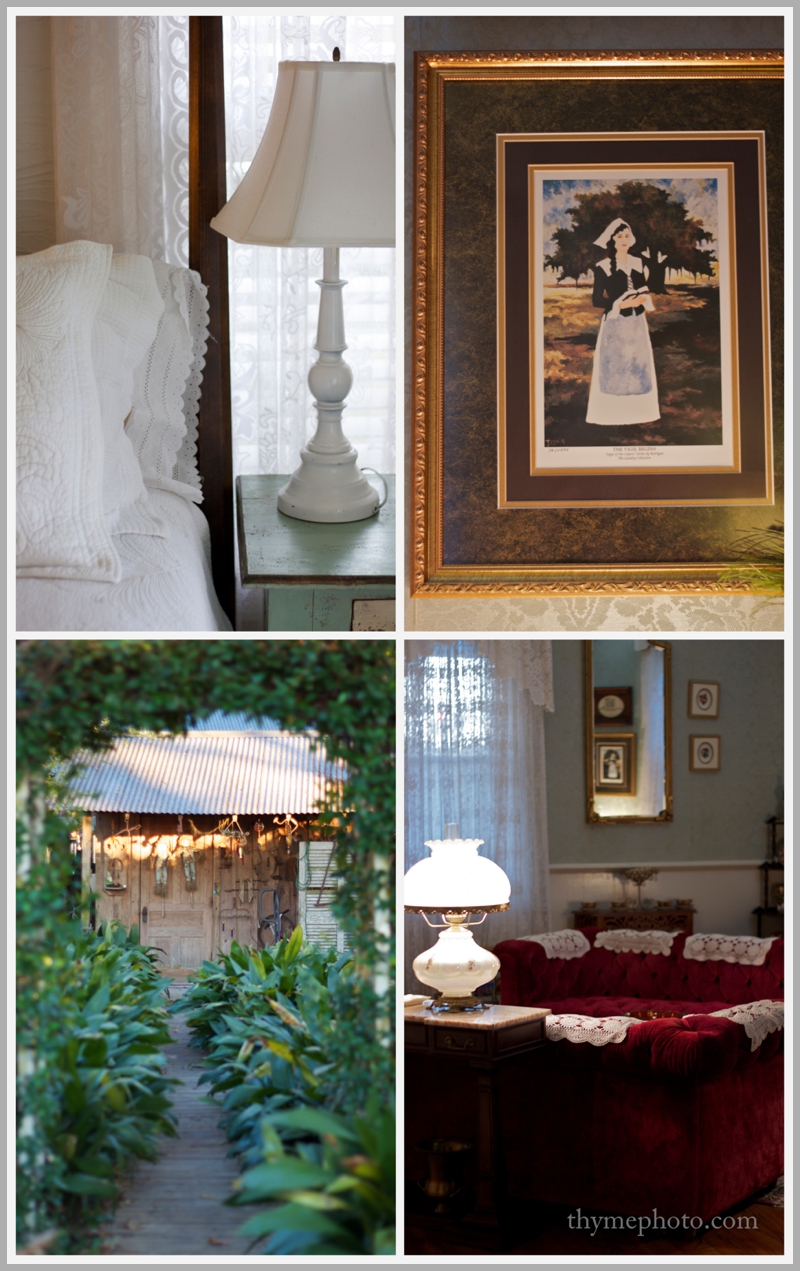 Scenes of the relationship between the diverse cultures of the history of the south are present everywhere.  For example, "Hattie" from "Gone with the Wind" is proudly sitting in a portrait over the kitchen fireplace.

I can't explain easily the relationships that defined the period of slavery, as well as dominated the lives of people well after the Civil War in the U.S.  It is a complicated one.  It is a beautiful one.  It is an ugly and humiliating one.

For me, the movie "The Secret Life of Bees" best represents the relationship and understandings that were defined during my childhood experience.  I do see changes in the south...but change happens very slowly in this part of the world.  It remains a culture that I will always cherish but will always be bewildered by, and probably never  unravel or fully accept. 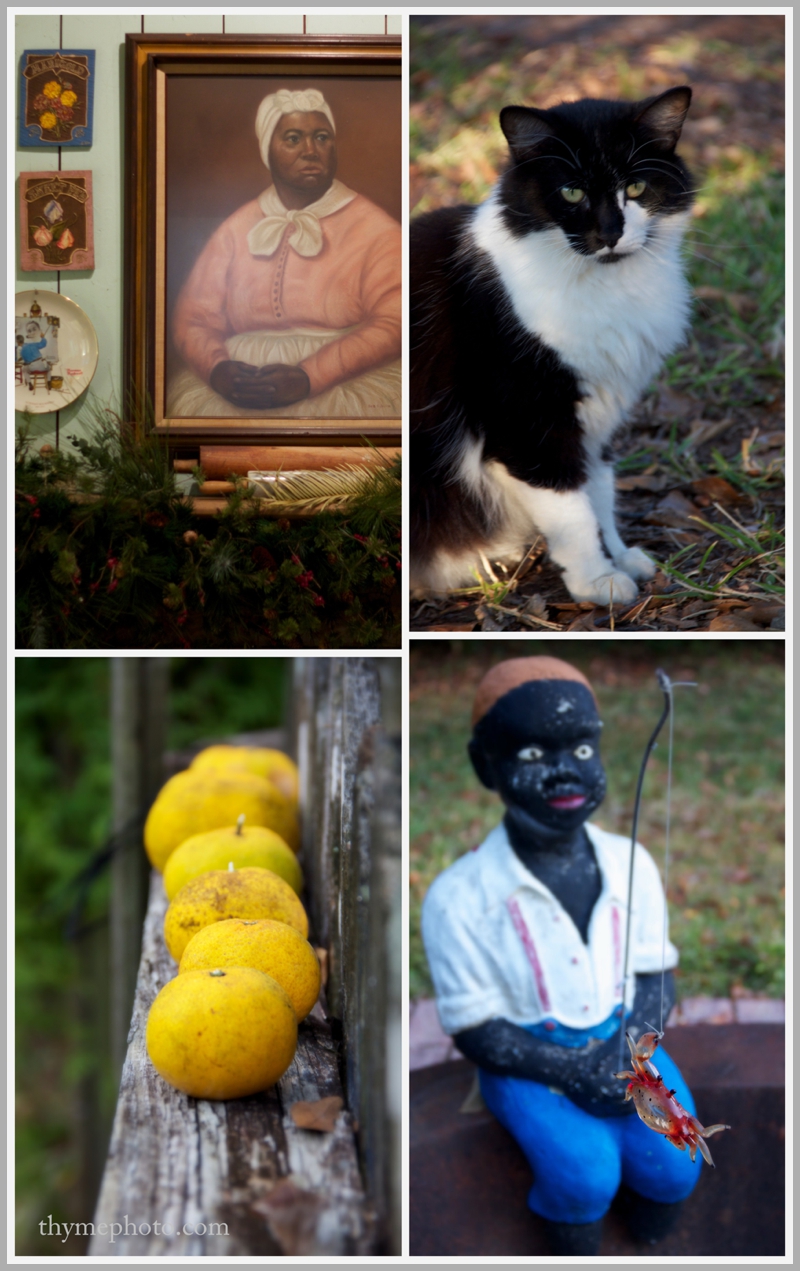 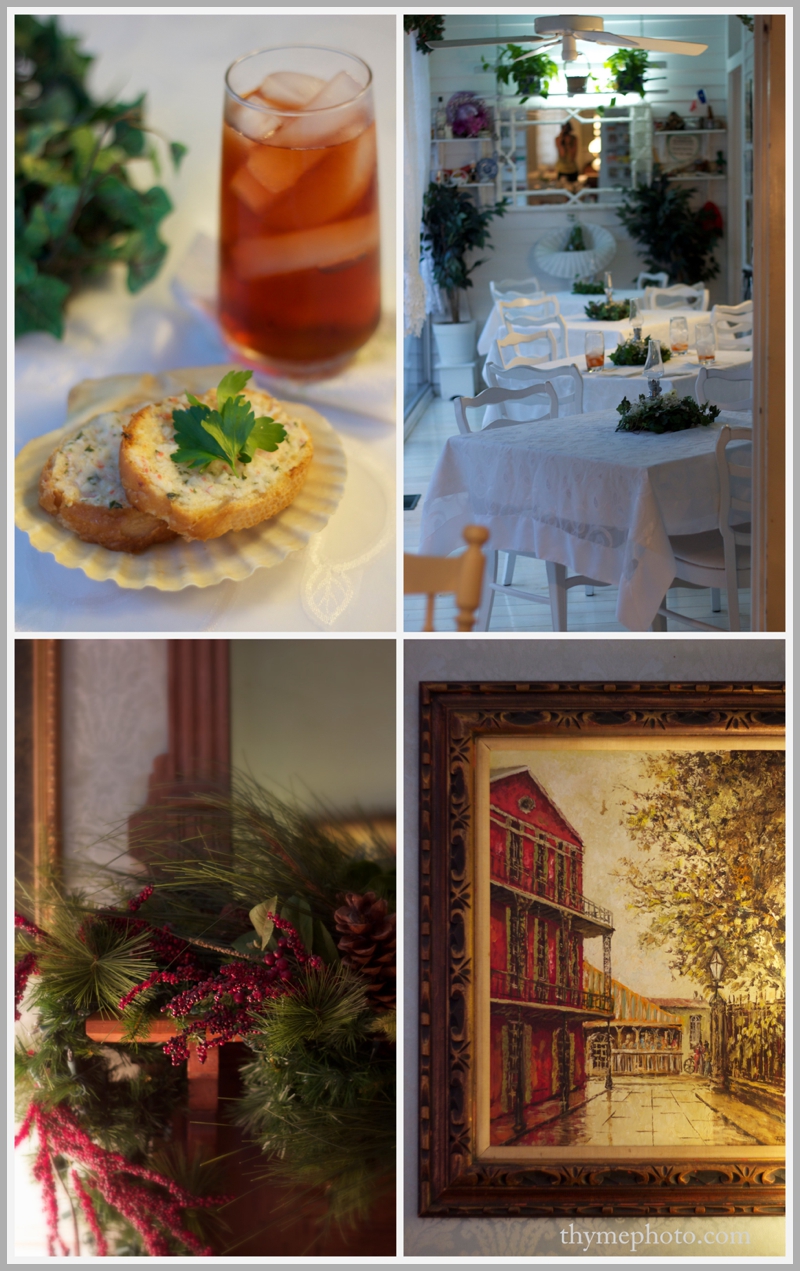 T'frère's house is a tranquil little spot in the middle of a city that is stretching and growing at a rate that has not been experienced before.

Pecans can be heard thumping onto the ground, the oak trees sway mightily overhead, and the house stands proud and full of history from a time gone by. 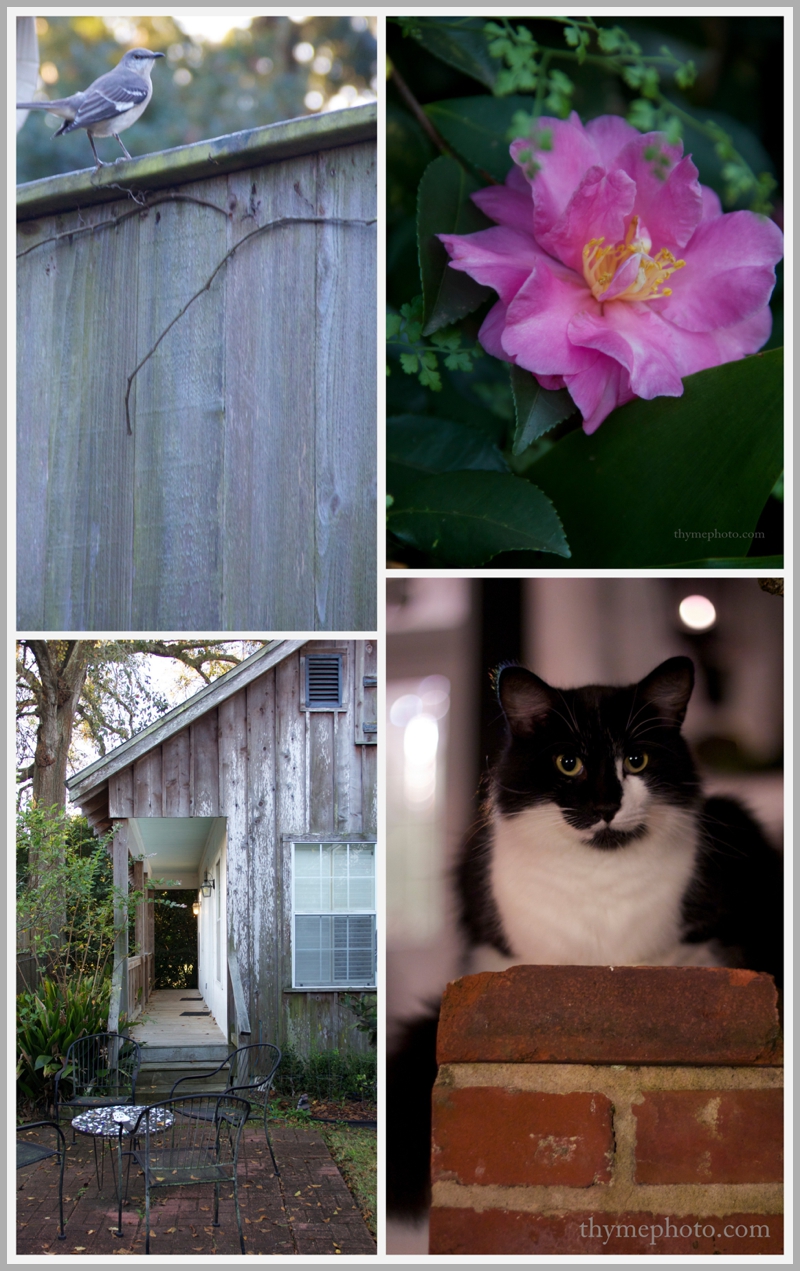 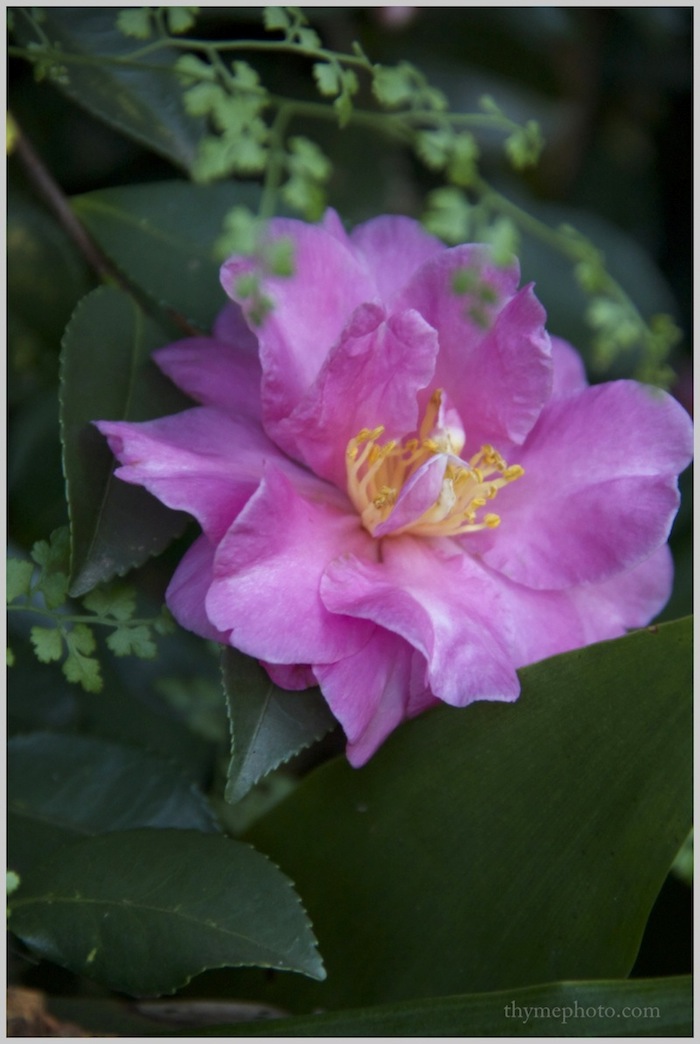 The "Ooh La La" breakfast is an occasion full of smiles and tradition every morning.  Mrs. Maugie bustles about in the kitchen getting the trays ready...wearing her signature red silk pajamas.

My childhood friend and I had such a wonderful weekend.  We enjoyed touring around the city noting areas that are the same and so many areas that have changed.

It seems it was just a snap away that we were running around school together eating Ding Dongs and dreaming about our futures.

We marvel at the cajun culture today and how much of it centers around good food, good friends, and good times. 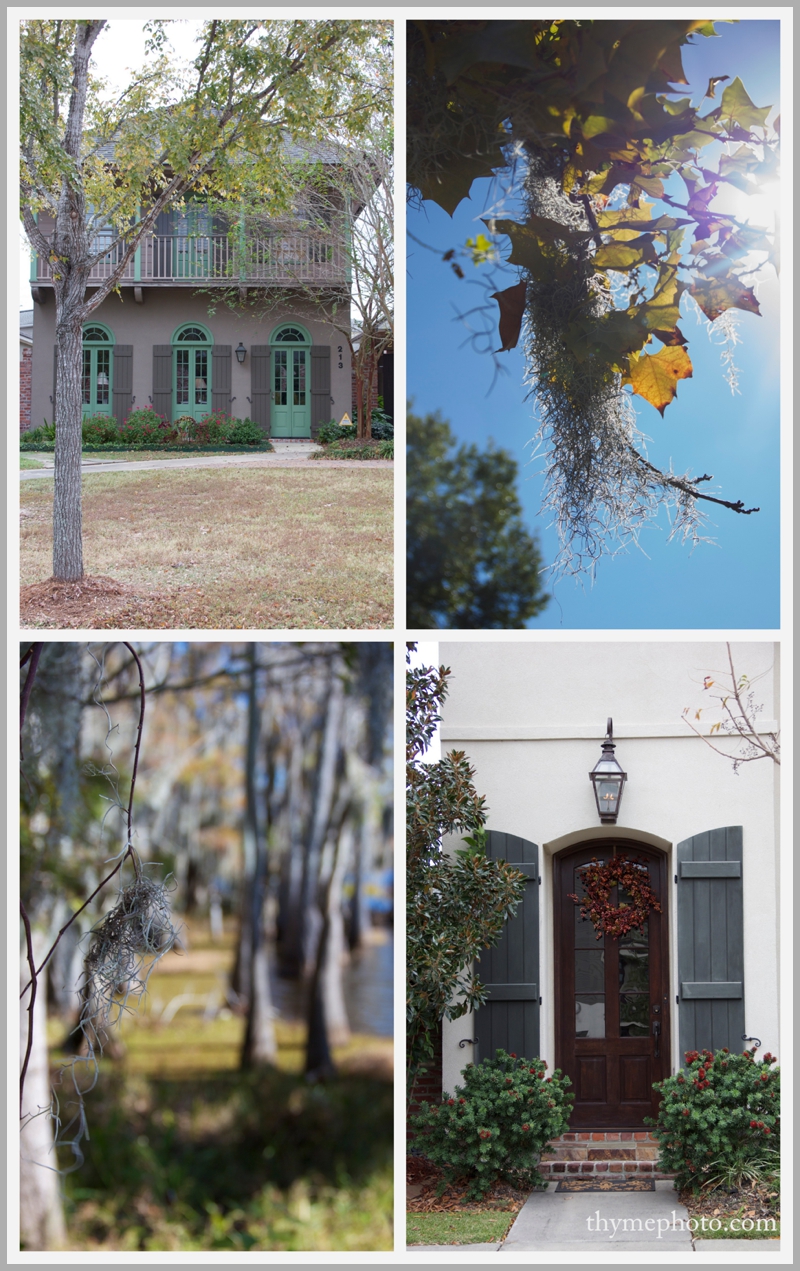 As I head back to Texas, my heart is full, heavy, sad, but content.  So wonderful to connect with special friends.  My friend and her family were such rocks to me when I needed something to cling to at points in my life.  Their generosity and support of me is something I'll forever hold dear.

And then there comes the big, bold, brassy sky of Texas!  "Oh, La, La" is what I mouthed!  Always the captivating skies over that grand city of Houston to welcome me to my newly adopted home! 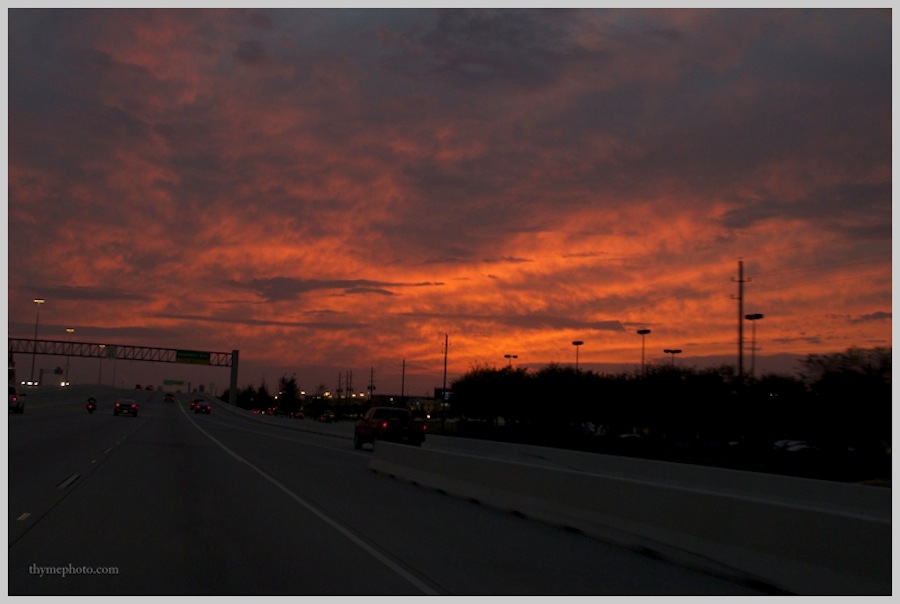 1 lb okra, chopped1 tablespoon oil1 (16 ounce) can whole tomatoes, with juice1 cup chopped onion1/2 cup bell pepper, chopped3/4 teaspoon chopped garlicsalt and pepper
"Slap Ya Mamma" spice is popular in S. Louisiana!!
(optional:  cajun spiced shrimp added in the last 5 minutes of cooking)
Directions:Pour oil in bottom of pan.  Add the remaining ingredients.Cover pot and simmer 1 1/2 hours on low, stirring often.  It will be slimy at first but after cooking the sliminess will disappear.  Add splashes of water if it begins to stick too much.  the okra should "brown" a little bit at the bottom of the pot.  This is good as it gives a wonderful smoky flavor and caramelization to the dish.Remove the cover the last 10 minutes.  Add dash of cajun spices.  Add optional spiced shrimp if desired.