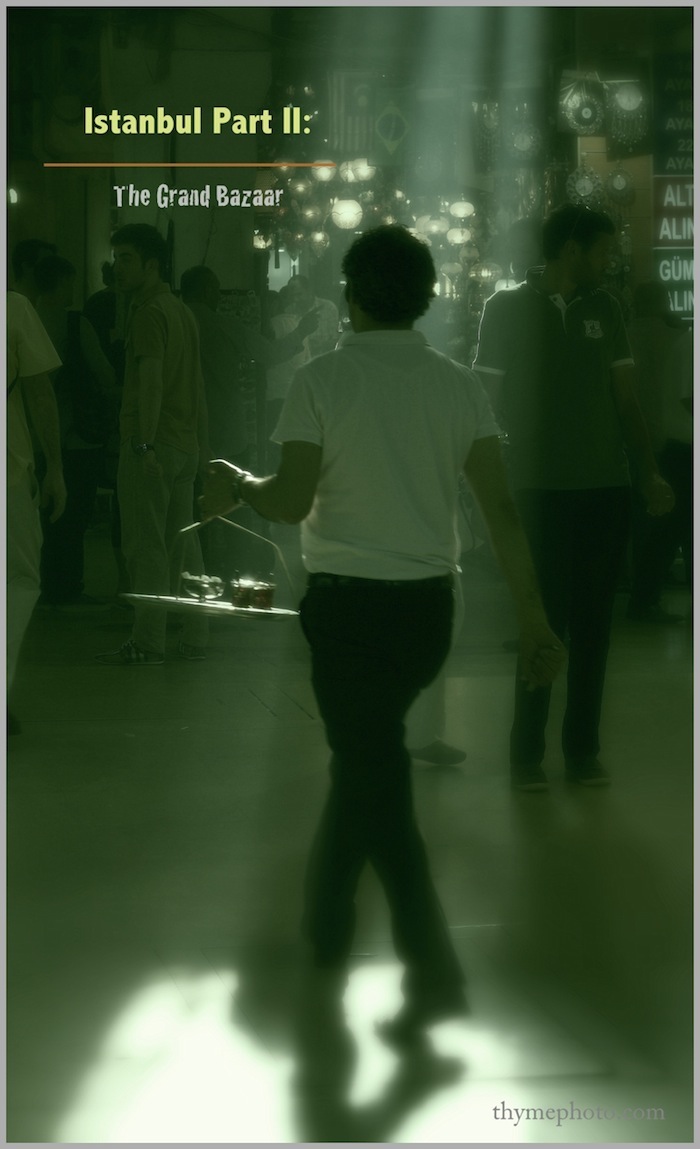 The sights, the smells, the sounds of Istanbul...already have me bustling around in my kitchen...trying to recreate some of the dishes that we enjoyed in this dynamic and ancient city.

One such dish was Turkey's beloved "Köfte" Meatballs, so I thought I would start there.  Even though these meatballs are not necessarily cooked on skewers I pulled out my hardly used Kebab skewers and combined the method of kebabs with the köfte just to have fun with this recipe (and, ahem... to use my skewers...) 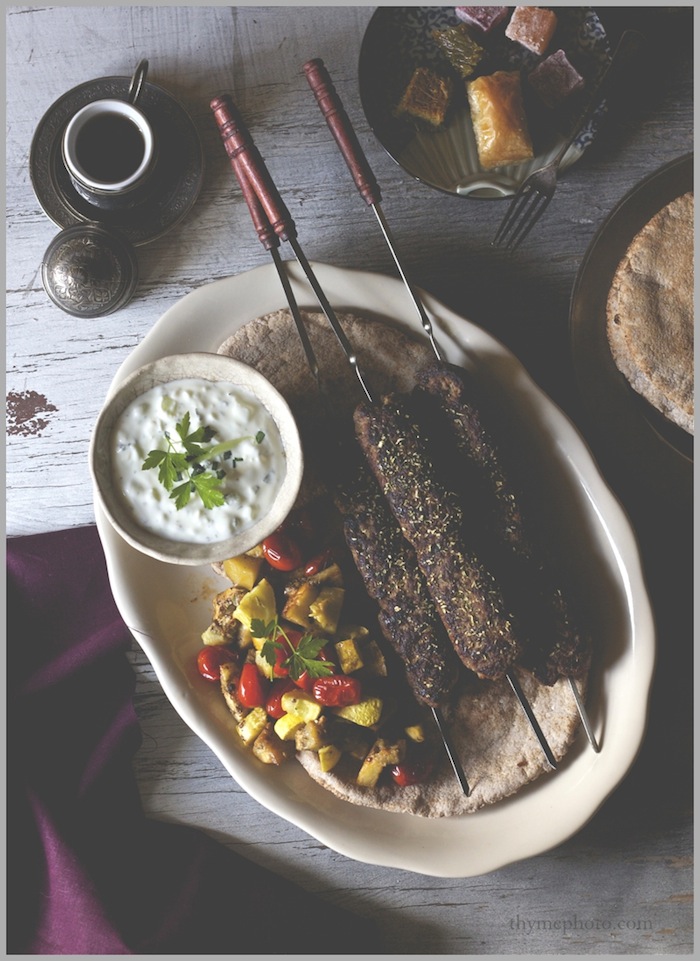 For me, the power of reliving a journey through the food that makes it unique creates a deeper awareness of the aspects of that culture. The spices hand mixed into the meat, the headiness of the lamb's aroma sizzling on the grill all combine wonderfully with tangy creamy Greek yogurt and  smoky caramelized roasted vegetables. This meal was  a wonderful combination for a variation on the summertime BBQ here in Texas.

So while other families were grilling up the traditional Memorial Day fare, the Kenney's were down here, in steamy hot Texas, sizzling Turkish "Inegol-Style Köfte" Meatballs.

While chopping the cucumbers and snipping the parsley from my herb pot, my mind drifted back to the surreal days of walking the bumpy cobblestone streets of Istanbul, trying our first tiny sip of the thick dark Turkish coffee, and tucking into crispy bites of freshly made "kunëfe", savoring the crunch of the shredded filo dough against the creamy mildly sweetened cheese inside.

And of course, my mind swings to the morning we spent ...at The Grand Bazaar of Istanbul!  How to begin describing this experience?  In part, we hesitated to enter the den of mass trading, shopping, and wheeling and dealing that encompasses the activity of the Grand Bazaar.  But, on the other hand, we knew we'd be sucked into the parade of goods, throngs of tourists, and tray after tray of Turkish delights that delight and dazzle the eye.

The energy, the vibe, the pulsation, the cacophony of this ancient den of trade corridors, alleyways, and back streets continues to vibrate today without pause within the twisting and turning of the many ancient walls of the Grand Bazaar.

Is the Bazaar a tourist trap?  You bet it is!  Surrendering oneself to this reality is half the enjoyment of being caught up in the volley of taunts and catcalls that are supposed to endear the innocent tourist to seek out and purchase the goods for sale inside.  (Insert major eye-rolling here) 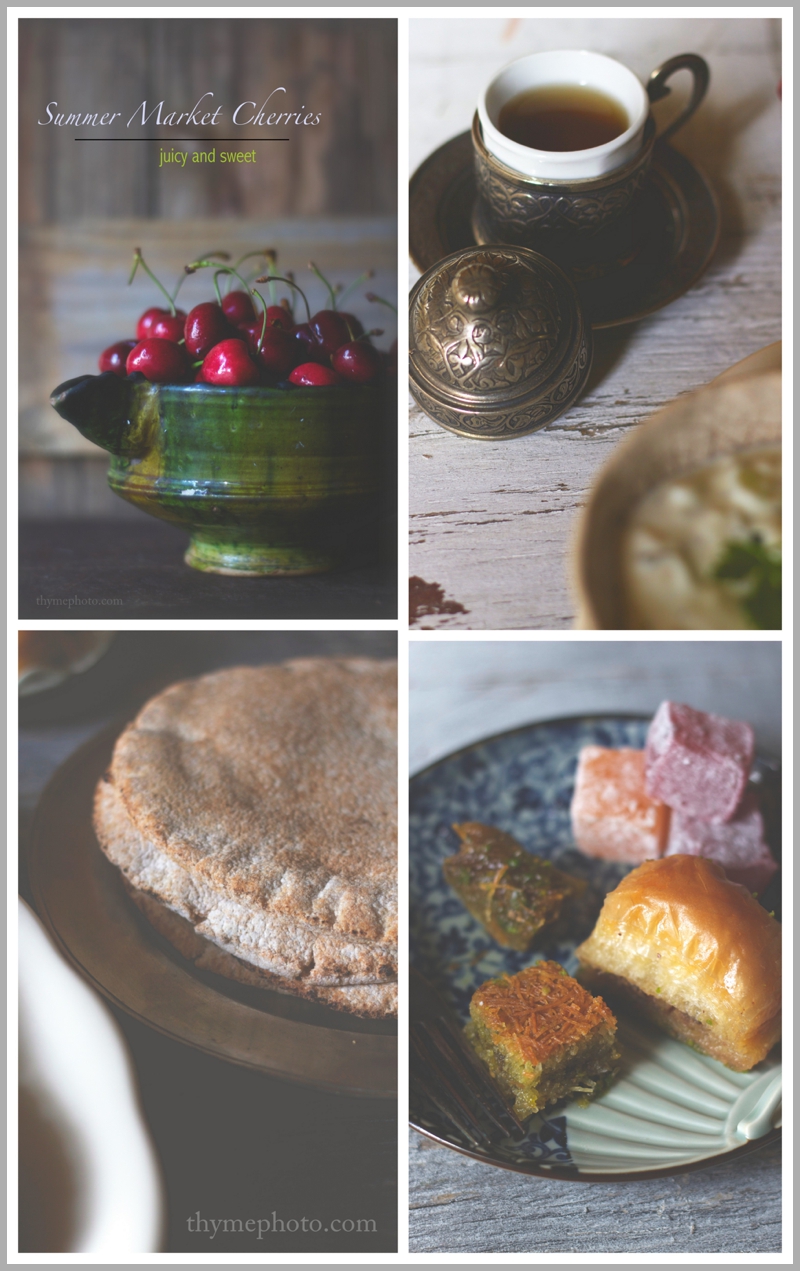 So back home in Texas, we sat around our kitchen table and brought a little of the historical spice trade to our table. I patted out and spiced the "Köfte" meatballs, mixed up creamy yogurt sauce to be wrapped in soft pita bread and chopped eggplant, tomatoes, and squash to be roasted and we reminisced about the craziness of the Istanbul Bazaar and the frenetic pace of Istiklal Cadessi Avenue.

We picked up fresh cherries at the market for our "Köfte" meal. Many vendors in the back streets around the bazaar were selling delicious juicy cherries.  I think we went through a bag a day of cherries on the trip in order to help stay hydrated and because...they were so delicious. 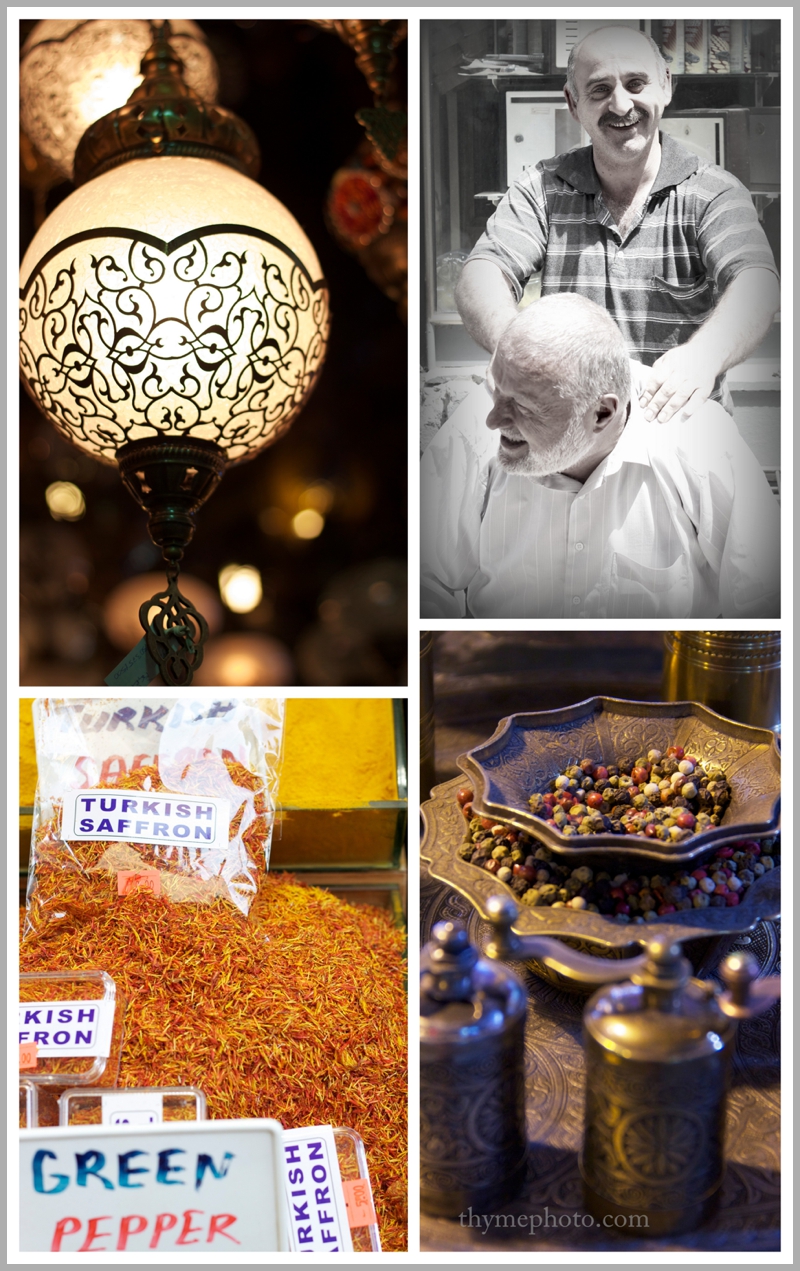 After a good hour, once the grand tour of the main building was conquered, getting out into the narrow side streets that twist and turn is like running a lead pencil through a "find the hidden treasure" maze but not really knowing what the treasure will look like when that pencil tip finally reaches the other end.

Everyone knows you are a tourist...but you know what...no one really cares, if you don't care.  The eye-candy of sights, people, smells, and rumbling of activity is a thrilling highlight of venturing off the beaten path. 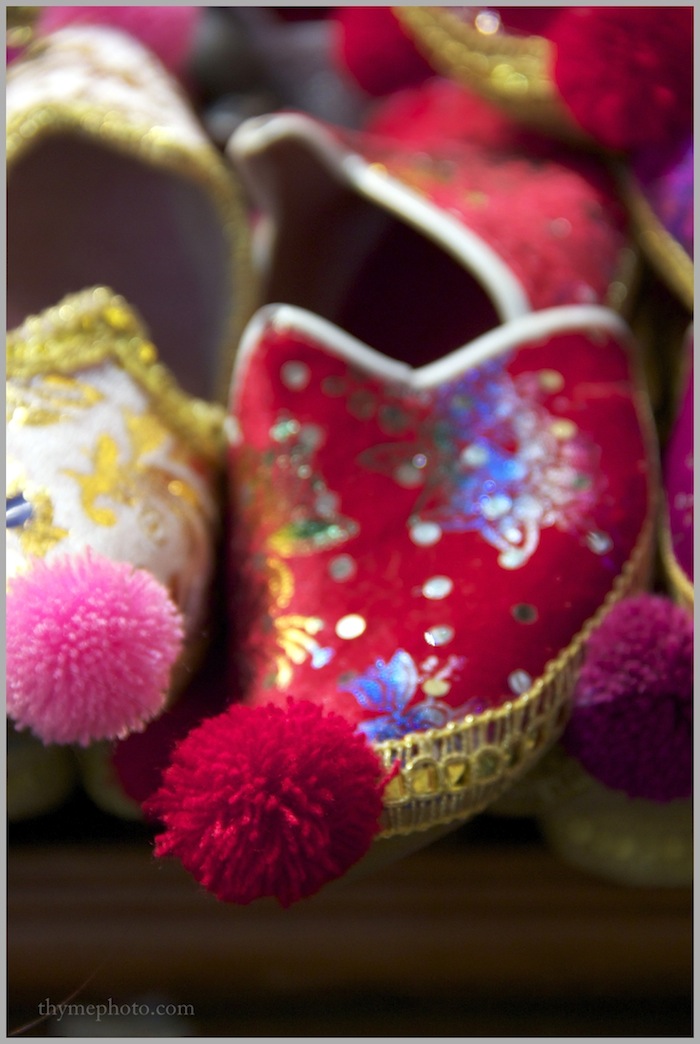 It required circling the bazaar several times and getting lost in the labyrinth of pointy toed slippers, lokum stalls galore, piles of pewter and brass tea sets, stacks of floral embroidered pillow cases, and bundles of leather goods before we ventured out into the surrounding alleyways.

At times, being in the bazaar felt like we took a trip into the "Alice in Wonderland" novel after she fell down the rabbit hole.   Glass tea cups brimming with hot tea precariously balanced on tea trays see-sawed their way with expert precision through the slow moving crowds. 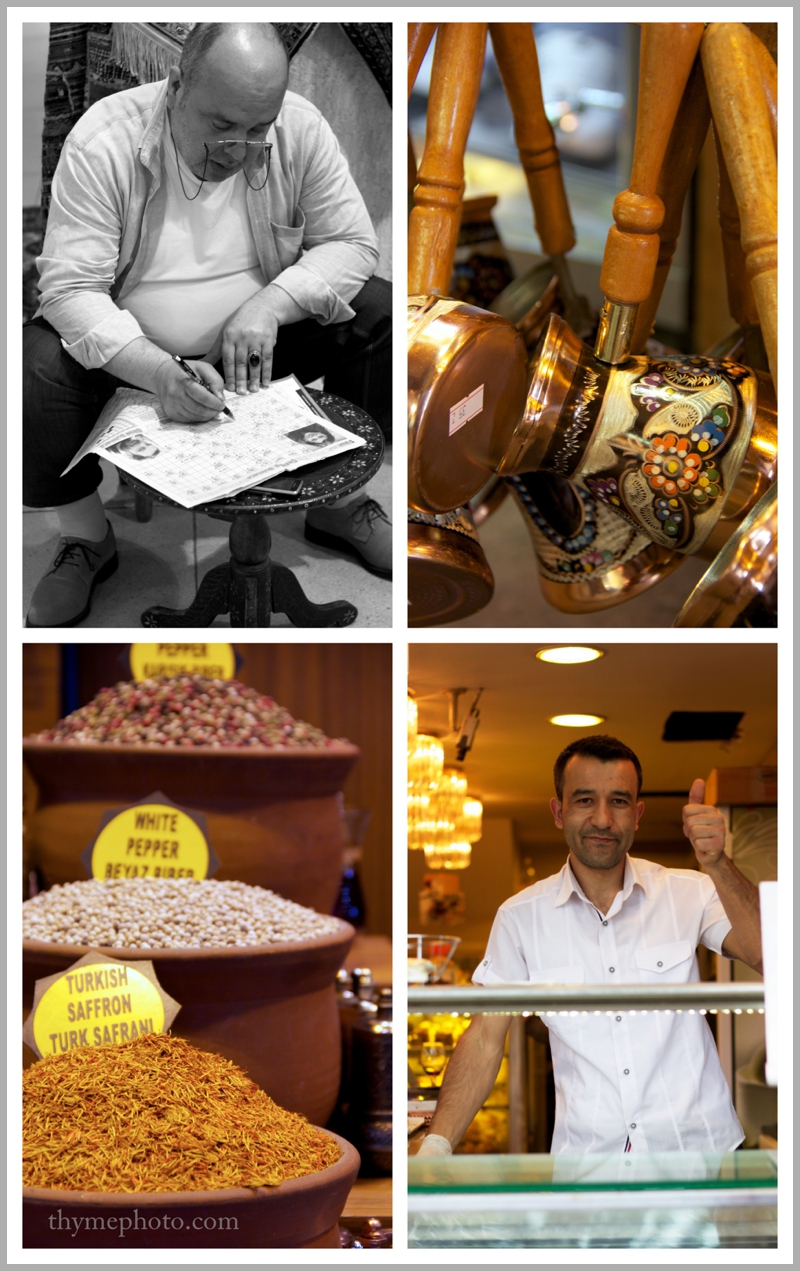 I was surprised to like the Turkish tea so much.  It has an easy, clean, and nice flavor.  I'm not a huge tea drinker but I enjoyed each and every time we sat down and sipped a cup.

Tea in Istanbul is always served in little glass cups on a patterned plate and little white sugar cubes.  Throughout the day, it is sipped fresh and hot. I especially enjoyed spotting a tea caddy and eyeing him while he weaved his way towards his destination. 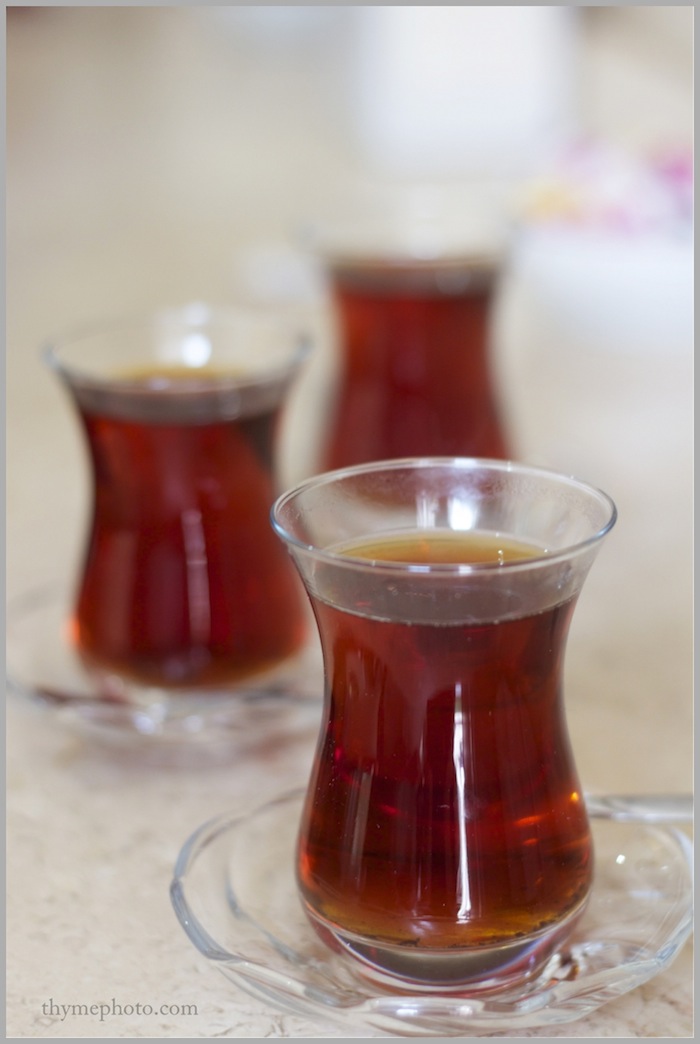 The location of The Grand Bazaar is excellent for hopping right on the tramway.  We decided we might as well continue saturating ourselves with shopping quests and head over to the popular Taksim Square to walk to the well known Istiklal Caddessi (kind of like Broadway or 5th Ave.)


We hopped on the tramway and rode it back to "the old city - Sultanahmet", continued on to the Galata Bridge and crossed to the other side.

The last stop on the tramway is "Kabatas".  We switched from the tramway there and caught the metro train to "Taksim Square". 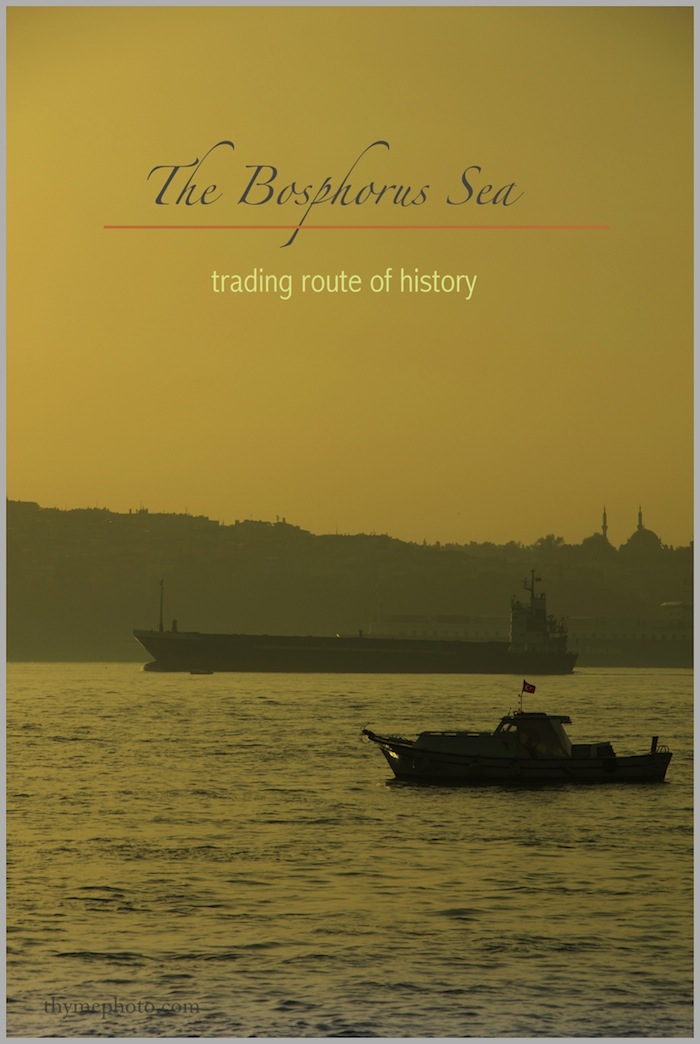 Taking the above ground tramway is not only a nice break off of very tired feet, but a quaint way to get a sweeping view of the city.  Crossing the bridge offers wonderful views of the bustling activity of trade ships, fishing vessels, and ferries in the Bosphorus Sea.

So the hustle and bustle continued for us...although at a different vibe than at the Grand Bazaar.  A frenetic urban pace can be felt in this part of the city.

We walked a little faster, darted in between people moving this way and that.  No longer were we shuffling along in a mass hoard of tourists but we were weaving in and out of the workaday crowd...the locals of Istanbul going about their day. Istiklil Cadessi is the main avenue that runs from Taksim Square southwest to Tunel back in the direction of the Galata Bridge.  It is in a part of Istanbul called the Beyoglu district.

We're not a family of big shoppers (thank goodness!) so we mainly wandered down this grand avenue soaking up the energetic vibes, turning off onto the side streets, coming back again and people-watching as we slowly made our way to the Galata Tower at the end. 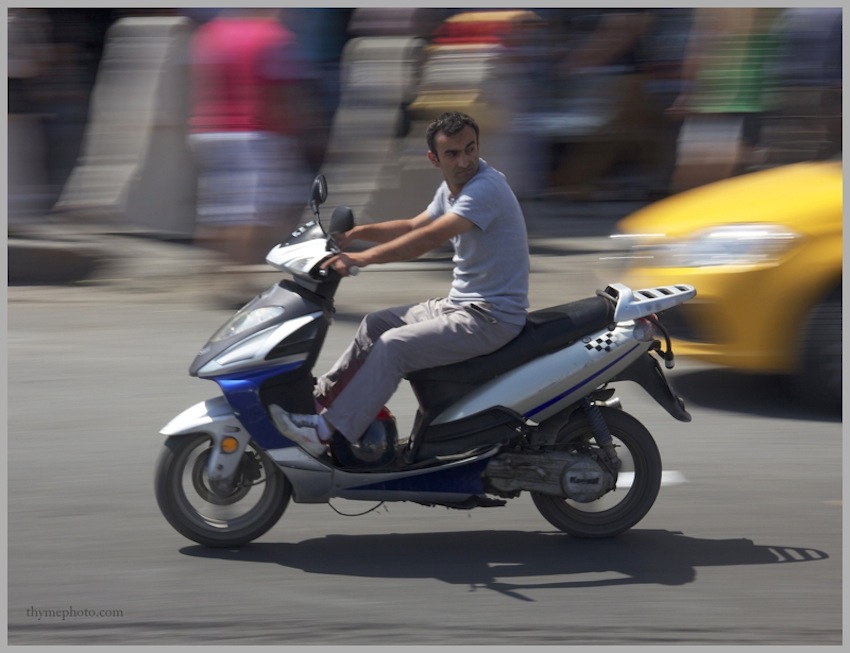 We probably wouldn't recommend doing the Grand Bazaar and Istiklal Cadessi in one day.  This was a bit much for the teen population in our family.  We had walked miles already and finally the sweet shops did their trick and lured us into their doorways for a bit of cooling down and relaxation.

Very conveniently we ran into the much talked about ice cream chain called "Mado".  I could not leave Istanbul without telling my Turkish friend Ilke from "Ilke's Kitchen" blog that we indulged in this turkish treat. 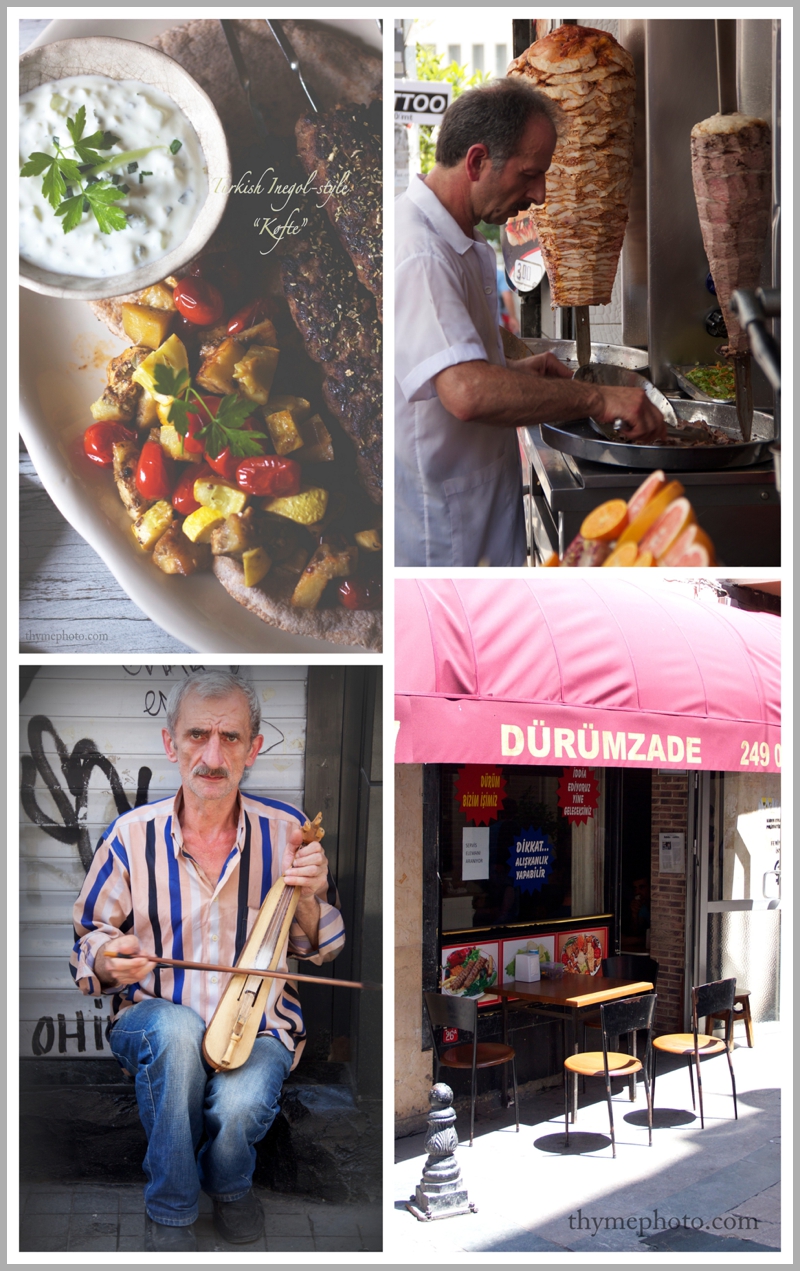 Turkish ice cream is a curious but pleasurable concoction.  Two qualities make Turkish ice cream unique to the kind we are used to in the states. The chewy taffy-like Texture and resistance to melting are special features. One ingredient is a  thickening agent called salep, a flour made from the root of the Early Purple Orchid.  Another unique ingredient is mastic, a resin that imparts a chewiness to the ice cream.

We were very much ready for a cold treat.  I had my favorite combination:  raspberry and coffee. 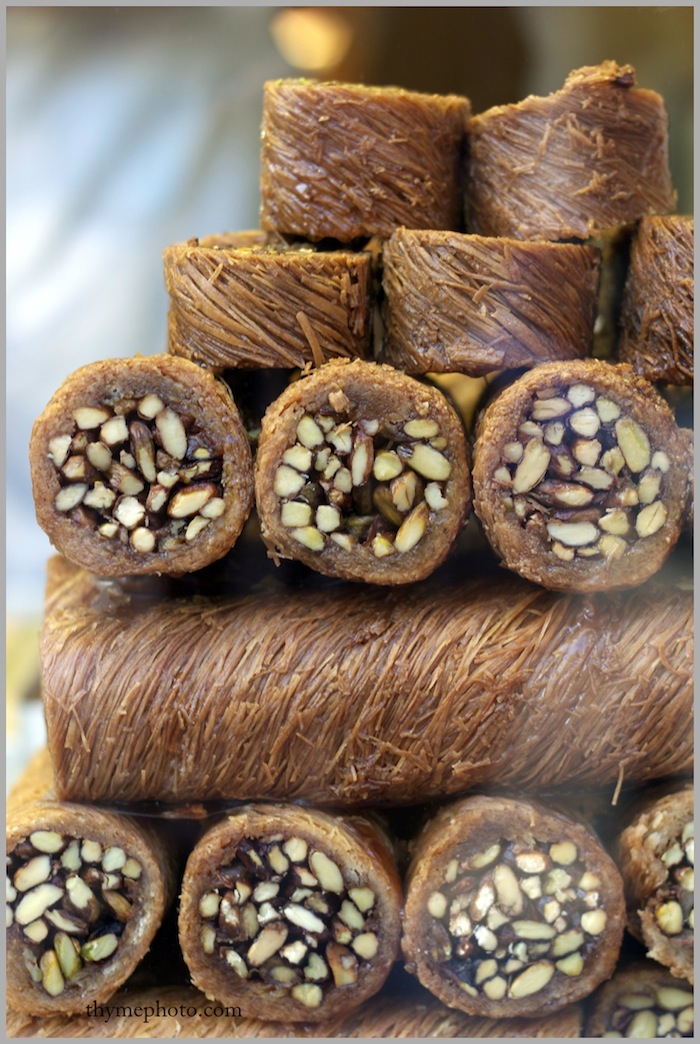 Fully rested, back on our feet, we were ready for the frenetic energy of the streets again.  Street vendors were everywhere.  We couldn't help being singled out as tourists and stop at a gathering of gawkers watching the antics of the ice cream vendors.

The scene plays out over and over throughout the day. A poor unsuspecting (usually) tourist orders a simple ice cream cone from the vendor.  What he gets is a good five minute switcharoo, bait and switch, rib tickling comedy routine.  Finally, after what seems like forever, but isn't, he gets his cone, everyone has a good laugh and the ambling, eating, and shopping continue. 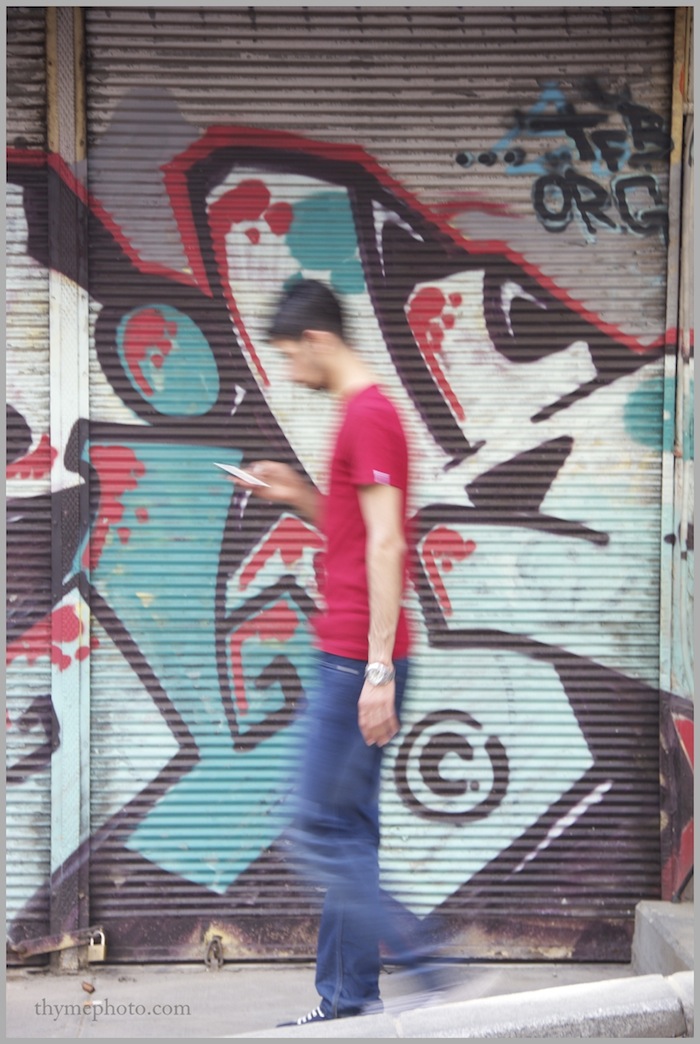 The problem we had on this trip was that we just couldn't possibly eat and sample as many foods as our eyes wanted to order.

We passed "Durumzade" where Anthony Bourdain enjoyed a delicious "doner kebab" on his show.  Unfortunately, none of us could fit in another bite.  We passed sweet shop after sweet shop. We wanted to try a "simit" from the street vendor.  To be in Istanbul requires pacing so that all of these luring street food options can be enjoyed. 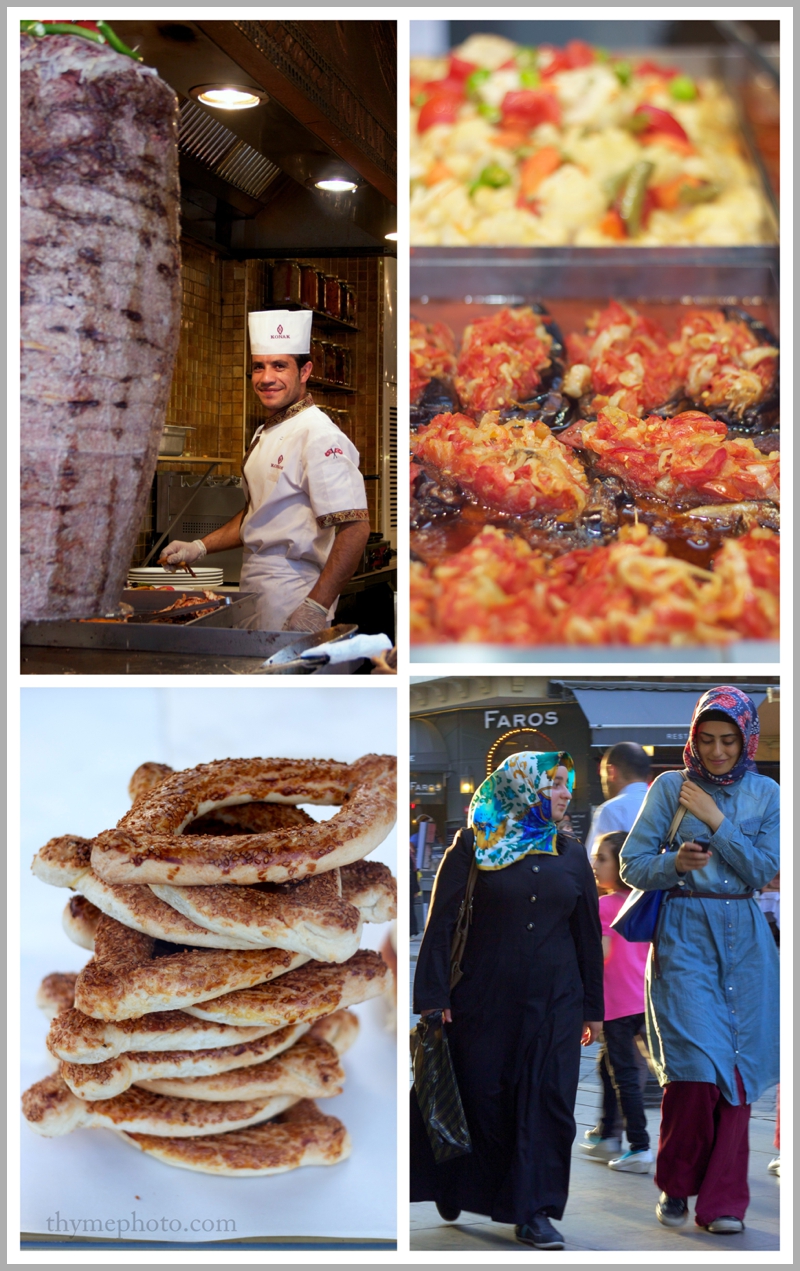 The aromas of the many "doner kebab" restaurants grilling their lamb and chicken on vertical spits  mingle right on to the street because the windows are usually wide open to the foot traffic.

The chefs carve the meat right in front of the passersby and it just all looked and smelled so enticing.  If only we had a second stomach just for vacations. 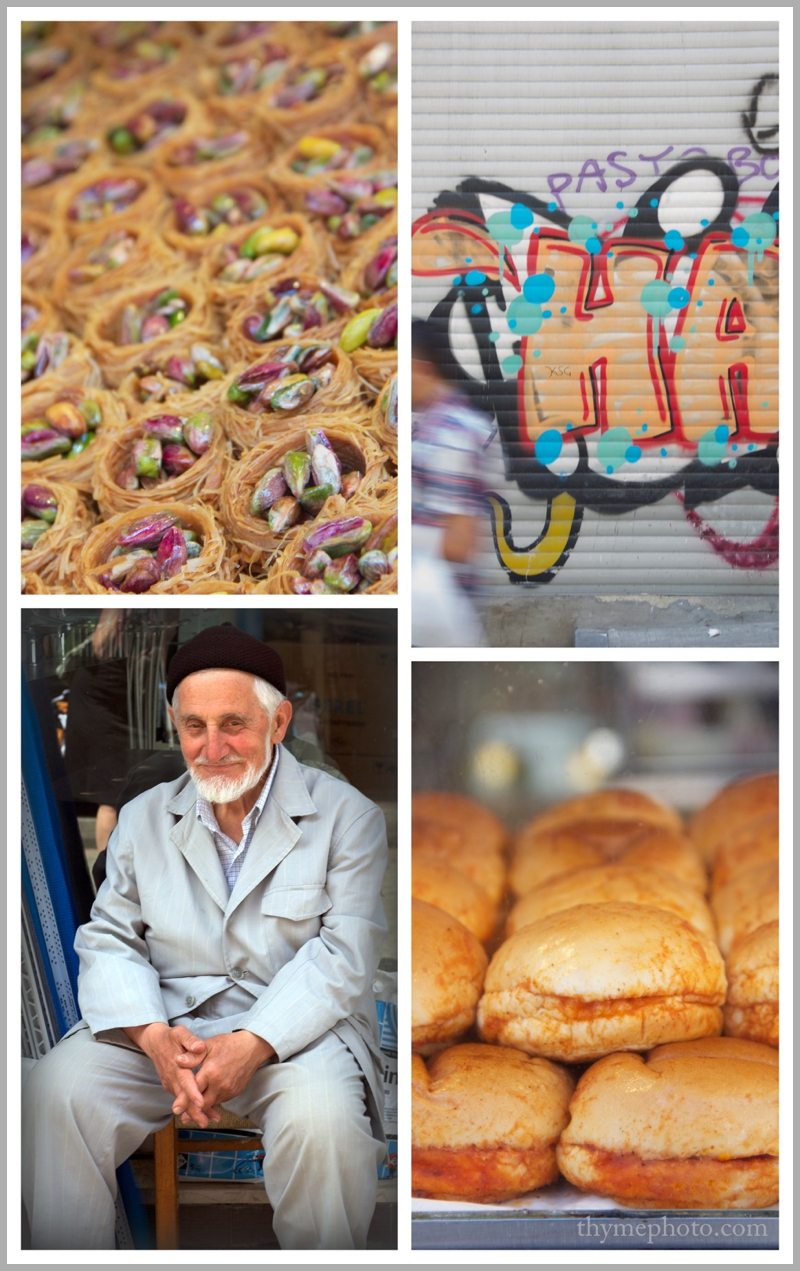 We were finally lured into a Turkish Delight (or lokum) shop called "Koska".  After two days of oogling the many varieties we took the plunge and each picked out our favorite varieties.  Talk about "being a kid in a candy store".  There can be no more pleasurable experience than standing in front of mounds of Turkish Delights and saying, "some of these, a few of those, and why not a handful of that one".

I can see why Peter, from the movie "Narnia" had such a hard time reckoning with the White Witch once he had that tray of these chewy fruity powdered sugar covered candies in front of him.

Pretty little parcels of lokum in hand, we very happily continued on this grand avenue of shops, restaurants, mosques, churches, and parade of street vendors all vying for our attention. 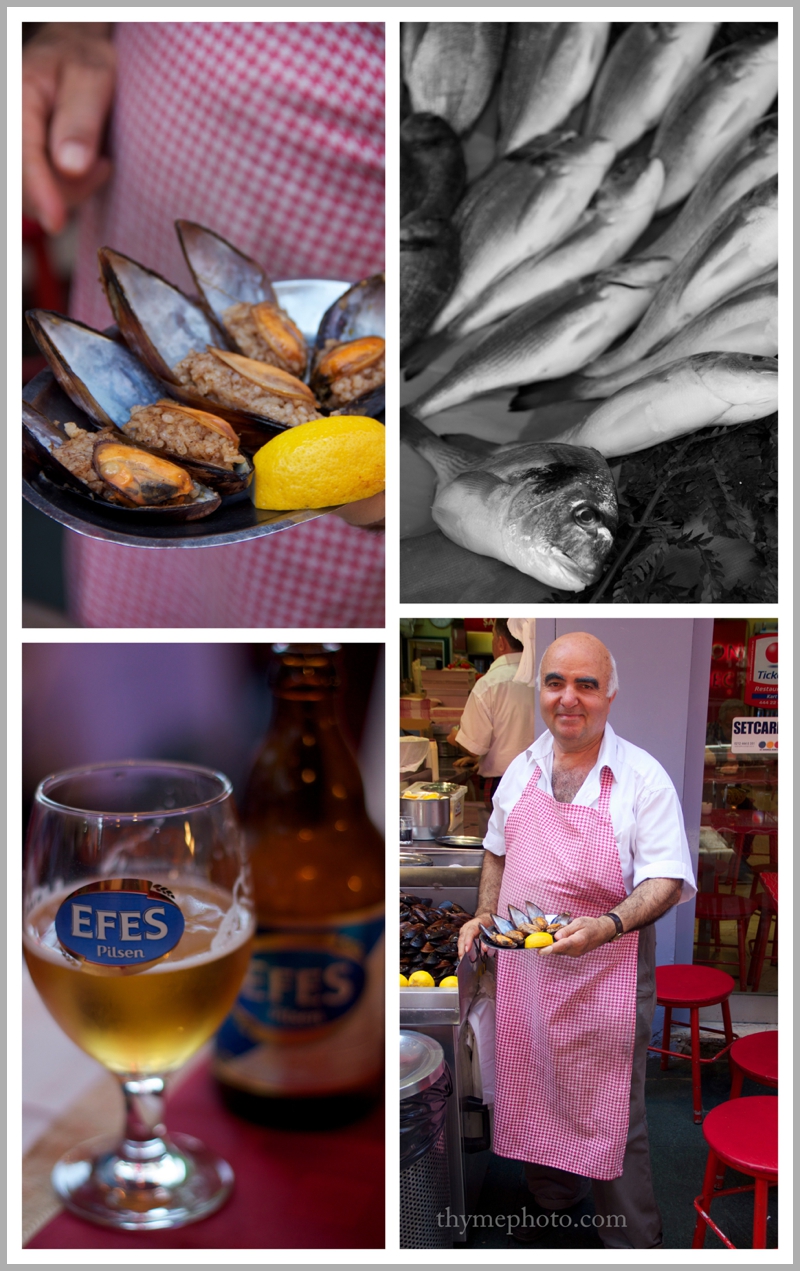 We again veered off of the main avenue and toured the side streets.   Çiçek Pasajı (Flower Passage) is a side street where small, intimate restaurants and taverns are found.   Balık Pazarı (The Fish Market) had many restaurants lined up ready for us to sit down and enjoy a seafood meal. 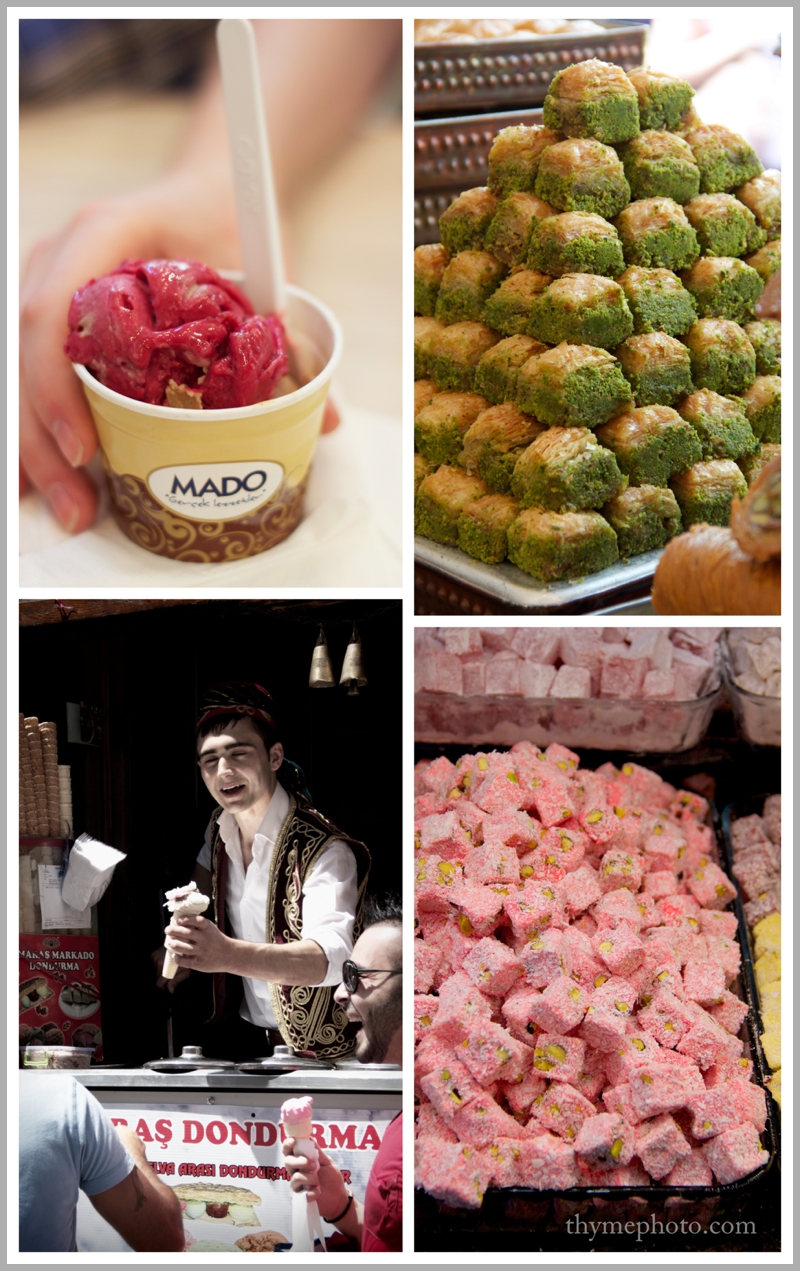 So this long and shop filled day ended our tour of the initial tourist sites of Istanbul.  We were more than ready to head off the tourist route and delve into the more authentic neighborhoods, restaurants, and backstreets of this diverse city.

There is a tramway stop right at the beginning of the Galata bridge.  We were exhausted at this point.  We tumbled off at the "Sultanahmet" stop and shuffled our way back to Megara Palace.

Our hotel offered a  cool relaxing terrace view and we couldn't wait to get back, freshen up, and sit down for some quiet recuperation from the sight filled day. 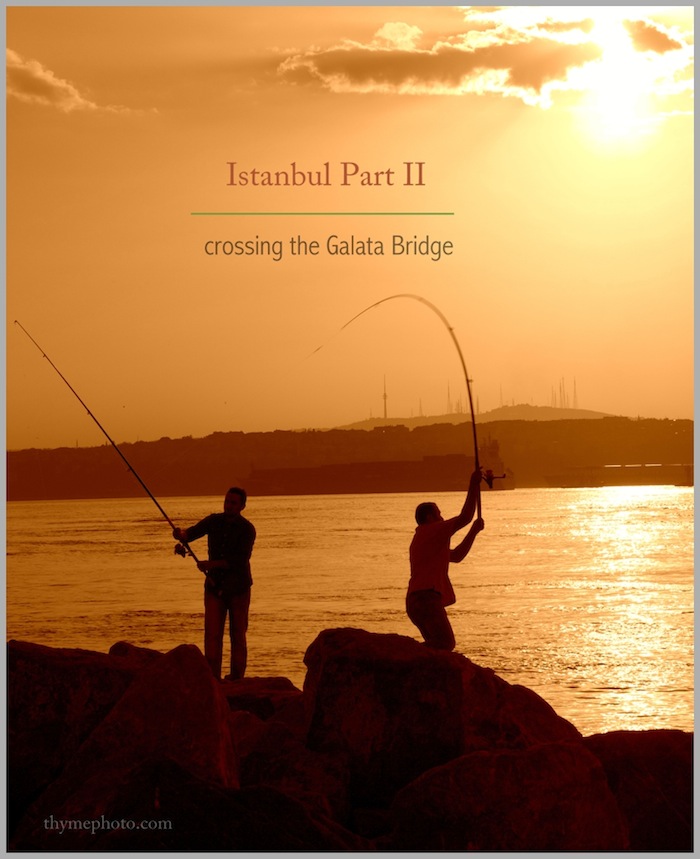 Sultanahmet ended up being a good and safe location to people-watch into the evening.  Many tourists were trolling the restaurant scene looking for a place to eat.  Others were sitting in the park area in between the Blue Mosque and the Hagia Sophia waiting for the two massive but graceful buildings to be lit up for the night.

The kids had no interest in more meandering, so Patrick and I found a cozy place to sit, watch the families stroll by and absorb the grandeur of these two ancient monuments built to honor two time-honored religions of the world - Islam and Christianity.


Helpful Words for getting around: 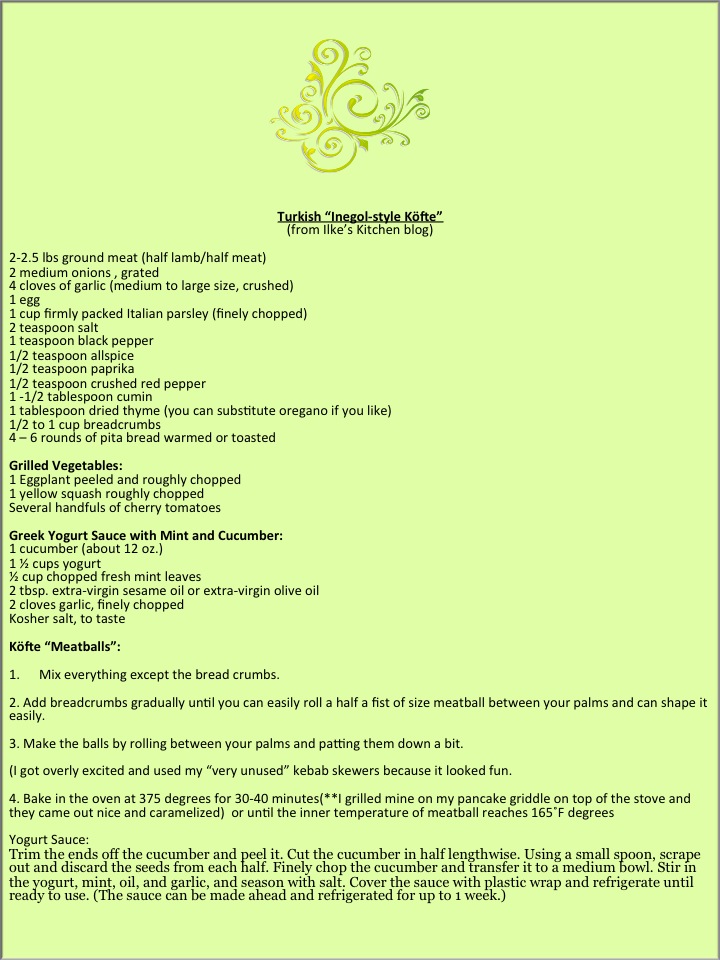