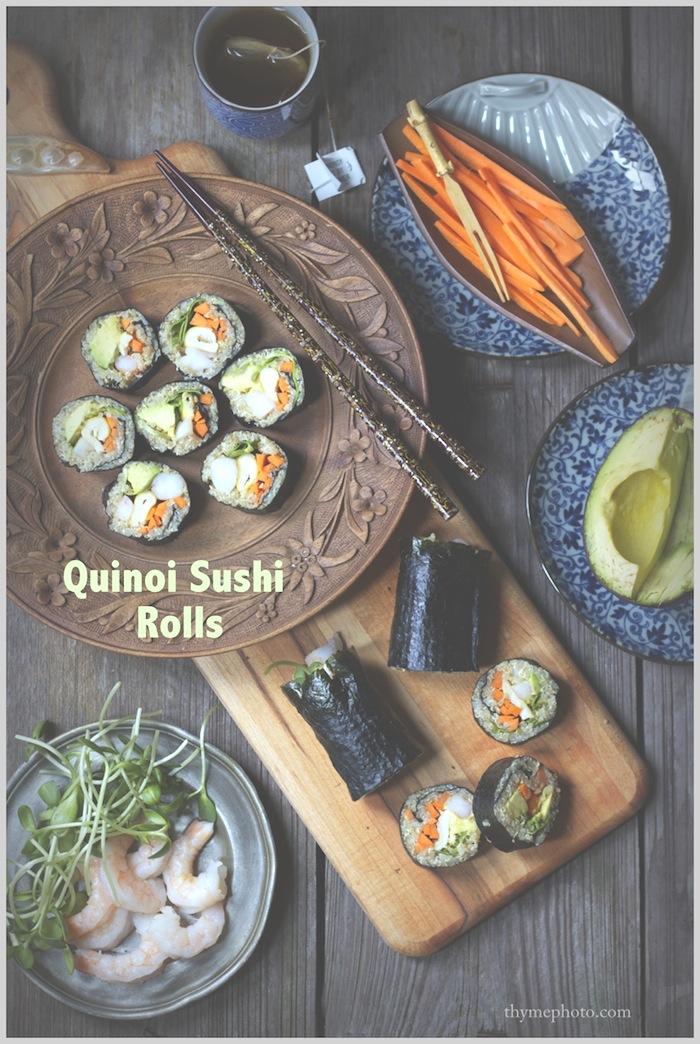 Every couple of months we realize we have to "turn over a new leaf" and rediscover the world of green foods again.  We find we have slipped into a lazy routine of indulging in food culprits like white donuts, white rice, or white potatoes again.  It's easy for us to do...change is hard...change takes more work and focus than what we know to be easy and traditional. 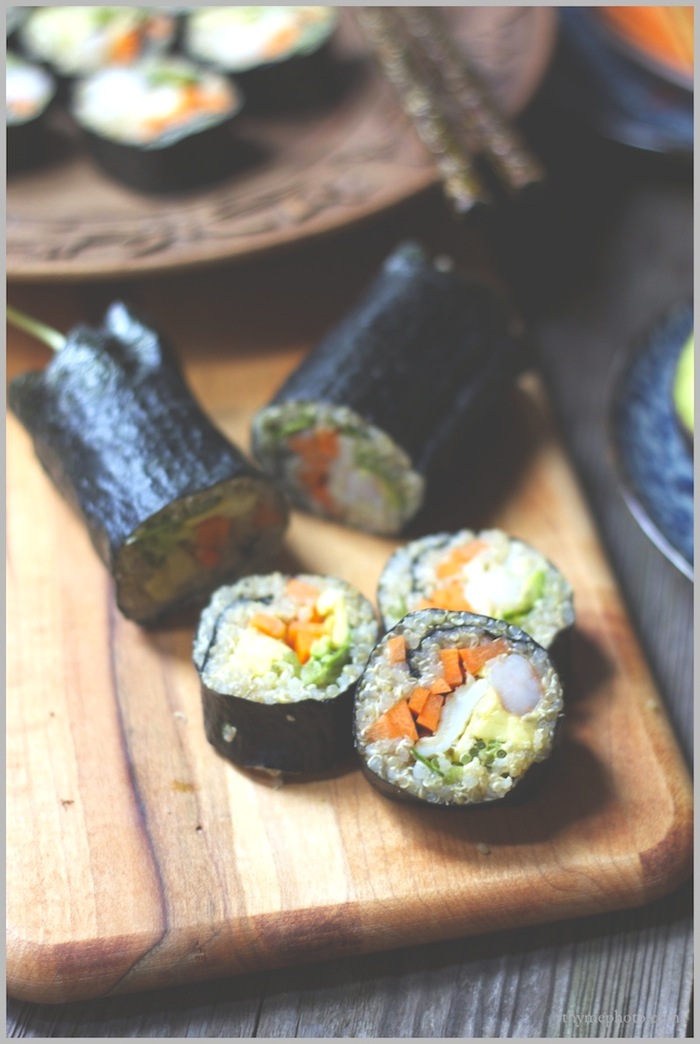 We love sushi in this house.  We have our favorite tiny sushi place that we often frequent.  The family who runs it knows us, knows our kids, and knows just what we are going to order once we sit down.

Riley is always suggesting we make sushi at home.  But we were trying not to cook white rice as often.   There are so many healthy filling options for sushi rolls, but we wondered what we could use to replace the white rice.  We decided to try making sushi rolls with quinoi instead of traditional rice. 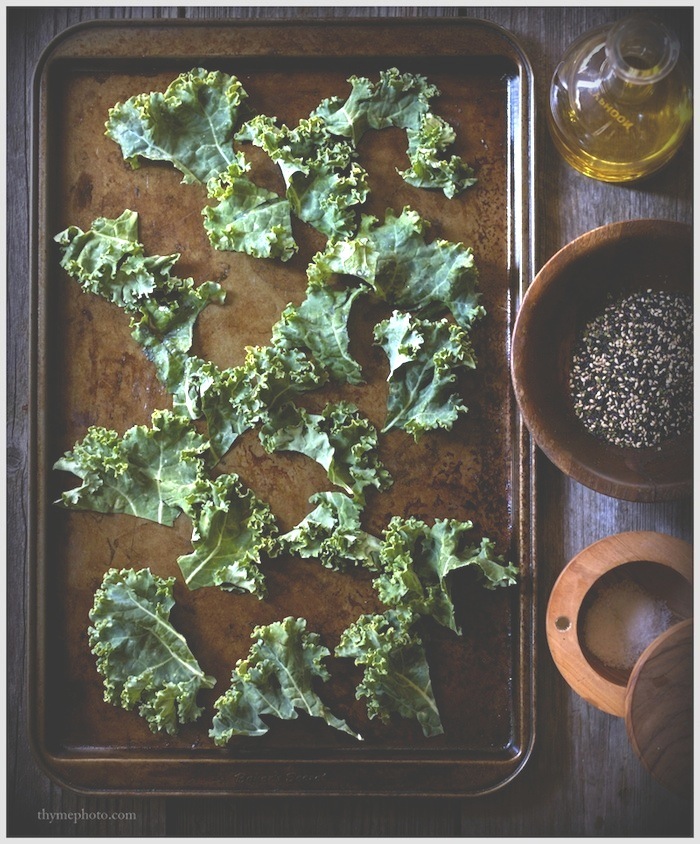 While we were on a roll with our sushi roll experiment "ooooh...pun unintentionally intended", we also decided to play around with making an alternative to potato based chips.  Whereas I am always reaching for sweet snacks, the rest of this family prefers savory crunchy snacks.  We've tried beet chips, carrot chips, and taro chips.  They were all tasty, and good alternatives,  but still pretty starchy.

Kale Chips are an interesting alternative to chips.  We bought a large bunch of kale, broke off sections of the leaves, rolled it in olive oil, sprinkled it with salt, and spread a generous portion of Japanese seasonings all over the leaves to try and give them a burst of flavor. 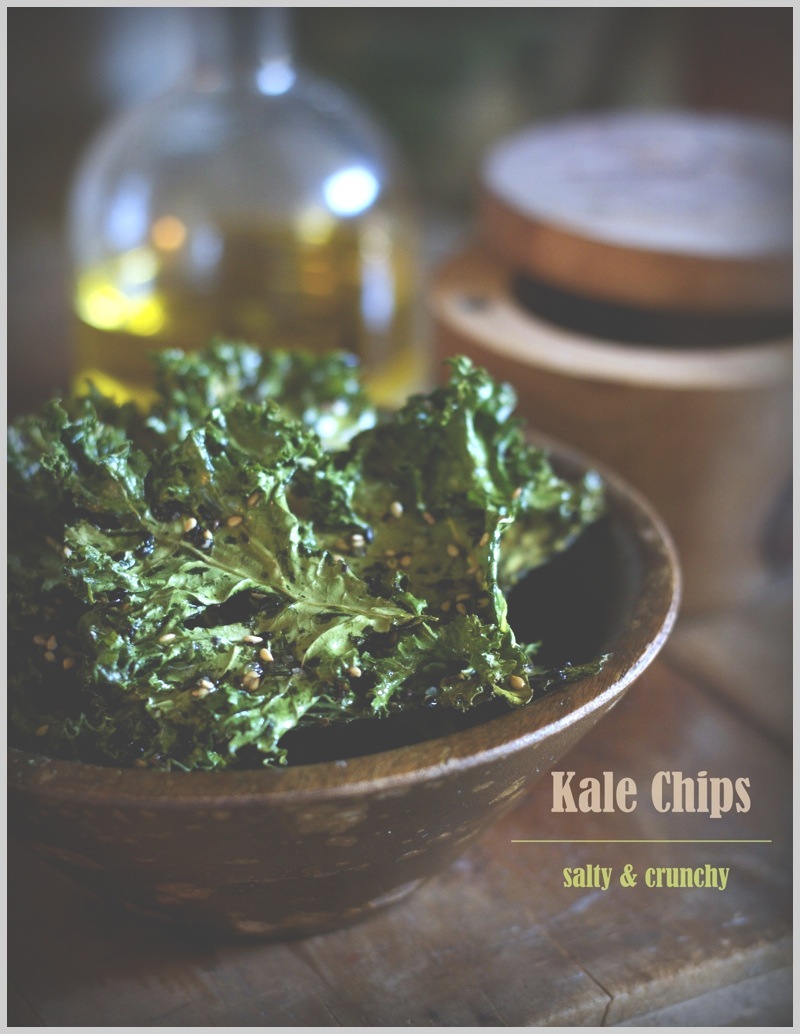 No one was particularly excited about trying them...me included.  I'm not a fan of kale raw so what would these curly green leaves taste like roasted?  We all picked up our first "chip" with lips curled and smirks at the ready.  Surprisingly, however, they have a really good flavor, texture, and aroma.

There is the satisfying crunch of chips, the kick of salt, the little spurt of oil, and the boost of Japanese seasonings for flavor.  Truly, we were all surprised and pretty soon the tray was emptied.

I think it would be fun to roast a colorful medley of kale, carrot, beet, and taro chips for a get together appetizer or for a fun picnic snack.

Between the "quinoa sushi rolls", which make for a great use of leftover carrots, avocado, seafood, and vegetables, and the newly tested "kale chips", I was inspired to experiment with more Asian dishes.

Recently, I had my eyes and ears full of Asian culture, and particularly that of Chinese culture, on a recent tour through Chinatown in San Francisco.  I think I will have a hard time traveling anywhere from now on without booking  either a food walking tour or a historical tour.  I cannot wait to return to San Francisco and continue to explore so many areas both in and out of the city that I missed on our recent trip. 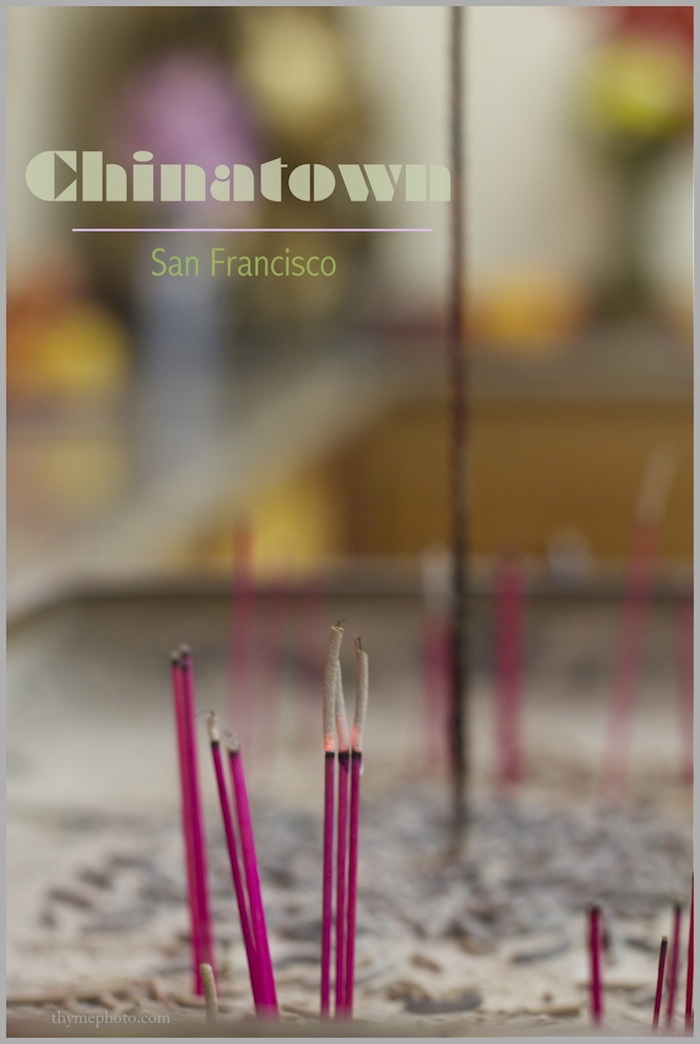 After thoroughly enjoying the Mission District Food tour on our recent trip to San Francisco, I was certainly looking forward to meeting up with Linda, of "All About Chinatown" to be entertained and informed about this lively and colorful area of San Francisco.  Our hotel was only a few blocks down from the bustling heart of Chinatown and I could sense how much the mood and atmosphere changed from one block another. 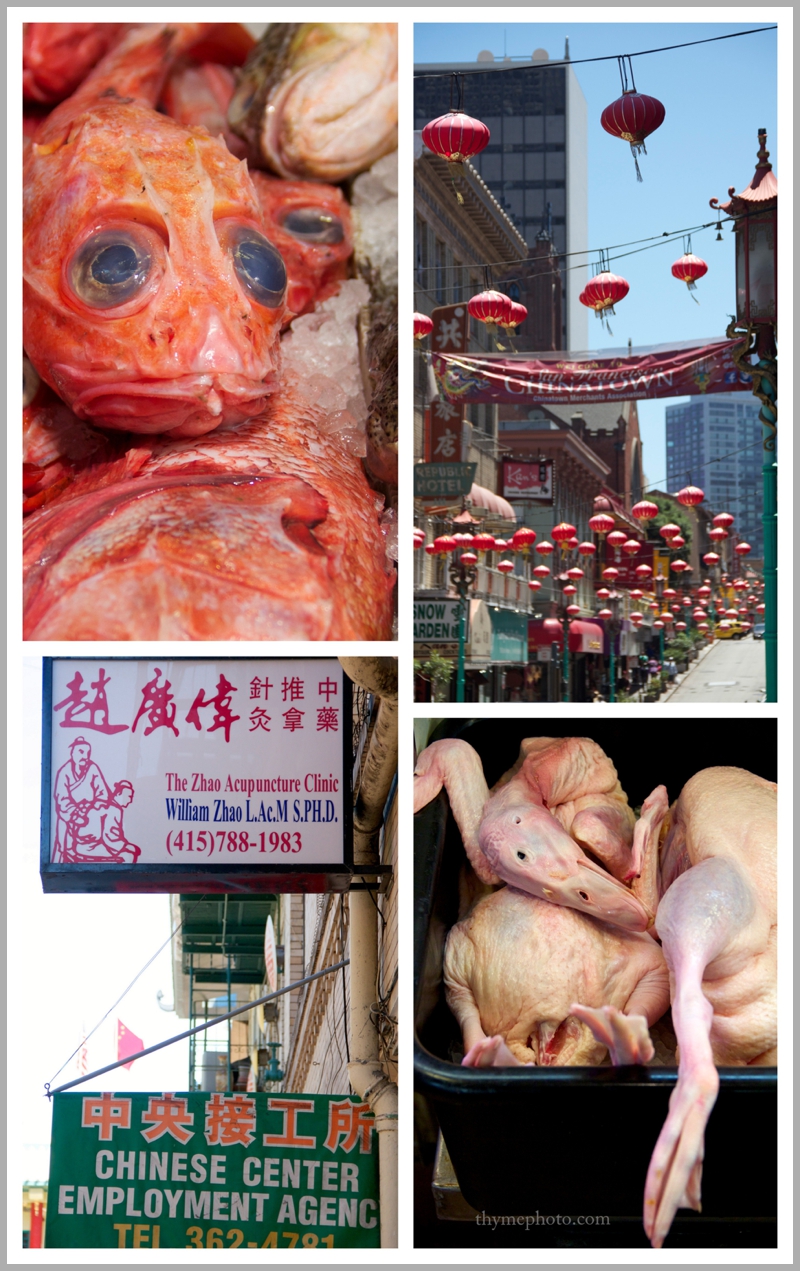 Chinatown is one of the oldest Chinese settlements in the U.S. Linda Lee was a wonderful hostess and, as I hoped, gave us all funny, interesting, and unusual insights into the people and culture of how this area came into being.

While taking in some of the Chinese architectural landmarks, we headed to the line of markets along Stockton Street.  After slipping single file into the narrow and crowded aisle of one of the markets, I tried to take in the variety of vegetables, fish, and prepared foods that are on display from floor to ceiling.

The markets were crowded, bustling, colorful, and filled with smells that were foreign to my everyday world.  For just a moment, I could imagine that I had left the U.S. and was buried deep within a local market on the continent China itself. 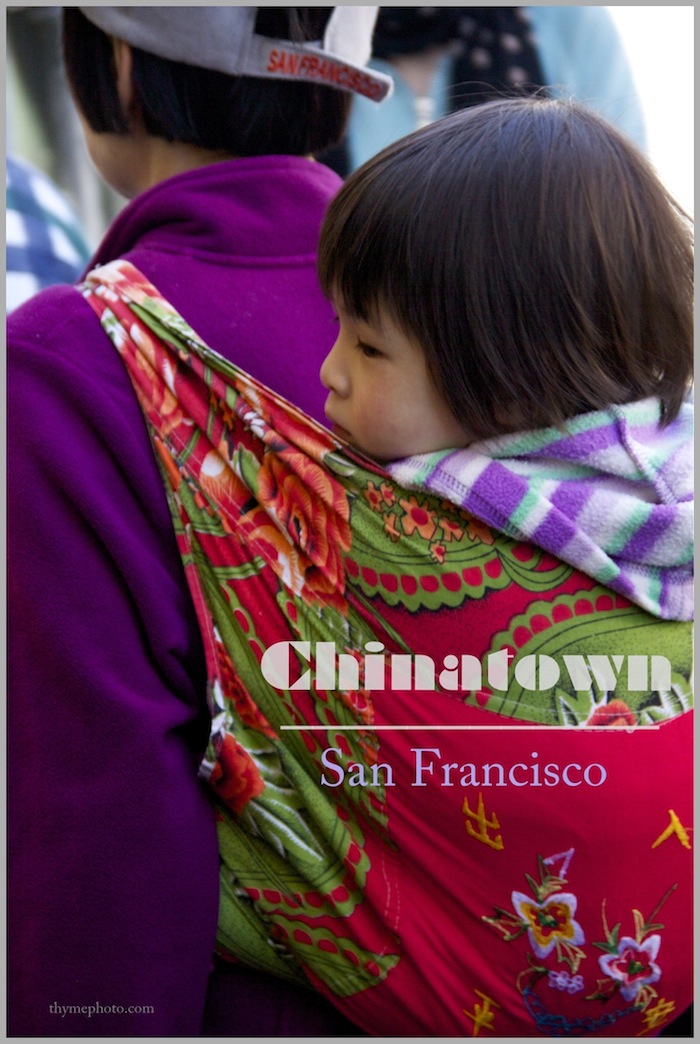 How wonderful that there is an area of the city that works hard to preserve the culture, traditions, and tastes of the Chinese people.  Houston has a huge Chinatown as well but it is great fun to discover the differences between this one and the one here at home.  Linda had us all chuckling as she offered the perspective of Chinatown from the eyes of Chinese children.

Struggling between two diverse worlds, Linda recounted how difficult it was when she was a child to accept and admire her culture because she, like many Chinese children wanted to be more like non-Chinese children.

They preferred to be combing the interiors of suburban malls and buying more western style clothing and food as opposed to attending Chinese language lessons and having tourists ogle at the differences of their section of the city. 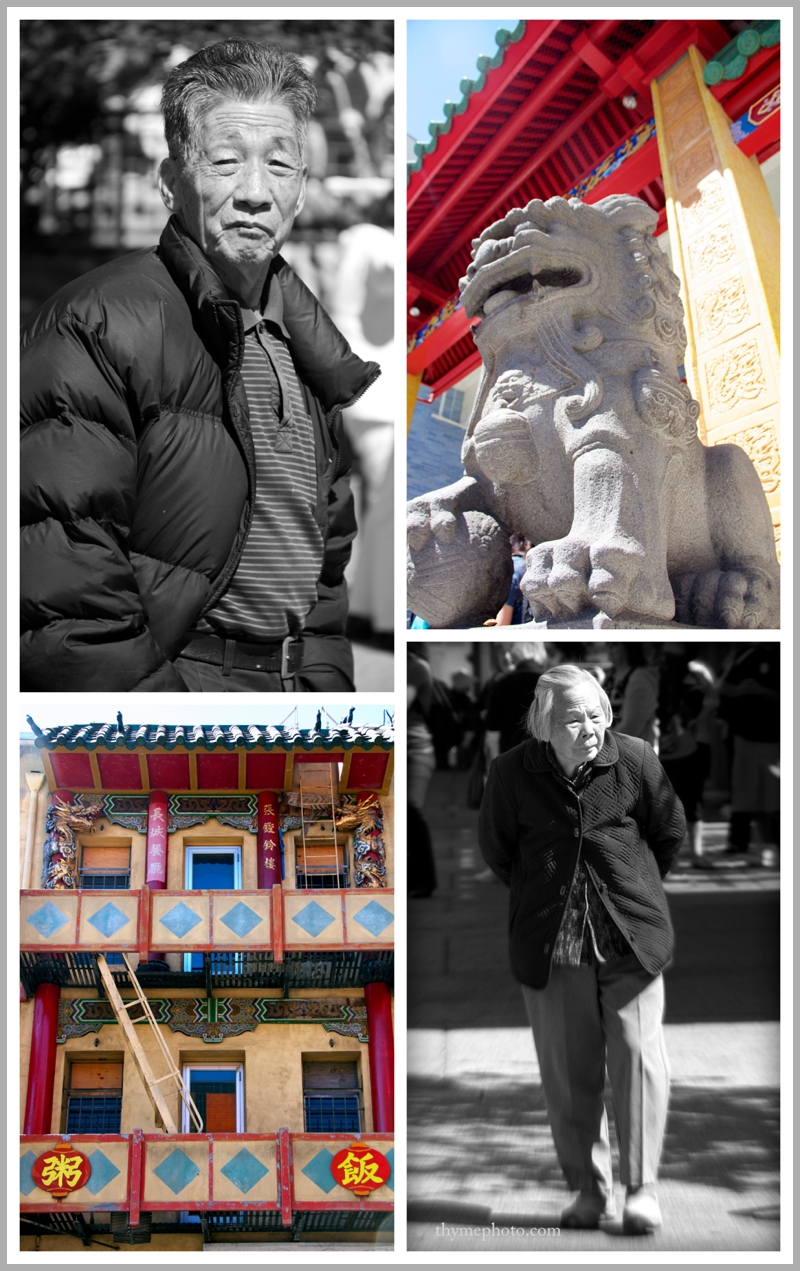 As she grew older she understood and empathized with the hardships and beauty of her culture more and now is thoroughly proud to impart her knowledge of this area to people like me who are fascinated by any and all immigrant stories to the U.S. 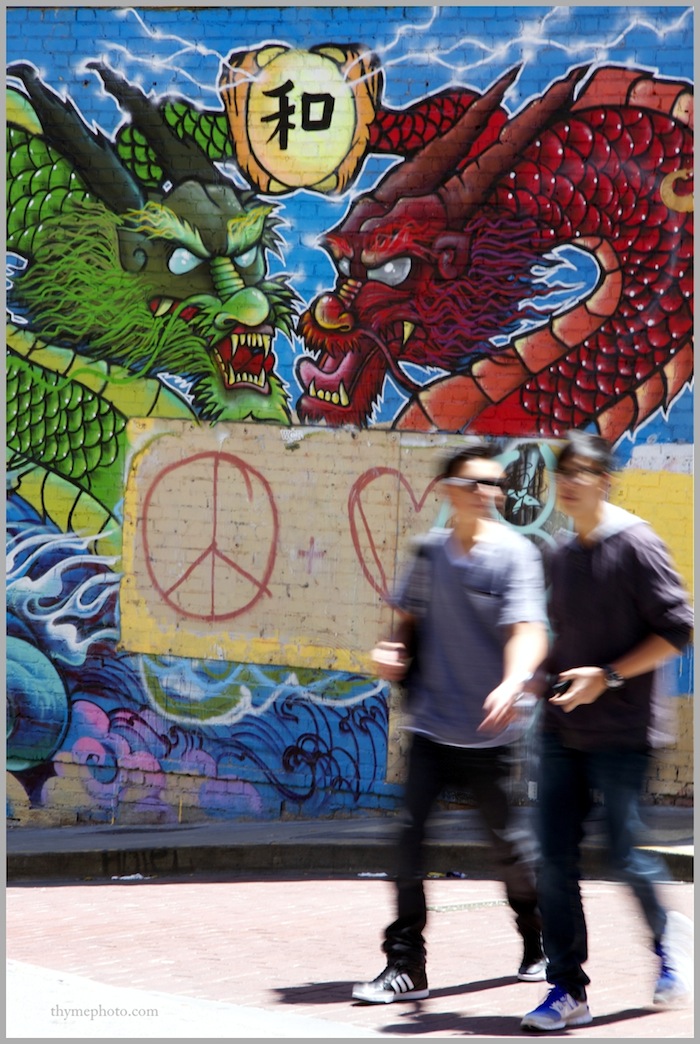 As in the Mission District, there are some fabulous street murals in Chinatown as well.  Dragons are one of the themes and this double-dragon mural, in particular doesn't get passed by without being noticed.

People-watching in Chinatown is fascinating.  It is very clear who are the tourists and who are the locals.  I was glad that our tour took a leisurely pace so that I could not only look at the architecture and shops, but watch the people of Chinatown go about their daily lives. 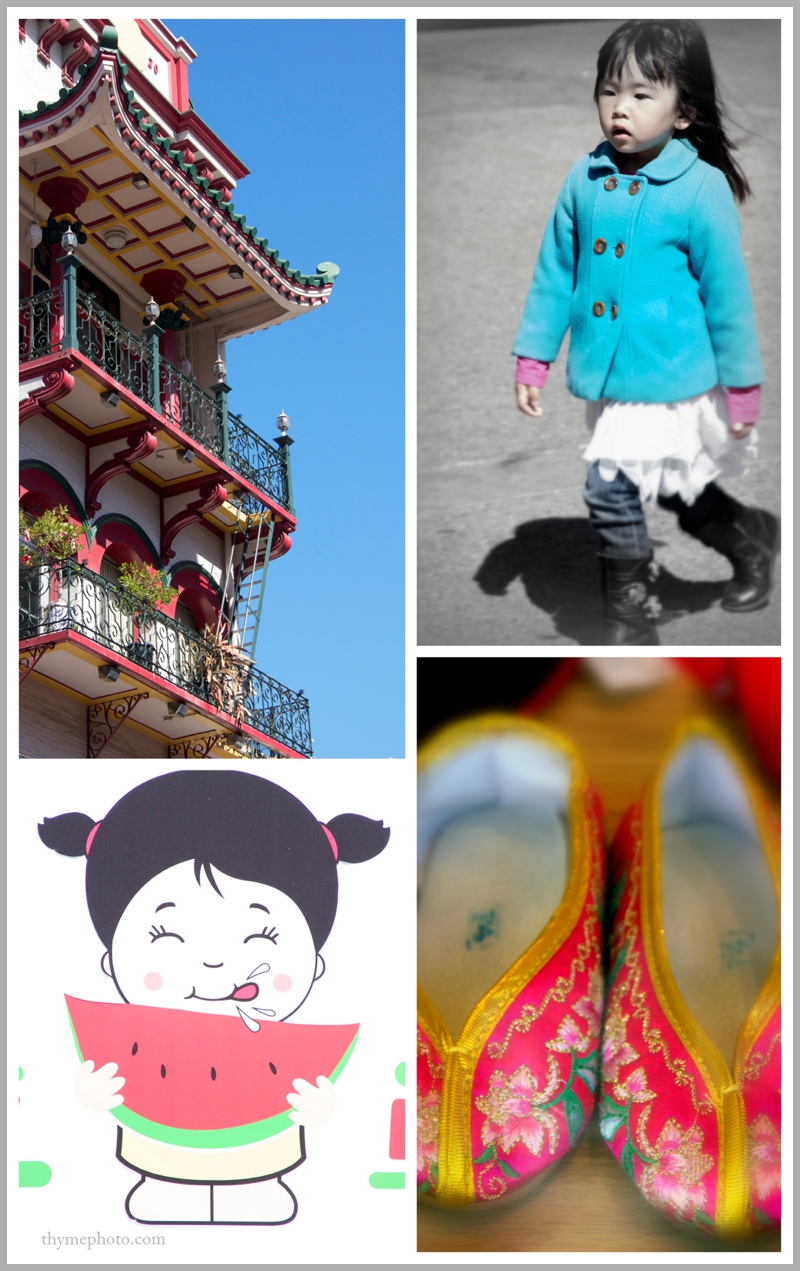 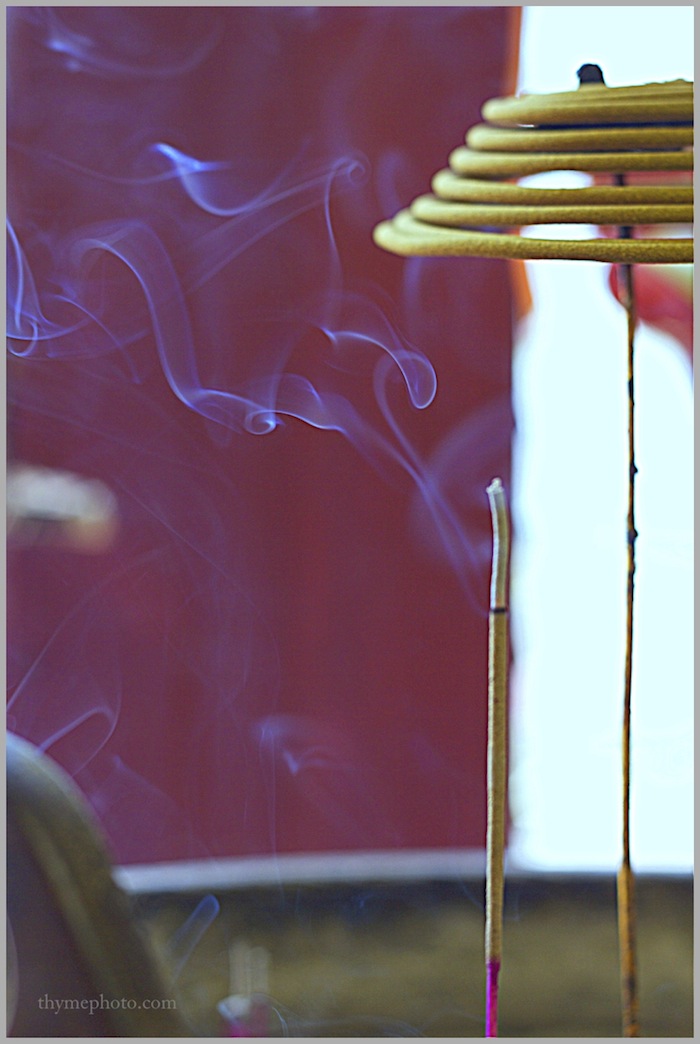 We were led by Linda to an upstairs temple in one of the buildings lined up along the narrow streets.  It wasn't the sort of temple of my "imagination" but rather a large room on the second floor of a building that was being used as a temple.

The aroma of all of the incense burning was strong as tiny little wisps of smoke circled and spiraled up to the ceiling. I like that Chinatown is like a little time capsule, giving insights into the ancient culture and traditions of a population that is integral to the founding of America.

The visit to the temple was a good introduction to Chinese religion.  After having visited some amazing temples in Tokyo while living in Japan, the temple here in Chinatown cannot compare with those, but it was a nice introduction to their ceremonies and practices, especially coming from Linda who grew up in this area. 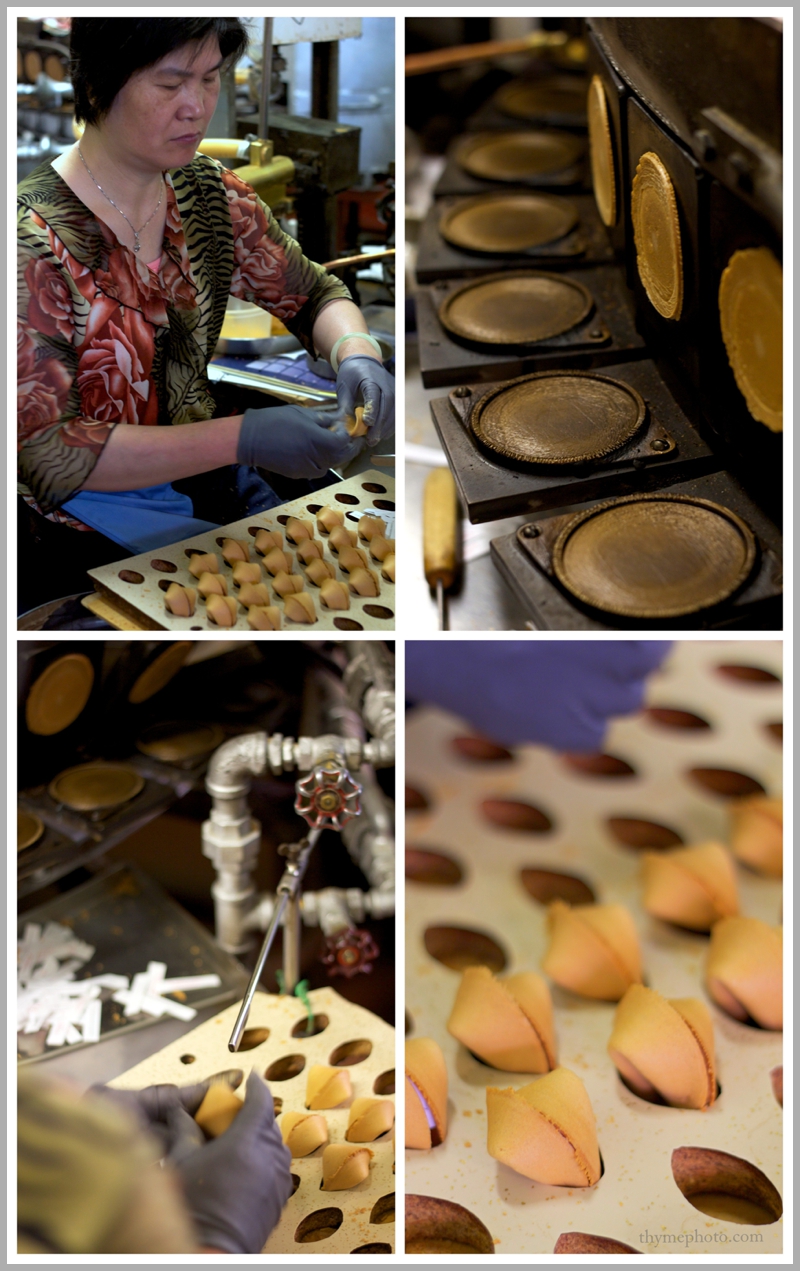 One of my least favorite stops was the little fortune cookie making factory, The Golden Gate Fortune Cookie Factory.  The interior was extremely small and we entered the tiny building, were handed a cookie, and then were steered right back out.

No one smiled, greeted, or seemed remotely happy to see us in their shop.  I worried that they were so overrun by tourists that we just brought nothing but annoyance and disturbance to their daily work.

Feeling sorry for the constant intrusion that they must experience, I saw a can with a sign attached to it, that read "Donate money if you take photos".  I reached into my purse and put a handful of pocket change into the can to show my appreciation for being allowed to snap a few photos.

As I turned to exit the shop, one of the workers, in obvious annoyance, tugged on my sleeve.  He gestured impatiently to the can and said something demanding in tone in Chinese.  I nodded, smiled, and gestured encouragingly to indicate that I put money into the jar.  As I continued to exit, he again said something to me in Chinese that sounded harsh...and it was clear he was not happy.  At this point, one of the women seemed to indicate that I had already donated money in the can.   He backed off from speaking to me but continued to frown at me with displeasure.

I left the shop, feeling disgruntled and disliked.  Perhaps I misunderstood the exchange.  Perhaps I read too much into his tone and actions.  I really don't know what happened, but I do know, I clearly didn't feel welcome. 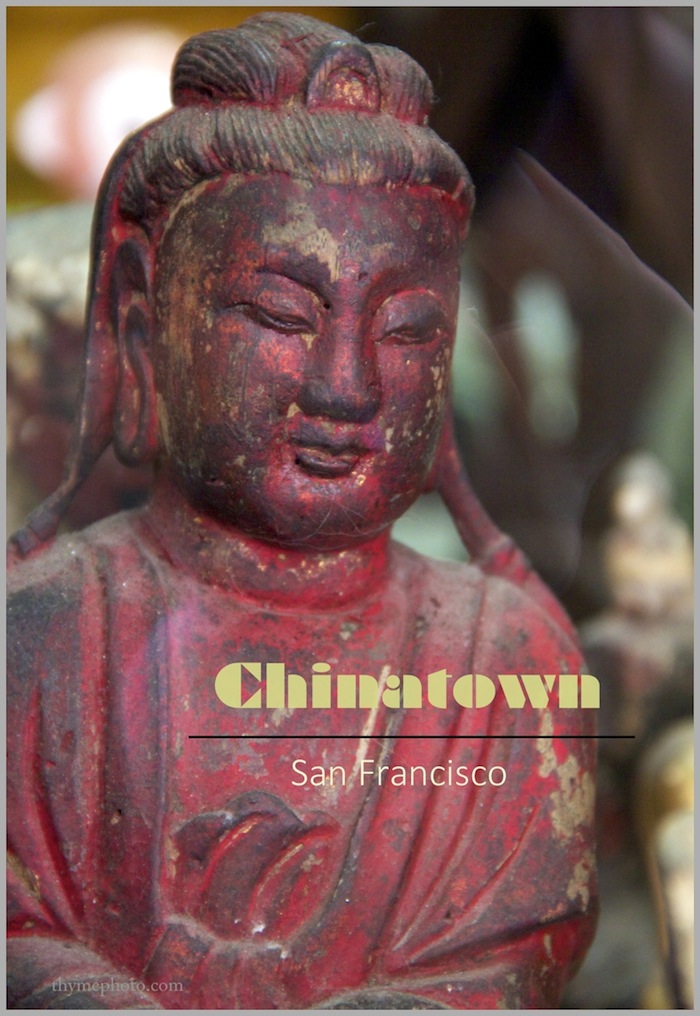 Fortune Cookie factory incident aside, we moved on to some fascinating stops along our 2 hour journey.  I continued to be most interested in the everyday people moving about, laughing, shopping, and working on this normal business day. 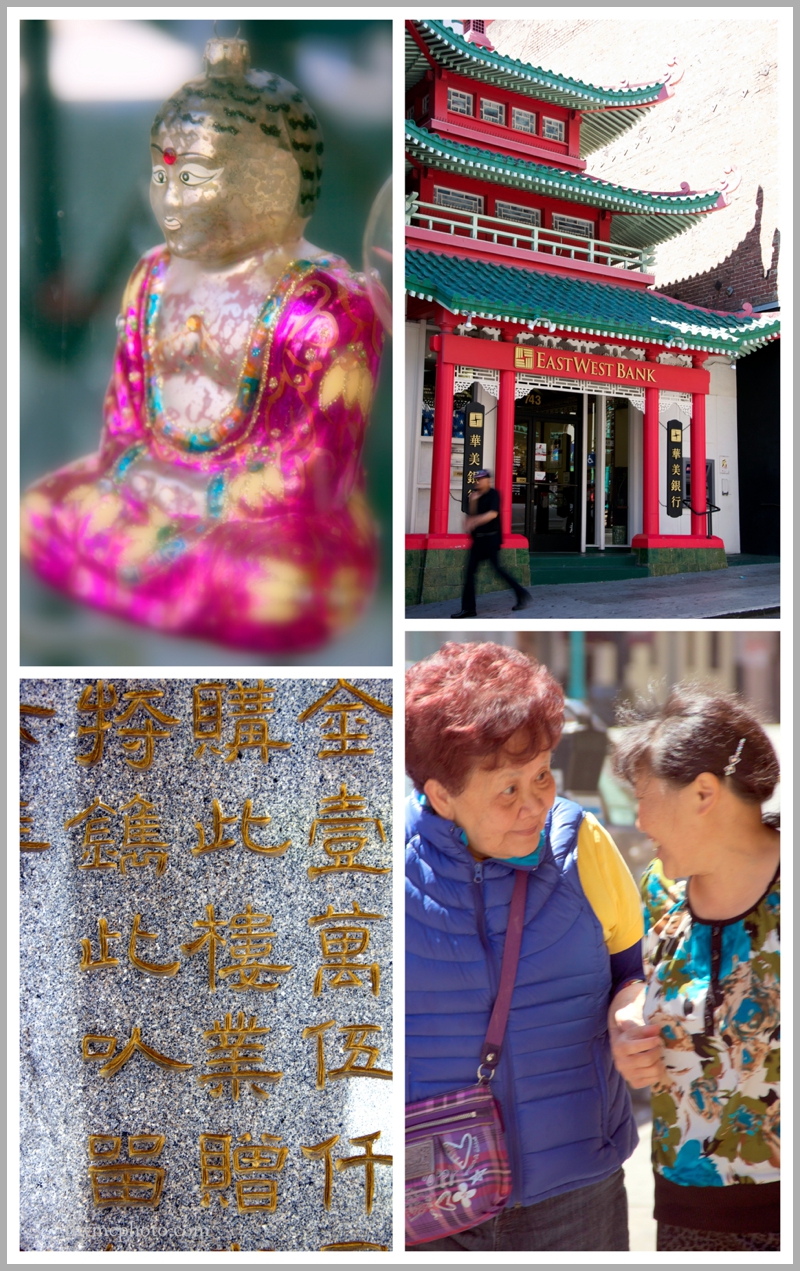 An interesting stop, indeed was at the Ellision Herb Shop.  This is a pharmacy full of all sorts of packages of items that you will certainly not see at a local CVS or Walgreens.

In the area for 33 years, this herb shop is family run and is Chinatown's best stocked herbal pharmacy.  A line of cases sits behind a huge table.  The drawers are brimming with an assortment of  dried bark, roots, cicadas, ginseng, a variety of teas and other staples, over 4,000 offerings in total with most originating from China in dried form.

Practicing herbalists offer advice for a multitude of conditions such as honeysuckle flower to cool the body and help irregularity.  Ginger is recommended for poor circulation or indigestion, chamomile for pain relief, or
licorice root to detoxify the body.


One element of the tour that was unfortunate was the size of our group compared to the tiny size of the shops.  If we all entered a shop and milled about, we would dominate the space and crowd the local shoppers.  So we entered each shop in single file without pausing long and quickly exited the shop.

I was able to get a sweeping view of the shop, a glance at the items for sale, and then out the door we scuttled.  Such is the nature of touring as a group, so I would recommend saving time to return at leisure so these fascinating stops to better absorb the details. 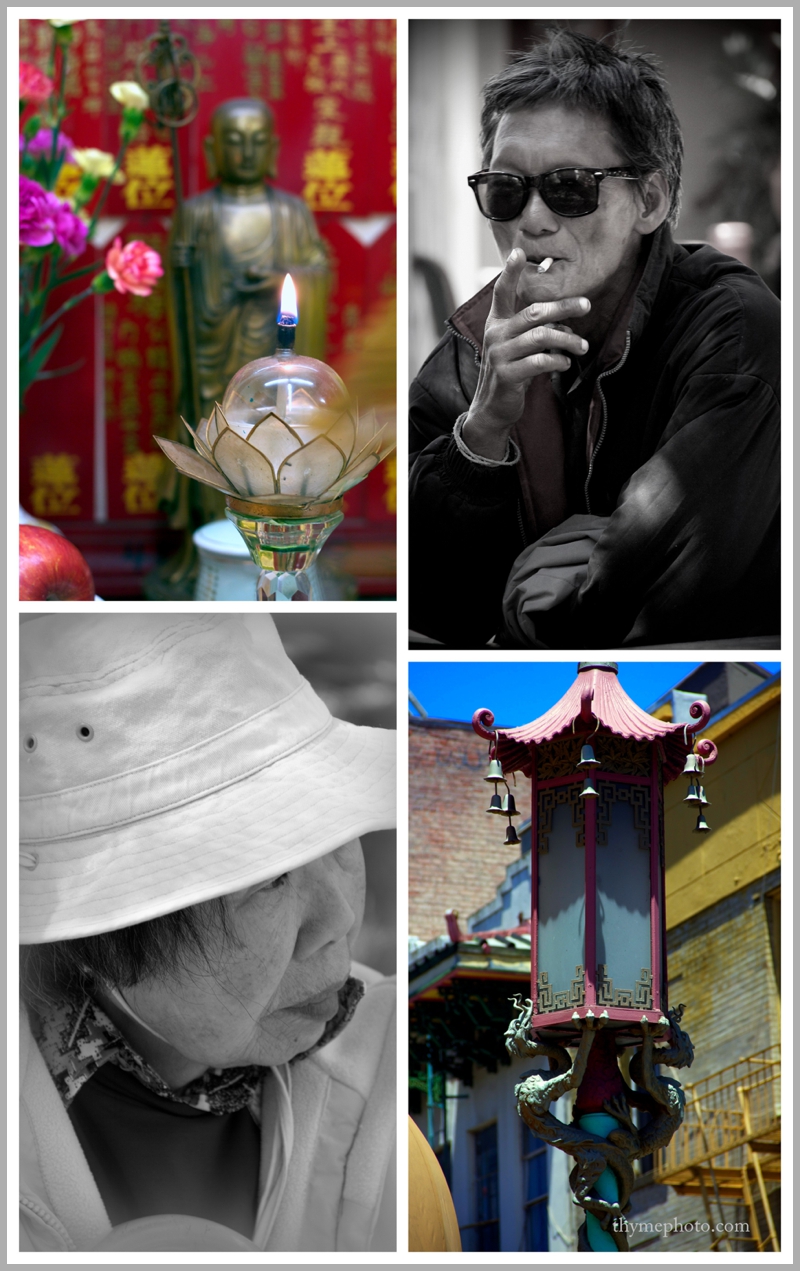 I stayed for several more hours after the tour ended and wandered in and out of shops alone and without constraint of a group.  Thanks to the tour, however, I had knowledge to know where to go and confidence to enter some shops that I might not have had the nerve to enter. 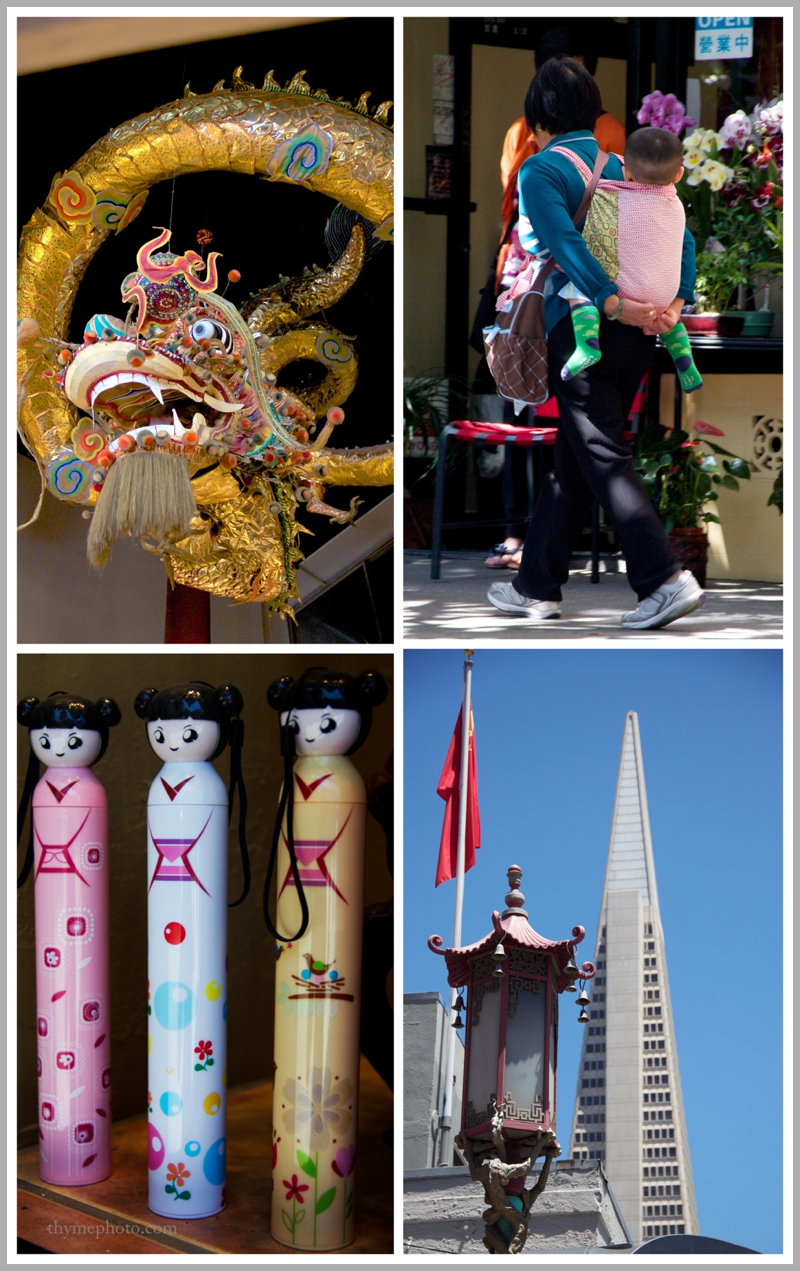 What another wonderful tour for the memory book.  The swing in diversity from the Mission District Tour to Chinatown is what makes the city of San Francisco so fabulous.  The experience of listening to Linda, a woman who grew up in Chinatown, retell the stories of her childhood as well as the stories of how difficult the early days of settlement were for the Chinese people was informative and fascinating.

We keep saying that we would love to go back to Asia and experience more countries there after our experience of living in Japan.  From their food, culture, traditions, and architecture, difference between east and west is one of diversity and extremes.  What better reasons to travel than to experience life so different from our own! 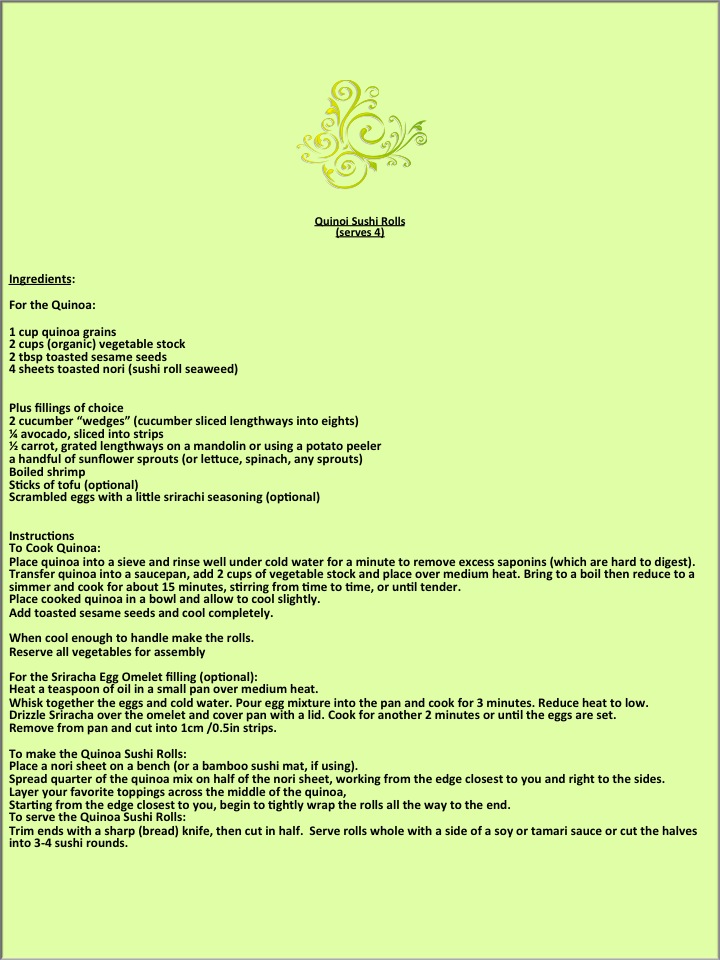 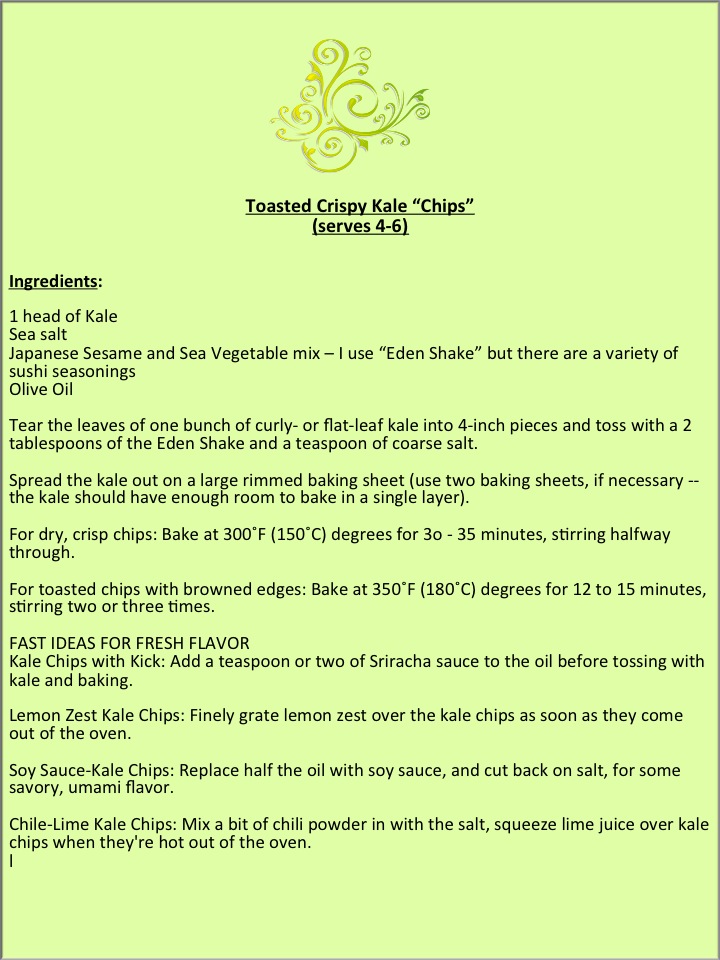