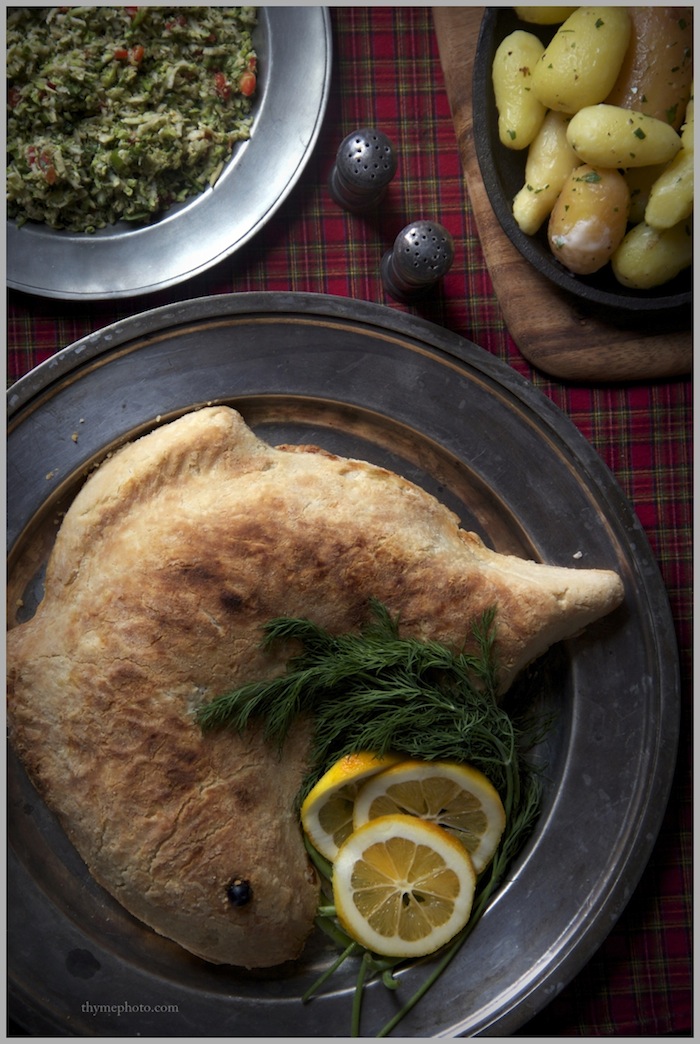 Last month, on Prince Edward Island, Canada, I had the chance to spend several lovely days with a wonderful couple. I wanted to experience a family environment in one of the local communities on the island.  Riley and I relaxed, ate delicious food, and soaked in the charming stories of  Ian and Pam Rowe, owners of  Shady Lane B&B. 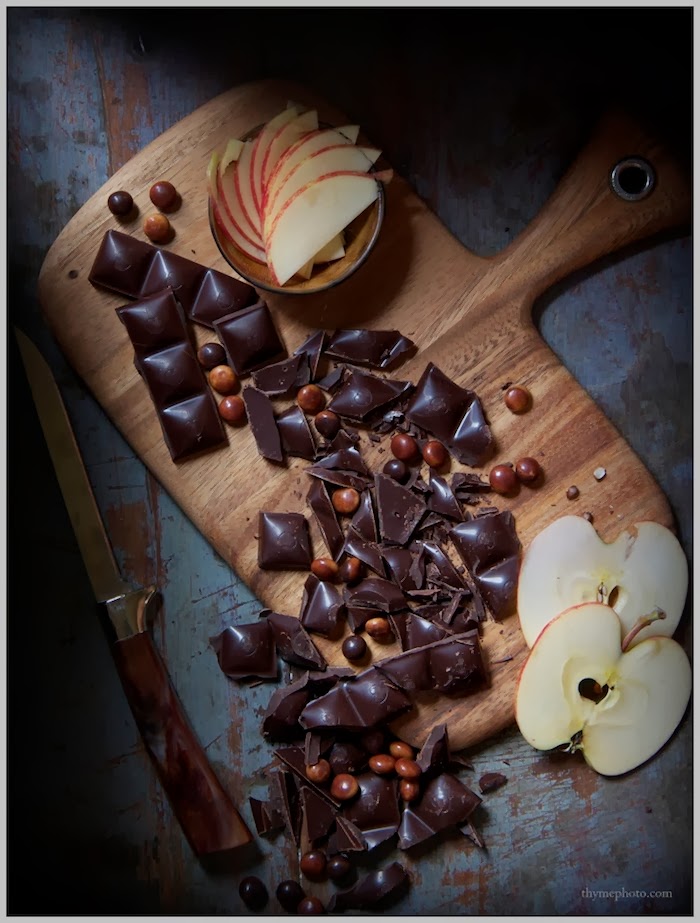 They were such wonderful hosts to us and shared their home graciously. Pam and Ian are easy people to get to know and we quickly fell into fun conversations of travels, food, and their life on the island.  I imagined them coming over to dinner in our home in Houston and what I would prepare to show them thanks for their hospitality.

Thinking about the scenes around the gentle island, the lush scenery of the countryside, and the tiny harbor towns with their bevy of seafood gathering activities I had fun dreaming up a menu for Pam and Ian that reflected their landscape.

I selected this hearty salmon recipe for their main course. The island is known for their potatoes so I prepared some fingerling potatoes and rolled them gently in butter, salt, and parsley.  For dessert, I thought I would spoil them with a rich, dark, silky Pots de Crème as a pleasing and indulgent dessert treat. 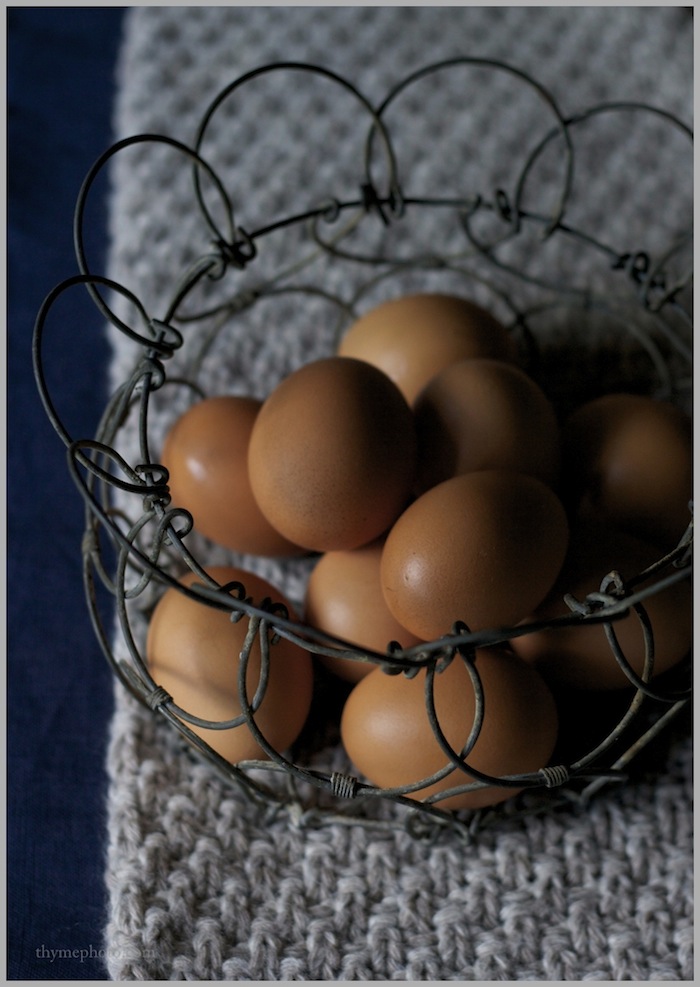 Ian and Pam's home is so cozy.  It is nestled at the end of a windy little lane, just off the beaten path, a short drive from  St. Peter's Bay on the northern shore of the island.

This Salmon en Croûte is a favorite in our home.  The herb butter spread and the whole grain mustard wrapped in a pastry shell all come together to make a robust and distinct presentation.

I served this salmon pie this weekend while thinking of our remaining days on the island way up in Northern Canada.  I served it with a chilled bottle of white wine from Spain called  Martin Codax.  This white wine is made from the Albariño grape that thrives in the rain and mists of NW Spain. The Albariño grape is known as "the wine of the sea" because of the vineyard's proximity to the ocean and its celebrated pairing with seafood. 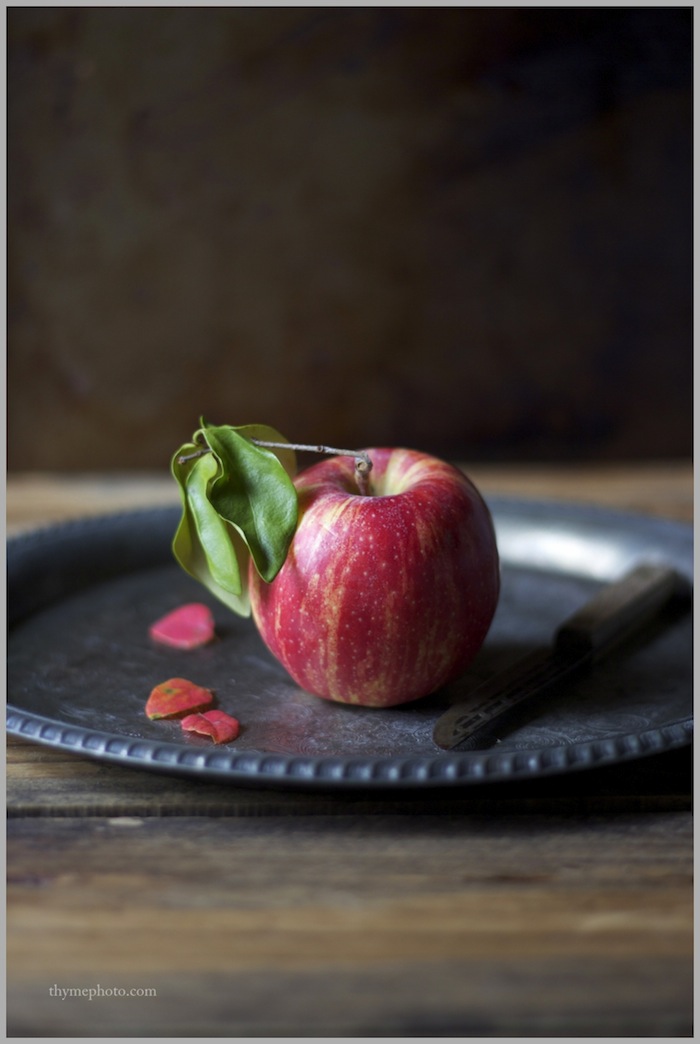 It is within a layer of the salmon deep with the pastry pie where the flavors begin.  An inner layer of whole grain mustard and dill/basil herb butter infuse the fish with flavor.  The salmon is tucked in like puzzle pieces, pressed gently into my fish mold, enclosed in pastry, and then baked in the oven. 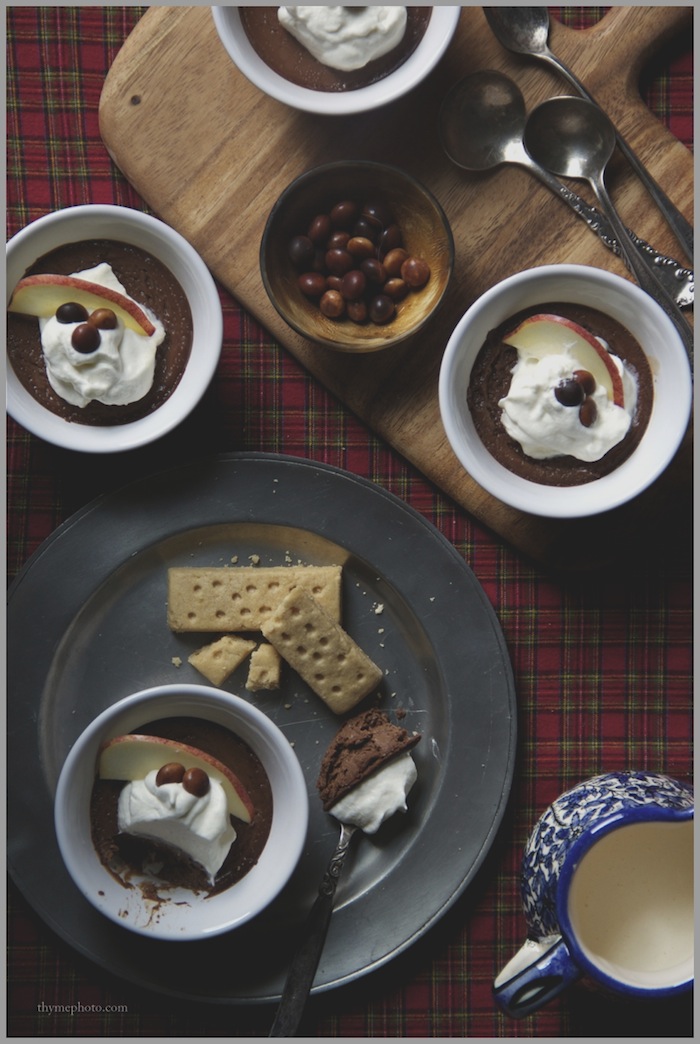 Mmmmm...my mouth waters just remembering this delicious meal.  The whole grain mustard and the dill butter flavor the salmon so well while the pastry crust keeps the fish so moist inside.  Fortunately, there was plenty enough for leftovers today. 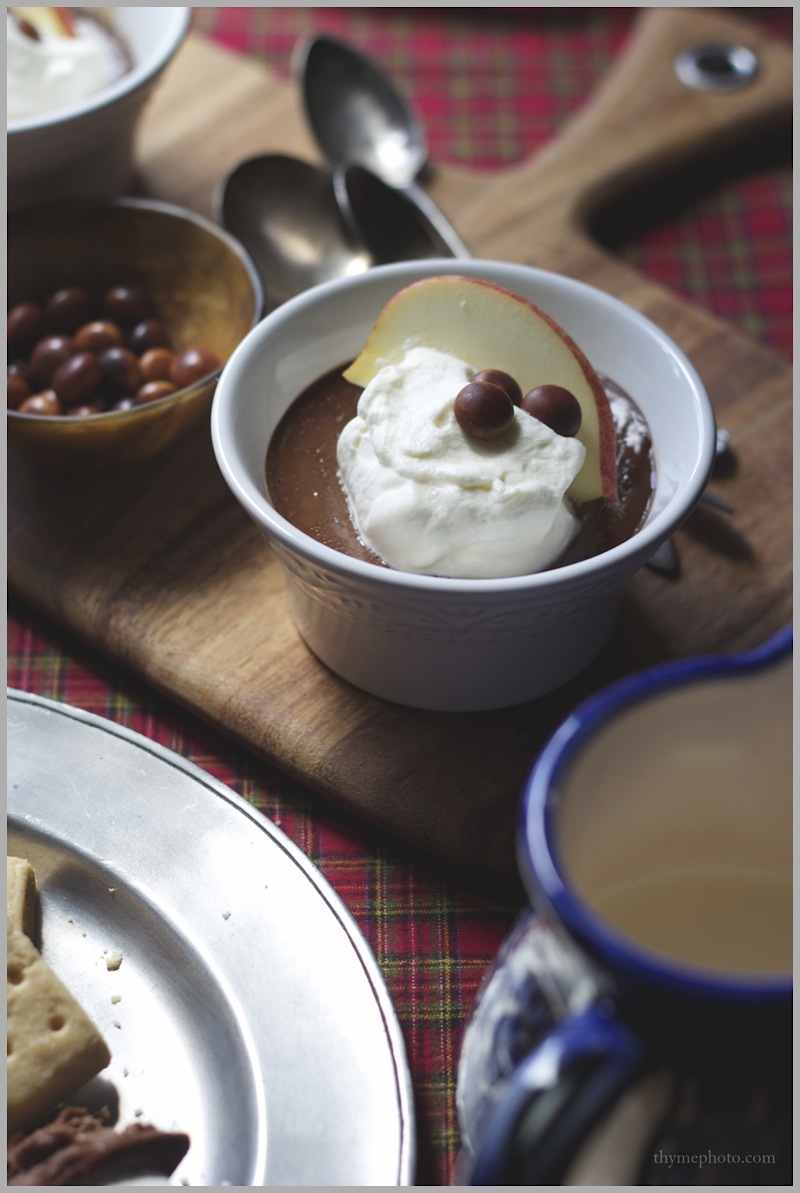 Since Ian is originally from England, I thought he might enjoy a pastry pie sort of dish.  I thought I would fill it with seafood, instead of game meat, since the island is so famous for such a wide variety of fish and shellfish.

For the Pots de Crème, I used one of my favorite chocolates.  I  enjoy the Colorado based brand Chocolove xoxo.  They source their chocolate from Belgium and believe that the crisp cool dry mountain air in Colorado is a secret ingredient to making their chocolate delicious.  I picked out their dark chocolate (55% cocoa) with natural peppermint oil. 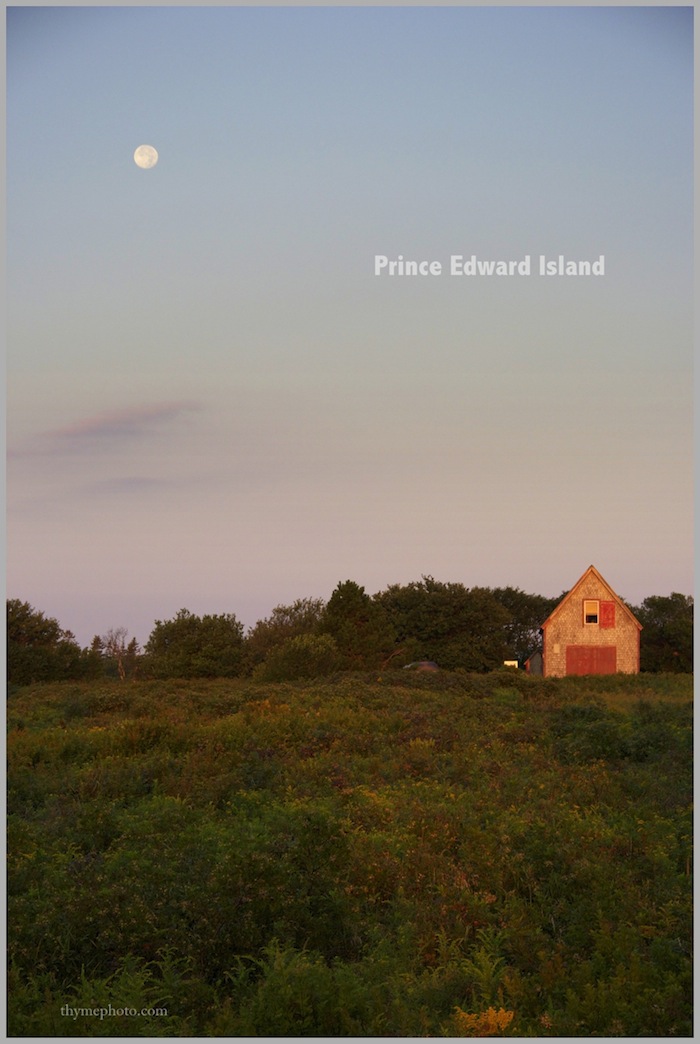 Ian and Pam are a delightful couple.  They put such care and attention into the details of each delicious breakfast they served during our stay at their home.  What a treat it would be to return the favor and indulge them in a Salmon en Croûte finishing off with the rich taste of Chocolate Pots de Crème. 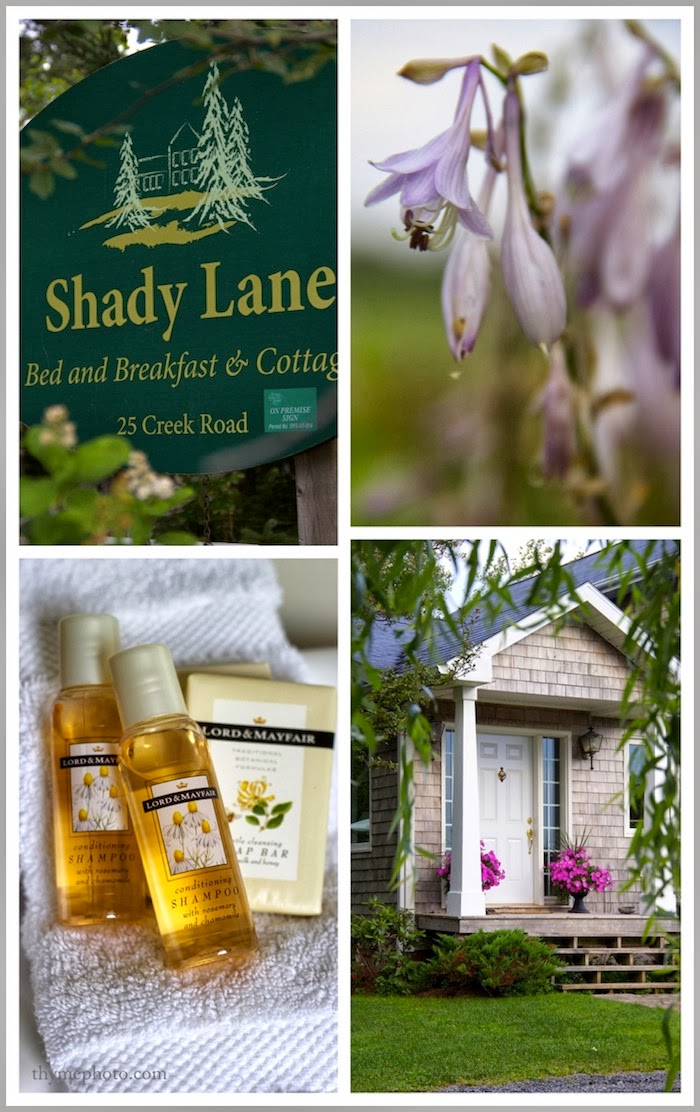 Like the surprise find B&B in Bar Harbor, Maine... Stonethrow B&B, I wasn't initially sure what to expect for our impending stay at Shady Lane B&B.  As I was so pleasantly surprised in Maine, it turned out just the same on PEI.  As we rolled down their little lane and pulled up to their dove grey and crisp white trimmed island home, and laid eyes on their cozy setting, I knew the end of our summer journey would be relaxing and satisfying. 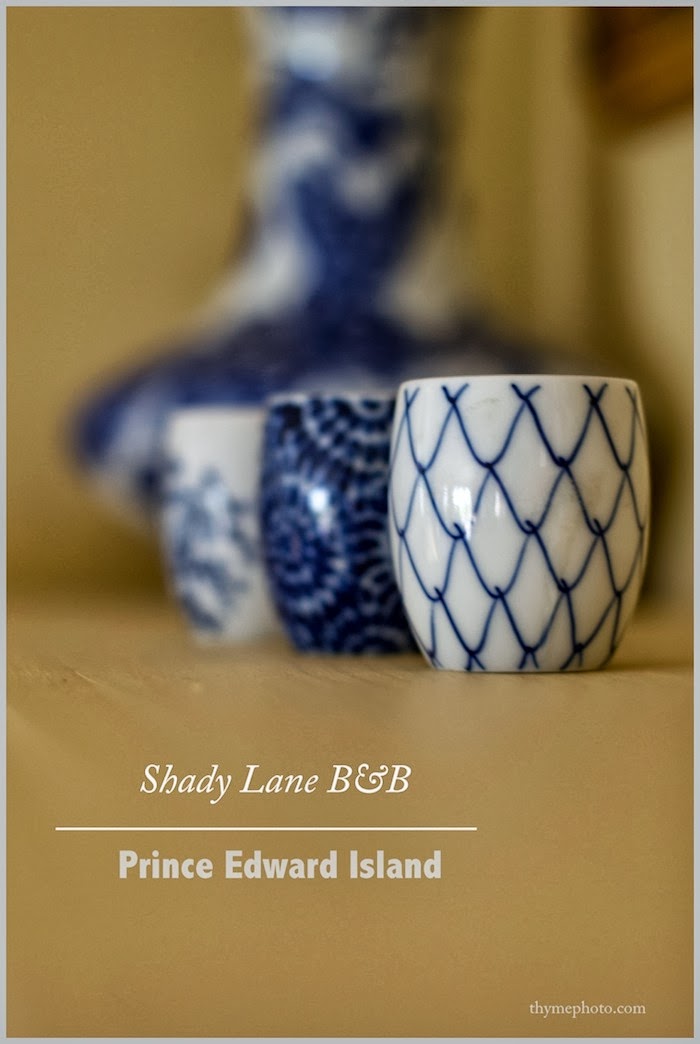 We were in an area right off of St. Peter's Bay near the tiny town of Morell.  Sweet quiet country lanes and windy biking trails run all along the bay offering charming water views on one side and lush green farm views on the other.

We settled into their home for several days, shopped at the local grocer in town, squeezed in with the locals at Rick's Fish 'n' Chips  pub, and spent time around Ian and Pam's huge island kitchen, adorned with a collection of beautiful copper pots, listening to their stories of global adventure. 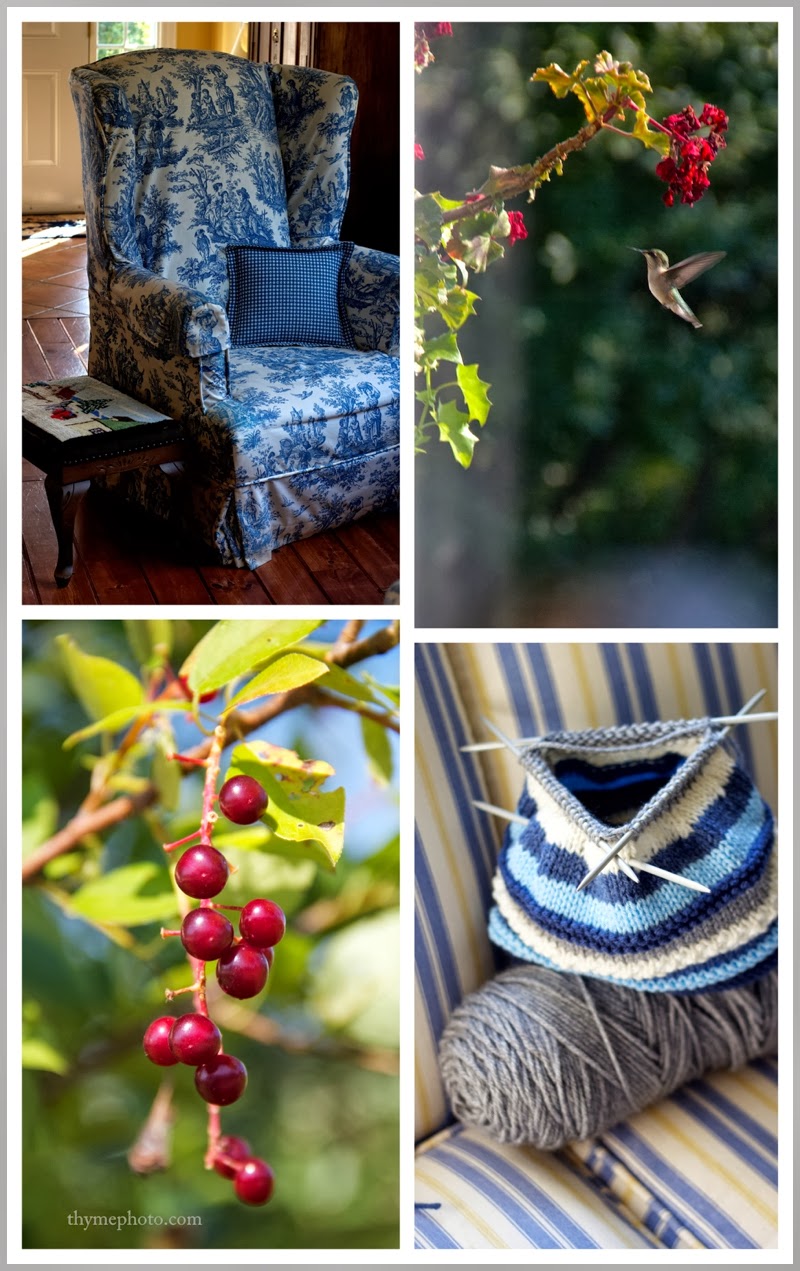 I do love connecting with people in this way.  I think people in the B&B trade are an adventurous lot, full of amusing life stories,  and Ian and Pam are no exception.  Ian was headmaster for a boy's prep school for years and that in itself is worthy of many colorful stories.  One story that was delightful to listen to was the tale of when Prince Charles and Princess Diana visited their school.

Ian and Pam were the hosts! 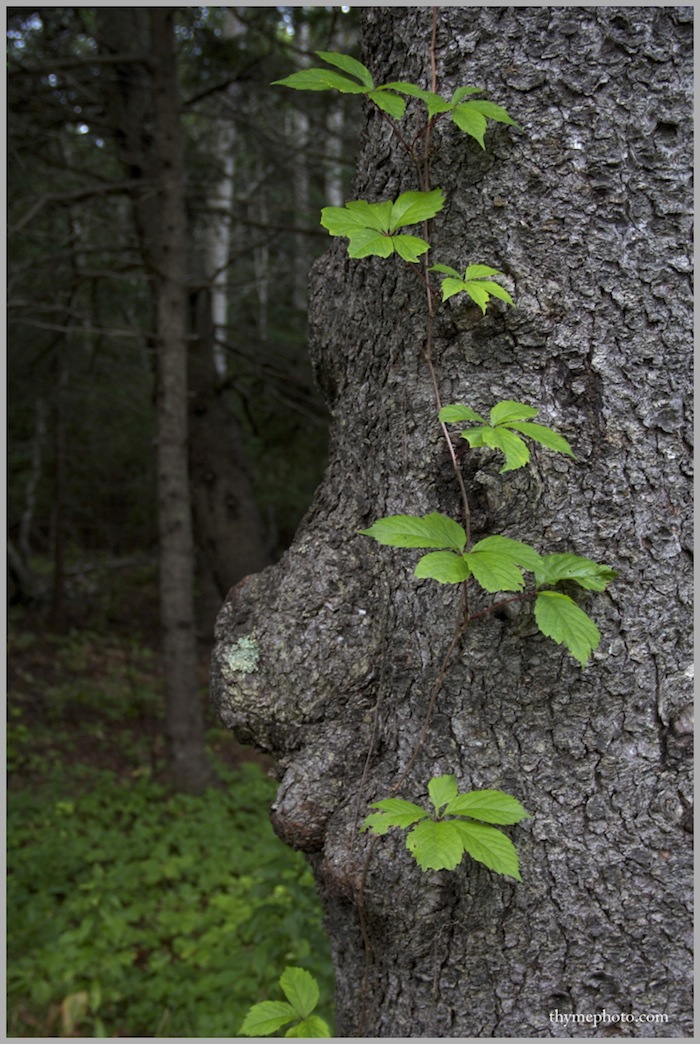 The story of preparing for their royal visit, events that were unplanned for and surprising while the royal couple were there, and the memories that were created is fantastic.  Princess Diana, so young and fragile-looking, had just had little Prince William but he was behind in England.  I loved hearing their tale of hosting such an infamous and glamorous couple! 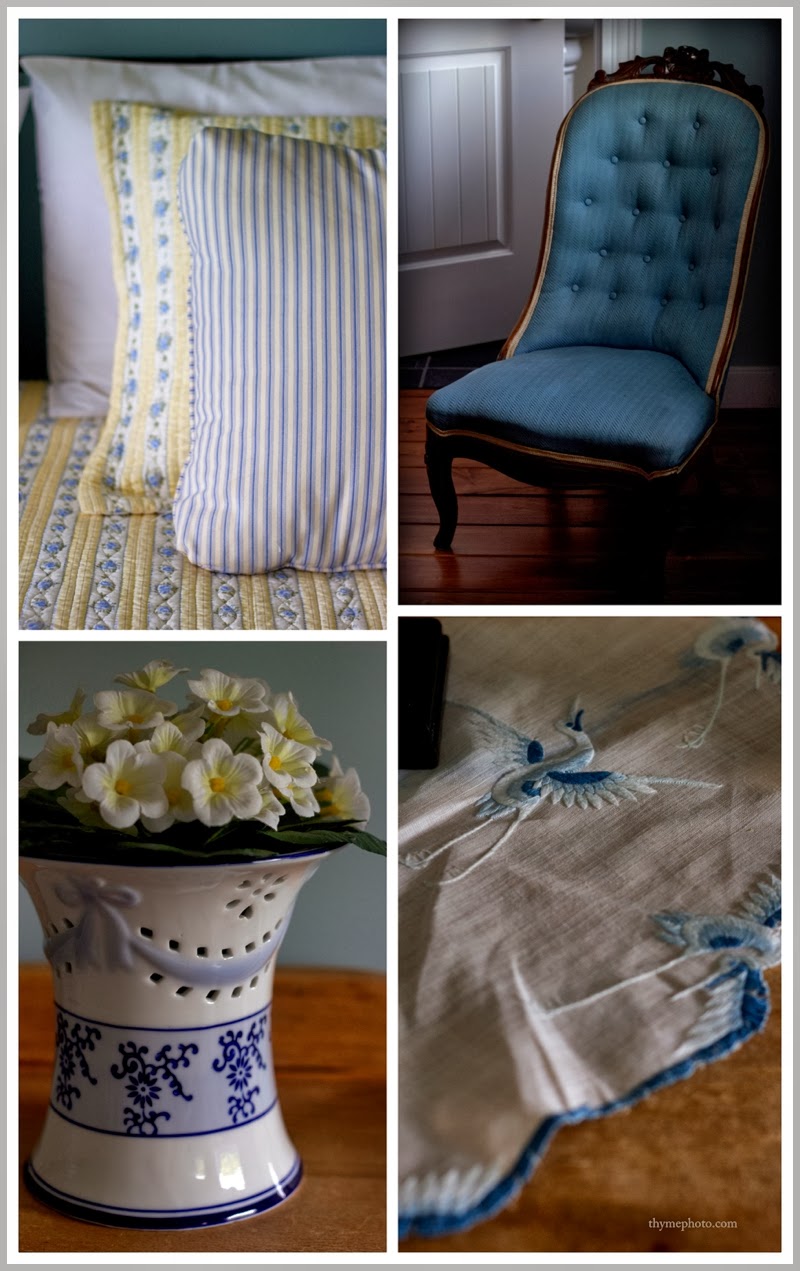 Attention to detail are certainly noticed at this B&B.  Ian & Pam have raised 4 children.  Pam is adept in the kitchen, sews, gardens, knits, and decorates with impeccable taste.  One  is assured of a carefully thought out experience.  Ian also loves being in the kitchen, works daily to keep their garden in check, and has all sorts of ideas for touring out and about the area.

Pam has a line of adorably sweet knitted baby caps. In addition, she is currently working on a cookbook that will be coming out later this year.  I was able to tuck away a copy of her recipe for "Apple Betty" and I cannot wait to try it in my kitchen! 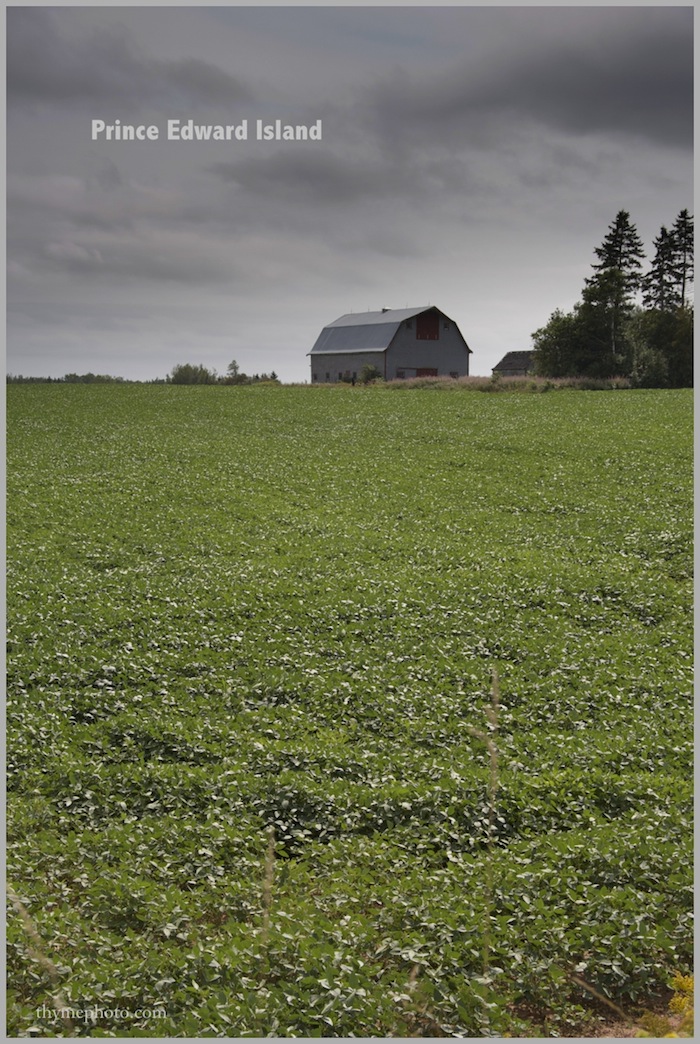 A few times, I found myself having a difficult time focusing on what Pam and Ian were saying.  Tiny little hummingbirds would flit here and there right behind them, whizzing  from flower to flower.  They would be in mid-sentence of a captivating story and I would gasp, "Look, another hummingbird right behind you!"

The swishing and swaying of the tall piney woods on the southern side of their home was yet another pleasant distraction. The trees would make such peaceful rustling sounds that I couldn't help staring out the window in the direction of the lovely sounds. 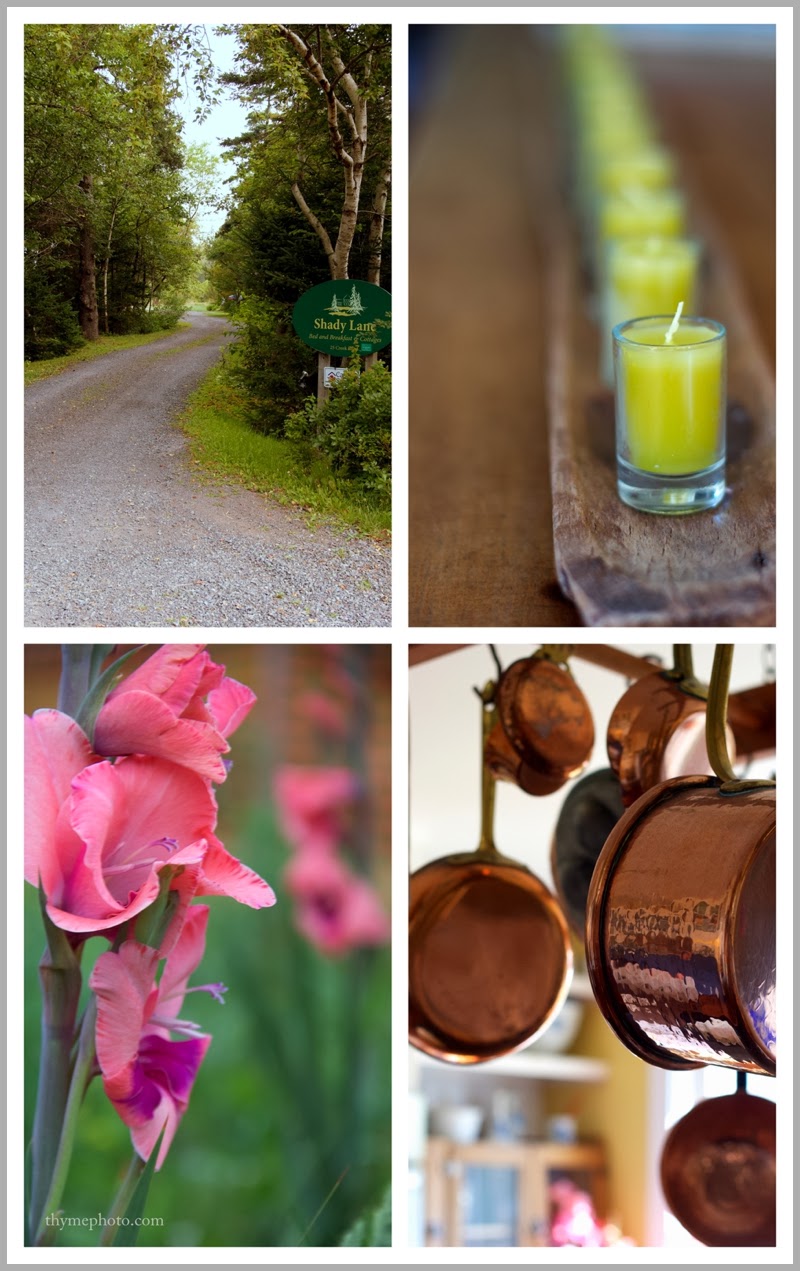 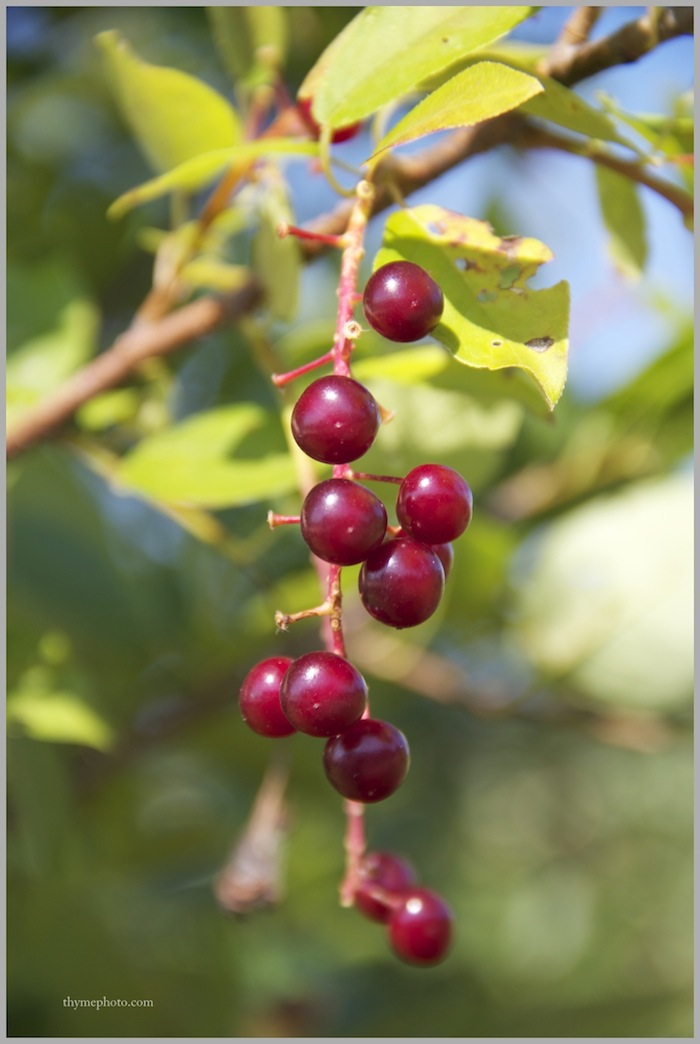 Ian and Pam's love of gardening is obvious and their house is surrounded with their beautiful flower gardens as well as a plentiful vegetable garden.  Locally sourced sausages, those adorable tiny northern blueberries, and Pam's wonderful bran muffins showcase their desire to prepare healthy and homemade breakfast treats. 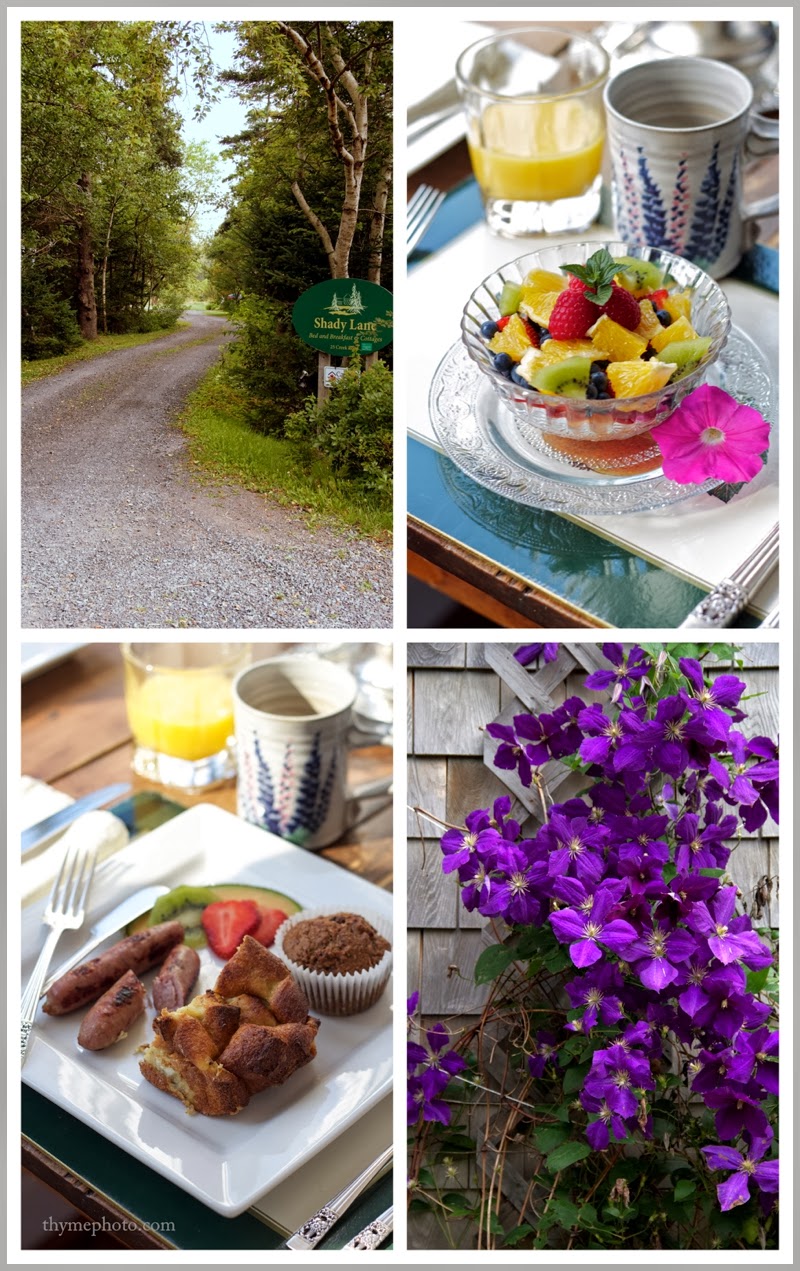 Riley and I took off one day and biked another leg of The Confederation Trail.  The Confederation Biking Trail runs all along the northern rim of the island.  It was created from a renovated train track that went out of use years ago.  We rented bikes in the town of Morell, rode alongside blackberry bushes and apple trees and attempted to burn off Ian's delicious ham and poached egg cups from breakfast that morning. 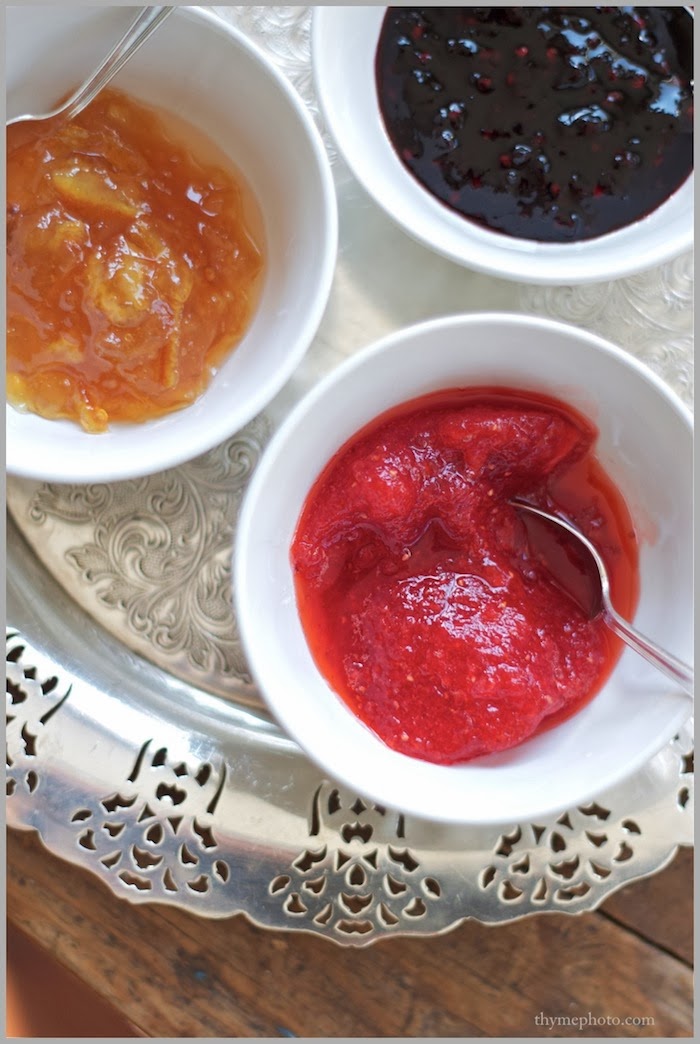 Views of St. Peter's Bay were on one side and quaint farm fields were on the other.  When we crossed the bridge at St. Peter's Bay, we were exhausted.  However, that exhaustion quickly turned into relief when we pedaled up to a series of adorable craft shops that included an ice cream shop too.  A few purchases made, tied in haphazard fashion to my bike's handle bars, and fortified by cream and sugar, we trekked back over the lovely countryside back to Shady Lane. 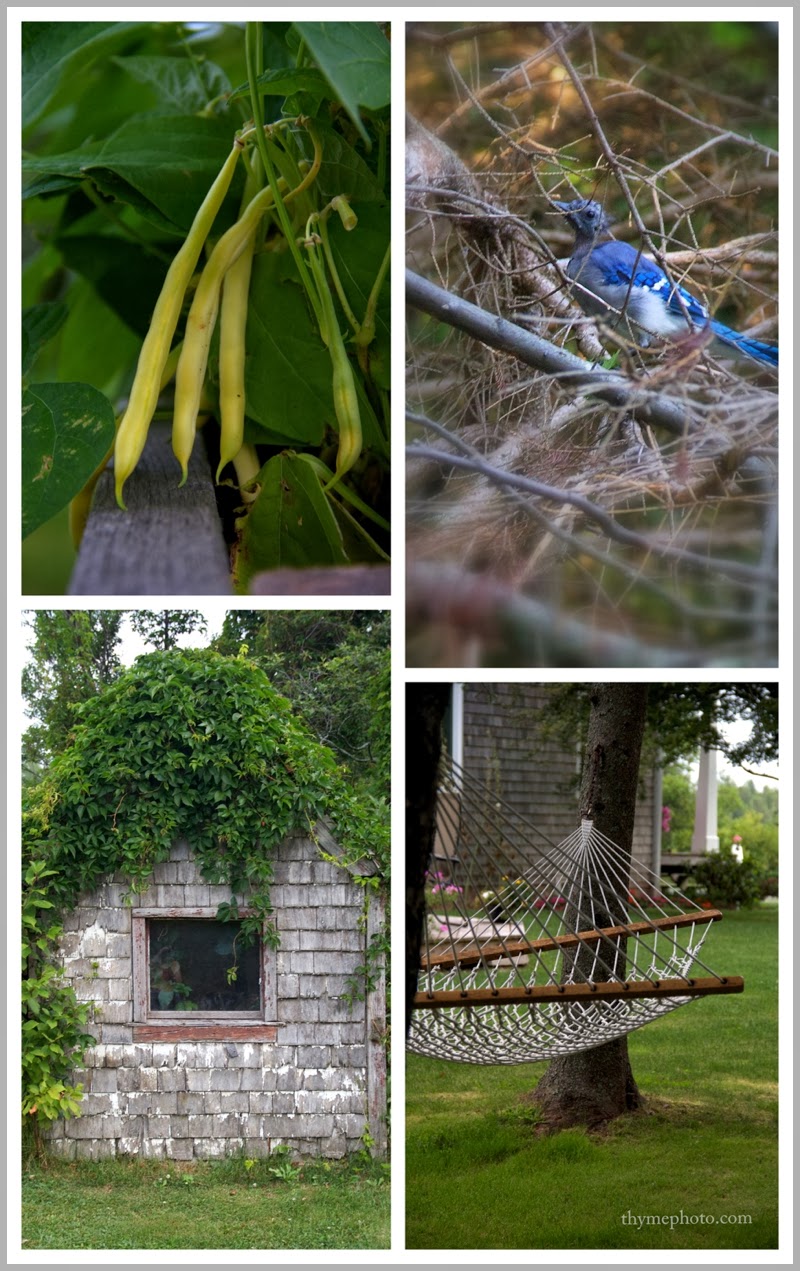 Ian and Pam are long time school teachers so running a B&B and meeting people from all over the world is a nice fit for them.  They had one family stay at their B&B from Africa recently.  They were then invited to travel to Africa and experience that family's hometown and culture.  What an amazing opportunity to swap experiences of hospitality. 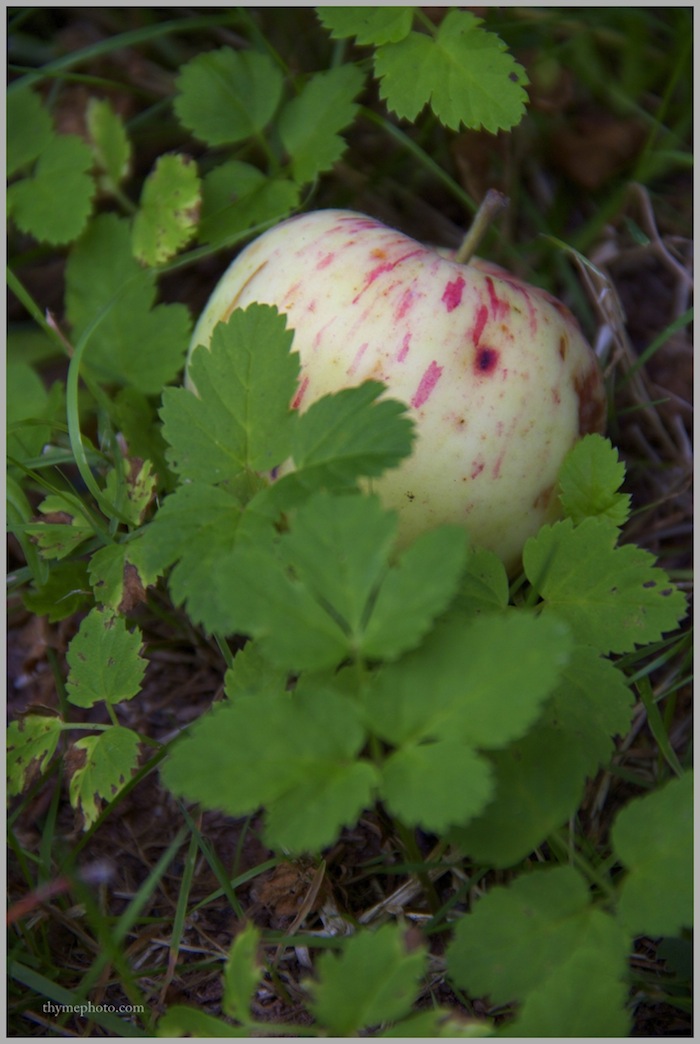 Ian and Pam share something in common with our family. We've both lived in Japan.  As teachers, they had an experience living in Tokyo, Japan.  Whereas, we were new arrivals in Japan right when 911 happened in the U.S., they were residing in Tokyo when the recent tsumani hit the island. 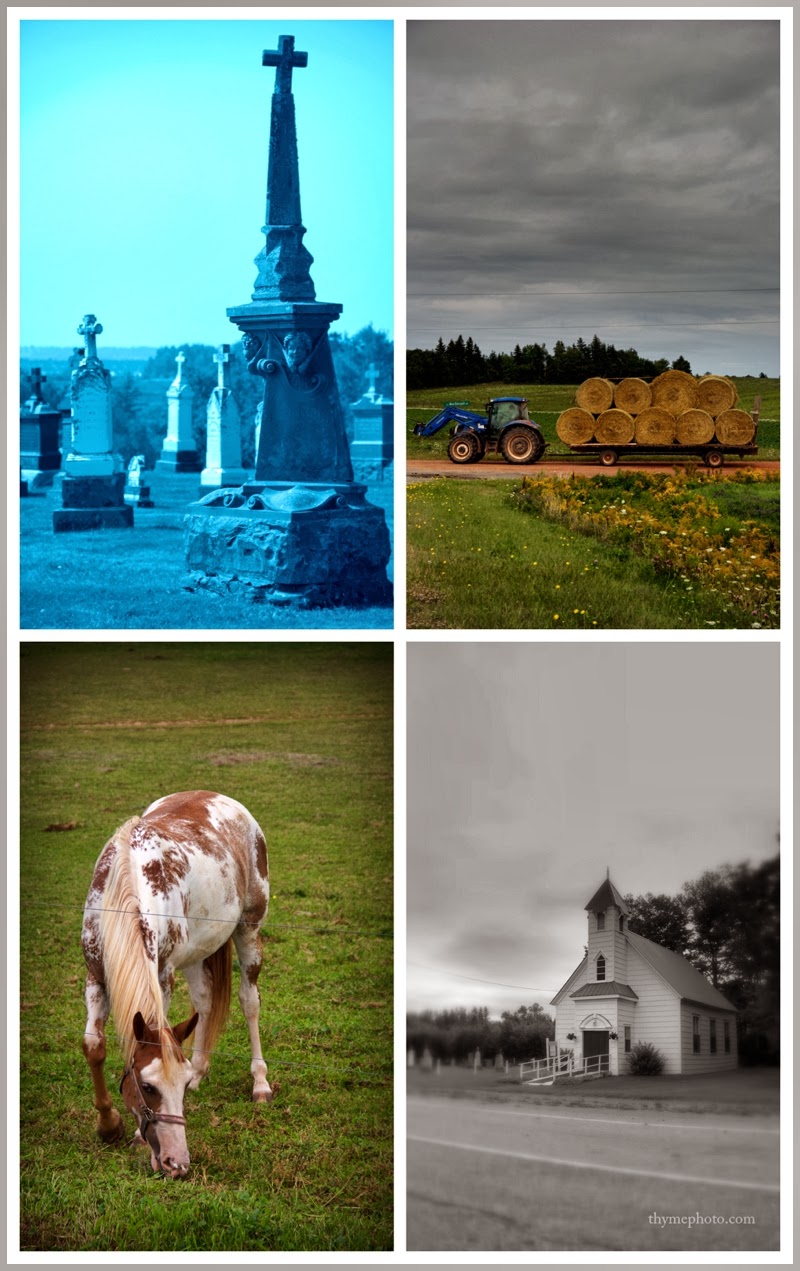 Listening to their ordeal of those terrible days when the world for them, and all of Tokyo, turned upside down was pretty heart-wrenching.  They were immediately responsible for the safety of the frightened children that were in their class when the earthquake struck.  The frantic parents had no way of getting to their children other than to walk mile after mile to get to the school.


People were sleeping on the floors of shops, on the side walks, and anywhere they could find a spot as their world struggled to get back to normal.  Listening to their stories put goose bumps up and down my arms.  Ian and Pam ended up in New Zealand for a time and then with only a few of their belongings, they eventually made their way back to Canada. 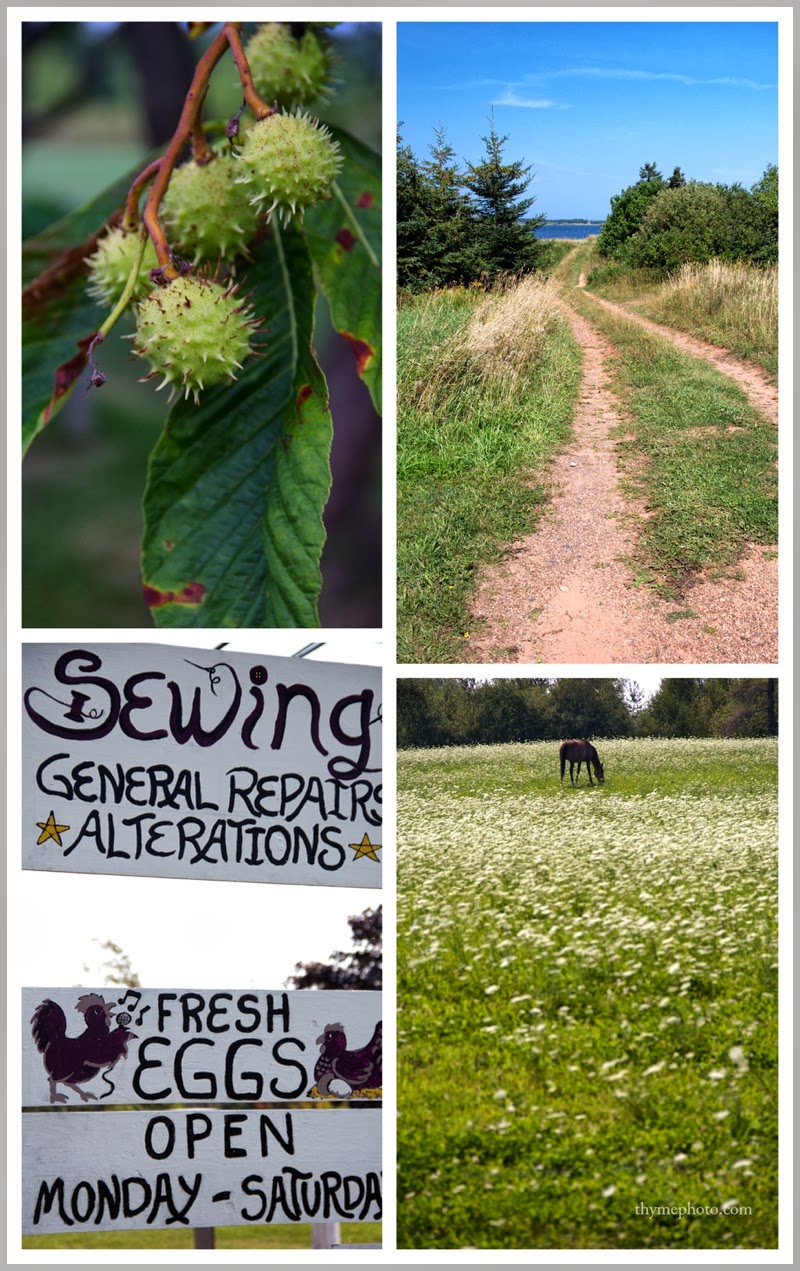 Happily, everything turned out well and they are now retired and tucked  safely on their beautiful island home.  In between treks to countries like Africa and Portugal on off season, they enjoy entertaining travelers sharing and hearing stories of adventure.

One morning, Pam brought out thick slices of her homemade wheat bread.  She also had homemade raspberry and blueberry jams to go along with it.  I do believe with a nice cup of strong milky coffee, I could live on nothing more than her thick bread and homemade jam! 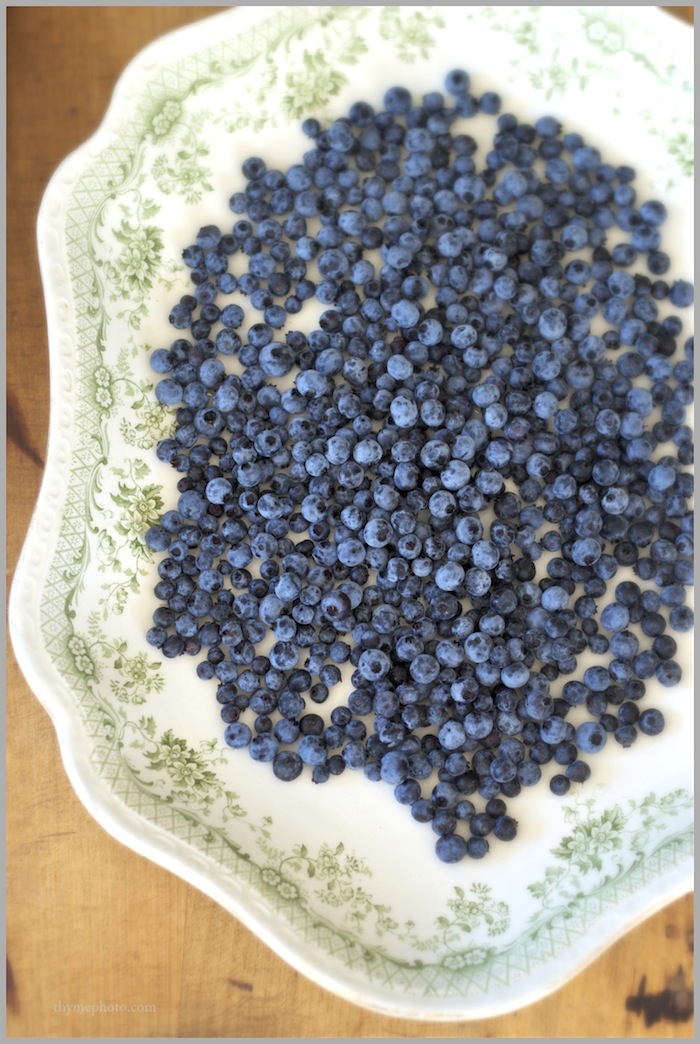 I do wonder what the island looks like as we are now  approaching October.  I imagine the wild northern winds and the reddening of leaves as the island readies itself for the change of seasons. 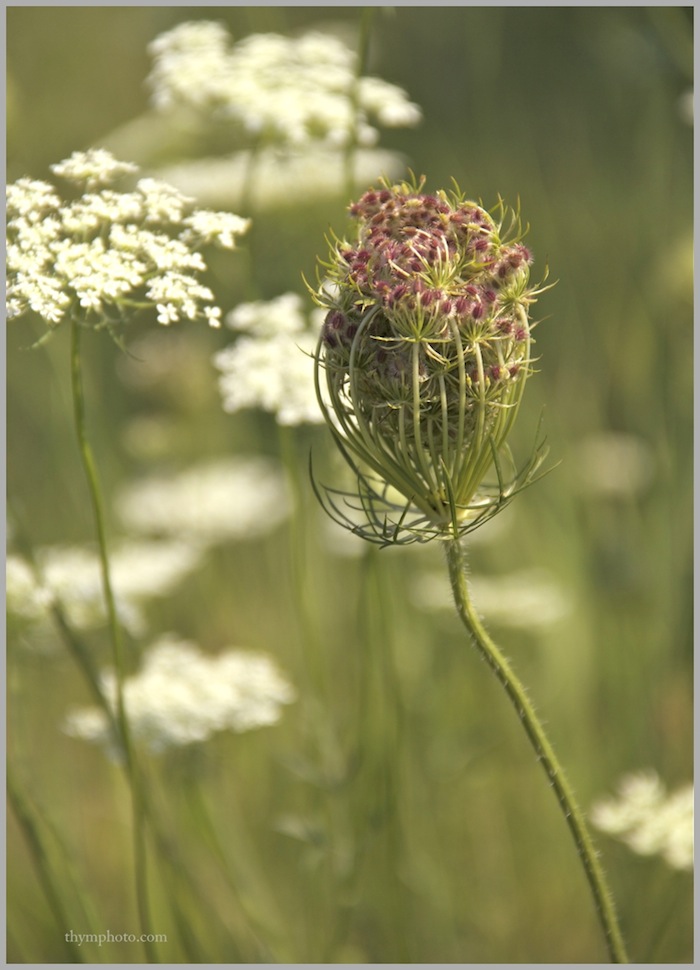 I imagine once the tourists have packed up and left, the island might even show itself off in its most beautiful costume of all.  Prince Edward Island in October must be stunning.  As sorry as I was that Patrick couldn't see the beauty of the island with me, I keep telling him that will be reason to return again someday...in October next time.

Parts of Prince Edward island remind me of another series of books by a little girl that charms the hearts of millions with her stories of pioneering life in the U.S., Laura Ingalls Wilder.

In October, we'll be rolling through the hills of Arkansas and into the southern Ozark territory of Missouri...her storybook world.  It is amazing how simple stories of everyday childhood adventures, so well written,  can leave its mark on an area for all the world to enjoy. 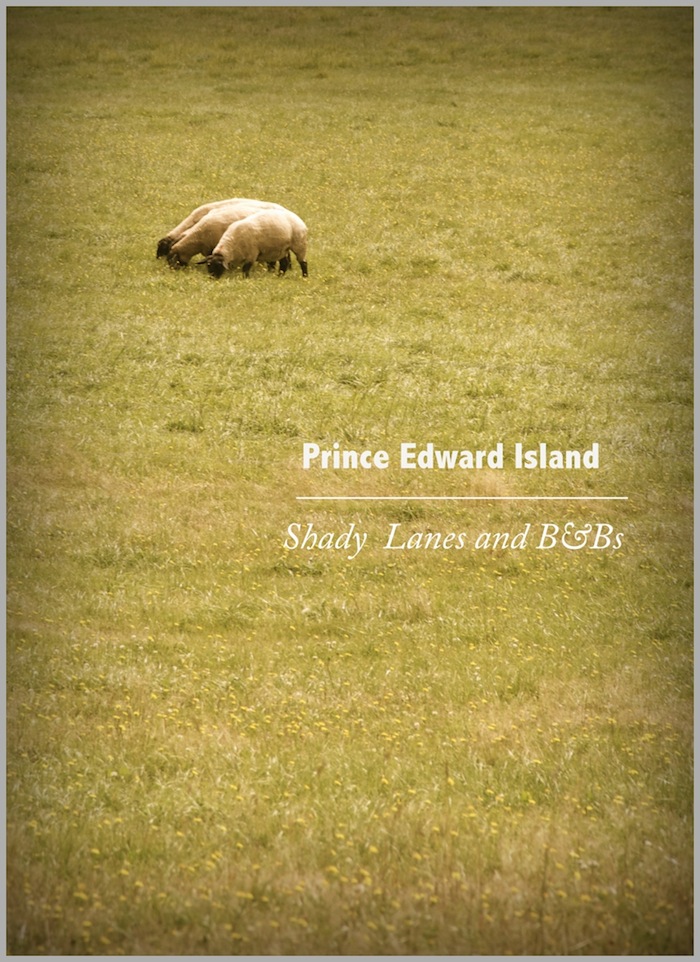 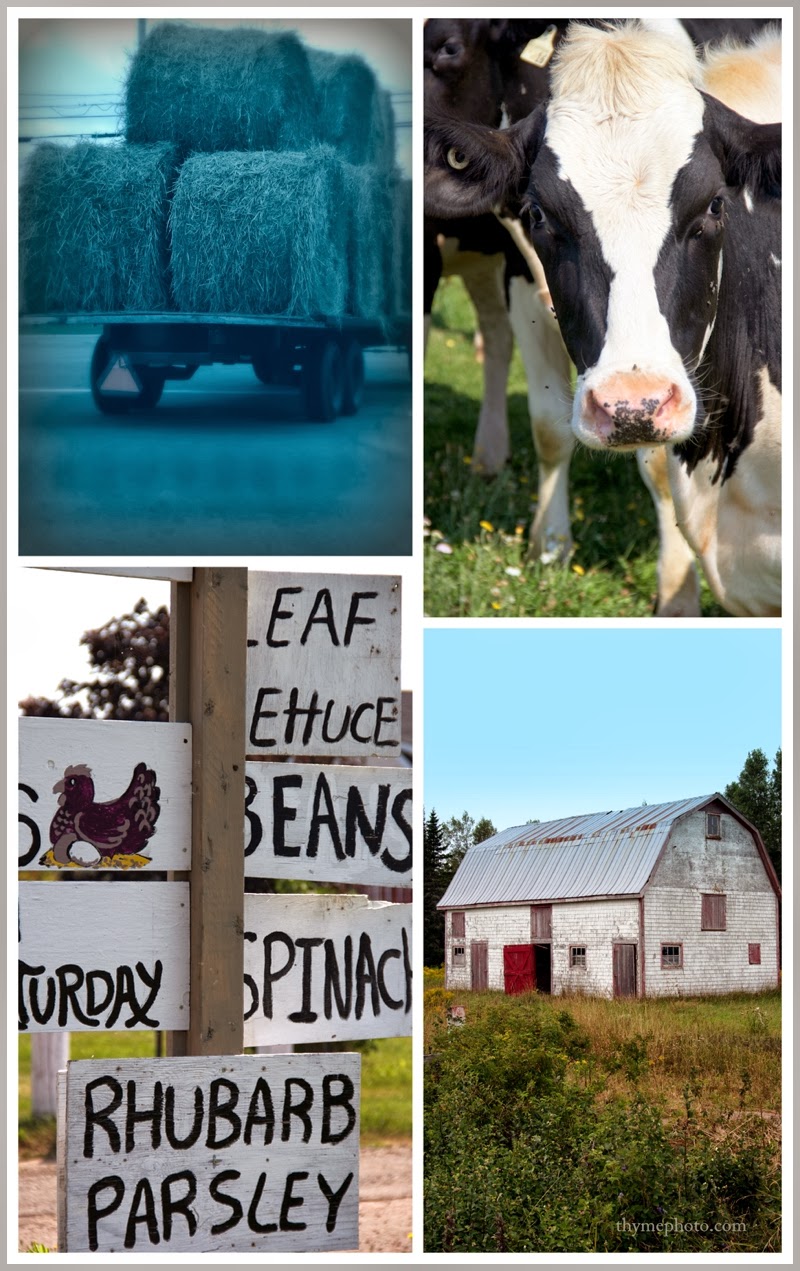 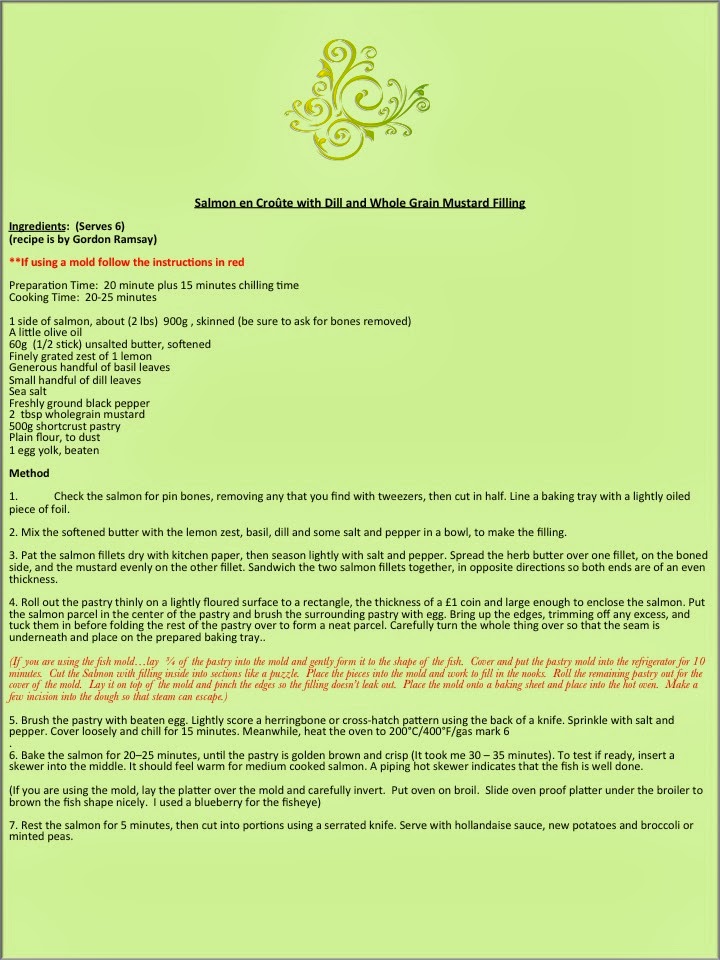 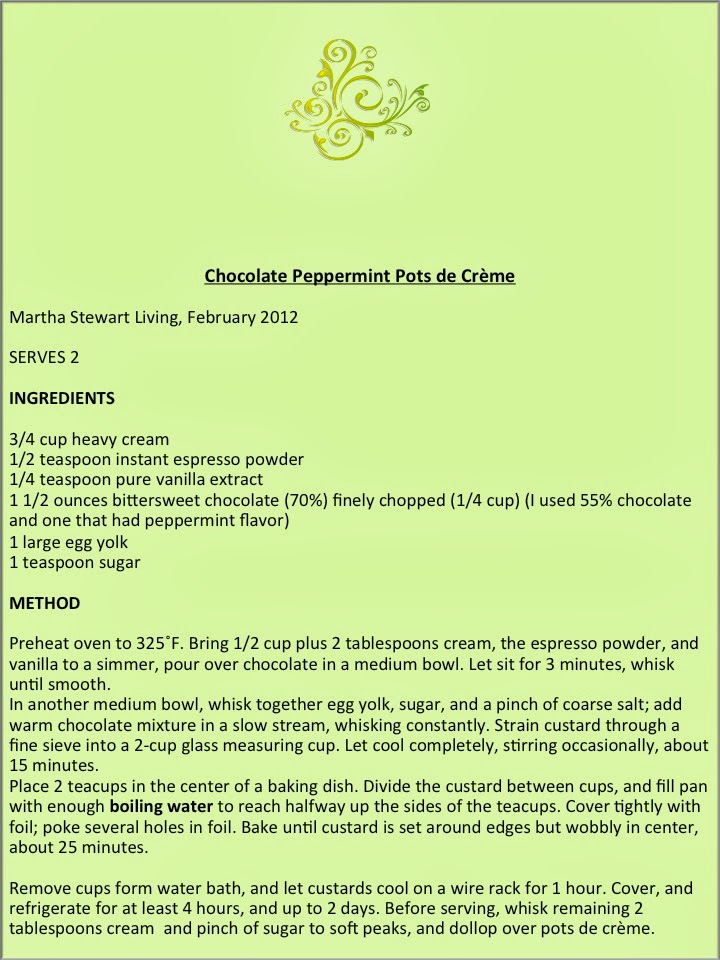