Paris...A city that swells my heart, fills my belly, and touches my soul...time after time

You know that you've entered "la belle vie" when instead of the hard crumbly pretzels packets normally given as snacks on airplanes, a thick heavy bar of french chocolate slides on to your tray table.

Life, in all of its rich, sensual, and subtle layers is so palpable in France...and nowhere more so than in its heart, Paris.


We arrived at the humming, vibrant, pulsating Gare de l'Est with its hustle and bustle ready to sweep us into this city of light, city of love, and centre d' élegance.

We decided to rent an apartment in the 6th arrondisement of Paris, called St. Germain de Près...and for a summer, live life as Parisiens, sip on scalding thick morning espressos, carry long crunchy baguettes through the streets, and whip out phrases like "toute à l'heure" and "à bientôt" .

We've stayed in the Latin Quarter before and that was a terrific spot in the city.  This time, however, I had my eye set on the quiet and elegant area of St. Germain de Près.

Along Rue de Seine is a tiny little apartment that is petite in size but ample in view.  It has an incredible street long sweeping view of Rue des Beaux Arts, which ends at the beautiful gates of the Paris School of Fine Arts.

That view became my constant companion as I finished one wondrous day after another in the city. Each evening I watched les parisiens stroll up and down their elegant streets which are adorned with flower boxes dripping with ruby red germaniums...the brilliant red a perfect contrast to the rough creamy stone buildings and ebony wrought iron balconies.


I was tickled with delight to slowly and deliciously discover the delights of the St. Germain de Pres neighborhood.  Right down our street, the Marché de Buci hummed with energy as well as its fresh seafood, fruits, flowers, and vegetables. A jazz band from the U.S. was crooning sultry songs and people flocked to the market area because of the energy and mood that was created there.

The first weekend was the french Mother's Day holiday so the flower markets were swollen with lovely bouquets of  fat peonies, roses, and ranunculas. 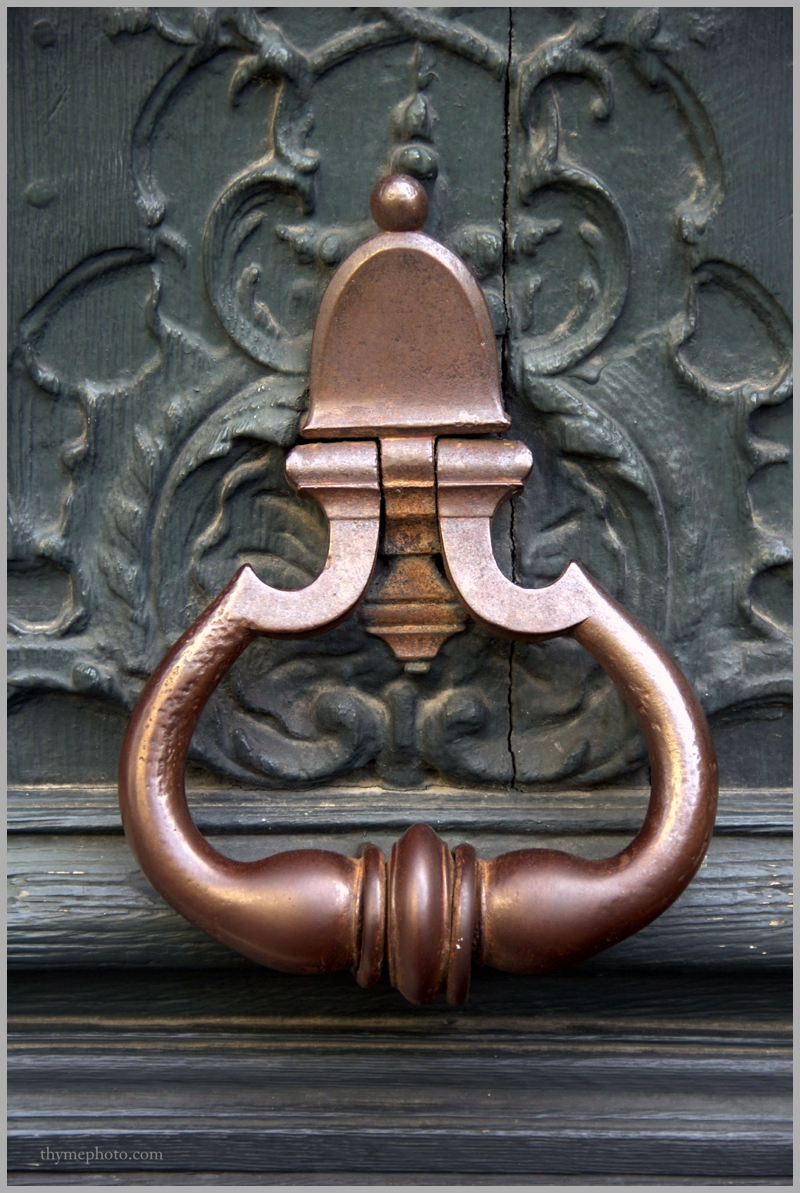 The bustling boulevard of St. Germain de Près has its highlights but it's the small winding narrow passageways that branch off from there that beckoned me to explore the many art galleries,tiny boutiques, and diverse restaurants.

From our apartment, we could hear the lovely soft bells of St. Germain de Près, the oldest church in Paris ringing routinely throughout the day.  Often, if I was trying to get my bearings as to which way to turn, I used those soft beckoning bells to lead me in the right direction.

There is something understated and warm-hearted about the St. Germain de Près neighborhood.  People wave to one another.  Mothers and Fathers walk their children to school in the morning, stopping to wave at the art gallery owner as  he or she is opening up shop, or the little old lady out walking her dog.  I felt like some scenes came right out of my daughter's beloved Madeleine stories.

One day a car was about to be towed away and several locals emerged from the surrounding shops.  They clustered around the supposedly doomed car parked in the delivery only spot. The shopkeepers and residents flourished their hands in typical french fashion, making energetic phone calls in order to locate the owner so that his car would not be towed and the day would be saved from "le catastrophe".

Having lived in NYC, I knew there was little chance the tow truck driver was going to cave.  Incredibly...as the scene unfolded before my curious eyes, the little Citroen was saved.  With lots more hand gesturing, additional shoulder shrugging, and loads of cheek puffing...everyone located the owner just in the nick of time.  The day was saved.  Fines were paid but no little local french car was towed that day. Vive la France! 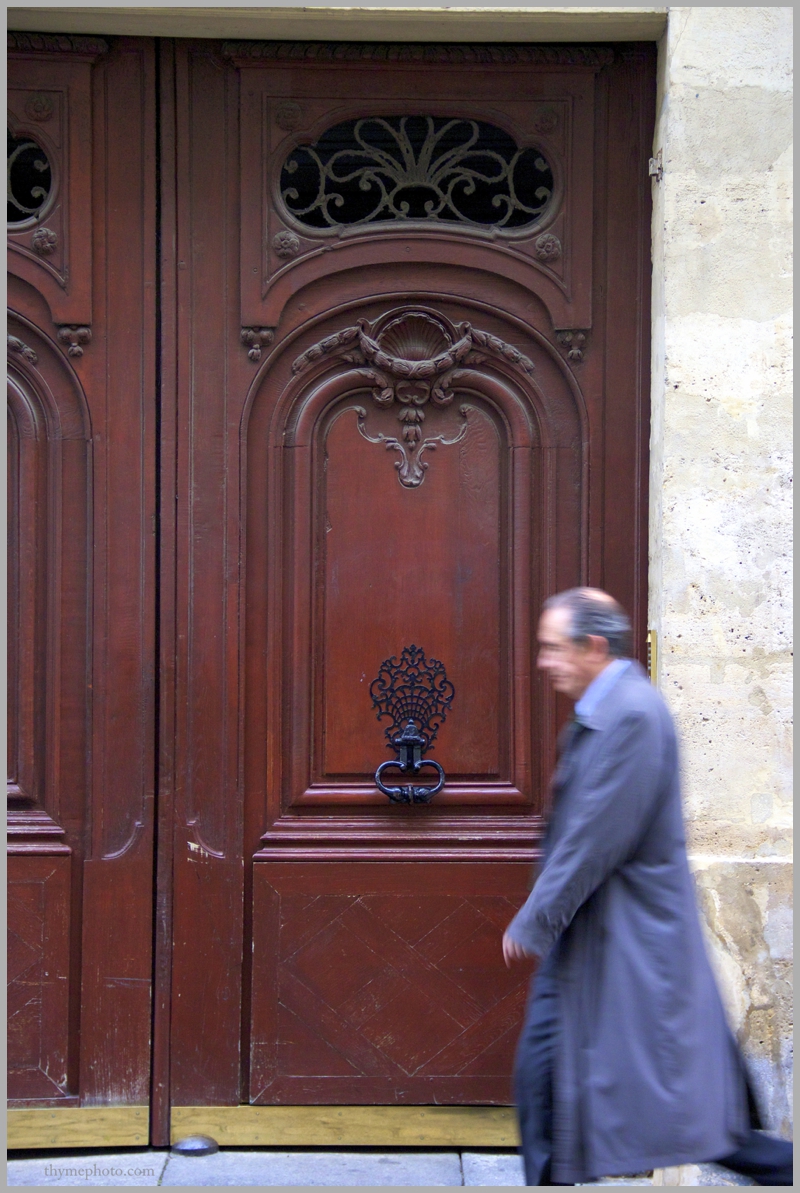 There was one particular shop, tucked between art galleries on rue Bonaparte, that kept drawing my nose to almost press against the glass each time I passed by its glowing soft interior displays.

It is called Buly 1803.  It is, at first glance, an apothecary shop that looks like it has frozen in the 19th century as time moved forward all around it.

The owner, searching for a beauty brand to identify with Parisians, uncovered some archives of a famed Parisian perfumer, Jean-Vincent Bully.

It was decided to bring the old recipes of beauty soaps, perfumes, and lotions back to life again.  The store, hemmed in gnarled elm and burled walnut encase the elegantly designed oils and lotions which all work together to give the appearance the shop has been resting there for centuries.

But, in Paris, what truly lures one directly over the thresholds are the pastry shops, or patisseries, filled with such tiny works of delicious art that one can hardly imagine eating such baked finery as opposed to only staring at these tiny creations. 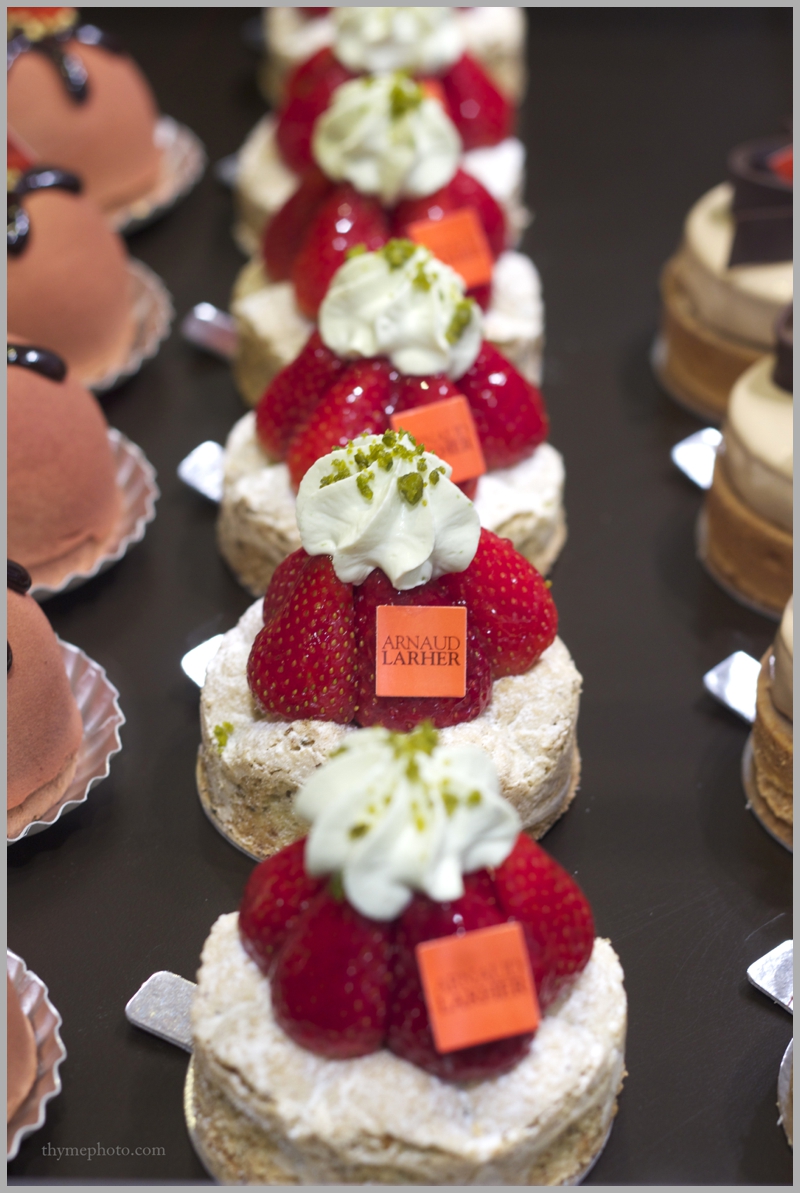 From the artisan boulanger Eric Kayser to Josephine Bakery around the corner from our apartment, no day seemed to come to a close without savoring some little morsel of edible art. 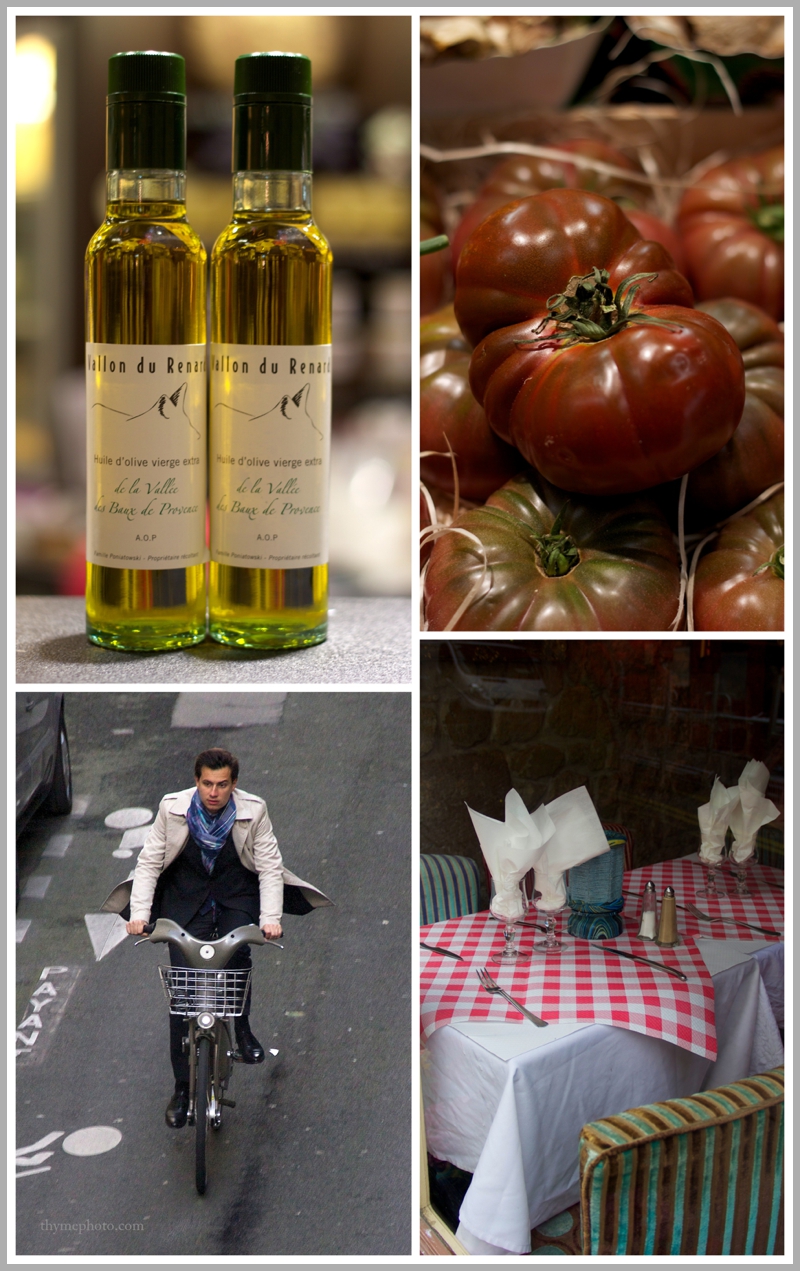 St. Germain de Près neighborhood has an understated chic-ness that can't be overlooked but at the same time isn't an over-the-top fashion scene that is pushy and arrogant. 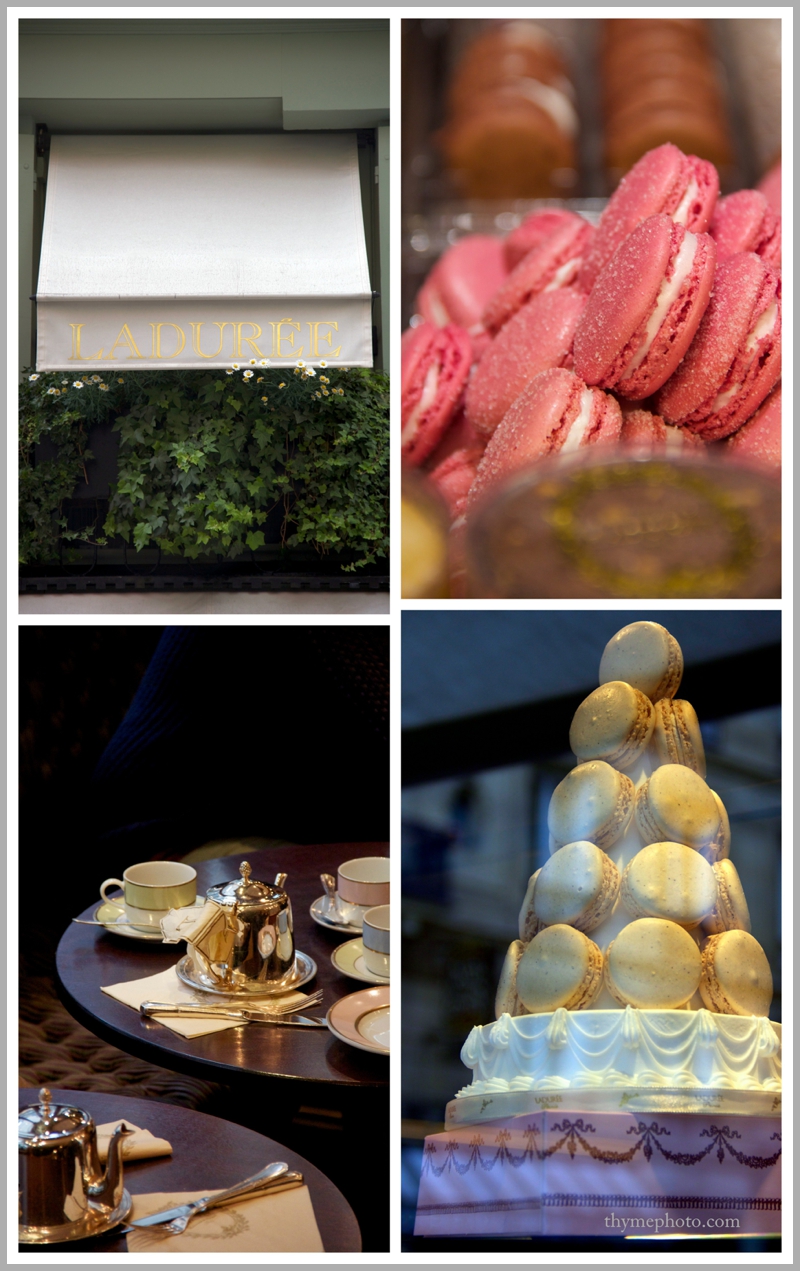 I say try them all, develop your own opinions, and let the conversation fly as you battle it out with an added layer of opinions to throw into the fray.


Riley and I carefully sampled the macaron offerings in our neighborhood.  The café macaron from Ladurée left me crooning a sweet tune as I enjoyed each bite.

However, the salted caramel and the rose-flavored macarons from Un Dimanche à Paris halted conversation at our table.


For me, a highlight of any trip is touring through the local grocery market.   Whereas, street markets thrive in Paris and are wonderful places to buy fresh produce, I perused the grocery aisles of the local Carrefour market a few blocks away from our apartment to feel even more like a local.

The many bridges linking the right and left banks of Paris each have their own character and personality.  Some of the bridges are haughty and adorned in gold leaf covered statues.  Some are understated and hardly worth noting.

But the Pont des Arts is truly a captivating bridge to cross over the Seine River.  The railings on each side are covered with padlocks, or love locks.  Couples write their names on locks, attach them to the bridge, and throw the key into the river to symbolize their everlasting commitment to each other. 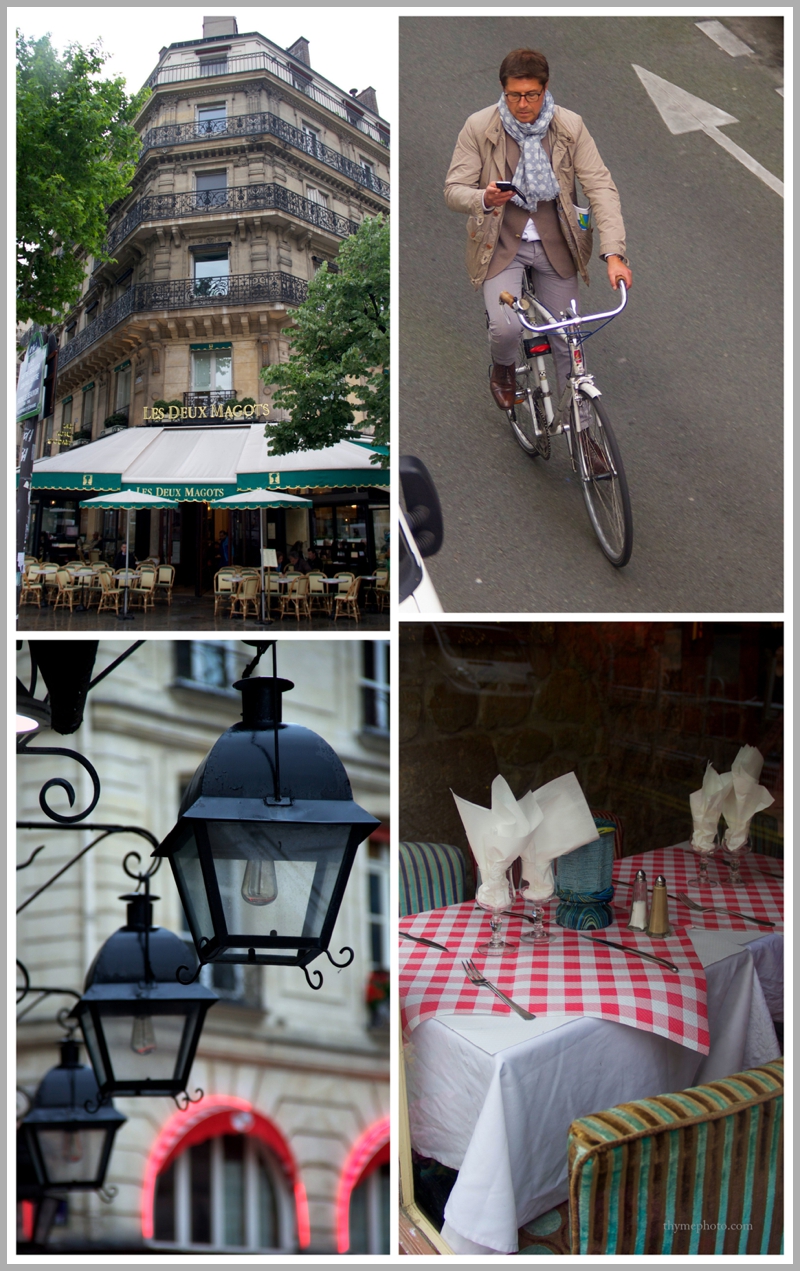 The number of bikers in Paris is truly admirable.  In other cities, the free bicycles on offer sit lined up neatly at their kiosks looking as if they are hardly used by locals.

In Paris, however, the number of bikers seems almost as numerous as the number of motorists.  Many of them ride using the city provided bikes that are stationed all over the city.

And in true Parisian style, the bikes become another platform to showcase an assortment of flapping chic trench coats, wind whipped elegant scarves, and the latest stylish footwear.

More so than the Vespas and Smart cars, if I lived in Paris...I would be a biker, wrapped in my assortment of fashionable scarves and having a draped cape that flies out at the sides waving their elegant folds in the passing breezes. 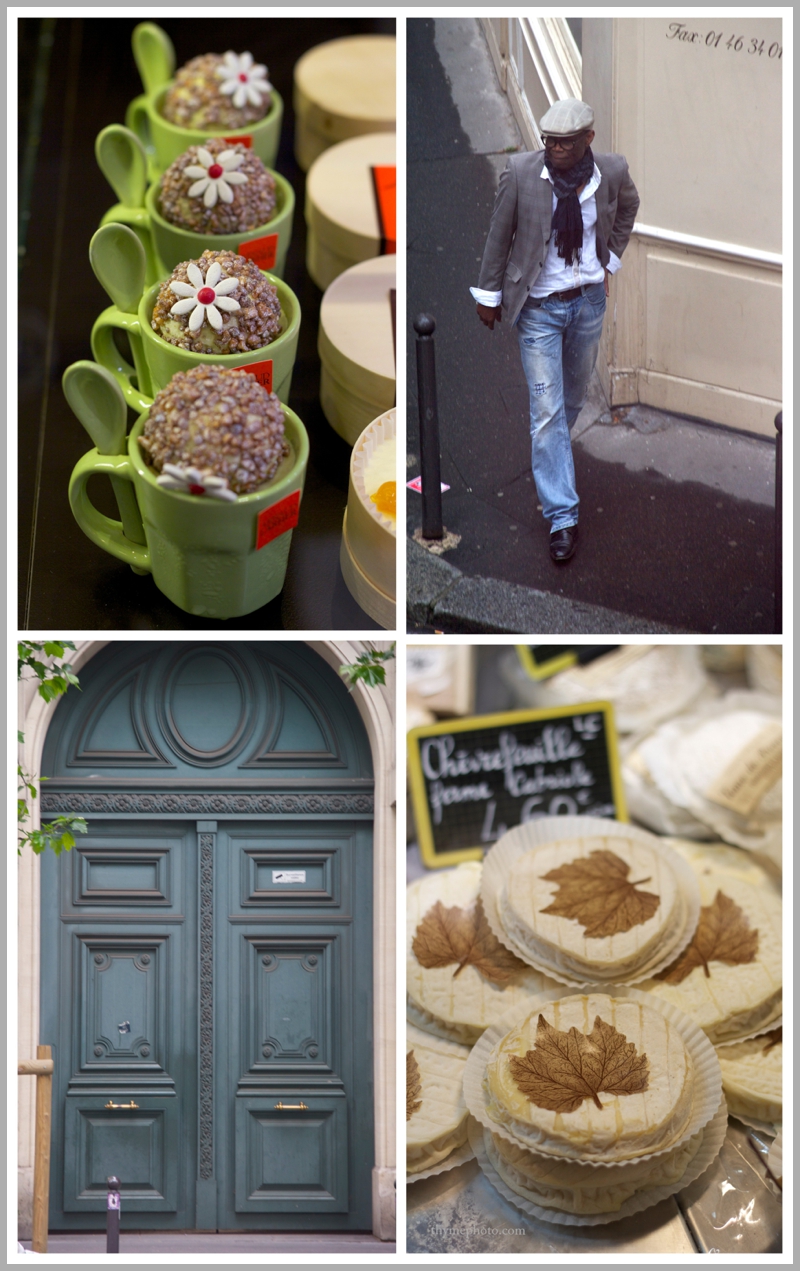 I spent hours sipping my strong french roast coffee sitting at the balcony of our tiny little apartment along Rue de Seine watching the daily activities go by my window. 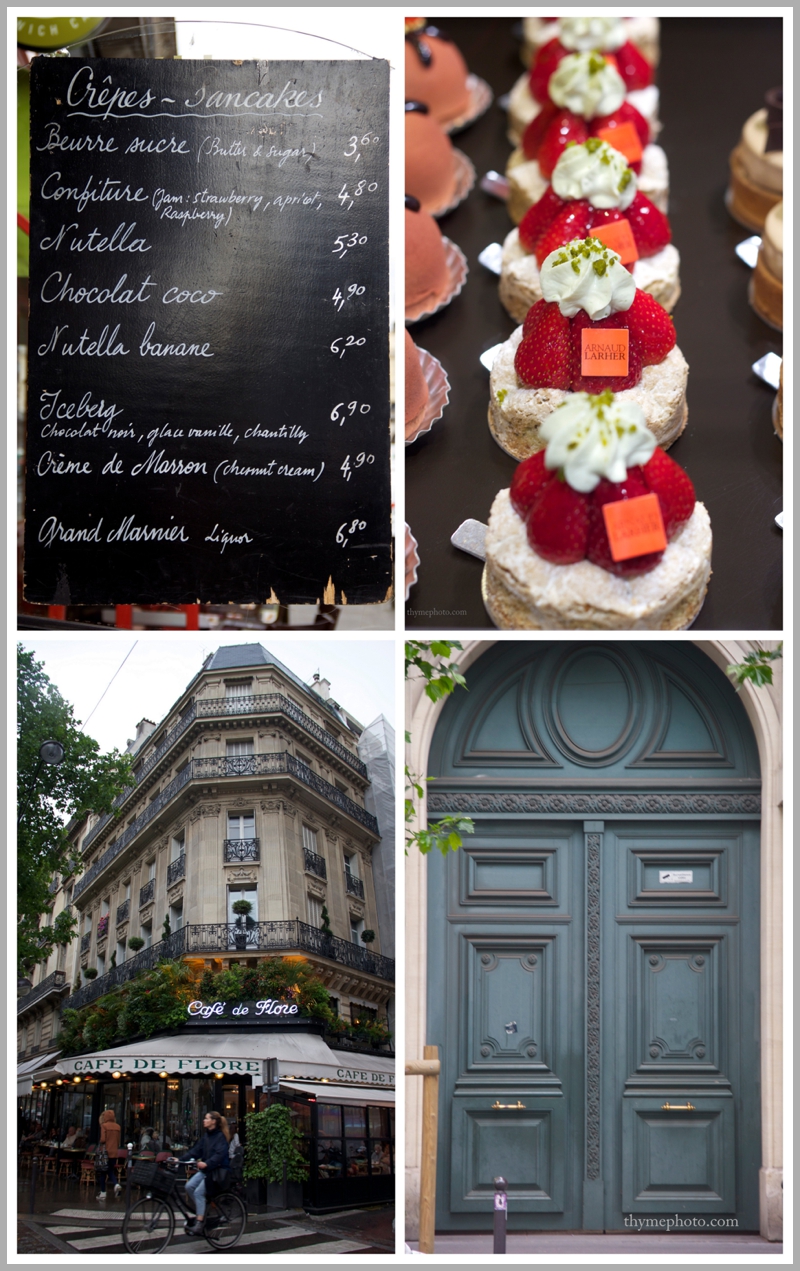 Riley and I would pound the pavement seeing the requisite sights that one not dare miss when in this breathtaking city.  But, it was the early morning hours and the early evenings that I enjoyed the most...sitting quietly absorbing life ebbing and flowing all around me. 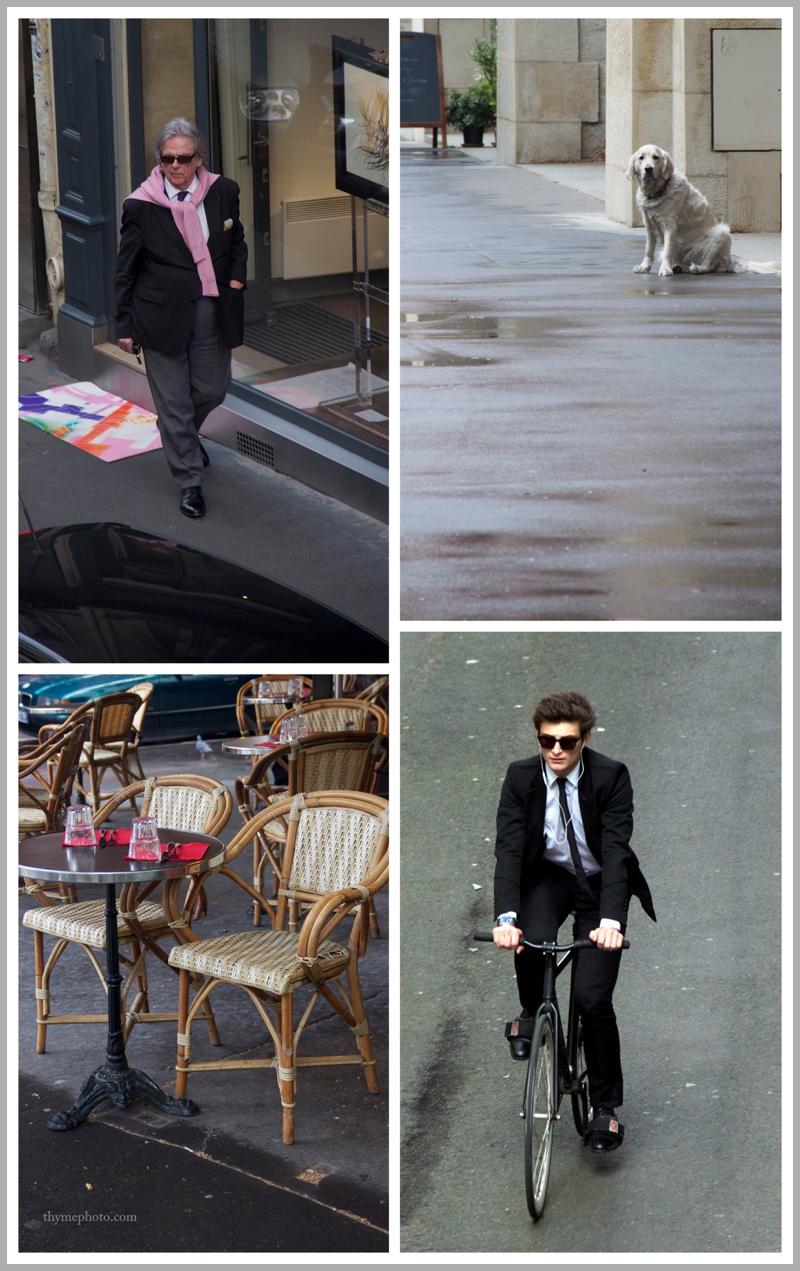 In the early mornings, the streets were absolutely still and quiet, but I was routinely sipping my hot cup while ready to see the day unfold out our second floor windows. I couldn't believe the peacefulness that rests over the streets of Paris.  So many people all respecting that the day should not yet begin until that crusty baguette is eaten and that roasted coffee are enjoyed in peace.


Dutifully, the trash trucks would begin lumbering down our quiet street, every single day.  Hoses sprayed down the previous day's trail of activity.  Sweeping sounds of brooms scraped the pavement and collected the remnants of life the day before, readying the streets like setting a stage for new day's showing. 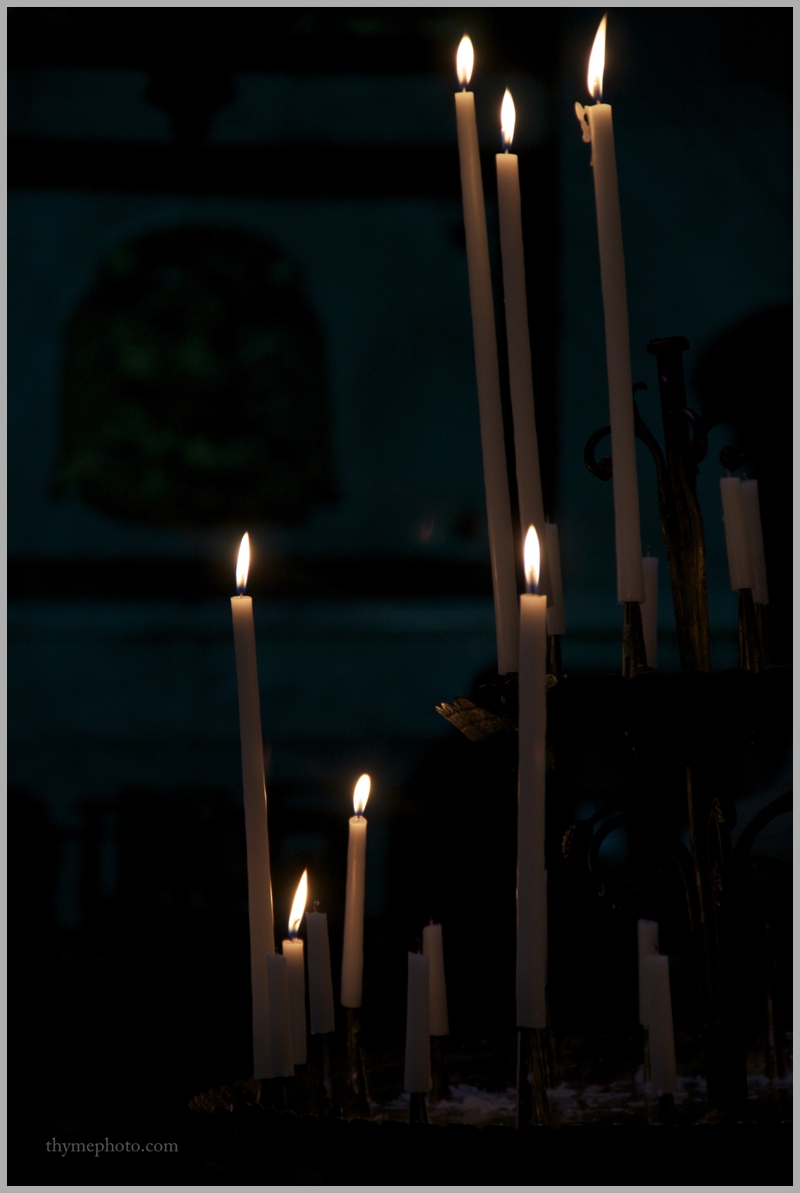 Then the dogs would trot out for their morning round on the block.  The owner's would stop and chat with the little children on their way to school.  Little rectangle backpacks hung from the school children's shoulders as some of them pushed along on little scooters and some clung to their mother's hands as they waved to the neighborhood dogs passing by.

Many art galleries are tucked all along the St. Germain des Près neighborhood.  The owners would arrive one by one and gently slide up the metal doors to get the store fronts ready for a bustling day... of tourists like me. 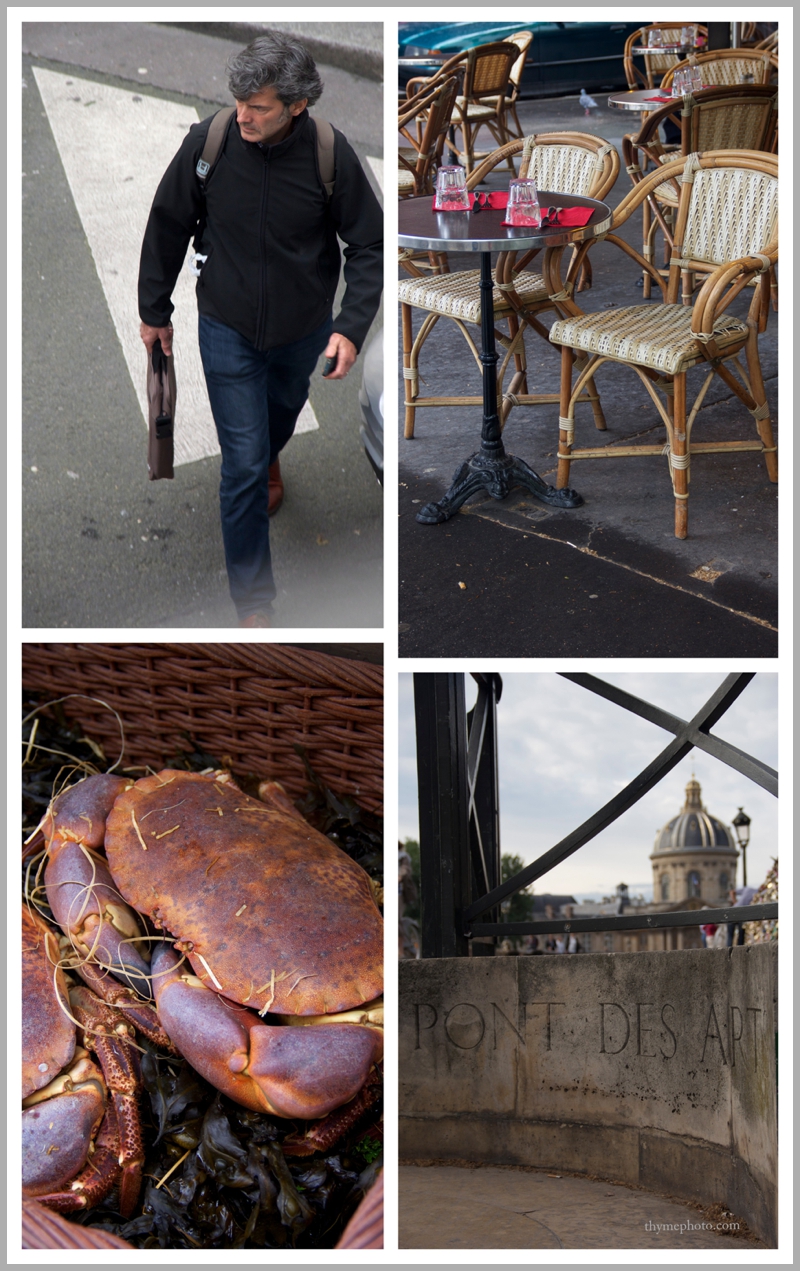 One evening, the streets began to hum with a busier tone than I was accustomed to hearing at that time of day.  I kept returning to my perch on the window to see what new activity was occurring that I didn't want to miss observing. 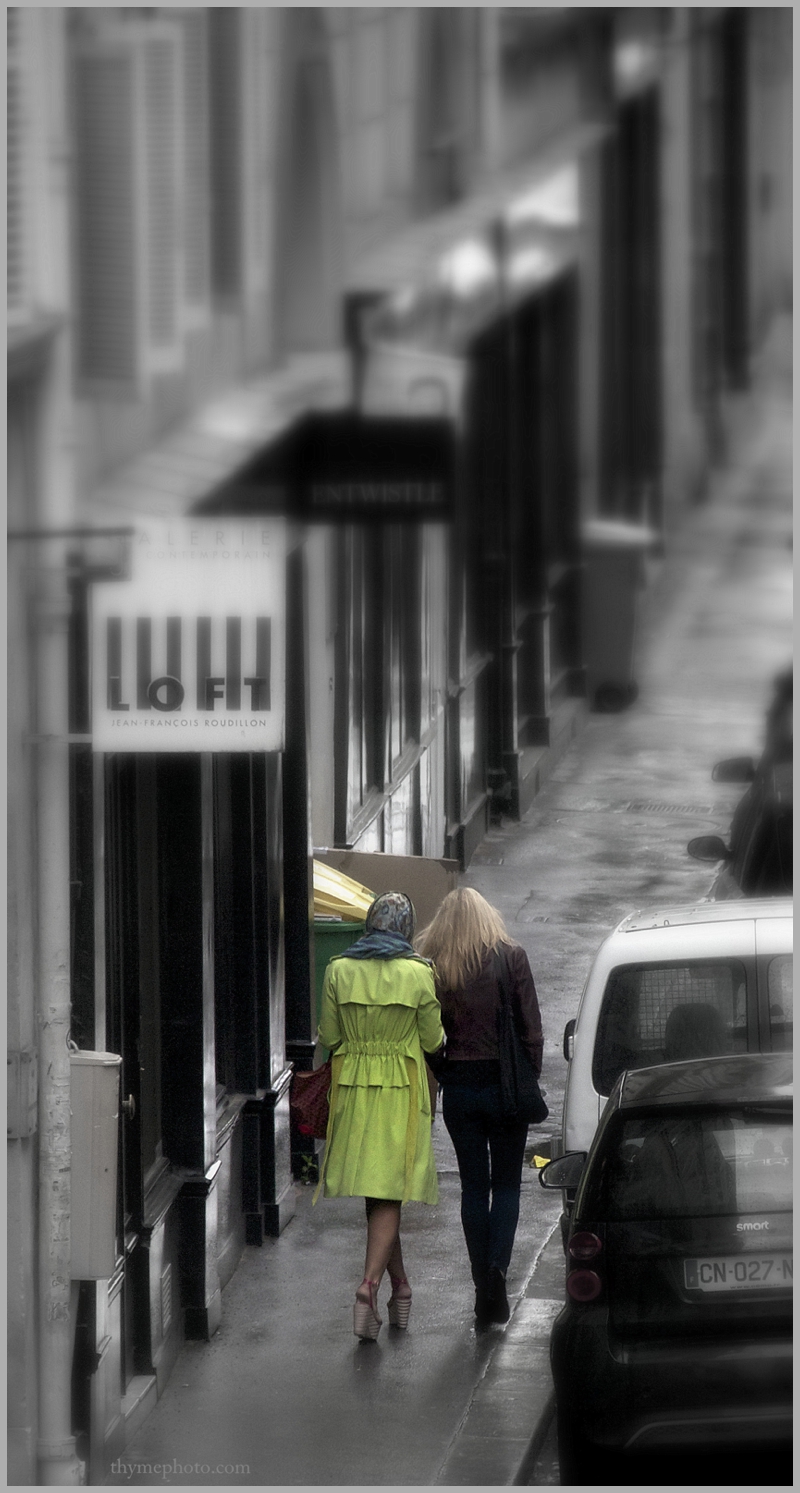 It soon became very apparent that an "art walk" was filling the streets with music, open doors, art lovers, and an assortment of activity that glued me to my open shutters and black wrought iron perch for hours on end. 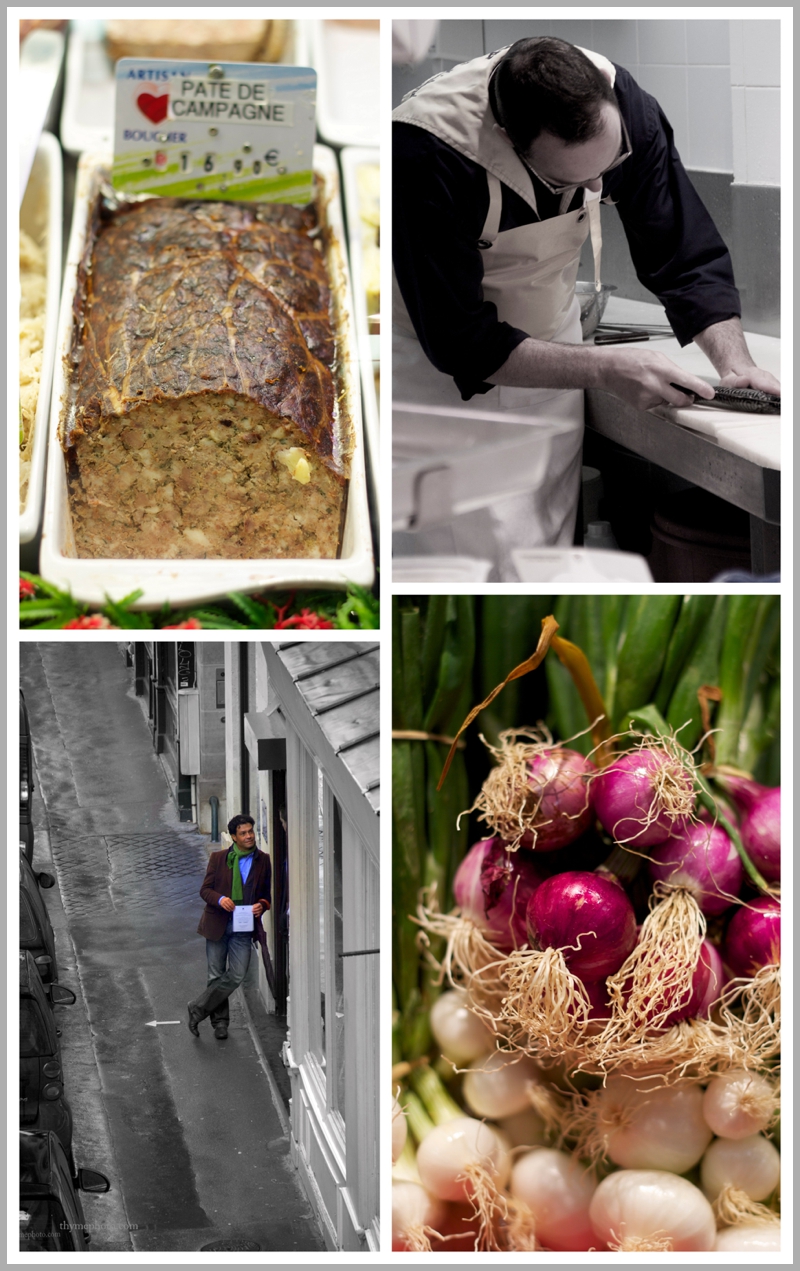 Parisiens waved to one another, kissed on both cheeks, smoked their cigarettes with great hand flourishes. Everyone seemed to enjoy a delightful evening gayly strolling up and down Rue de Seine and Rue des Beaux-Arts laughing and enjoying the open galleries well into the night. 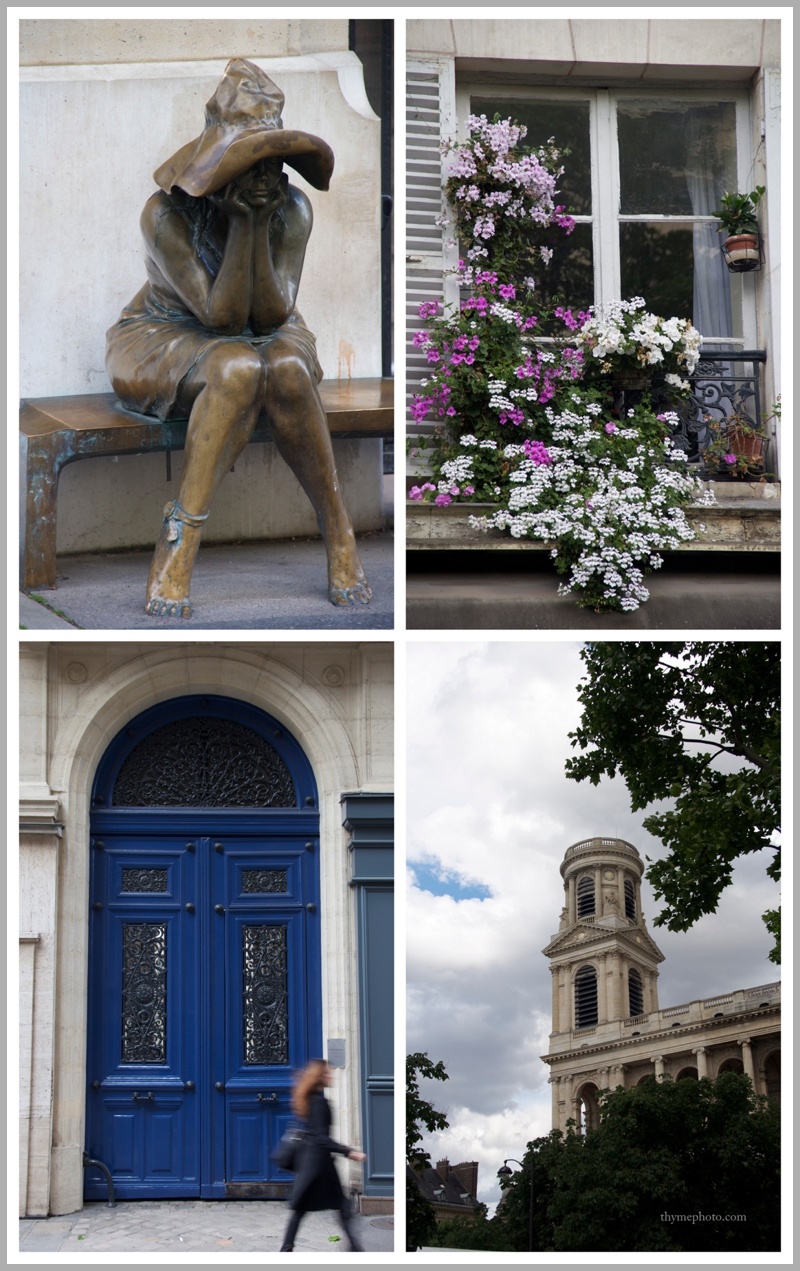 This was my favorite night of all.  Every now and then, someone would spot me and wave a bonjour as I languished over the railing absorbing the slow meandering gait of every couple, whizzing by of each scooter, "ting-ting'ing" of the little bells of each biker, zig-zag walking of each dog walker, seriousness of each baguette-toter, and hopefulness of each art gallery owner. 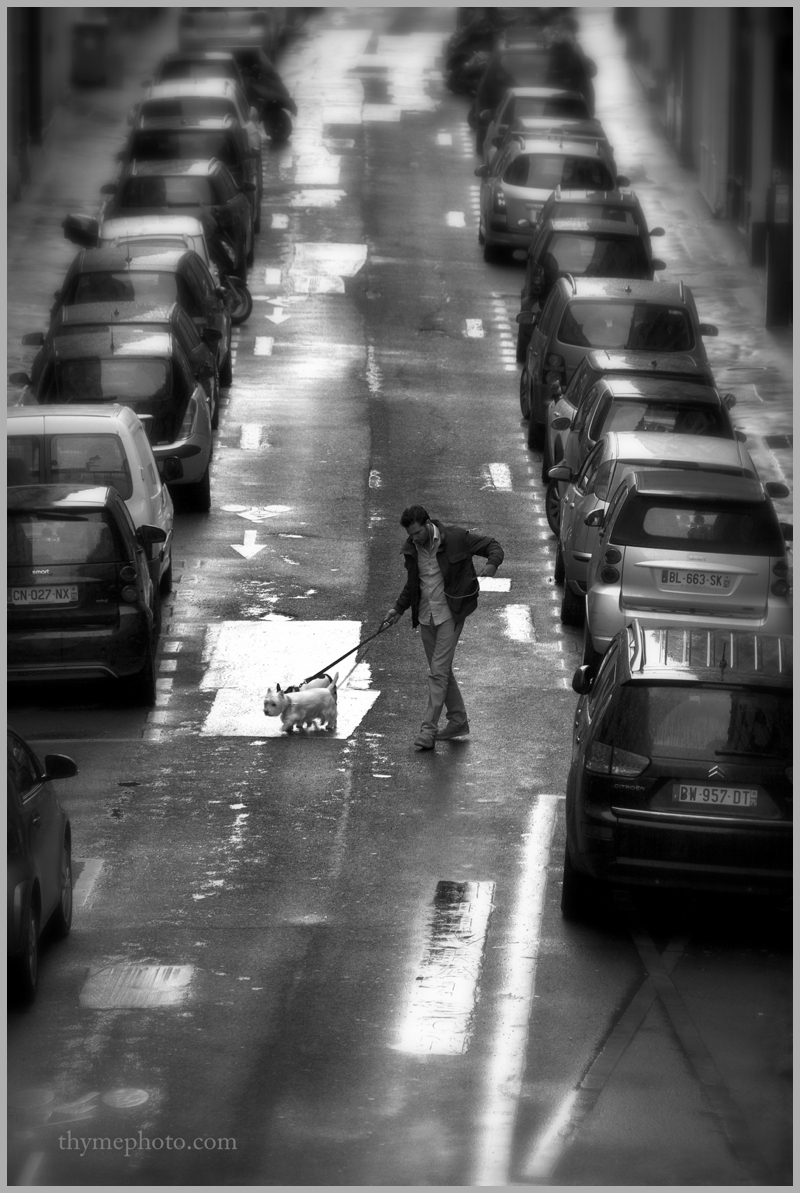 And when the streets quieted once again, I felt so completely privileged to still be at my perch, absorbing this day of beautiful and elegant Paris coming to slow and crooning end.  I had no interest in being among the hustle and bustle...only witnessing the events rolling on below.

The little french children were safely tucked in bed.  The huge balloons announcing the art walk gently bounced in the night's breeze.  One or two dogs were getting an extra late night walk as their owner's shuffled down the street.

And then the sky seemed to say to me, "There is more still, Sarah".  Look at this beautiful bouquet of clouds that I am going to send over you.".  This is my farewell portrait for you.  Remember it always.  Because I am one of the most unique cities in the world and am so thankful to be appreciated by francophiles like you. Enjoy. Bonne nuit, Sarah"