Building Castles in the Sky and dodging fox in the lanes...


“If you have built castles in the sky
Let not your dreams go to waste;
Just build the foundations under them."

When immersed in the Loire Valley of France, these words by Thoreau certainly bring new meaning to his quote .  A leisurely 2 hour drive south of Paris, this castle studded valley demonstrates that during the 18th and 19th centuries, the words of Thoreau would have been undaunting to the aristocrats and architects of these amazing time periods.

Riley and I were unprepared for the enormity, unspoiled beauty and remoteness of the castles of the Loire Valley.  We spent the month of May meandering tiny country roads, thinking we were lost, only to turn one bend or another and come upon huge stone castles, built years ago to offer the city-fatigued aristocrats of Paris...over-the-top countryside escapes. 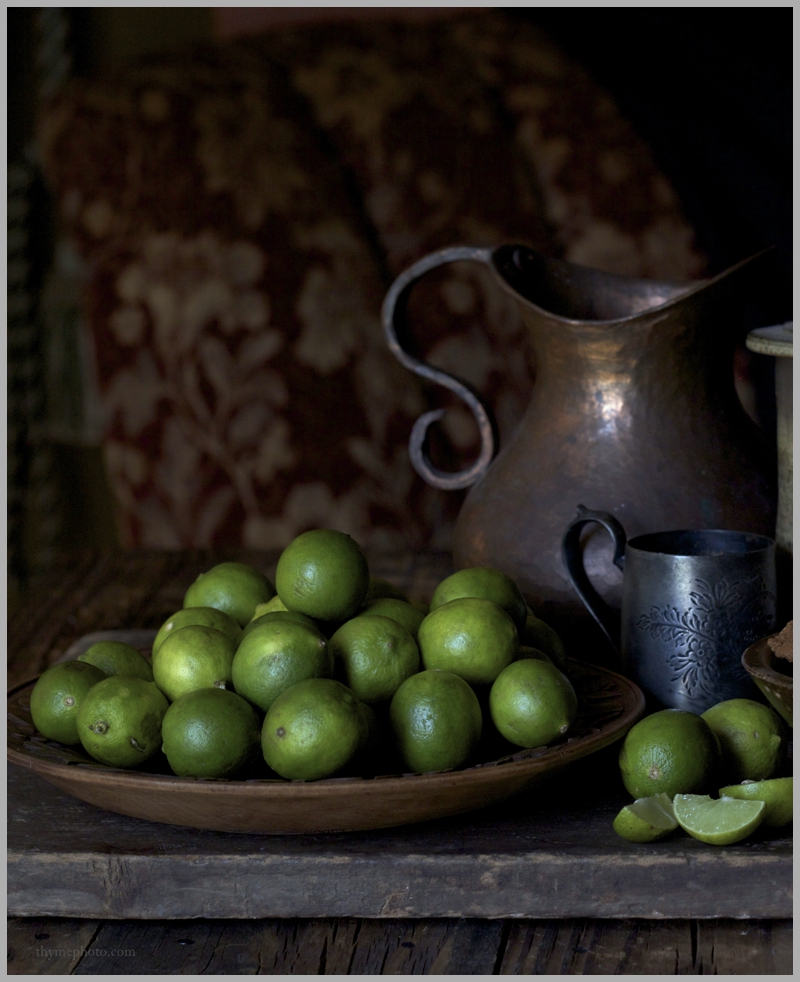 My son was a "castle kid" when he was little.  Whereas some children gravitate to sci-fi toys and movies like Star Wars or Star Trek, my son was building trebuchets, collecting stone weapons, learning about dragon lore, and reading the stories of Robin Hood. 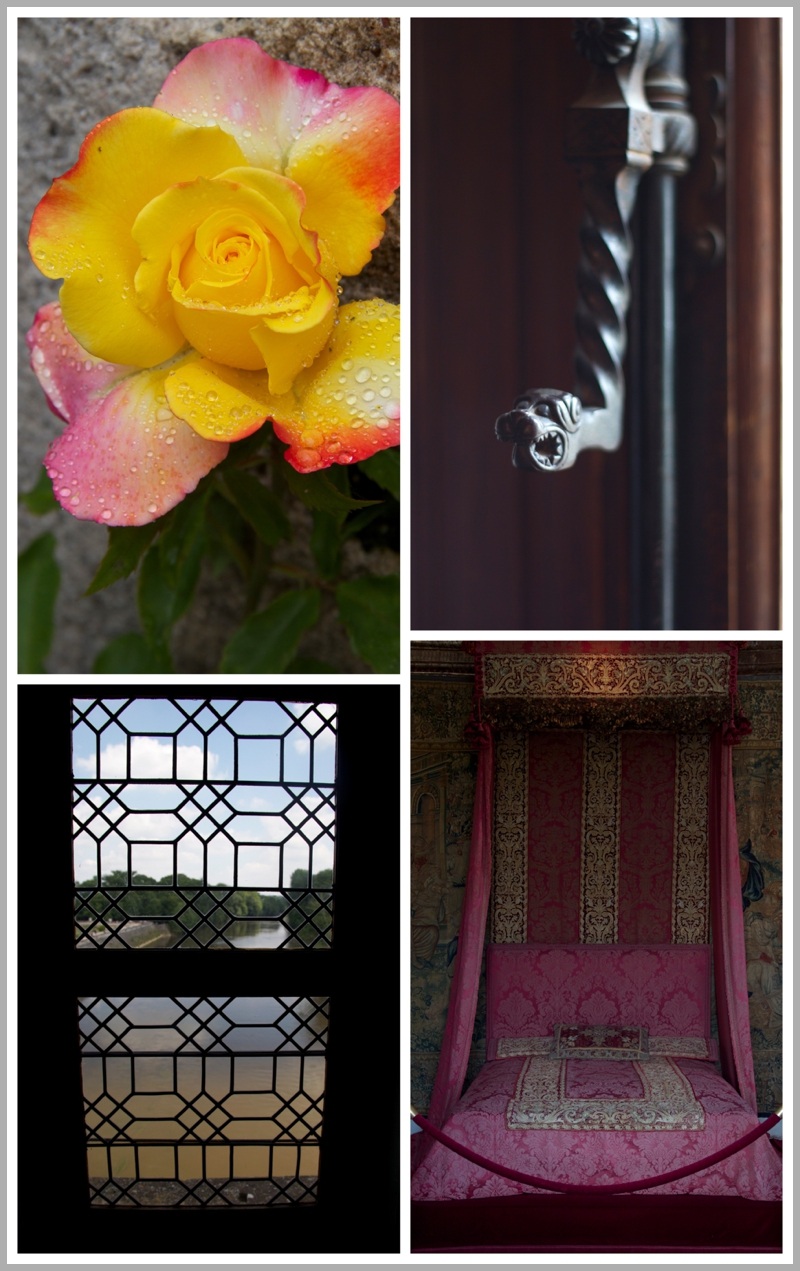 We had Lego villages and Playmobil castles complete with moats, drawbridges, and hidden treasures of gemstones.  When he was very young, we had the opportunity to live in Wales for awhile.  During the weekdays and weekends, we roamed from castle to castle.

The children scrambled over  massive stone remnants with no idea that these were the foundations of castles built in the sky centuries ago.  So many of them were crumbling right in the middle of green pastures as grazing sheep looked on wondering what was all the fuss.  Perhaps that youthful venture prompted Riley's fascination with the medieval time period. 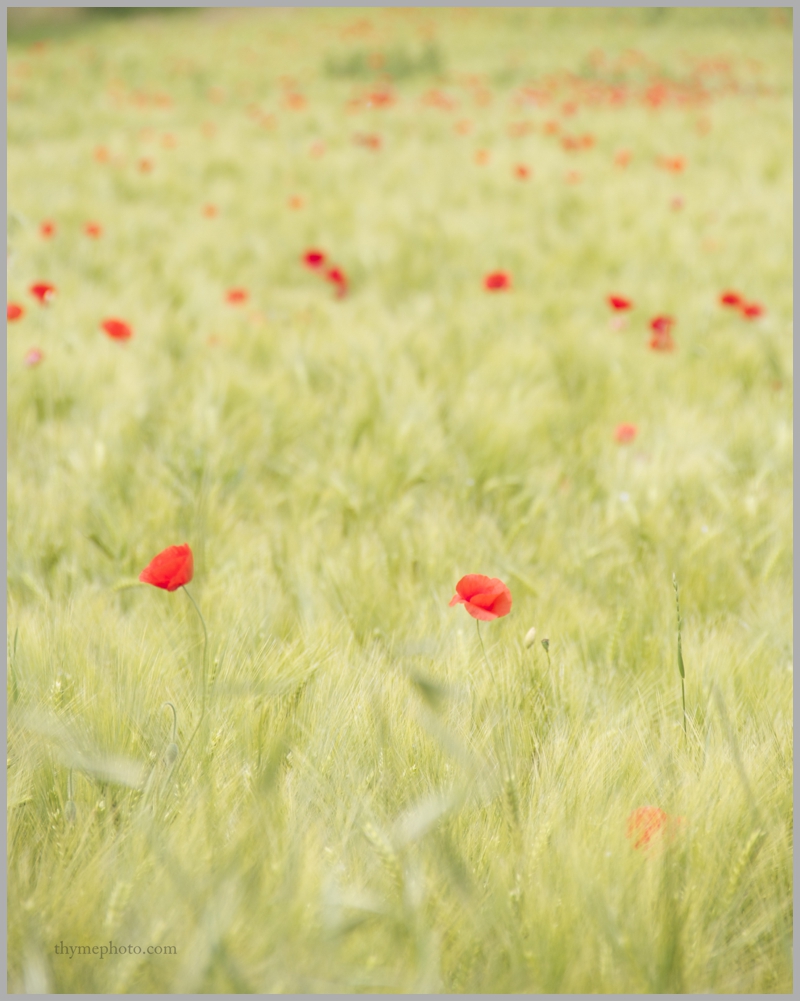 Of course, these days, as a sometimes surly teenager, he wouldn't readily admit to any of my childhood descriptions of his boyhood interests.  Truth be told, however, he used to always have some motley collection of stones in his tiny pockets.  These little worthless stones were his beloved "treasures" to be squirreled away in make shift chests and hidden drawers in his room.  Interestingly, the pursuit actually evolved into a hobby of gemstone collecting over the years.  Today, he particularly enjoys the lore surrounding how they were used in ancient time periods of many ancient civilizations. 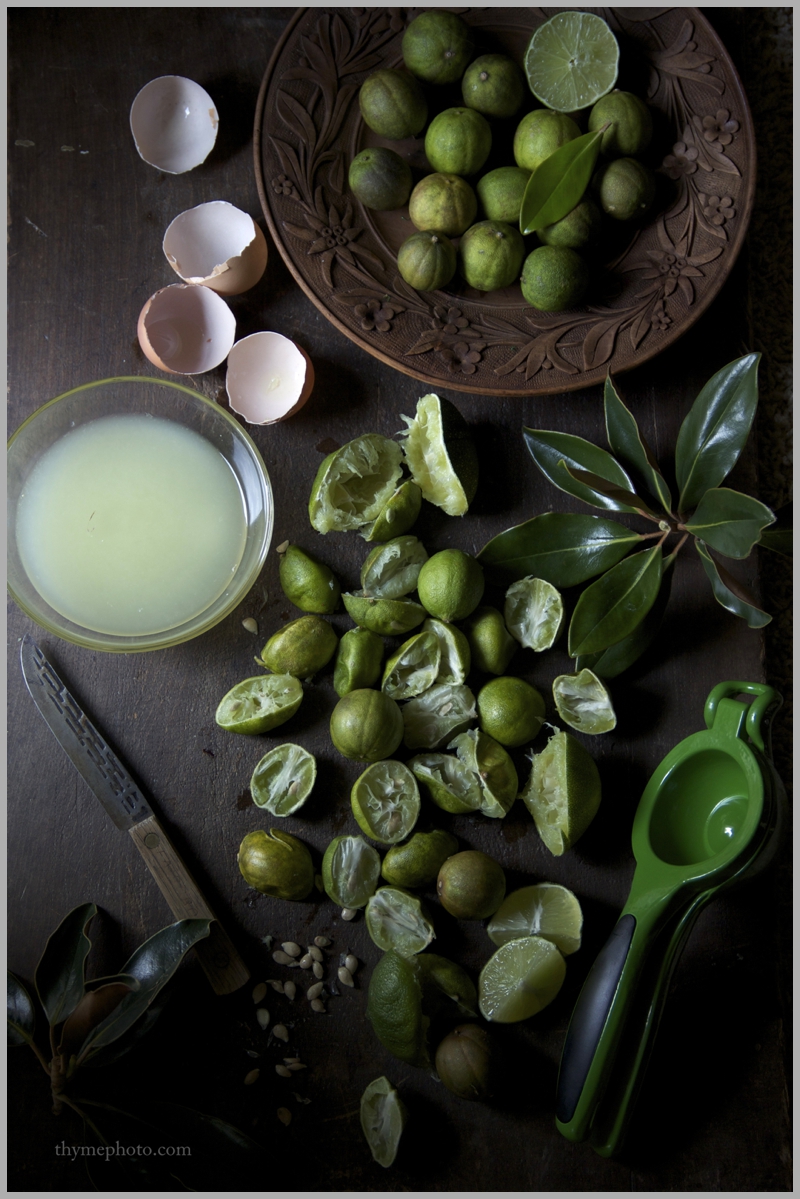 So as we roamed from castle to castle this past summer in the valleys of the Loire River, I knew to leave him to his own devices.  No teen likes to follow along with his mother like a little puppy. So I rented audio tours with headphones for the two of us.  We waved goodbye to each other and took off along the castle interiors to escape into a world, that for me was filled with dark and moody kitchens, softly lit rustic table settings, and heavy solid furniture covered in tapestries and leathers sitting in shadowed corners under slivers of soft light. 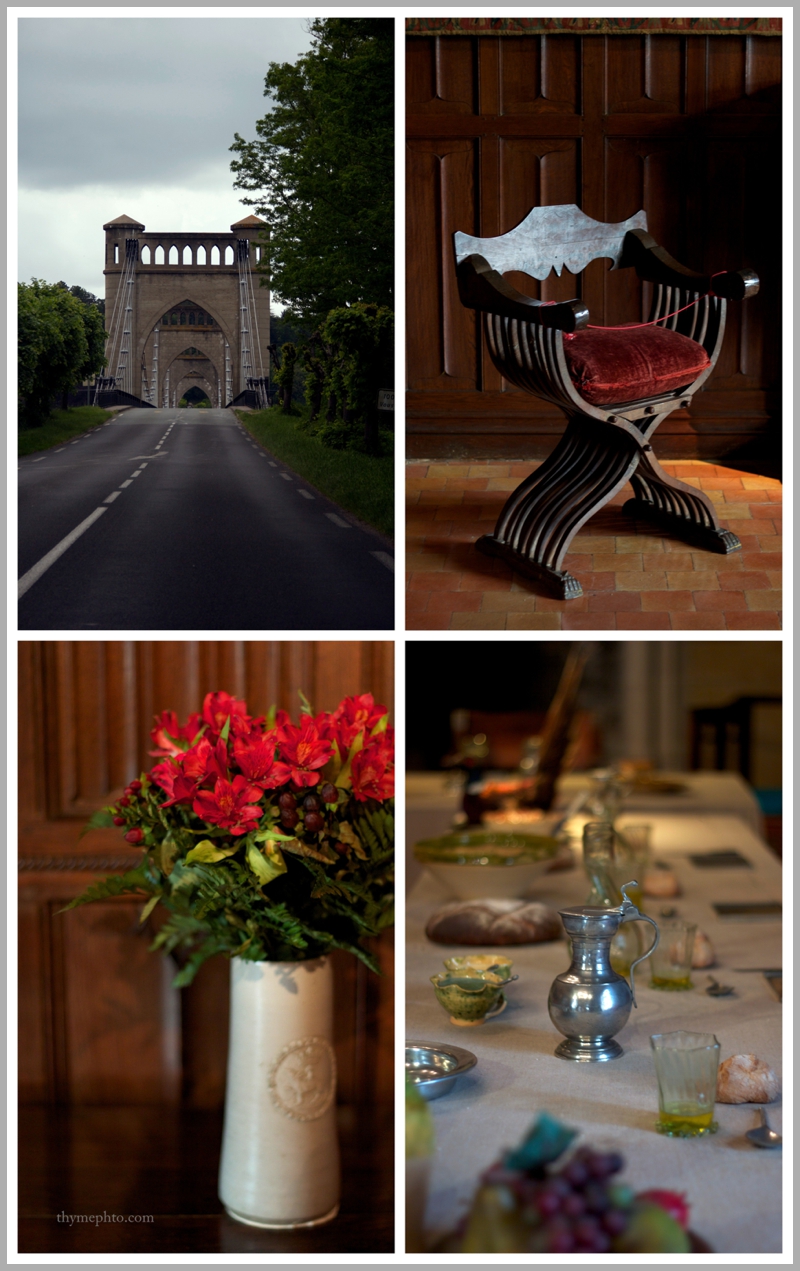 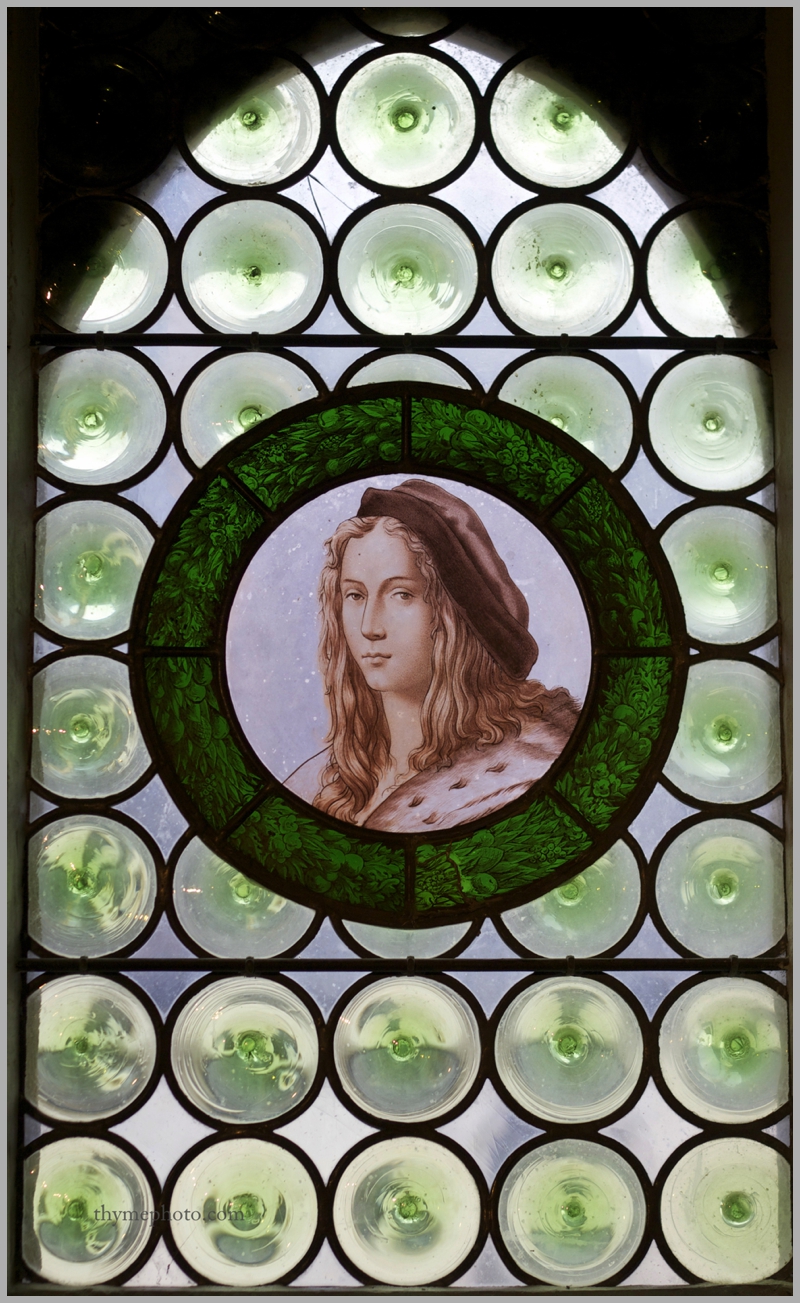 I really preferred some of the castles we toured that were more "off the beaten path".  These castles were less popular than those more sought after by tourists wanting to see more opulence and grandeur.

I quickly realized that the castles built during the 14th and 15th centuries held more appeal to me than those of the 18th and 19th centuries. 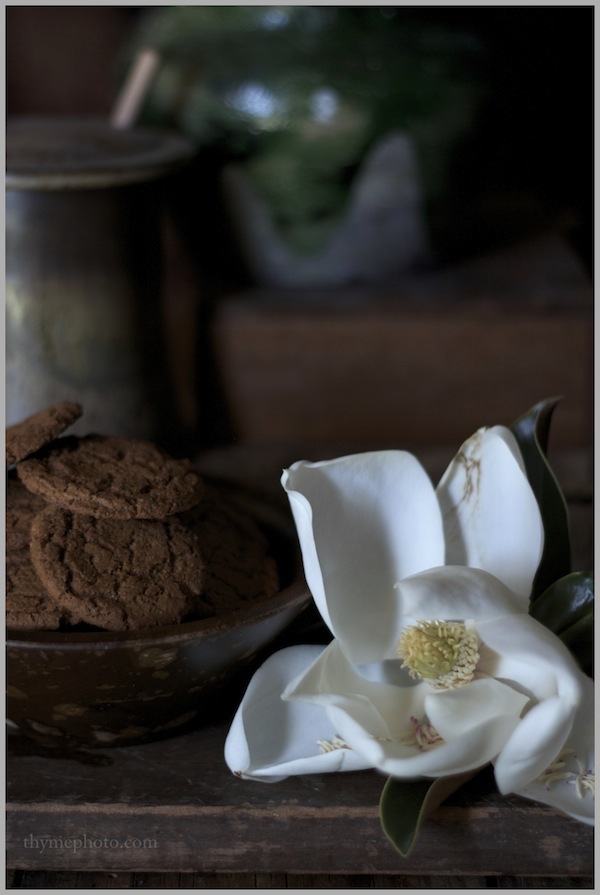 Two of my favorites were the Chateau de Montrésor and the Chateau de Montpoupon.  These were more remote castles. They were situated in parts of the valley that were quiet and  unassuming.  There were no grand build up of signs leading to the castles and stimulating the visitor as to the impending awesomeness will appear in a few minutes. 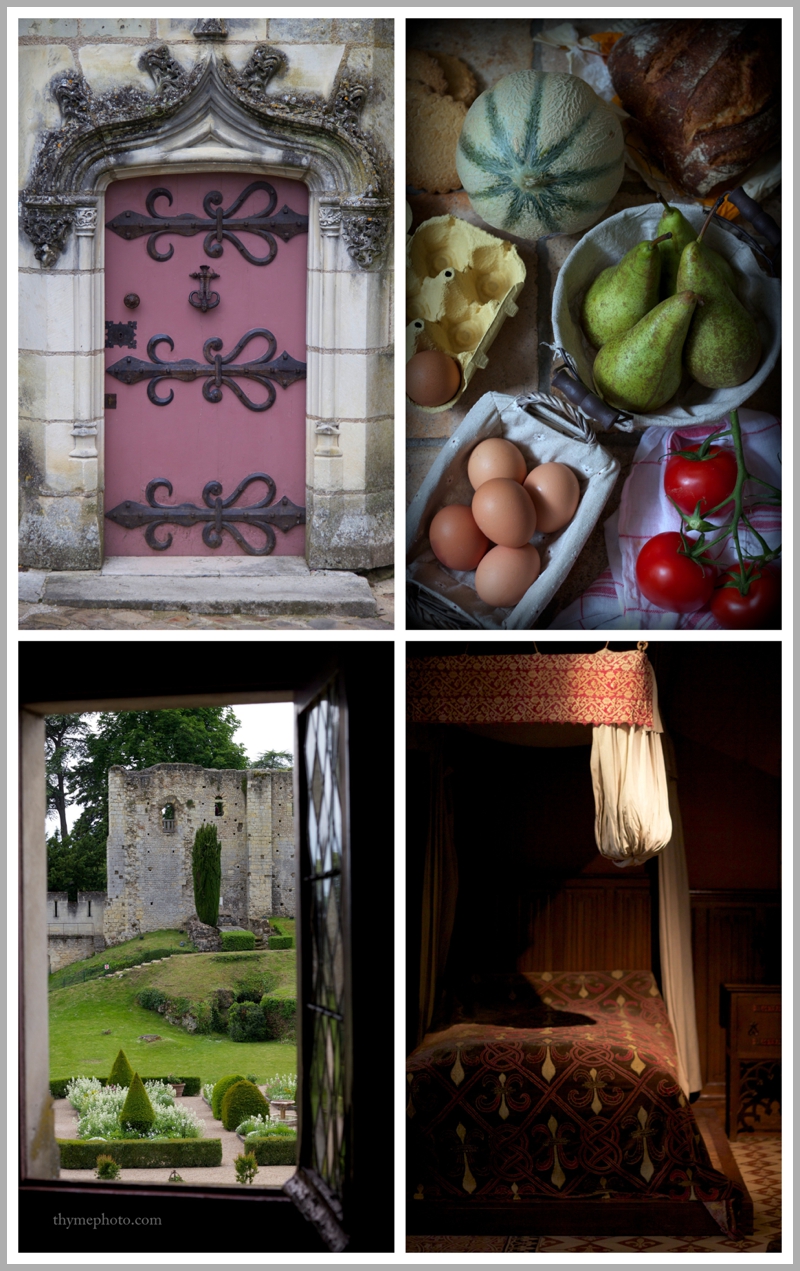 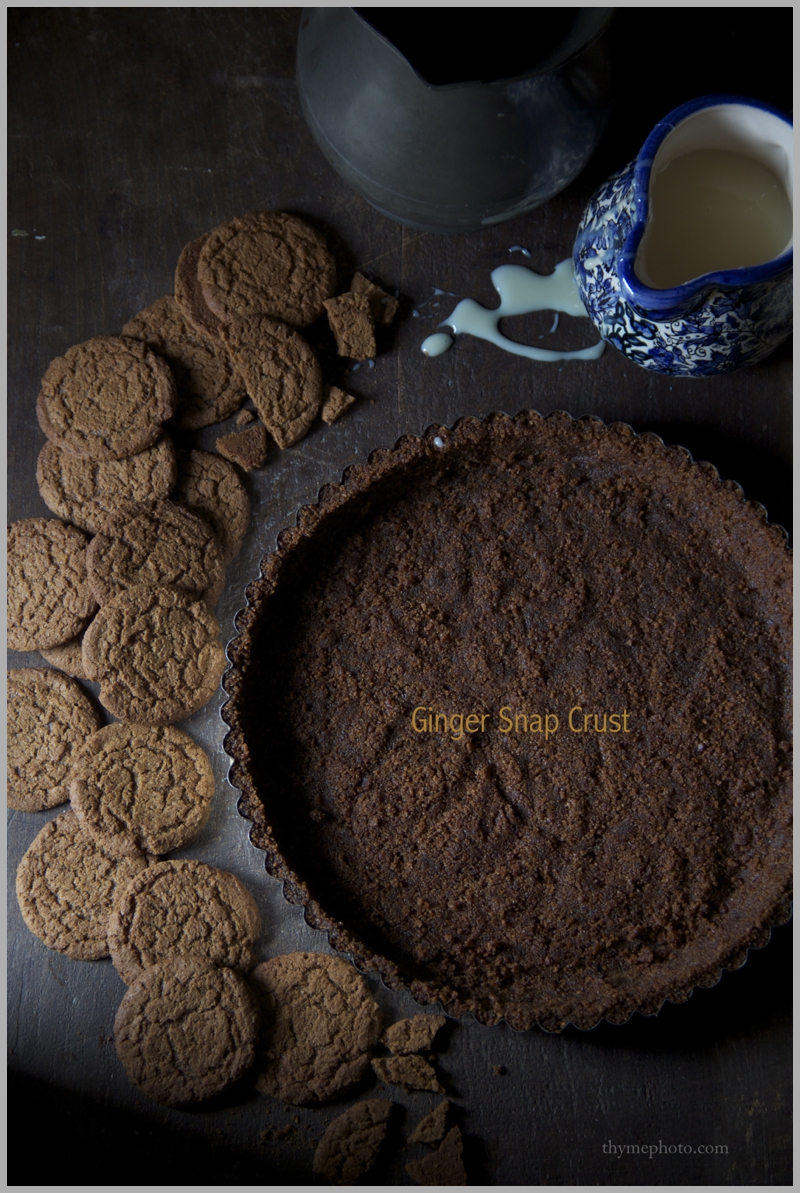 Rather, we simply stumbled onto these two landmarks, vestiges of a time period that for my son and myself hold such intrigues and mysteries of captivating eras of history.

I stood alone in the one of the grand kitchens with images of baking breads and roasting meats playing in my mind's eye.  How would they keep everything fresh?  How would they prepare the game meats without all of the modern appliances we have today? 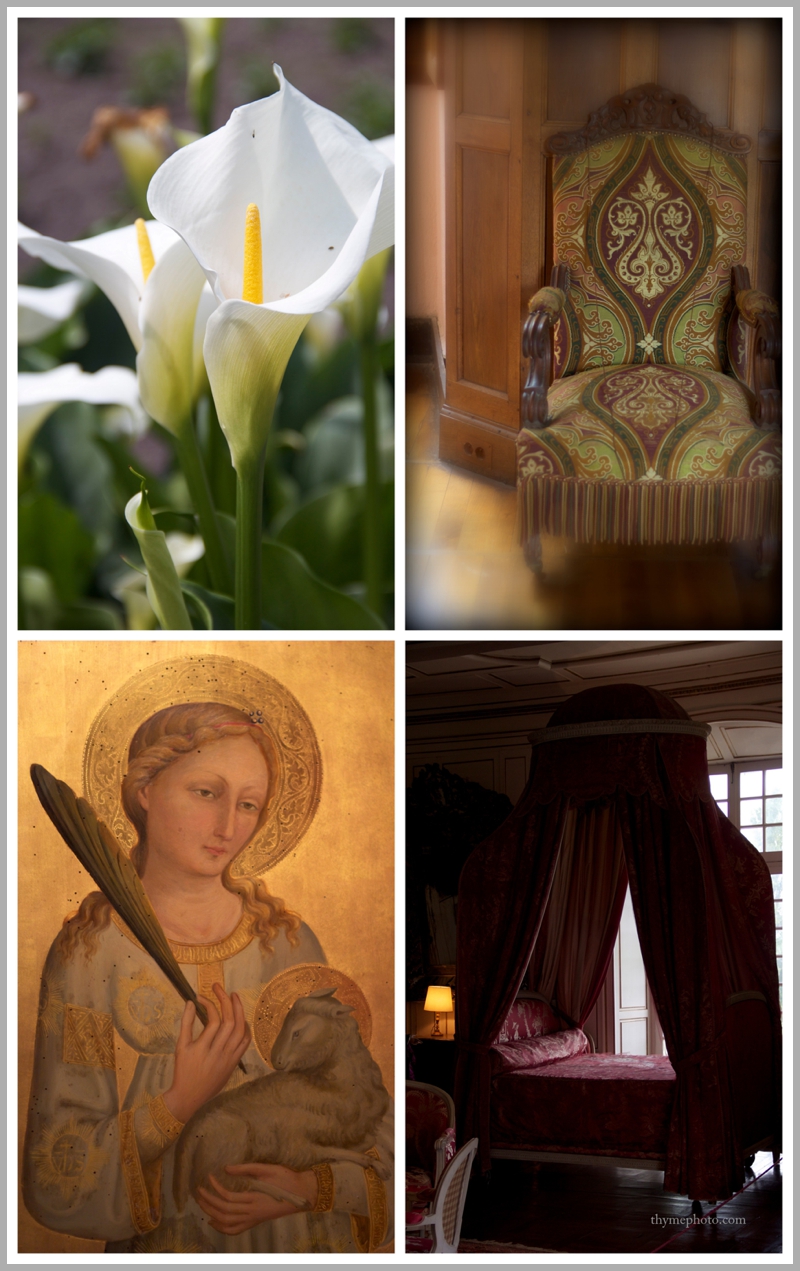 My son was carefully studying the drawbridges that loomed over the long dried up moats.  I imagined he was wondering how difficult it was to protect the castles from attacks.  As we cautiously ascended narrow stone staircases, the mood  seemed so still and lonely.  We imagined spending long winter months in the brooding and nebulous rooms with the mighty fireplaces crackling and popping from logs hauled in from the nearby forests. Every day foraging and hunting must have been so vital to those who managed these massive hulking country chateaus.  Many of the rooms were filled with stuffed and mounted animals hauled home from the successful hunting expeditions through the countryside in order to ensure game for the castle feasts.

What a thrill it must have been to take down a wild boar, or turkeys, or deer in order to successfully bring home need protein for stews and roasts.  It must have been such a right of passage for young hunters trying to make their first impressions of success. 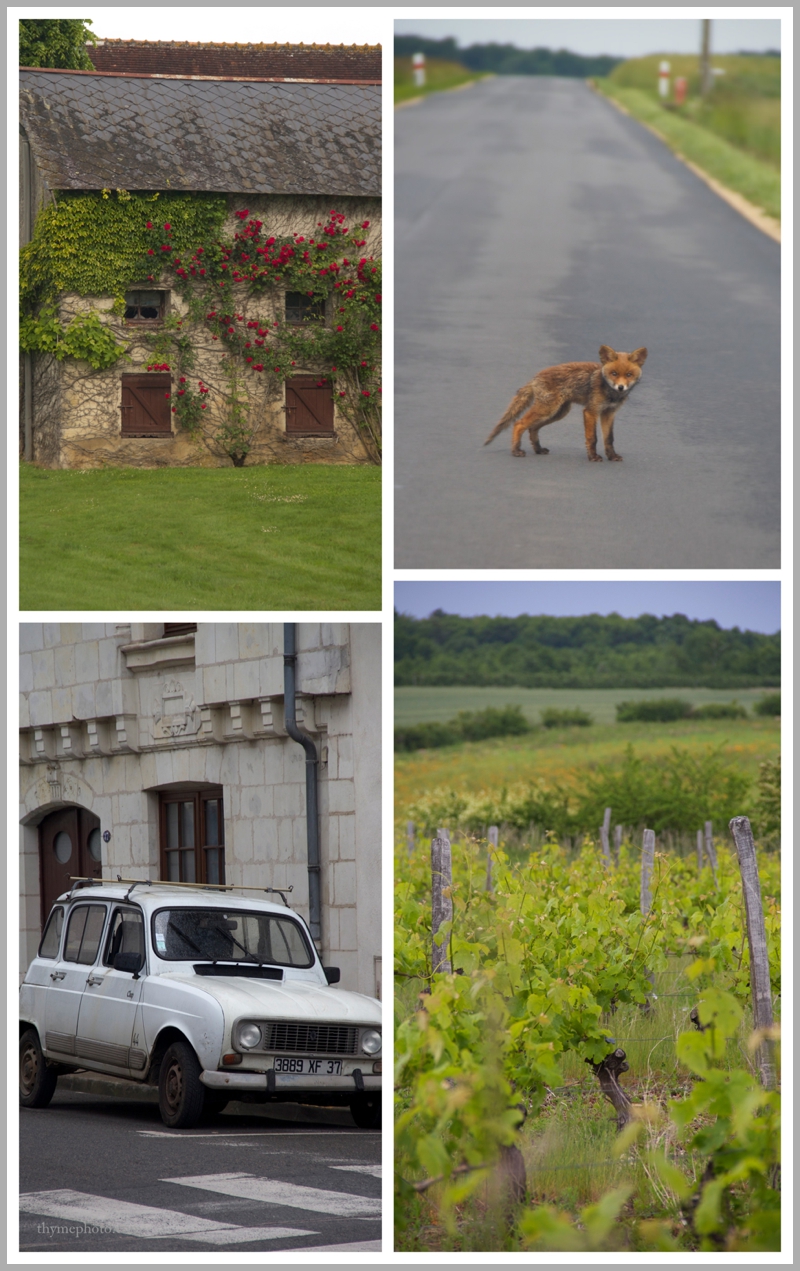 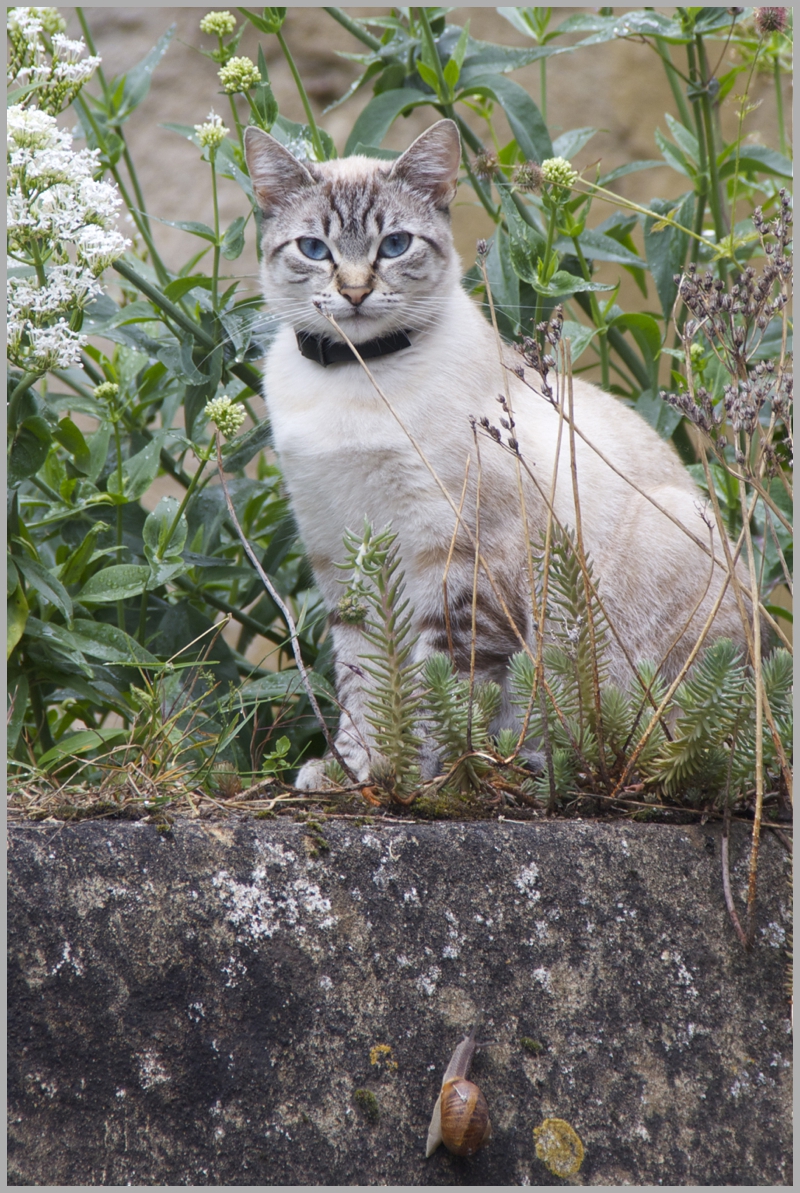 I imagined sweets were rare during these medieval times.  Fruits and berries probably offered the only sweetness in recipes...honey from bees would have been such a jolting sweet treat.

As I sliced handfuls of tiny key limes for my Key Lime Pie and whipped the meringue with my modern appliances, I thought about the feat it would have been to deliver something like this dessert to one of those castle tables. 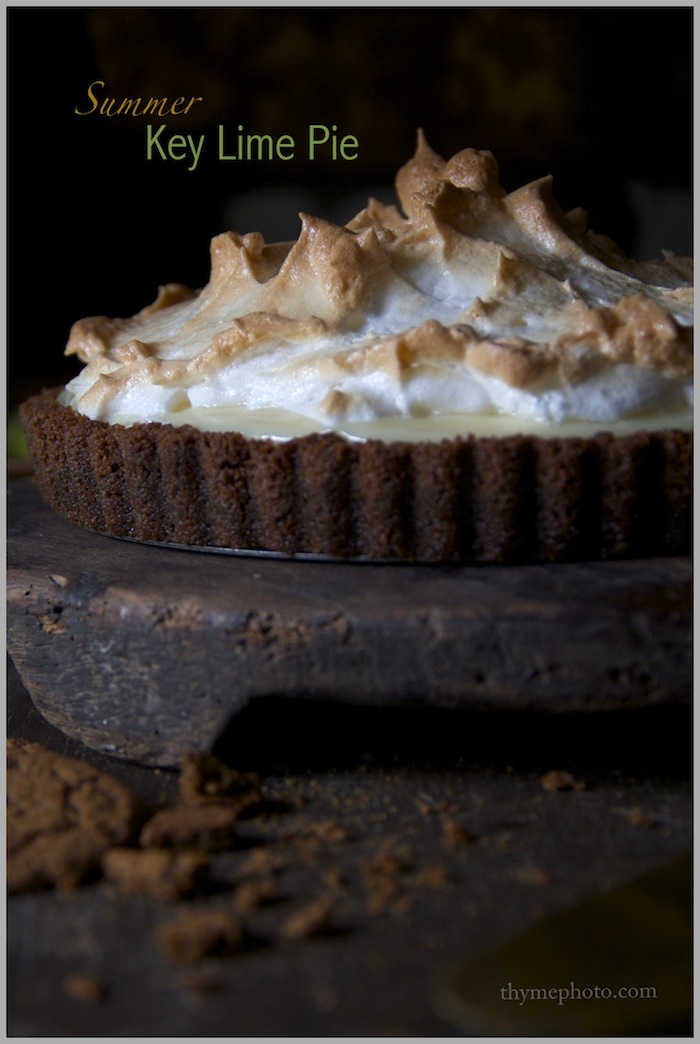 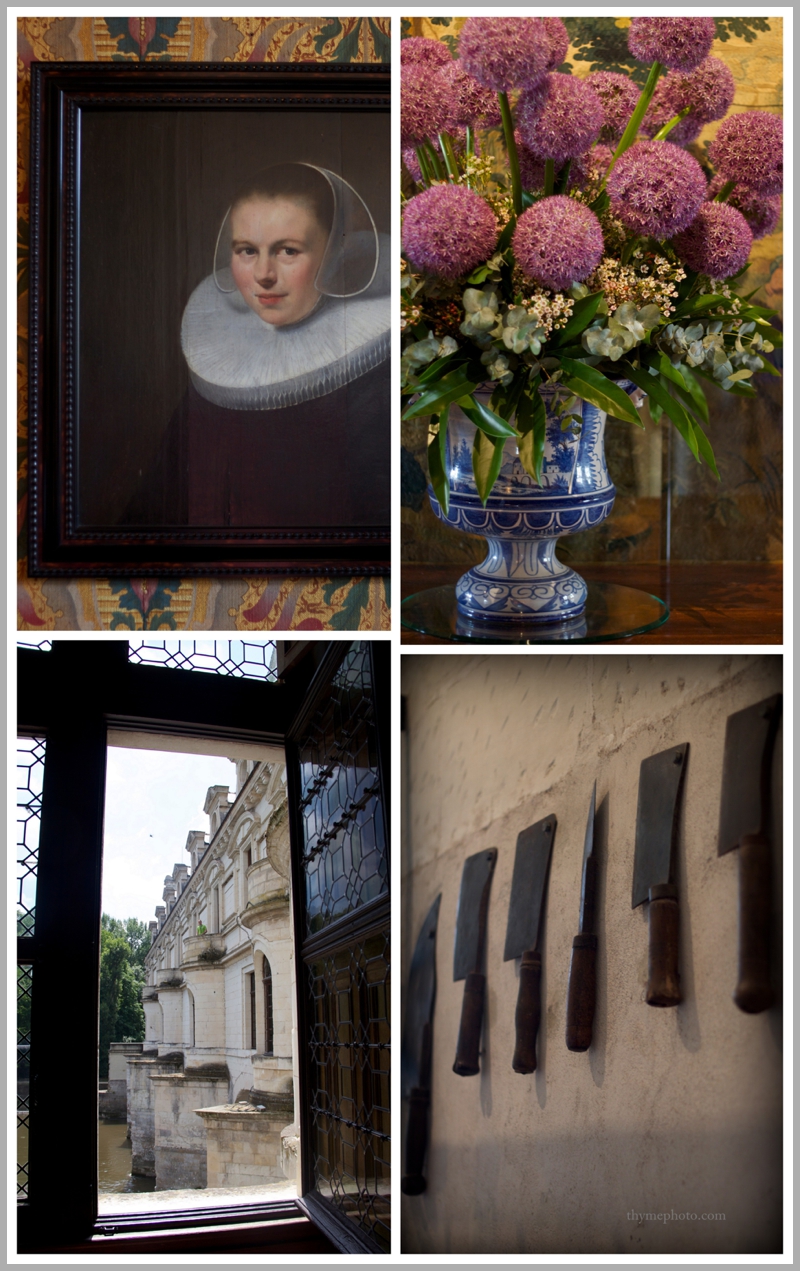 The cooks in the kitchen certainly would have milk from the cows.  Did they know about condensed milk during that time?  Was the evaporation of water from cow's milk something that was discovered by accident?  It would certainly have added richness to desserts back then but without sugar, was it used the way we use it to make such sweet desserts today?  Probably not.  Sugar certainly did revolutionize our palettes and menus. 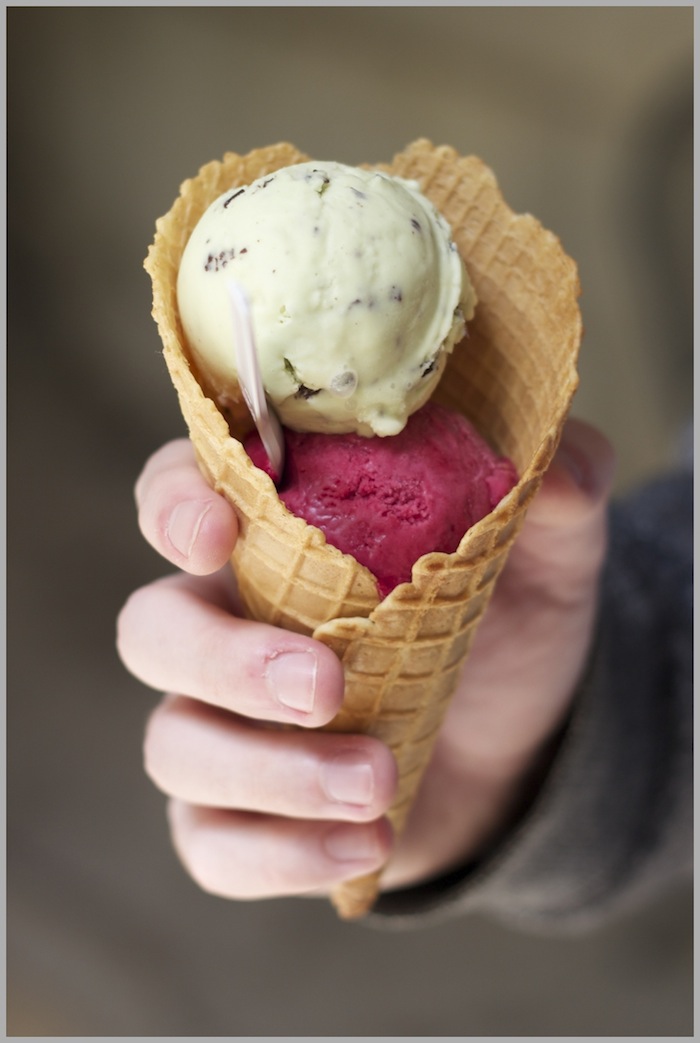 Speaking of sugar, Riley and I quickly learned to time our castle visits for mid-afternoons.  After getting lost in the voluminous rooms and ample grounds of each chateau, we were ready to sit down to relax and to process these surreal experiences.  Unsurprisingly, each chateau has cozy nooks with seating just for this purpose. Often ice cream, gelato, or hot crêpes, oozing with creamy nutella, are offered nearby.   Absorbing the scenery and relaxing in the shadows of castles was certainly enhanced by a sweet treat in hand. 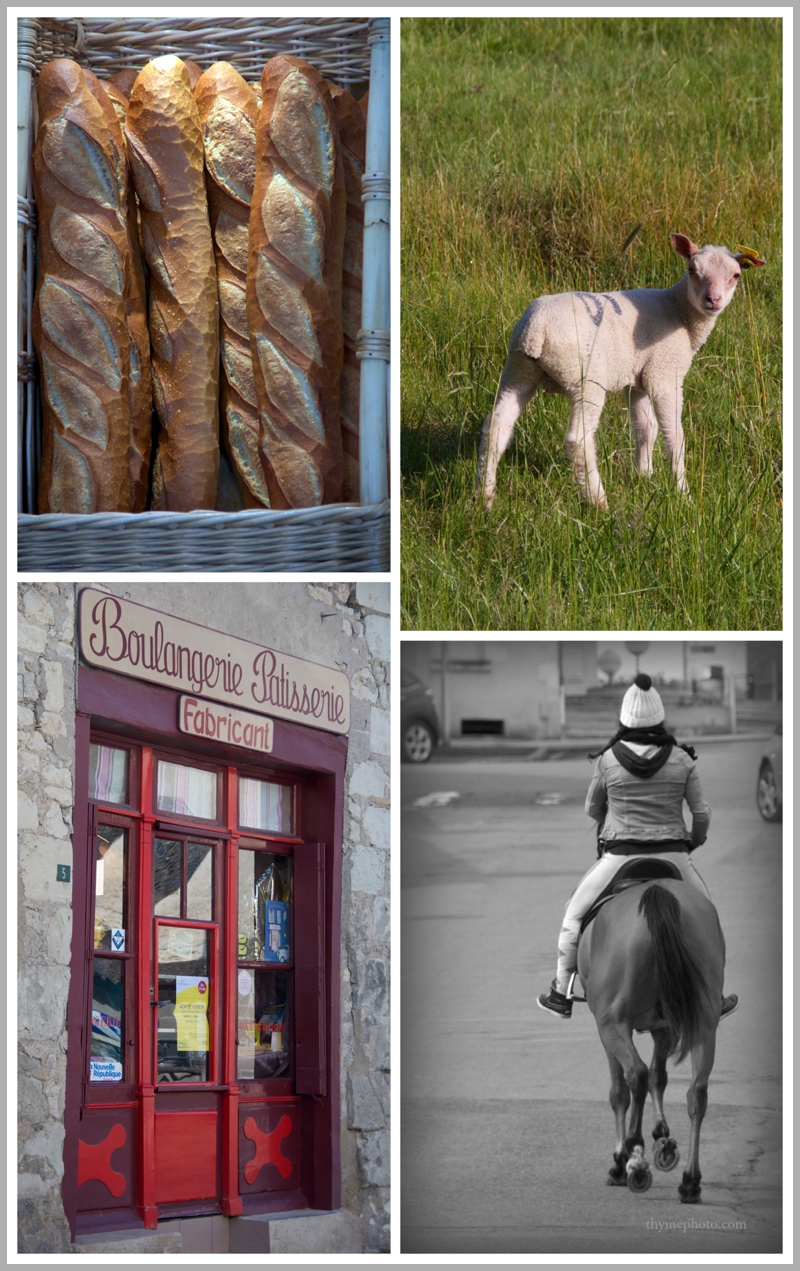 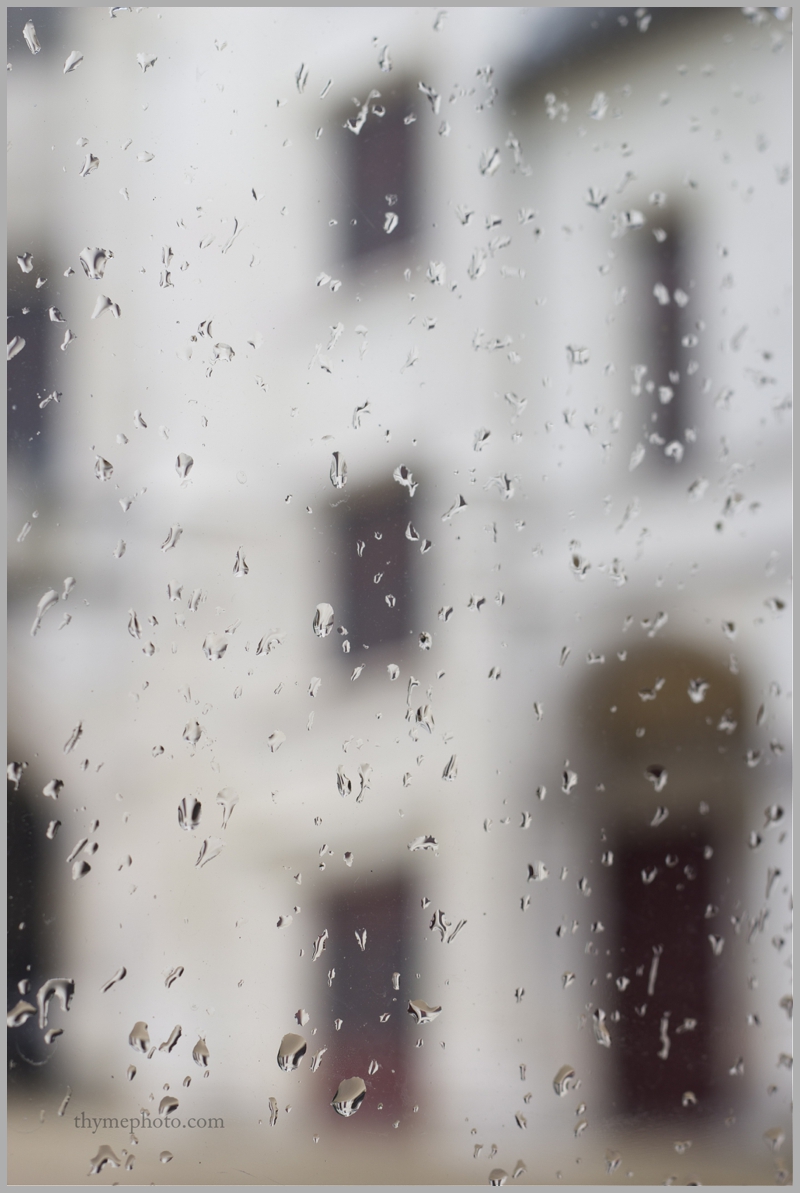 We would tumble along up and over the mellow quiet valleys that were spread out in between each castle.  France is a very quiet country in the month of May.  The air was still cool in the mornings and evenings.  Often a rain shower would break up the day.

On one castle tour, it started to storm outside.  There is nothing so delicious as a May storm raining down on the windows while meandering spooky and quiet castle rooms.  Riley and I both love the rain.  The castle tour through the Chateau Chaumont-sur-Loire was a memorable one because of the storm adding to the ambiance of the experience. 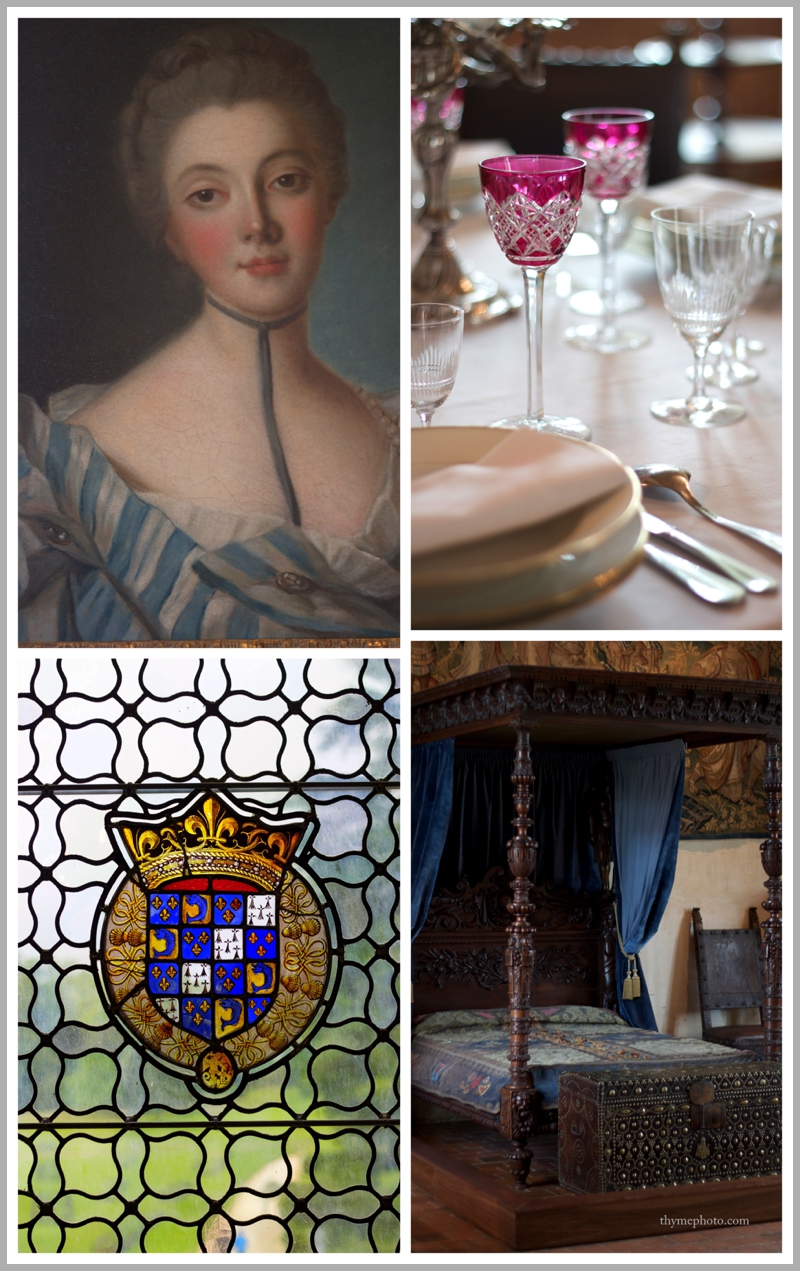 Dark clouds started to tumble across the flat fields in the distance.  The darkness of the sky against the brilliance of the greens of the field only enhanced the grey stones of the castle.  We truly felt like we had left the 20th century for awhile. 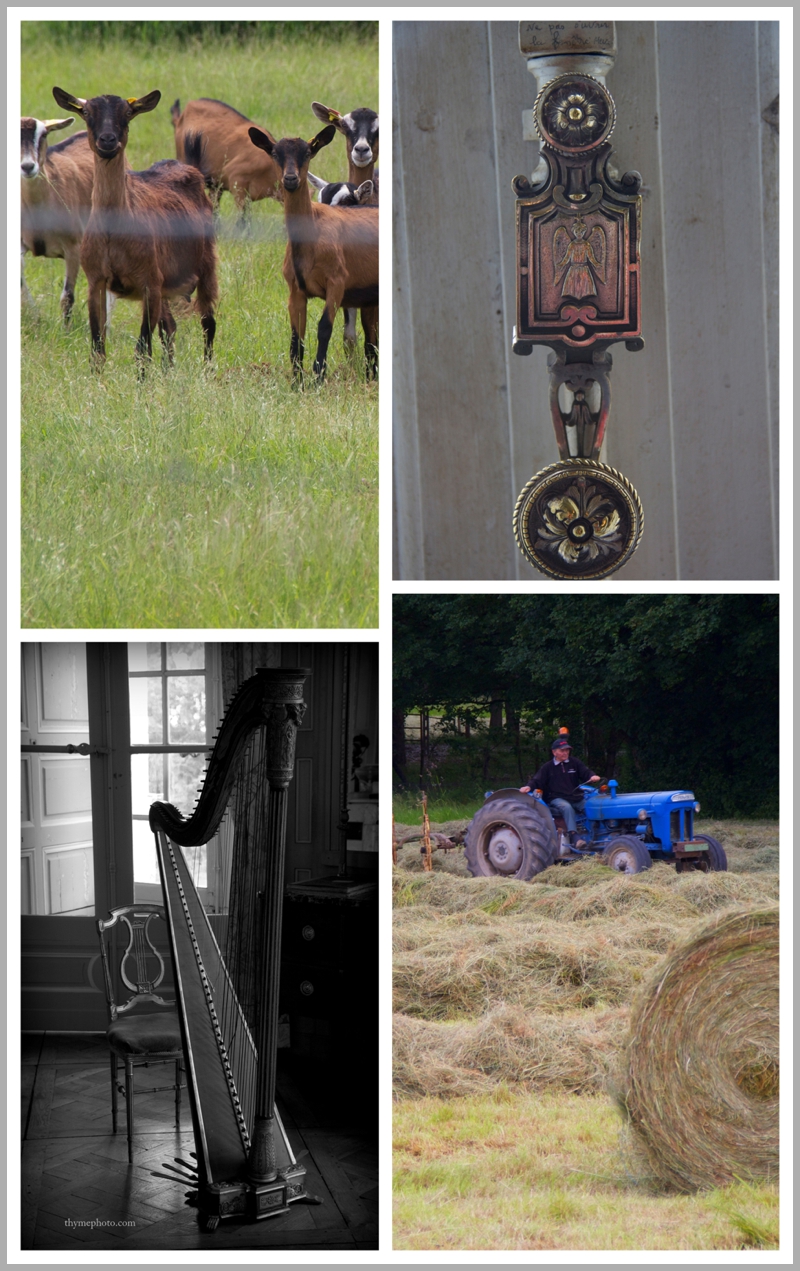 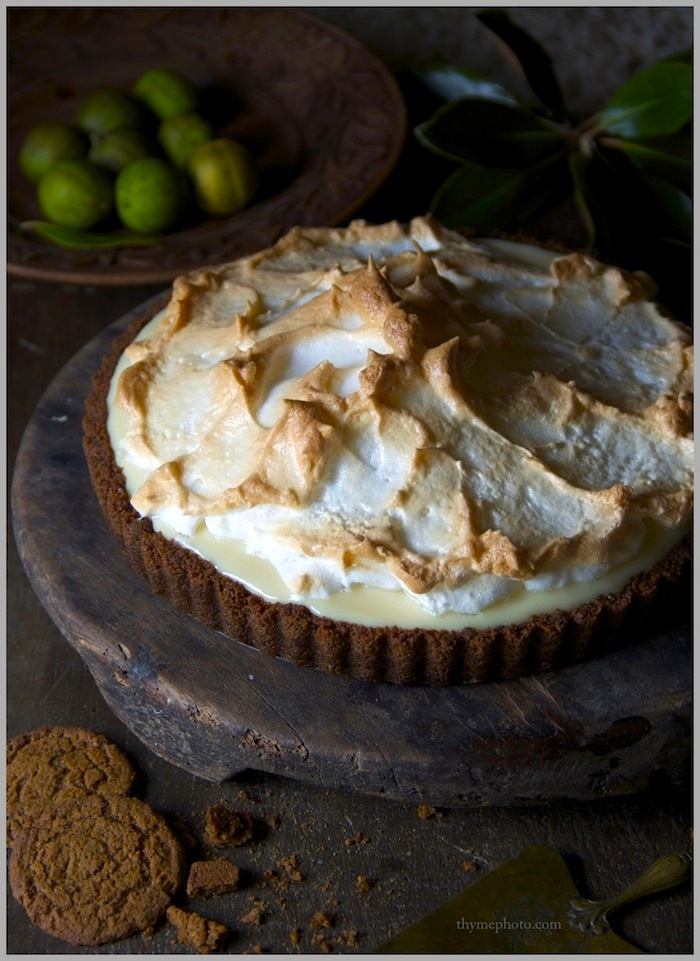 In between going in and out of castle life on the many tours we took during the month, glimpses of life in the french countryside of today offered scenes that might not be much different from the countryside of long ago. 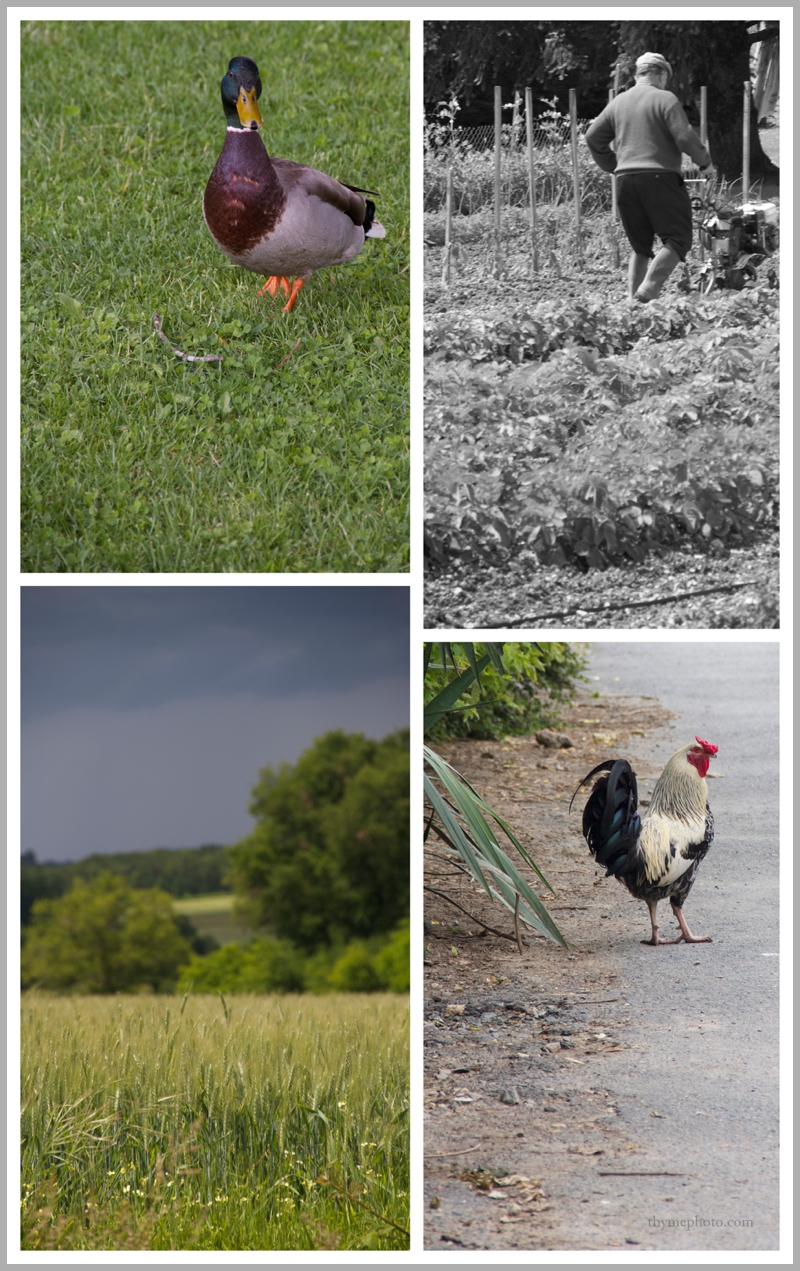 Many families were outside tending to their gardens.  The winter wasn't that far behind and sprucing and cleaning of the gardens was in full swing.  Hay was being rolled into huge rounds and the fields were dotted with their chubby collections. 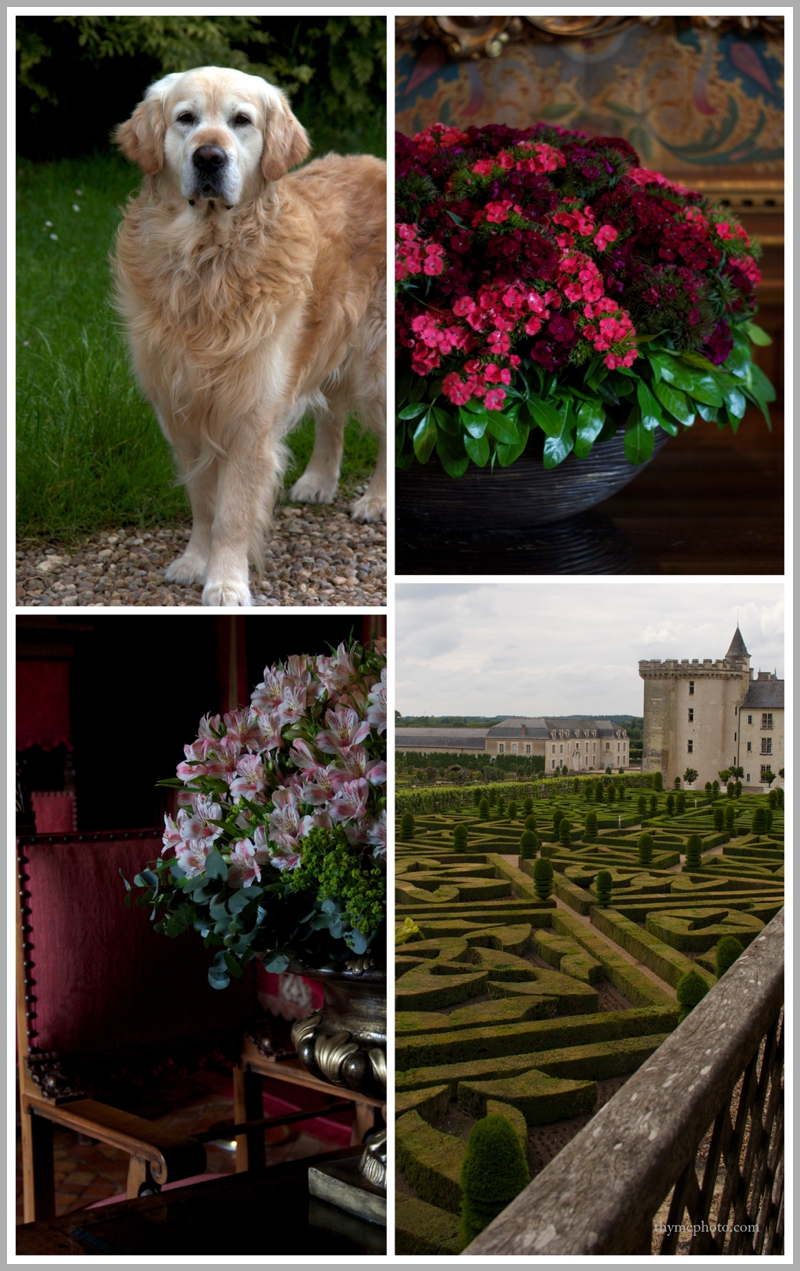 We stopped for a fox to cross the road.  Upon exiting a little Boulangerie with baguette sandwiches in tow, horse back riders sauntered through the village as if this were a perfectly normal everyday scene.  Signs advising drivers of the presence of boars crossing the roads were everywhere. 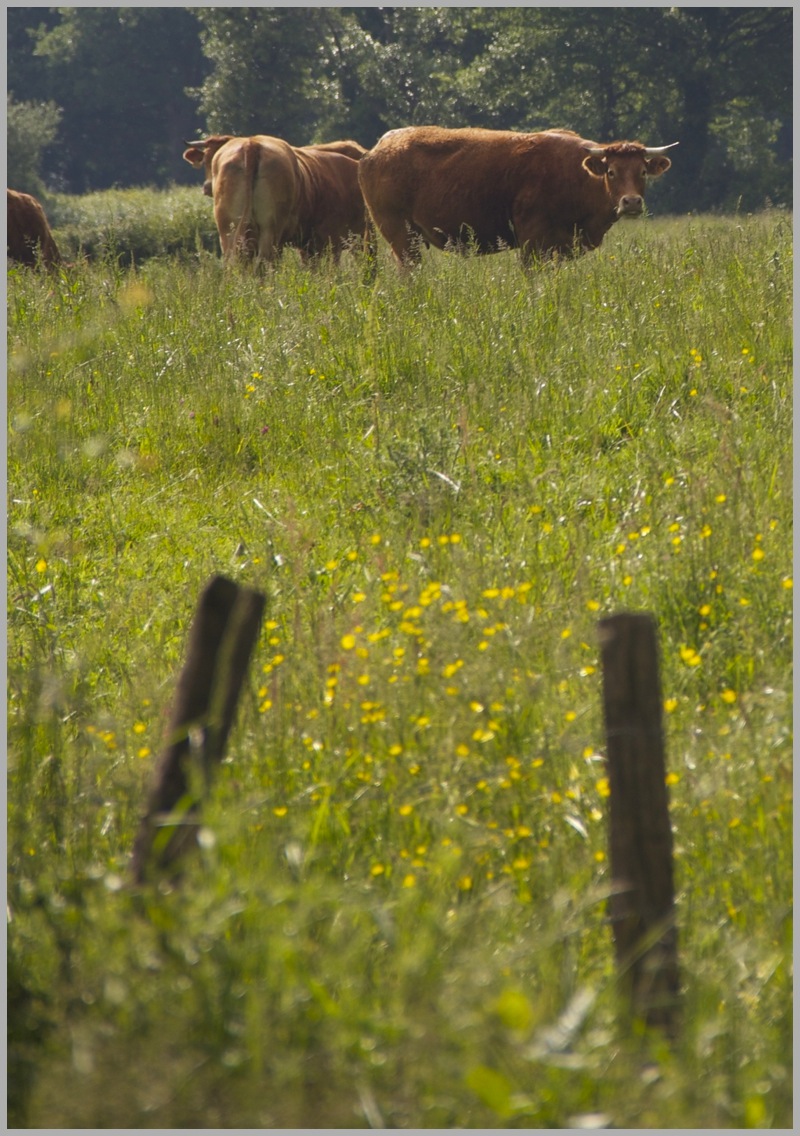 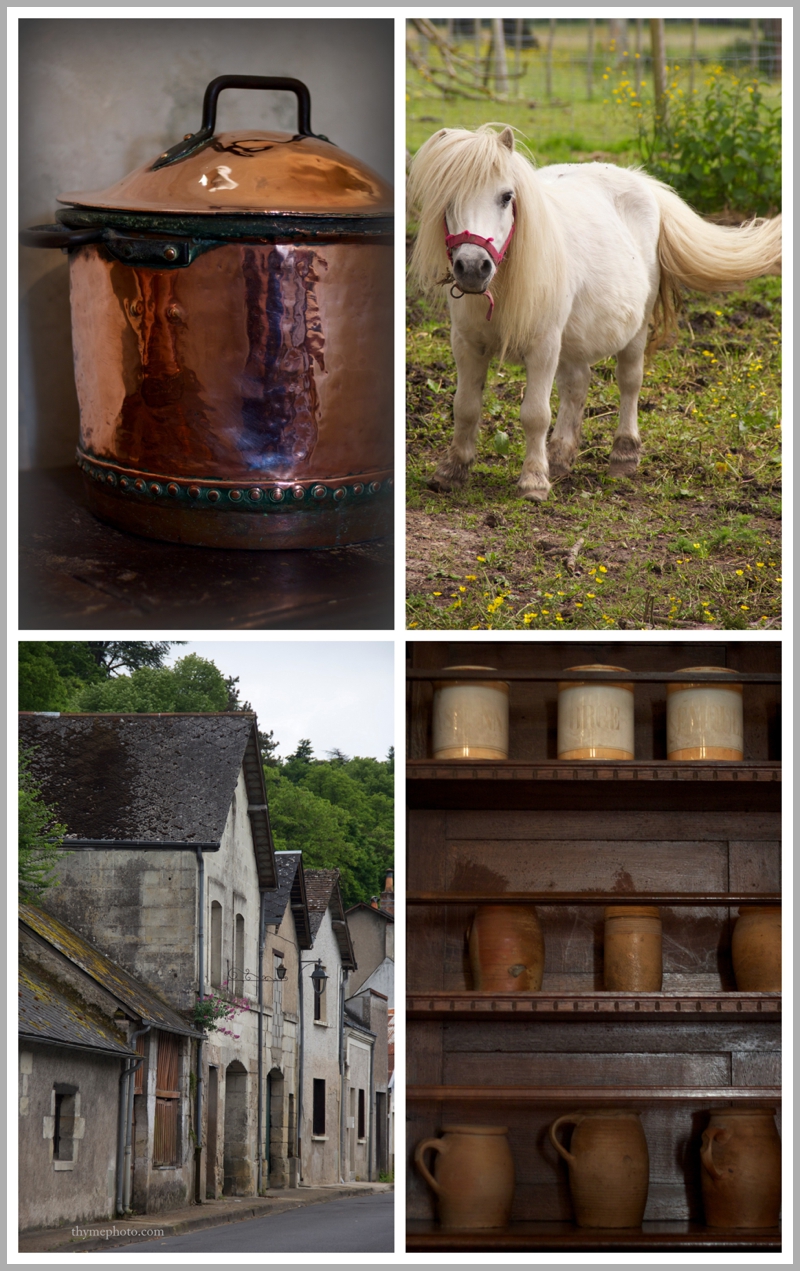 But, something in particular about modern day french countryside continues to connect the traveler to the olden days of castle life.  Many of the country homes still burn coal in iron stoves for warmth.  Spirals of smoke could be seen wisping out of rooftop chimneys early in the evenings.

We could smell the faint aroma of coal in the air as we cruised along the tiny country farm roads.  It wasn't a bad smell at all.  But a smell that certainly enhanced our visions of the romantic past of castles and ancient time periods. 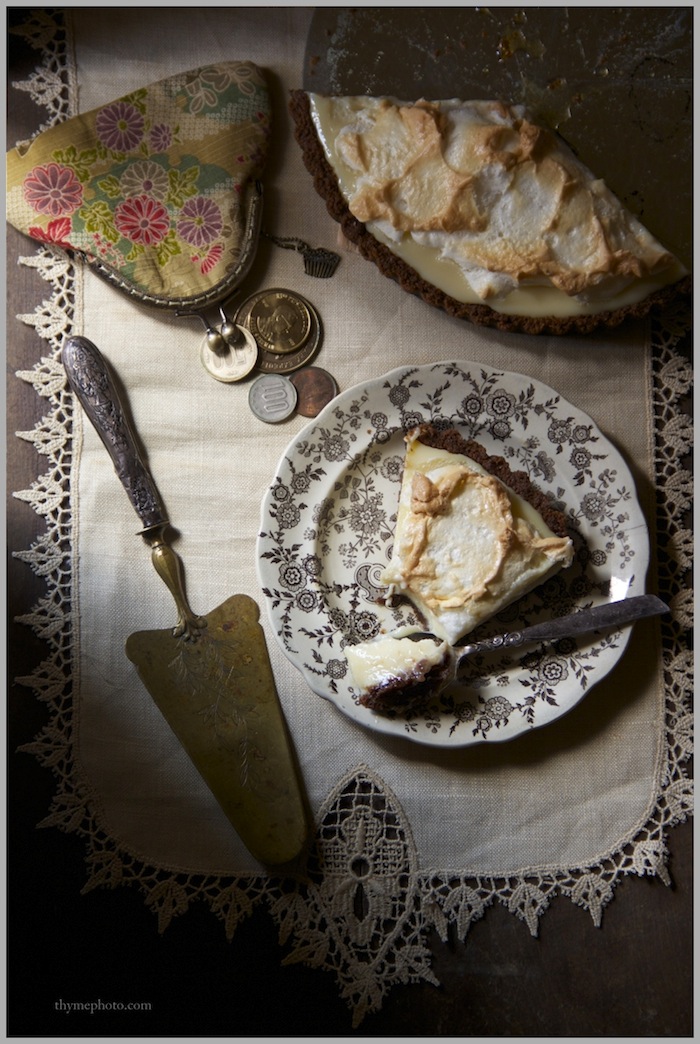 As I mixed and stirred the ingredients for my smooth and creamy Key Lime Pie, I couldn't help but think of the barely lit fruit and vegetable still life pantings from the Medieval time period.

I often like to keep the lights off in our home and only rely on natural light.  The deep velvety green of the key limes next to my  tawny copper colored pitcher with the leathery looking crusty ginger snap cookies reminded me of the colors that I remembered from the castle kitchens. 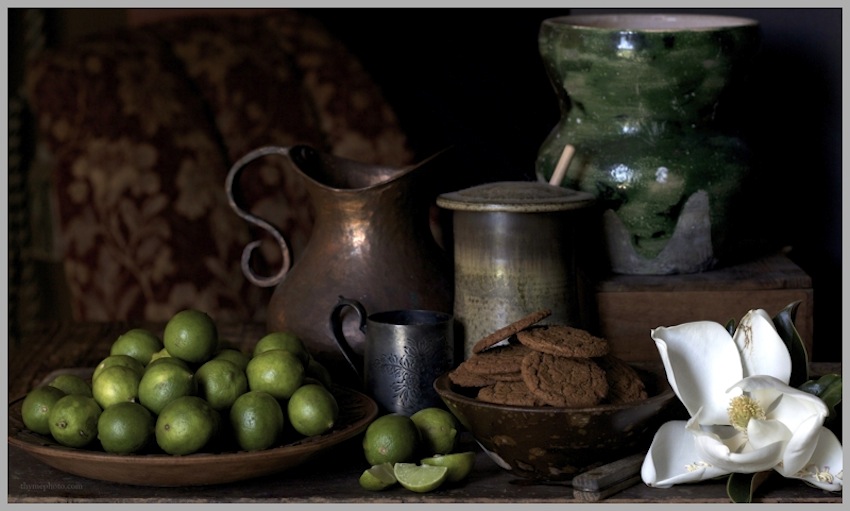 These colors change during the day as the sun skims over the house casting various shadows and sunbeams that alter the mood and light before me.  How grateful we are to have all of the modern gadgets and whirleygigs that making cooking a snap in this time period.  But, oh how fascinating it would be to peek into those bustling huge castle kitchens during the 1500's, then 1700's, then...


List of Castles visited in the Loire Valley of France: 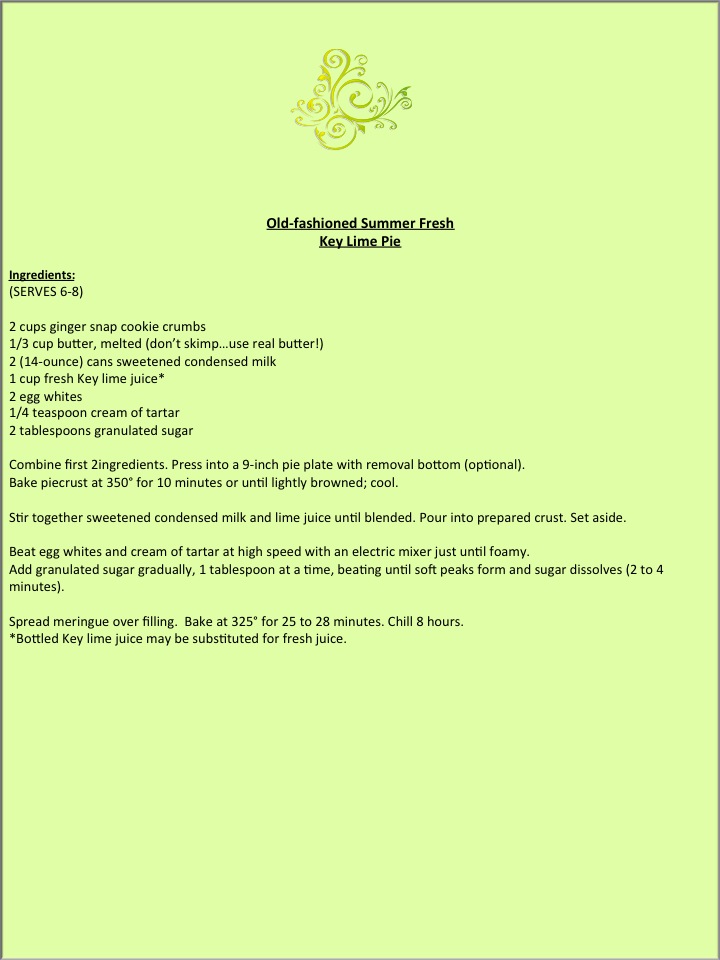