When Life hands you lemons, you go have a good cry...and then you go roast a delicious duck and stuff tortellini... 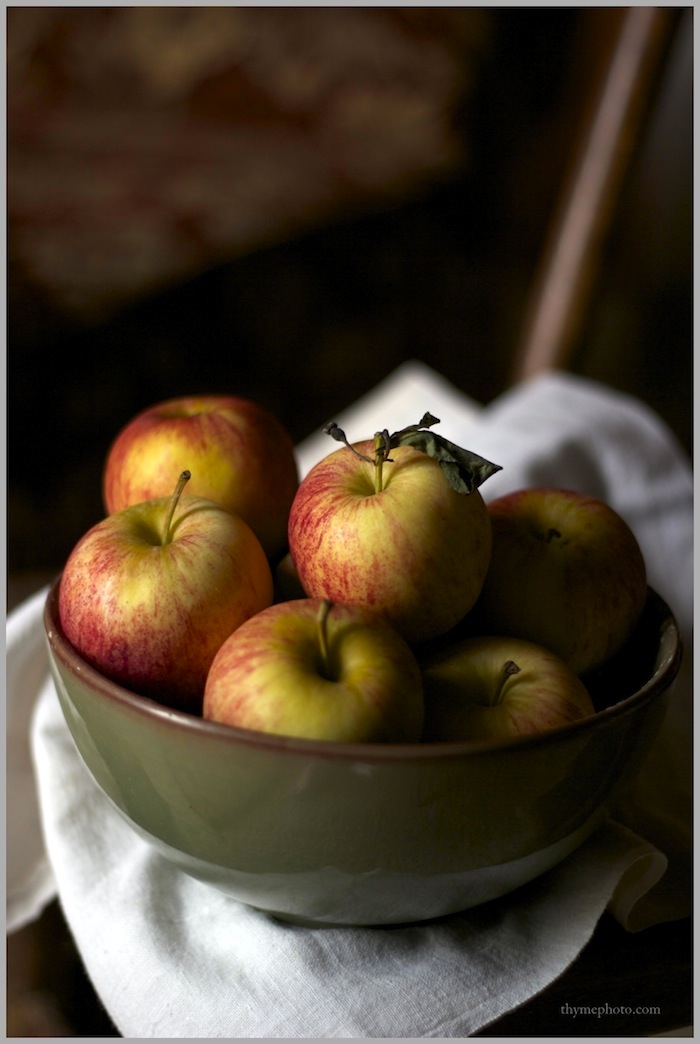 About a month ago, I traveled to New England to begin our search for a home out East.  I was pretty giddy with the anticipation of exploring such beautiful country, rolling up and down narrow windy roads, and peeking into one farm house after another all while imagining possibilities for our future.

The trip did not disappoint.  Covered bridges stretched across babbling rivers, turkeys ran wildly across tiny country roads, farm stands lined up their plump pumpkins to announce the arrival of fall. 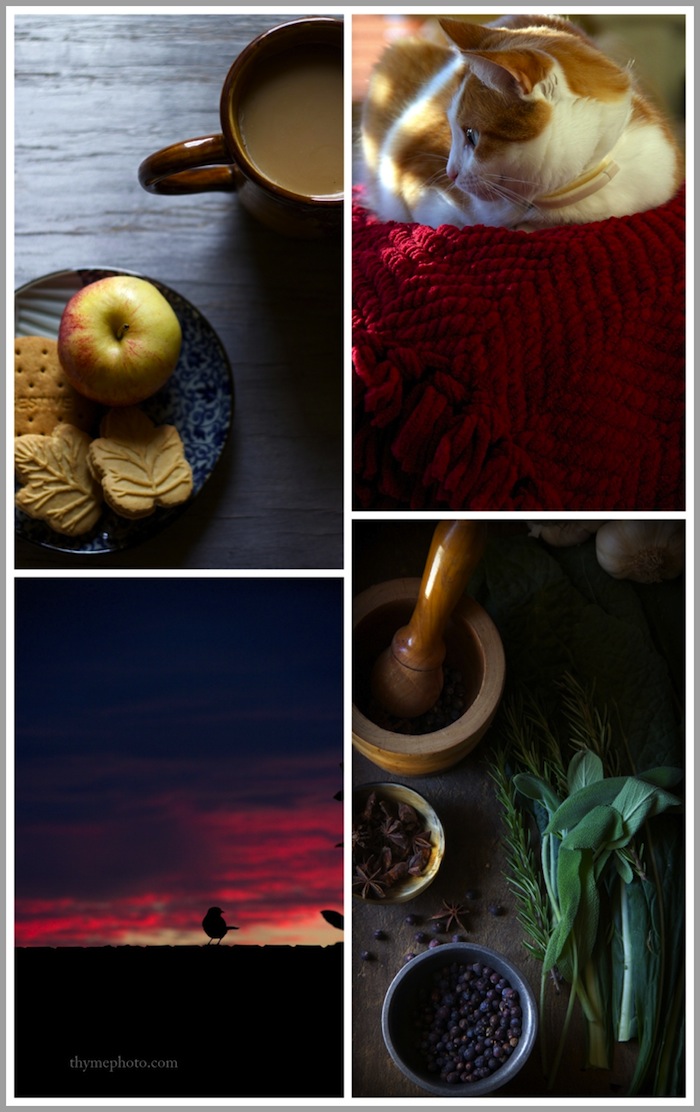 Little did I realize that the whirlwind trip would end up presenting us with 4 beautiful as well as very diverse home options to dream about after returning back to Texas.

I was originally only going to scope out and hopefully lock in an apartment location so that we could get a foothold in the NE before winter covered the land in a sweet white blanket of snow.  After settling into a temporary spot, we imagined ourselves slowly beginning the journey of traveling from different villages and towns searching for our dream home. 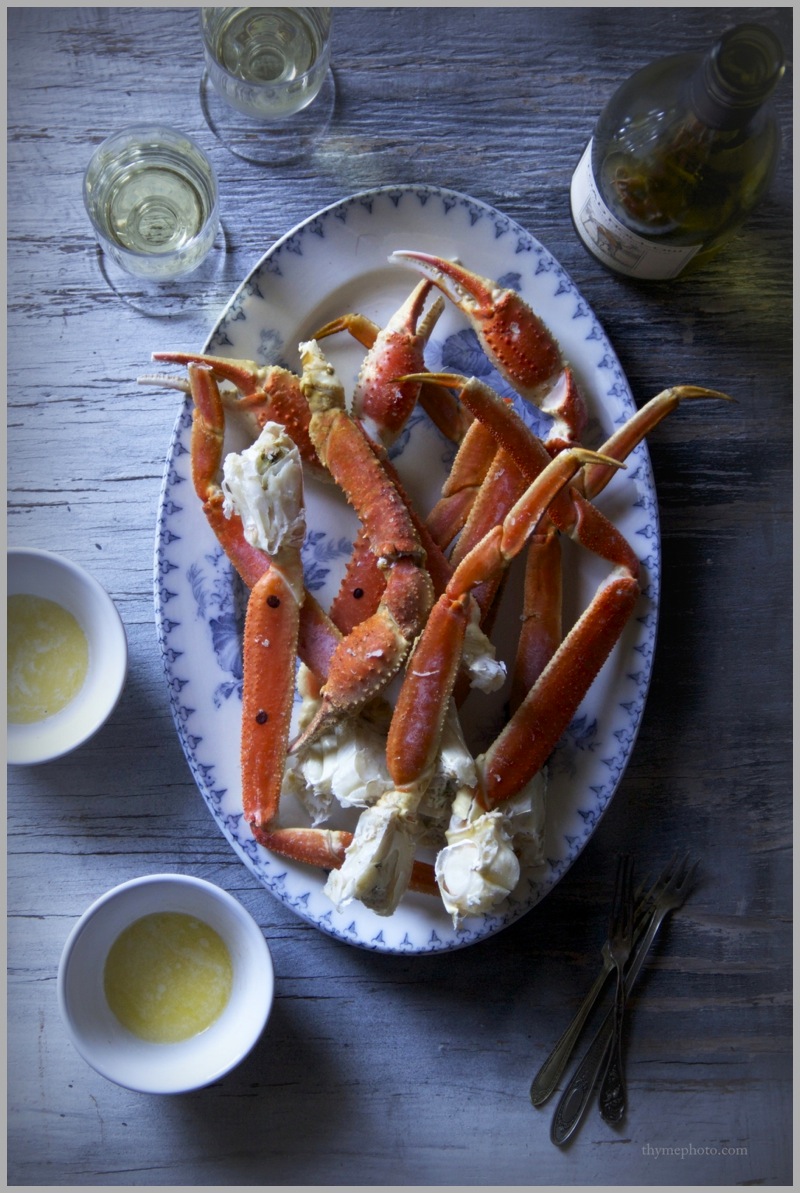 Surprisingly, after seeing handfuls of homes on the market, I ended up assembling  4 definite home scenarios that would easily fit the criteria of dreeeeeamy "dream" homes.

At dinner back home, while wrangling with spindly crab legs dipped in melted butter, I described to the family the first house and how it left me nothing short of breathless.  This rambling salty Cape Cod shingled home, at the end of a seemingly innocuous dirt road, opened up to the most gorgeous mountain views that yawned from west to east.

Standing out back of the house and looking across the vast mountains just took my breath away.  At the time, I tried to imagine not only the possibility of owning but the thrill of living in this special location. 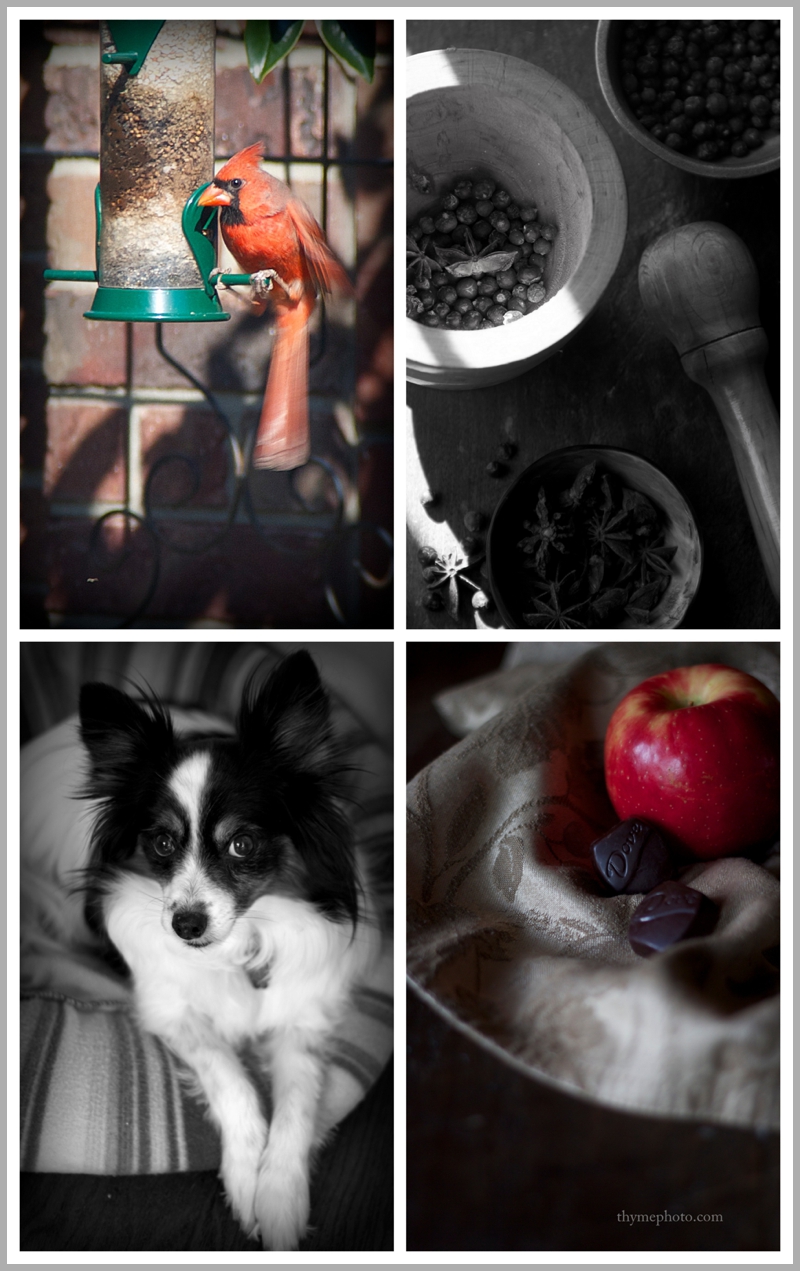 During another meal back home of succulent honey smoked wild salmon and roasted smashed potatoes, I carefully described the second "dream" house scenario. This one is oozing with early New England history.  This dark smokey grey center chimney cape was built by two brothers post Revolutionary War, was lived in by a famous American artist, and is tucked deep into a cozy cluster of pines, maples, and birches. A most enchanting pond out front shimmers with reflections of the old maple trees that sway their branches overhead. It wouldn't be out of place to imagine Thoreau contemplating life under one of the bowing tree limbs. 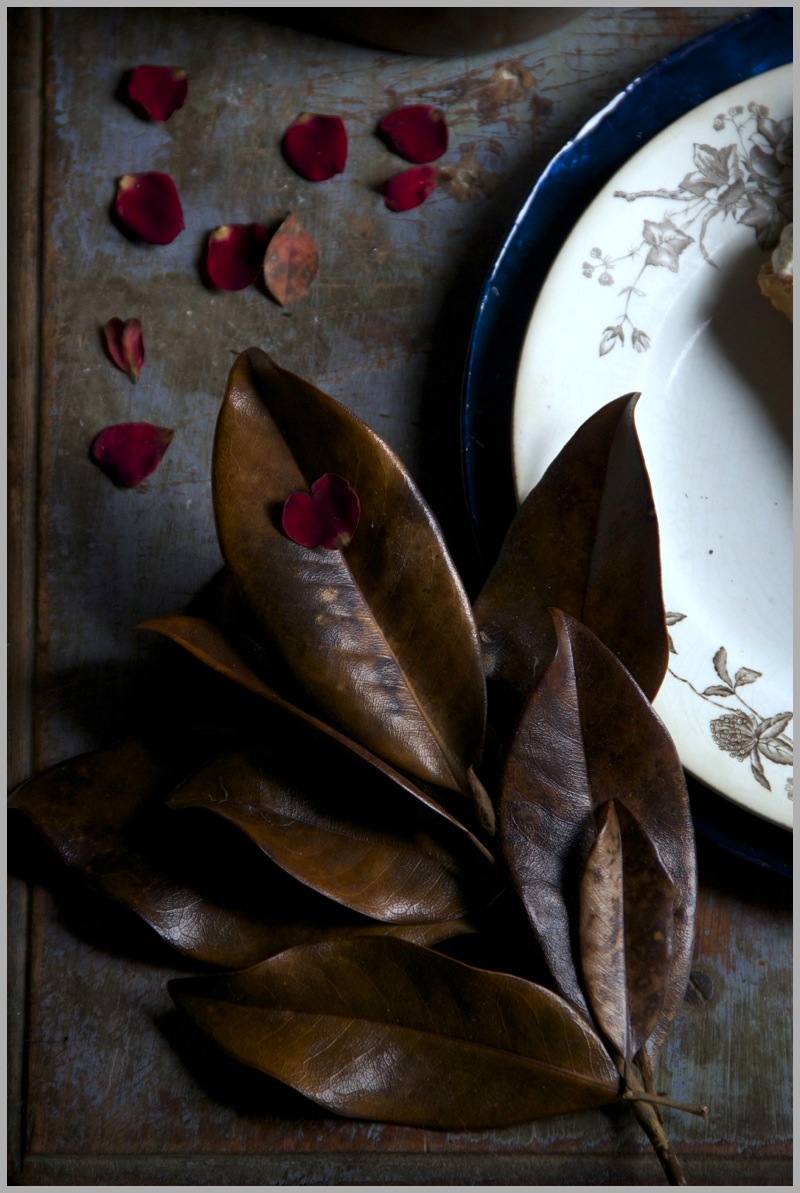 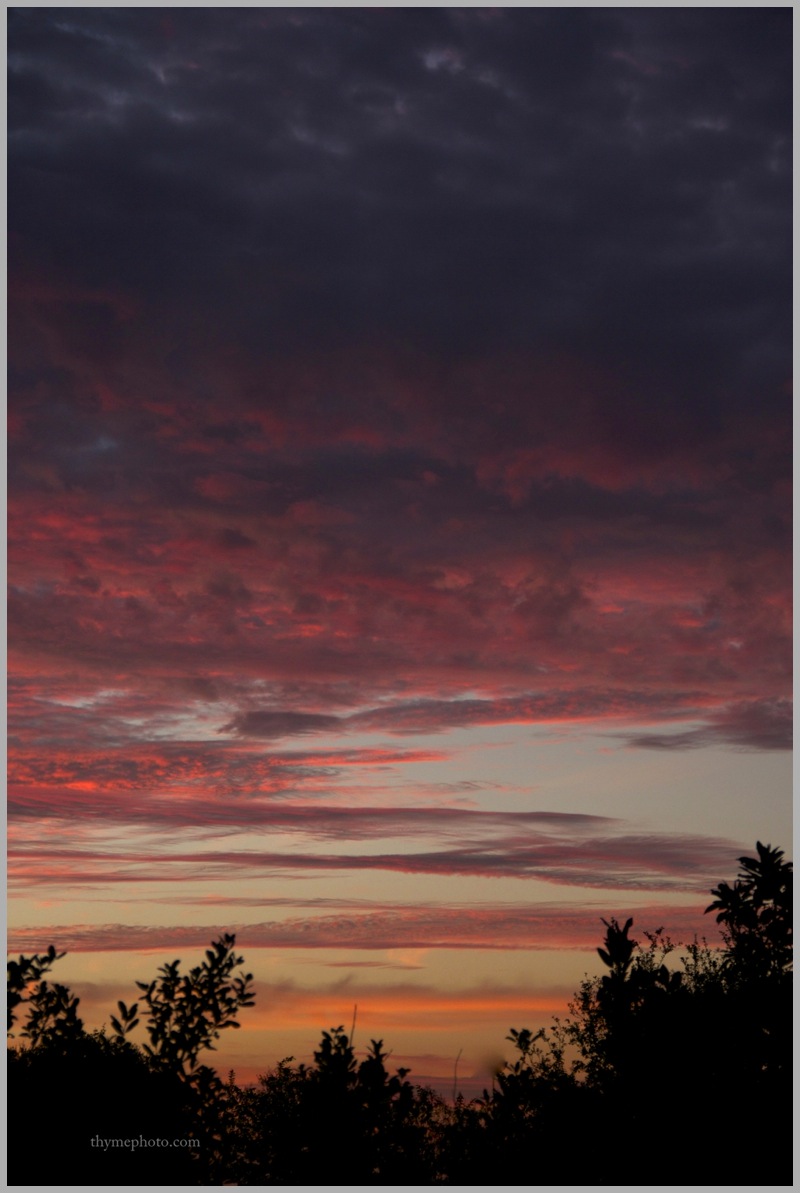 Little did I realize that the unfolding downside of seeing such tantalizing real estate and returning home with visions of dream homes dancing in my head every night...would end up turning into rather nighmare-ish unfoldings of one disappointment after another. 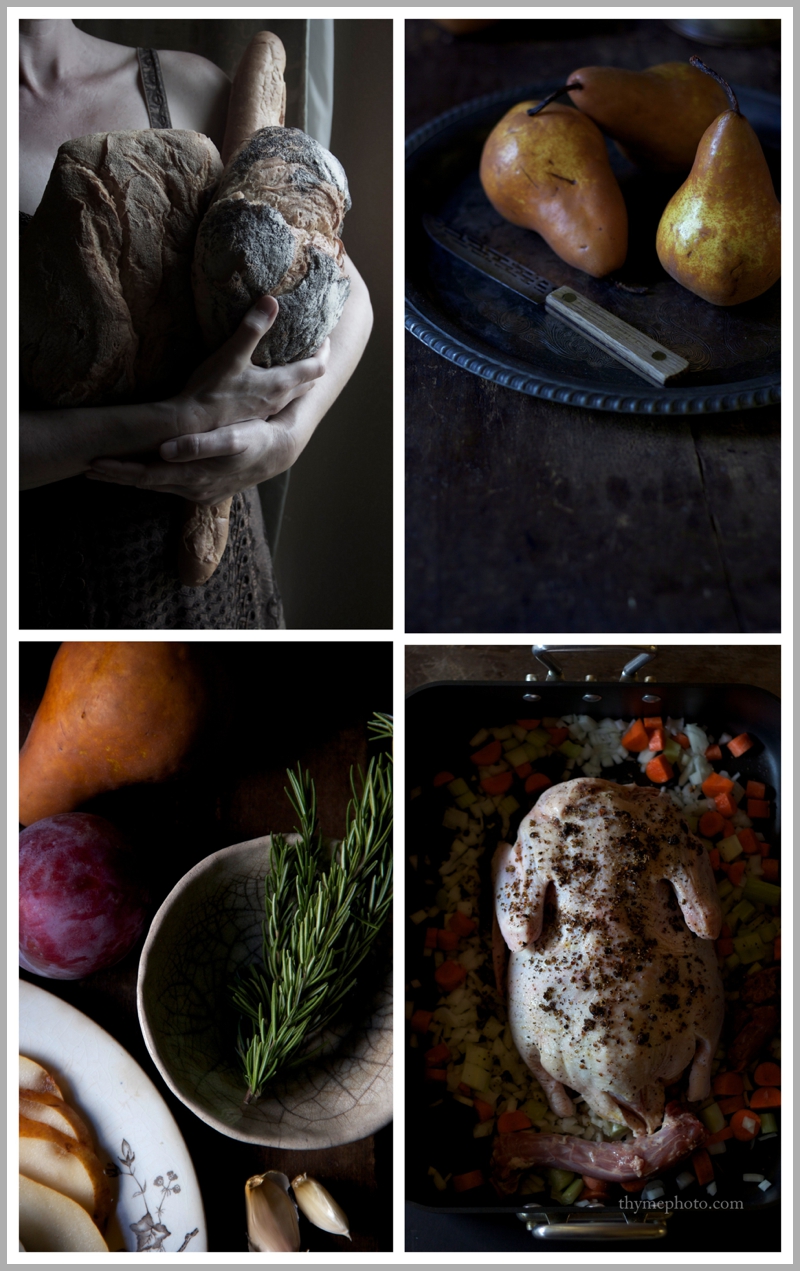 The ill-begotten moral of this story, that I've now painfully learned, is never NEVER look at real estate until your current house has a SOLD sign on it.

Now, back in Texas, with closets cleaned out, with the house scrubbed ready for showings, with freshly baked chocolate chip cookies in the oven to entice buyers to buy our house simply on the aroma of cookies alone...we sit, and sit...and sit.

I'm sure I have mentioned that the virtue of patience is a quality so elusive to me that there might be more chances of seeing a shooting star every evening upon gazing at the midnight sky.


What might be the culminating climax of this personal journey that contains one moral to be painfully suffered after another?

In Helen Keller's words, "We could never learn to be patient, if there were only joy in the world."

I kept reminding myself that this was all a test of my patience and the sweet fruit at the end would be dream house #1 (mountain top), or #2 (oozing history), or #3 (gardens galore), or....#4 (cozy and quaint). 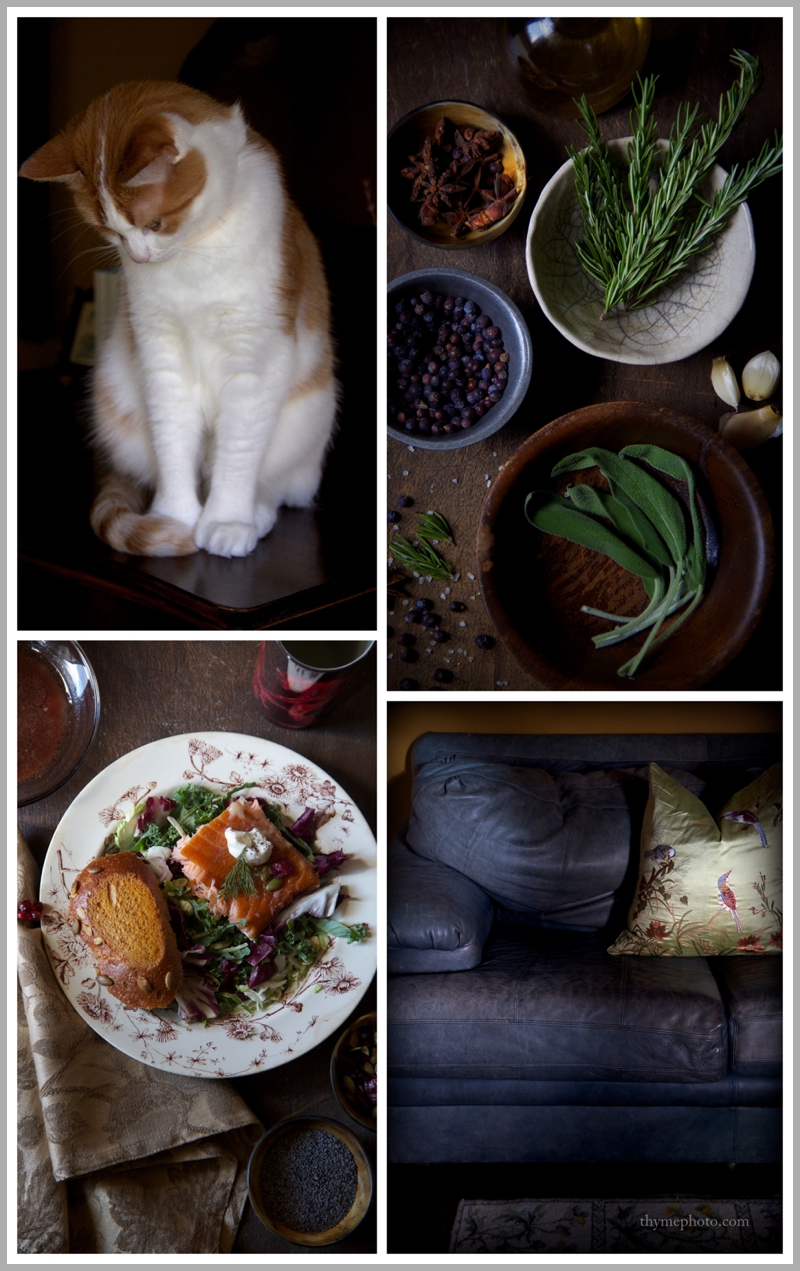 One particular fateful email from our New England realtor slipped into my inbox with a swooshing sound of despair, a suggestive title of dread...and an unpalatable delivering "ka-ping" on my phone...all as I was innocently contemplating  Sunday Supper ideas.

"...went under contract" was all I could make out in the damning title. Hilda, our realtor in the NE, couldn't believe it and cringed to have to deliver the news, but dream home #1 was gone...gone...gone...

After feeling the air deflate right out of my lungs, the information slowly sunk in while the moral of my quest for the dream home began to painfully take shape.

The long and short of it is...while waiting for our house in Texas to sell, we have now lost not one dream house option but three. Indeed, we went through hearing a series of melodramatic words like "sold", "under contract", and "taken off market by seller" to remind us that there cannot be joy in the world without presence of that unwelcome middle emotion called  "suffering".


Somehow I had to throw my energy into something that would symbolize the melodrama that was drowning out the crooning sounds of what was supposed to be lullaby tunes playing in the background of my pinterest boards of dream homes, dream bedrooms, dream porches, dream mudrooms.

Melodramatic...emotional...sentimental...histrionic!  I felt strong inclinations to stomp into the kitchen and take my frustrations out.  It didn't take long before I knew just how I would do that.  I would roll, pound, and poke ingredients into little innocent looking...tortellini.

Italian food would be the food remedy to cure my tangled angst!

I would drown my histrionics in a beautiful, tedious, painfully prepared Italian meal. 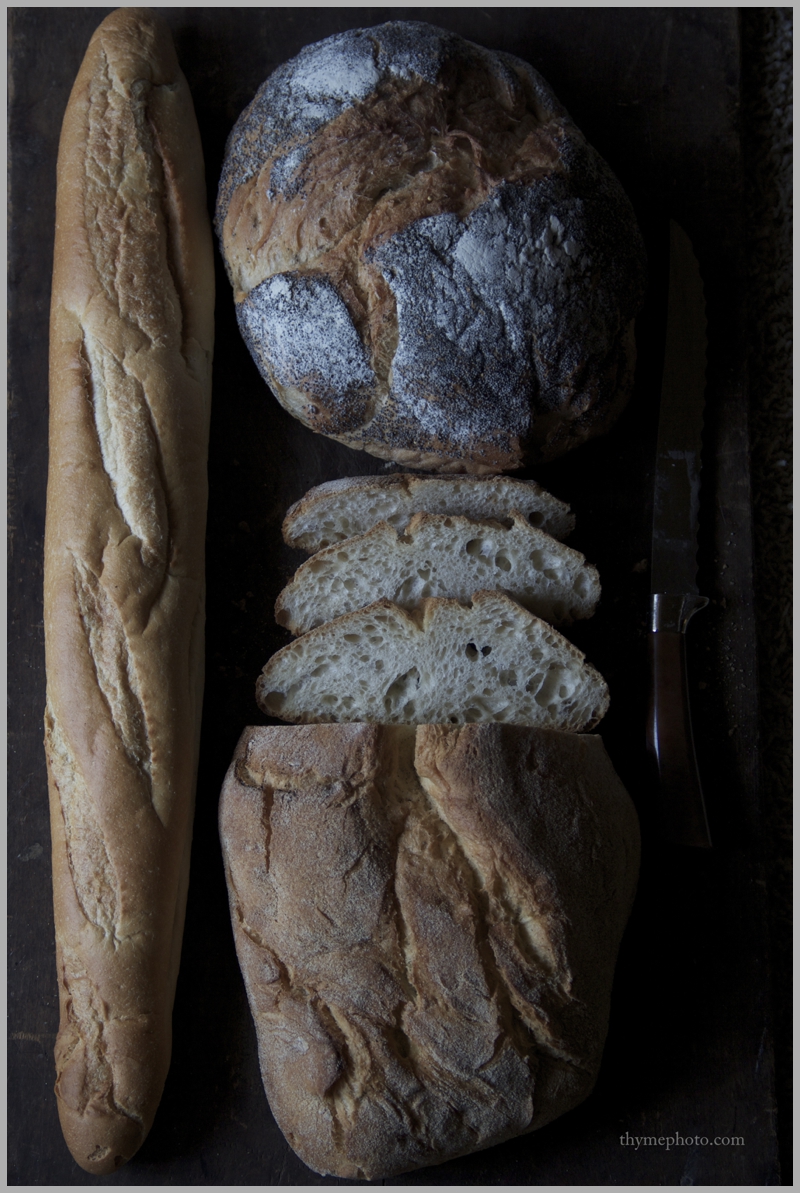 In the back of my mind, I knew just a saved menu that would be resurrected to balm the sting of thrice received bad news.  I would make a hearty dish that would be accompanied by a robust bottle of full bodied Italian red wine...and glug the whole damned bottle too.

...painstakingly roll plump pillows of Tortellini...each stuffed with a slow roasted duck and wild mushroom mixture...all  glazed over by a sweep of caramelized pear sauce. 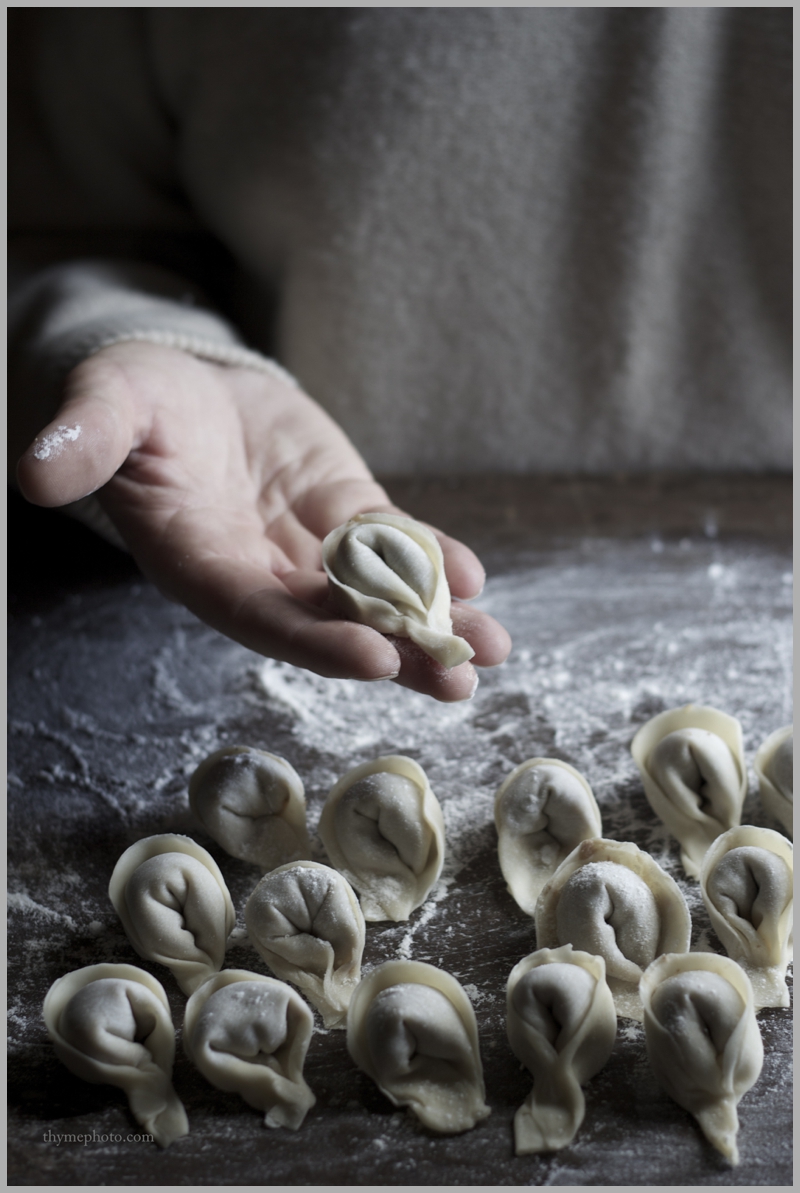 The sting of bad news would be bathed in a mind numbing salve of all things from the land of verbose melodramatic emotions that celebrate, mourn, and contemplate life with drama and flair...all things Italian. 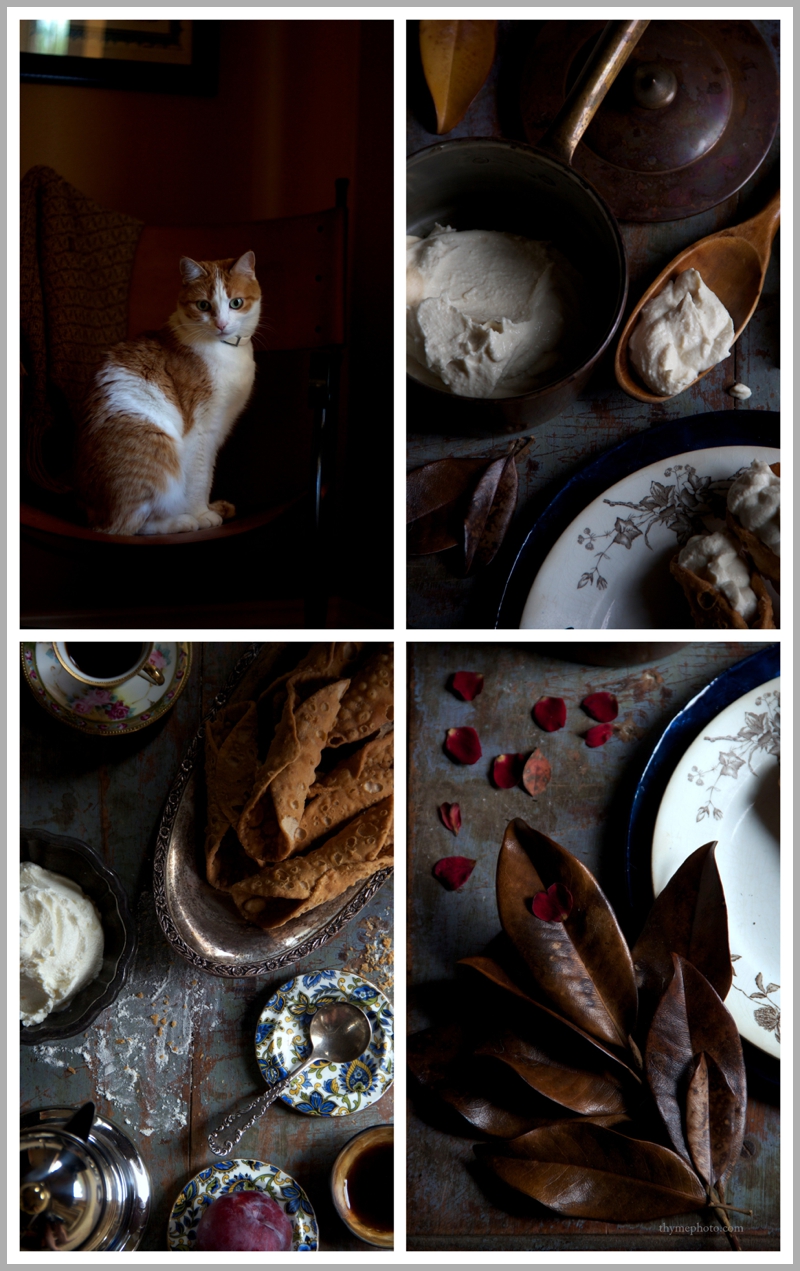 For dessert...nothing short of cannoli!! (this must be said with fingers and lips pursed together and thrown up to the sky)  Cannoli, with its sharp crunchy pastry shell would symbolize the harsh realities of plans that crack and shatter.

Pastry cream...soft, lush, and gently sweetened with hints of fresh vanilla would be pillowed inside the hard shell and symbolize a balm of soothing blissful satisfaction that will hopefully end the meal with happy contemplation about all things sweet and joyful in life...just quite elusive at the moment. I assembled all of my ingredients, oblivious to the realization that the clean up would be unavoidably painstaking.

But, making this Sunday Supper was just the cure for how to spend my afternoon lost in the world of pasta sheets, aromas of roasting duck, slices earthy mushrooms, and squirts of creamy thick ricotta cheese. 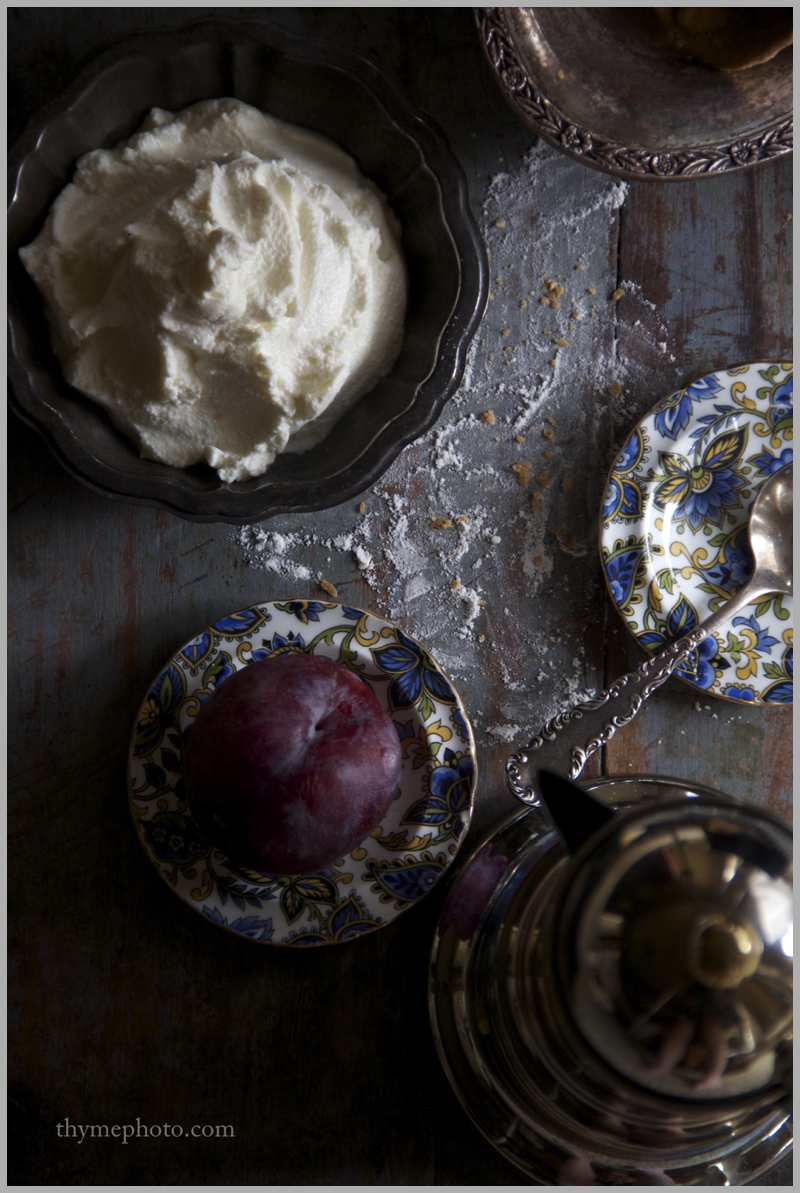 We decided to embark on this journey knowing it wouldn't be an easy one.  Little did we realize that it would prove to be more strenuous just getting out of the starting gate!

This certainly was a supper full of labors of love.  From generously rubbing and seasoning the duck with juniper berries and lovely crushed anise...to the sauté of wild mushrooms in hot butter, preparing dreamy dishes in the kitchen would prove much more doable than our bigger feistier plans could be prodded and poked into igniting. 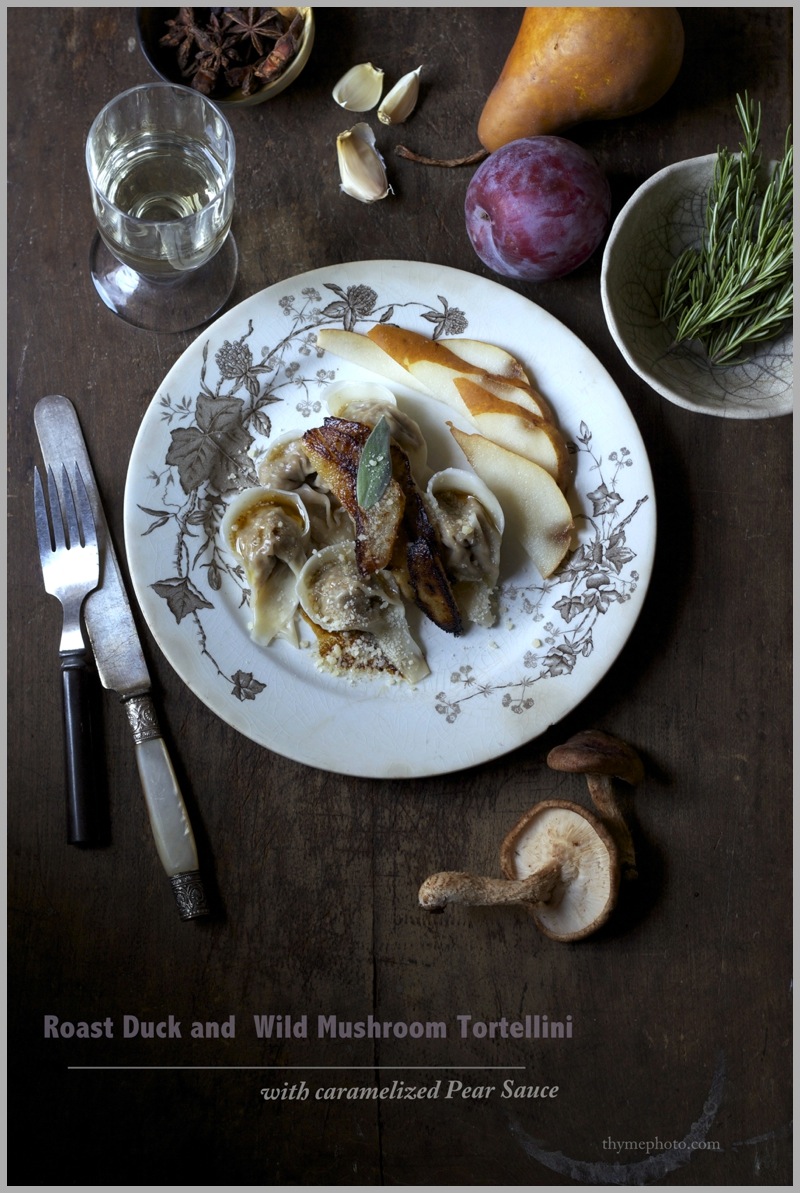 Sitting down to a sumptuous meal of tortellini with caramelized pear sauce, torn chunks of chewy french bread, a bold bottle of sassy red wine, and crunchy cream filled cannoli was going to have to be just the right level of dreaming for the month of October! 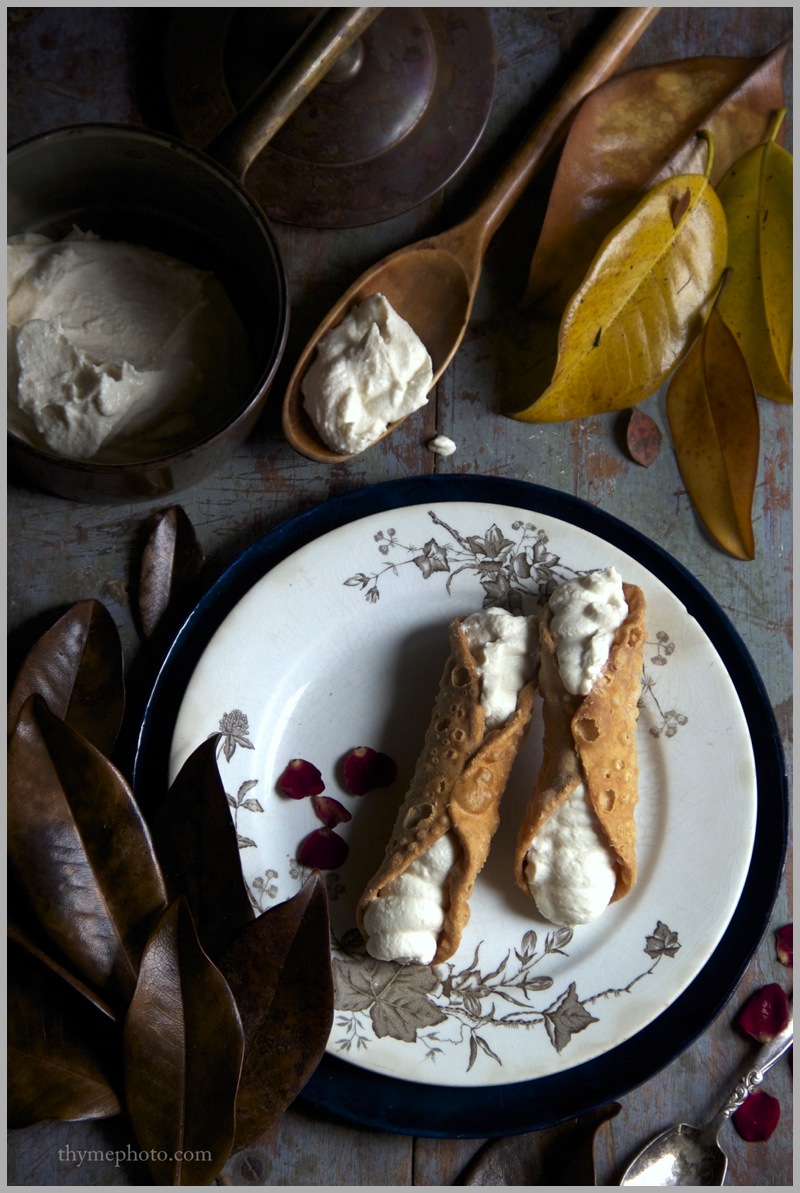 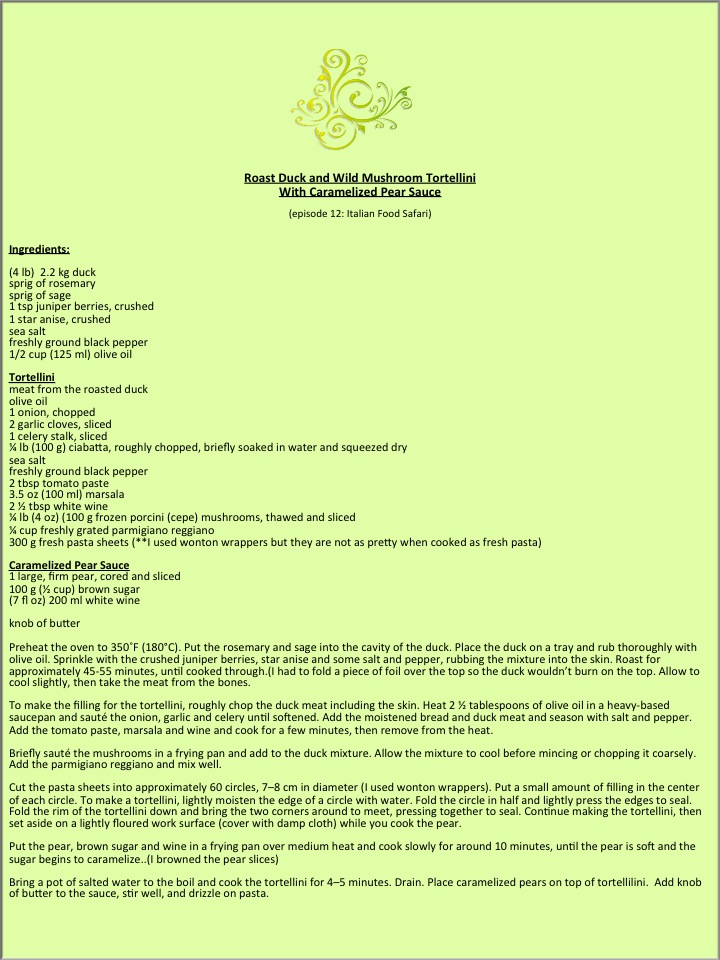 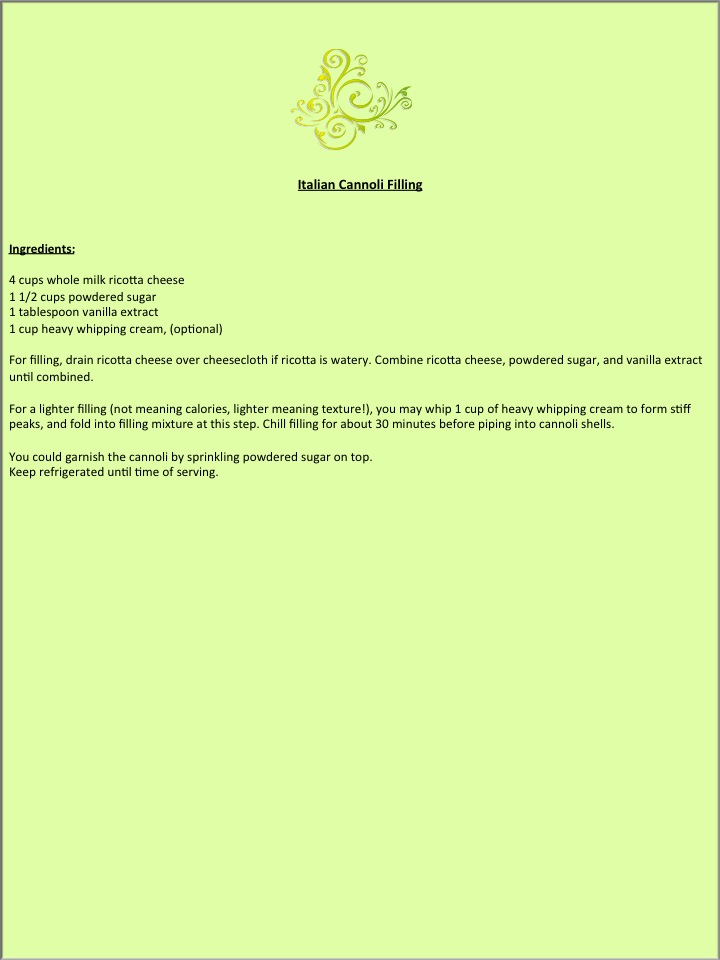