I'm sitting at my long slender dark pine table in the kitchen that I sanded and stained this summer.  I have a steaming cup of french roast that I percolated in my little two cup coffee maker we brought back from Italy eons ago.  The clouds in the sky look low and heavy with moisture and they're closing in around my space. A low rumble of thunder eventually reaches the table and Chester edges his way closer and closer to my feet.  The impending storm and looming darkness is making me feel sleepy and dreamy.


The outside chatter from Nick and John, the painters, as well as Chris, who is installing outside cedar siding is getting more and more slapstick and silly as the long day nears its close.  Their music pumps outside all day long as it provides entertainment and laughter as they mimic and laugh at some of the tunes.  Sometimes it is head banging music and I hold my head in my hands inside.  I want to run outside and "accidentally" flick the radio dial to a mellower tune.  Most of the time, their banter and musical choices have me in stitches as they work hard physically but good-naturedly goof off with one another.  Patrick threatens to put up a webcam to capture their goofy banter and predicts it would ...go viral. Often, though, the music is soulful and rhythmic, especially when one of the guys starts whistling beautifully and the other two join in the tune by singing together.  Those moments are lovely actually...I sit here and smile to myself at the wonder that is humankind. What a summer it has been. What a fabulous group of craftsmen, painters, woodworkers, framers, masons, plumbers, electricians, and tilers have walked through Nehemiah Ordway's old homestead this summer in this tiny town in New Hampshire. 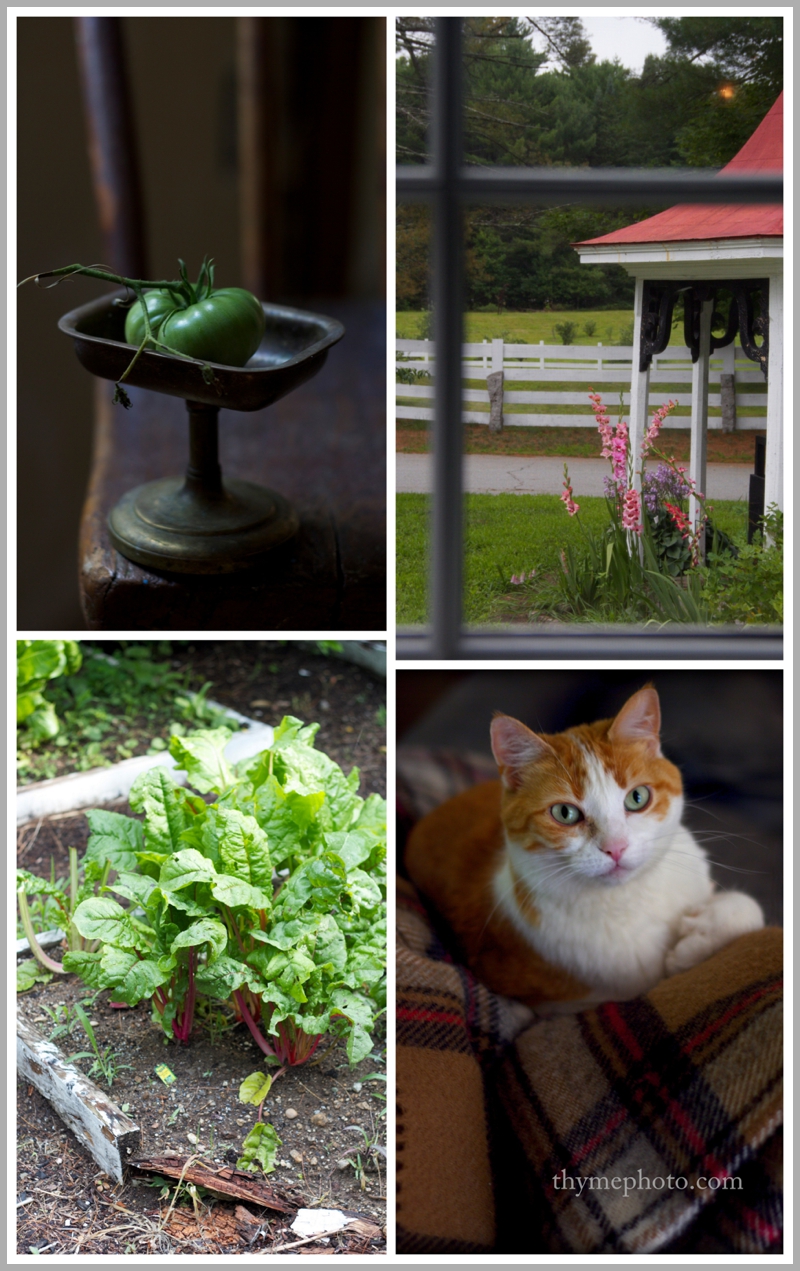 I wish I could bottle this summer's memories of the people who have touched this home.  I would then tuck the bottle inbetween some of the loose stones in the basement.  Some day, future owners would delightfully discover the bottle and its precious memories.  They would unstopper it  and out would flow the experiences, the excitement, change, and fun that took place here in the Summer of 2015.


One summer delight is the fresh flowers that were snipped and plucked throughout the summer.  They flowed in and out of my old pewter vase all summer long. First came the perky daffodils with their puckered lips; lillies then stood tall and fragile, daring a strong wind to just try and destroy their fragile beautiful build.  These were followed by the heady and aromatic  bunches of lilacs.  Next came the gnarly and sweet scented apple blossom branches with their tiny little pink buds. And now front and center on the kitchen table are the lovely graceful blushing Roses of Sharon. 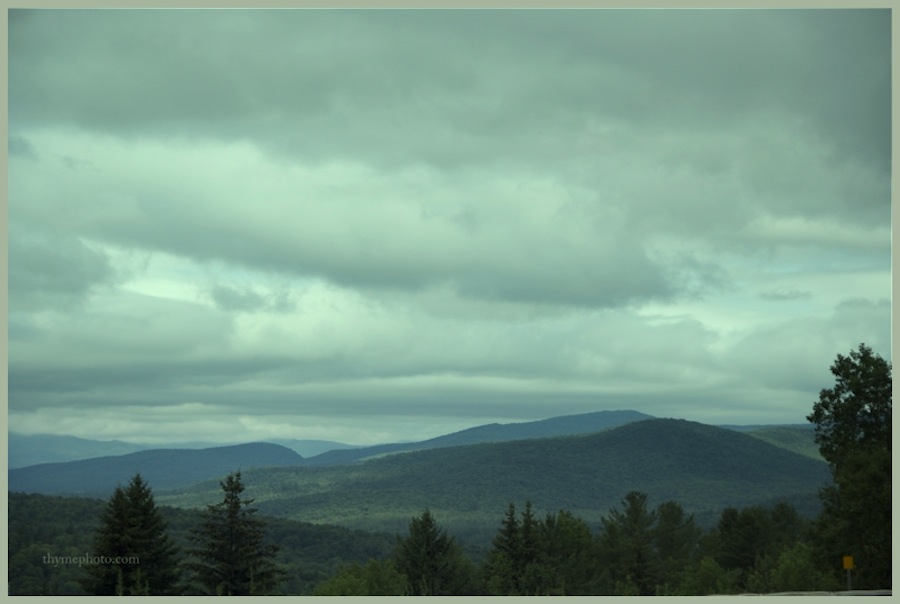 Guests to the homestead were few and far between this summer.  But, that will end soon. The October calendar is filled with friends and family, coming from near and far, that are booked in for every weekend of the month.  It's going to be a full house...of fun, laughter, and gosh...hopefully good food. 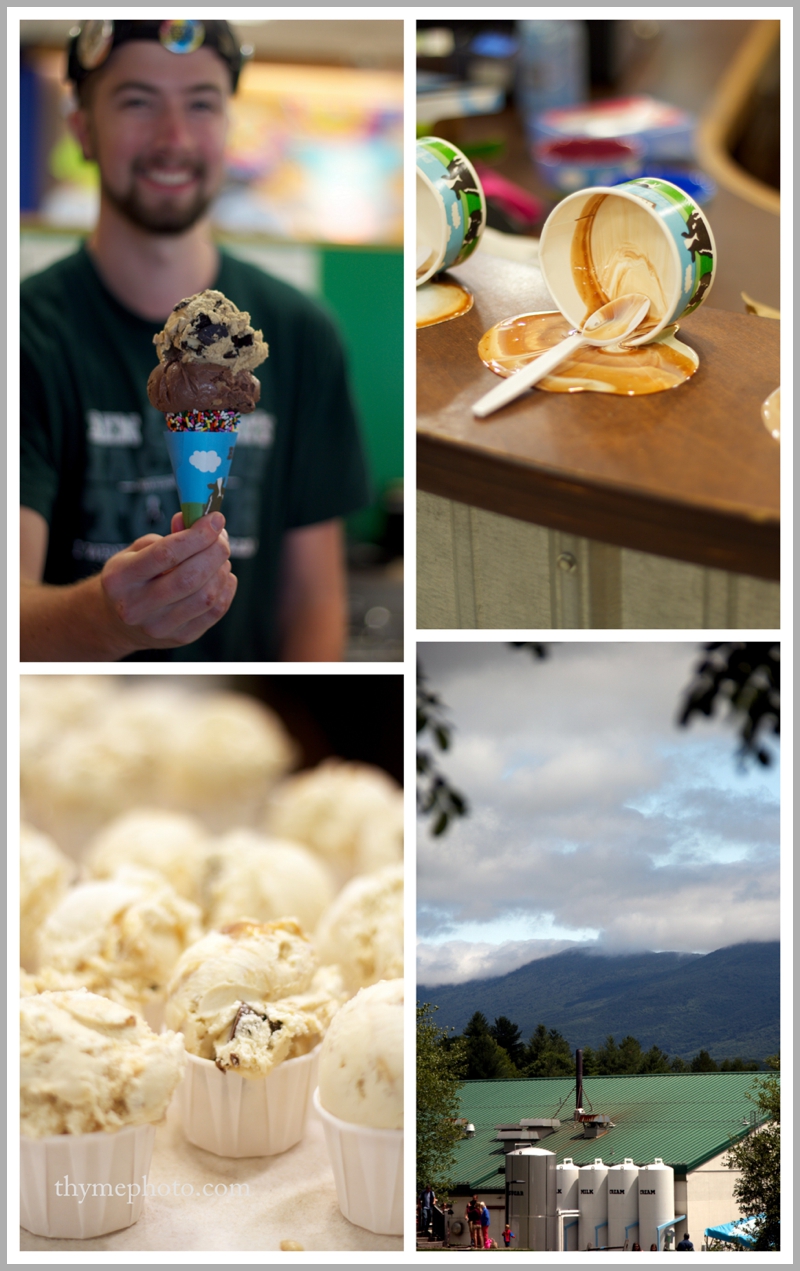 We were able to slip in a visit from my nephew and sister-in-law mid-summer.  Throughout the renovation process, we have been able to take breathers from the constant tumult happening at the house.  Mary, my SIL, came for a visit from Missouri and provided an excellent reason for us to get out on the road and explore unseen areas of our new homeland.

We headed West one day...then up to a Northern mountainous climb the next...followed by a coastal trip on the ocean later in the week. Mary had heard about the Ben & Jerry's factory over in Vermont.  It didn't take much after that mention to twist my arm and scuttle everyone into the car to make Vermont our destination...and Ben & Jerry's ice cream our reward.


As we immersed ourselves in the scenes of  rolling lush hills of western New Hampshire, as well as those of eastern Vermont, the hills looked like emeralds covered in velvet cloth with streams of variant light that cast different shades of green over the terrain as they pierced through the expansive low hanging grey clouds.  It was sunny one moment and then cool and breezy the next...with a rain shower that followed later in the day punctuated by a brilliant blue sky as we drove home.


I thought of all the places where we've lived over the years and how my SIL Mary has visited almost all of them to see us.  As a student in New York City, Mary drove from Missouri in her teeny car with my then boyfriend now husband, Patrick.  We pushed and squeezed and smushed my ridiculous amount of college bric-a-brac into every crevice of that car, wedged ourselves among the debris, and then proceeded to drive through the farmlands of Pennsylvania, the gorgeous mountains of West Virginia, the undulating hills of Kentucky to finally arrive in the tiny SW corner of the Ozark Mountains in Missouri.  We laughed, we slept, we laughed...and thought the entire ordeal was great fun. 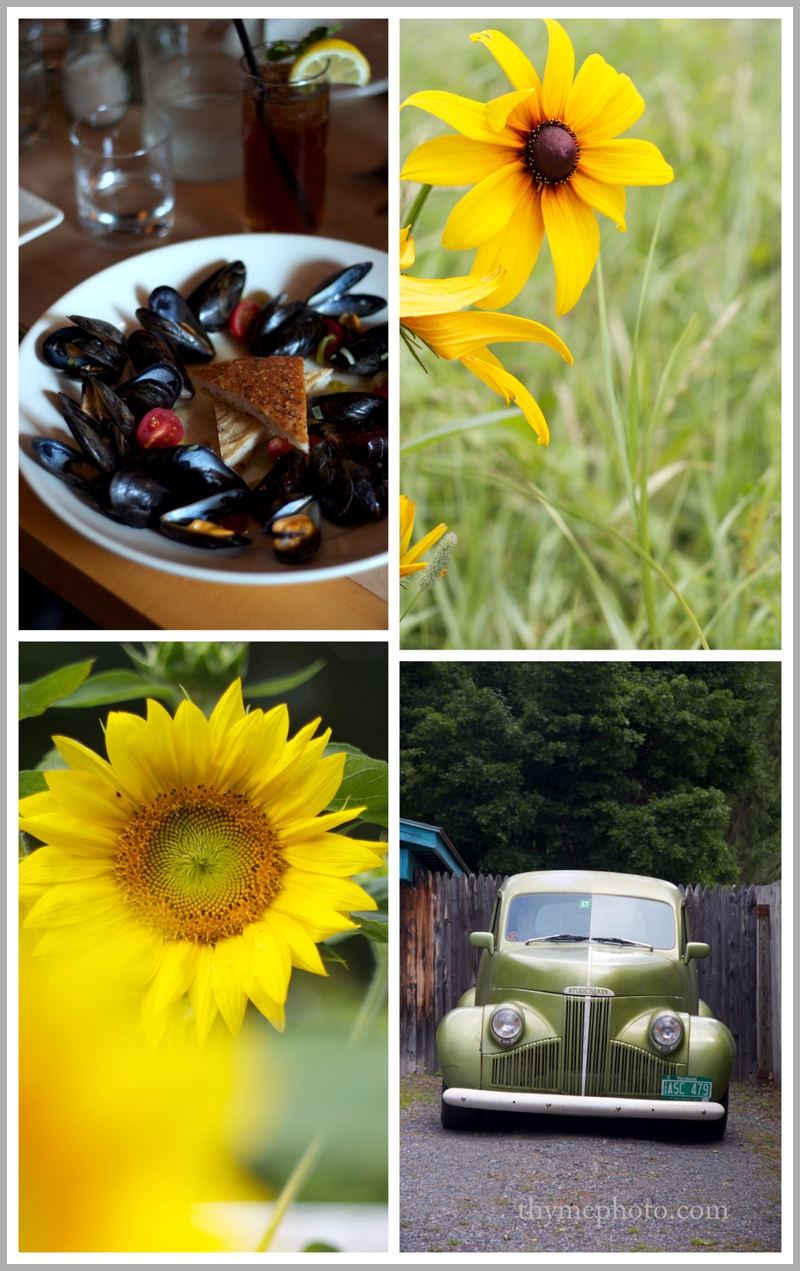 Then came the backpacking years.  We lived up in Michigan and Mary and her new husband, Tim, decided to meet us in Montana for a grand weeklong backpacking trip through Glacier National Park.

All I can say is thank goodness some of us are Eagle Scouts!!  (and by that I certainly don't mean...me). After having come through a fiasco of a backpacking trip on the island of Tasmania the year before, which included a freak blizzard, 5 foot snow hikes, and no food rations for 2 days, Patrick and I thought we had hung up our back packs for good.

Mary and Tim, knowing that we were a bit rattled by that previous trip, indulged my need for lots of security and reassurance as we hiked through the beautiful vast mountains of Glacier National Park.  I had built up in my mind the imaginable prospect on this hiking trip of....all of us being attacked by bears.

So as we hiked along through the tranquil fields of serene wild flowers, that seem to grace every mountainside of Glacier NP, I was the one in our group banging rhythmically on one of our metal cooking pots with one of the metal rods of our collapsible tent.  I happened to overhear that bears wouldn't come near us if they heard clanging noises coming towards them.  It's true...apparently.  For 7 days and 6 nights, I dutifully kept our party safe by sounding off a battery of metallic clanging noises every time I felt imagined or potential threats of bear attacks looming over the next wild flower filled horizon. 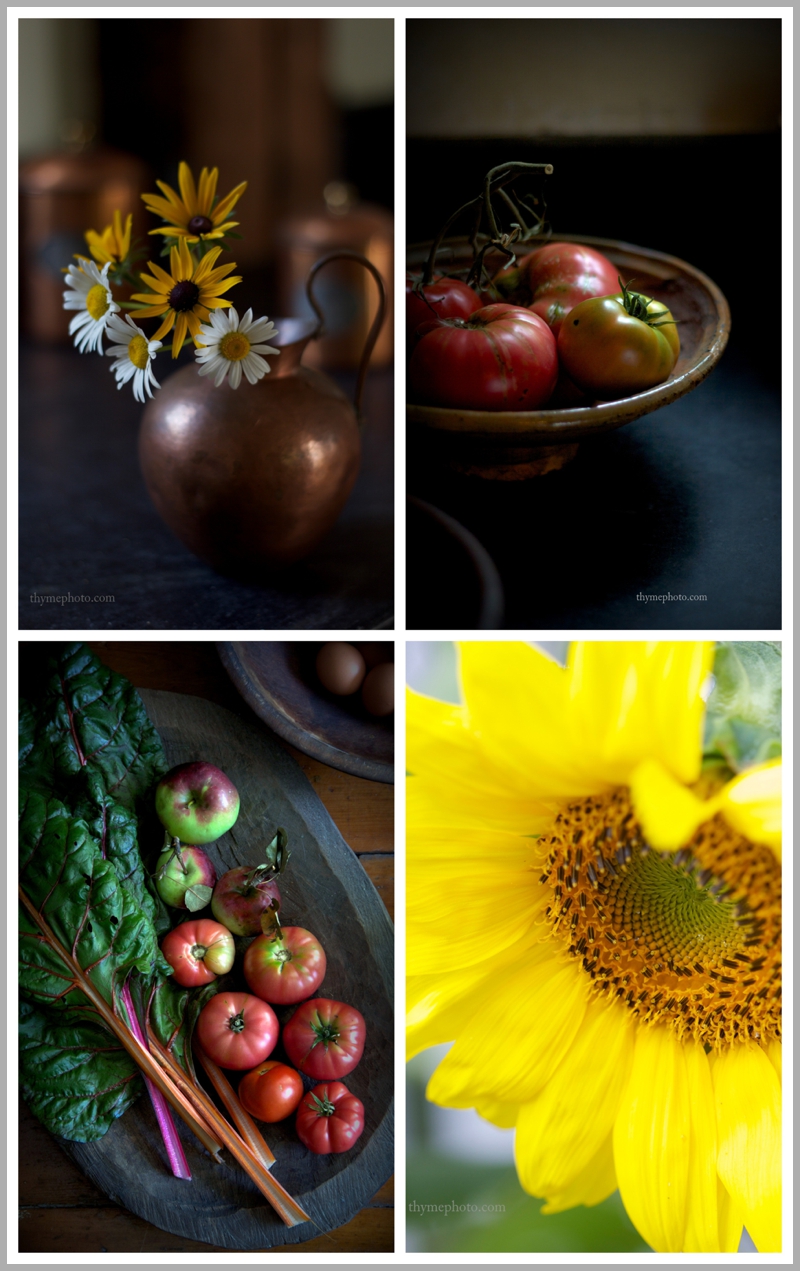 As Mary and I rolled over the hills of New Hampshire into the hills of Vermont...now with many years of trips in between and a 15 and 18 year old in tow...I thought of all those fun trips we have taken together.

This trip proved to be nothing danger related, rather filled with fun, food, fun, and more food!  The Ben & Jerry's factory tour is a fun stop in Vermont.  I would offer advice on which B&J flavors to sample but I go straight for the "Coffee Coffee Buzz Buzz Buzz". Yum! 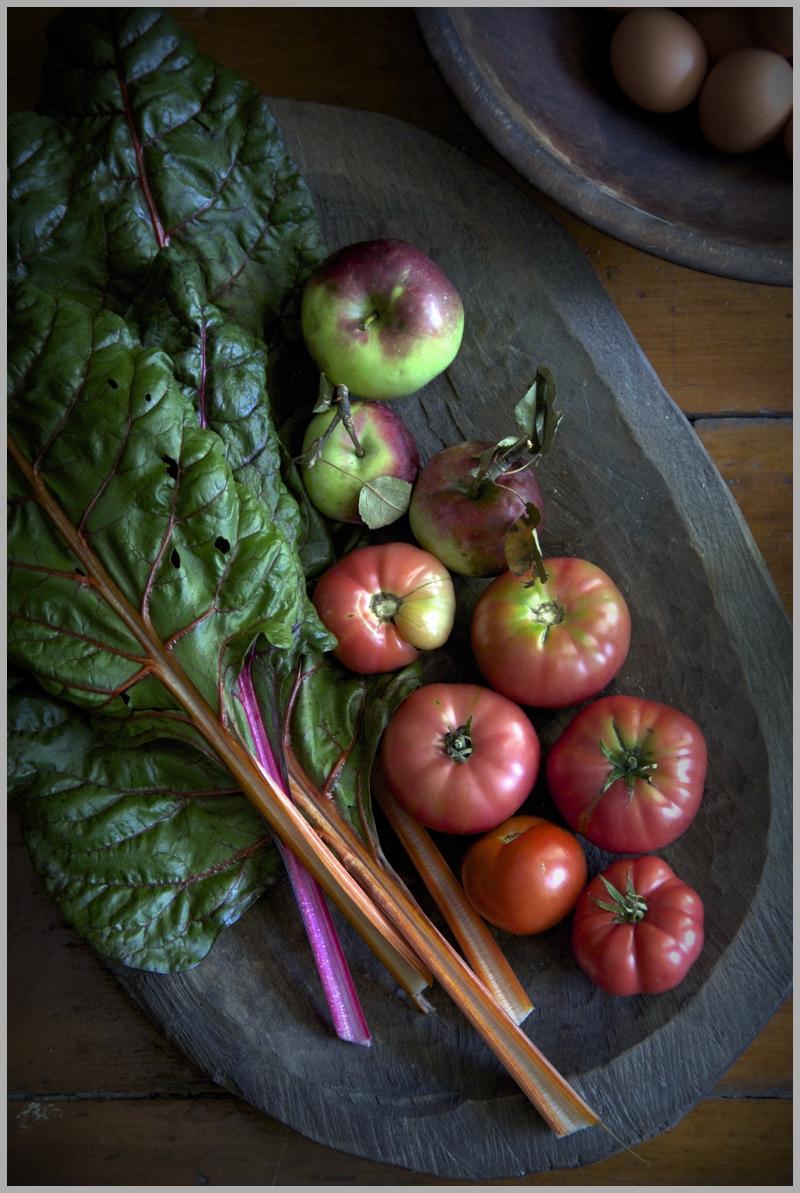 As well as new discoveries in New England...this summer has been a huge learning curve of discoveries right in my own back yard.  Literally.  When spring finally arrived and the last of the frost advisories ceased...I got to work on a kitchen garden right between my kitchen door and the entryway to the side barn.

I dutifully tilled the soil, added some ash from the wood burning stove, mixed in a little compost and fertilizer into the soil.  I was a regular visitor to our nearest Aubuchon's and everyone there knows me by name now since I peppered them with so many questions. I planted butter lettuce, swiss chard, rhubarb, zucchini, radishes, squash, bell peppers, eggplants, tomatoes, carrots, and about 10 different herbs.

I sat back wondering if anything would peek through the soil.  I've never been one to have a green thumb but I was determined to make a go of it to see what I could produce.

I chuckle now as I write this.  Little did I have to worry about seeds piercing through the soil.  The garden nearly jumped out of the soil.  No wonder everyone in New Hampshire seems to have a garden.  The soil is rich and strong.  Before long, I was hauling in zucchinis, armfuls of lettuce, cherry tomatoes, peppers, and stalks of rhubarb.  Salads have been tossed every other night it seems. Every sandwich includes slices of tomatoes slipped inside.  The zucchinis started to pile up until I tried gifting them to anyone who looked remotely interested.

I made this garden soup and added some meat stuffed tortellini to it in one of our many attempts to use up garden produce that filled up the kitchen this summer.  It is a delicious summery soup filled with all of the goodness from my kitchen garden.  We had lots of leftovers.  I removed the tortellini from the leftovers and put them in a separate container so they wouldn't get too soggy and poofy.  I gently reheat the soup leftovers and then add the tortellini into the bowl so they don't absorb too much liquid. 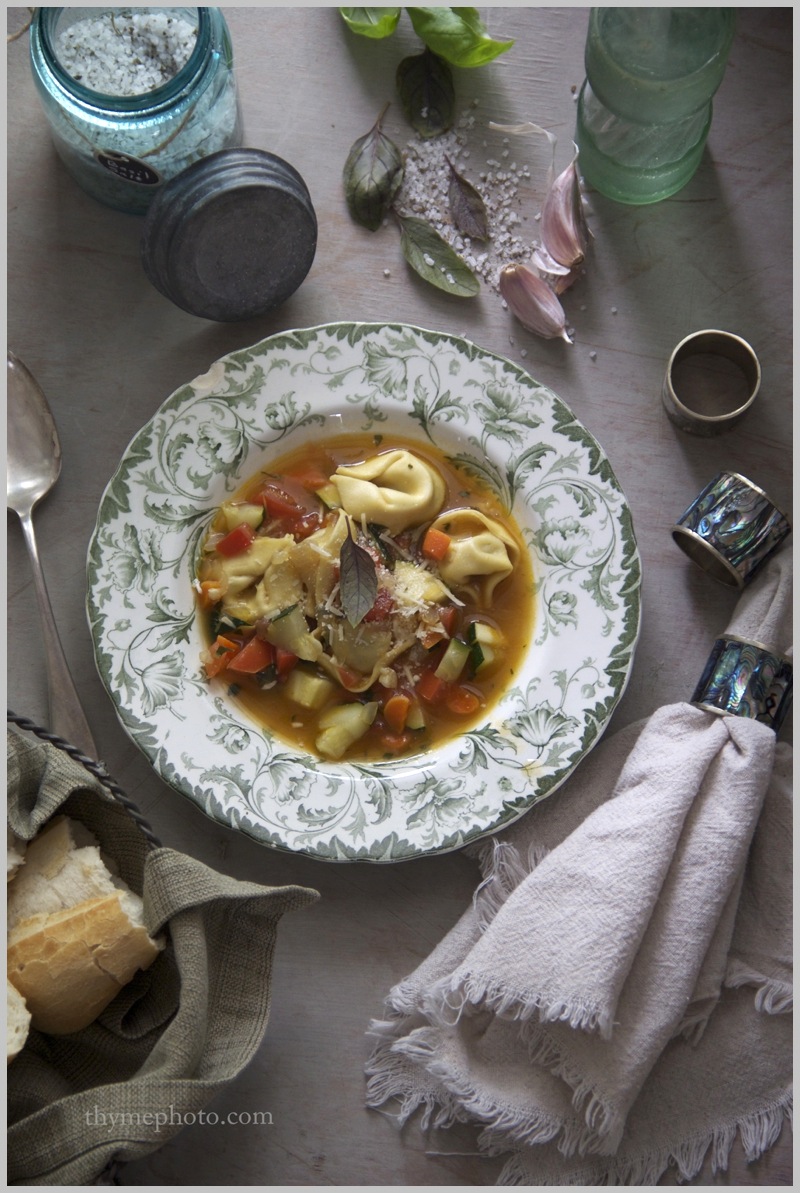 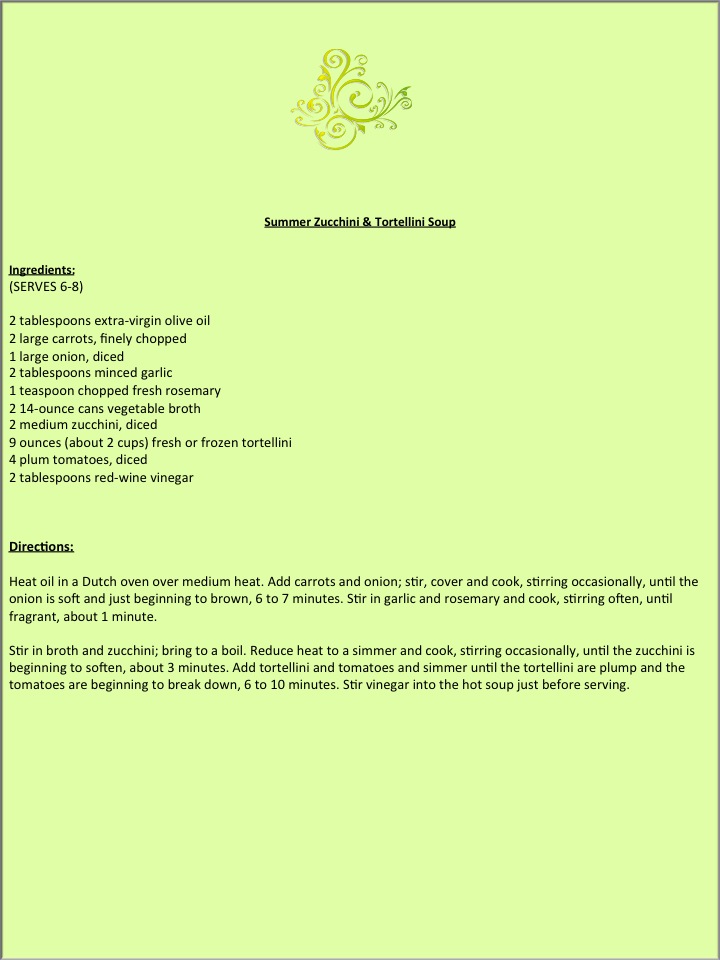