"Riley, I cannot wait until Thursday..."  I pronounced while settling ourselves into our flight to Paris while lining up 3-4 movies to entertain myself for the next 9 or so hours of travel time.

"Mom... I, as well as most people you have encountered between Houston and the airport, are now very much aware of your excitement for Thursday's plans." retorted my now less than favorite, favorite son.

I gave him a withering look,followed by an appropriately sulky expression, and went back to my  reverie about our upcoming Thursday date for the...

I readily admit it. I have been utterly spoiled now with my discovery of food tours.  For a personality like mine...whose travel experiences usually center around meal times, market shopping for meals, and tasting anything and everything that looks unique and interesting during and inbetween meals...food tours have become my standard go-to indulgence.

After having an amazing "off the beaten path" themed food tour in Istanbul, Turkey here, and then two more in San Francisco here and here...I am indeed smitten with this way of introducing culture and cuisine into travel.


I chose "Flavors of Paris" food tour, led by Canadian Lisa Rankin, because her site description seemed so sincere and personable.  Also, I was staying in St. Germain de Près and her signature tour highlights a culinary journey of this charming, sophisticated and artistic neighborhood of Paris.


When Thursday rolled around, I nearly skipped out of our apartment, which if you saw the twisty winding narrow staircase of crumbling tilted tile steps leading to the street, the image of me actually skipping would be giggle-inducing.  After embarrassing my teen son, by acting like a hyper school-girl, I settled down as we fell into the Paris flow and tried to look a bit more sophisticated as we walked the few blocks to our meeting point with Lisa...at the historic St. Germain Church.

With nary a glance at the patisseries we passed, filled with  crescent-shaped croissants and just delivered baguettes,we kept a straight line walk to our meeting point, knowing we would need as much tummy space as possible for the tastes of a bit of this...and a little sample of a bit of that.  Lisa's website promised us many tastes of the flavors of beautiful Paris.  And the tour certainly delivered as promised. 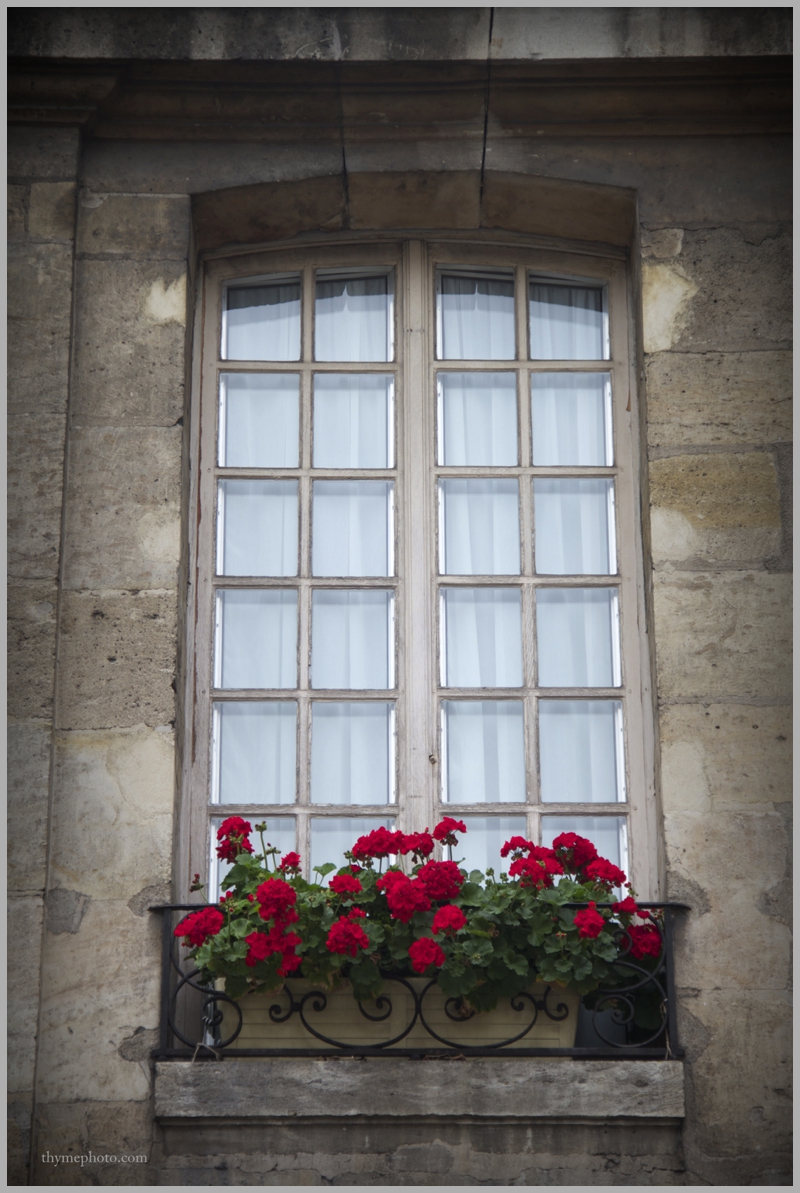 I thought Riley and I had canvassed the St. Germain neighborhood (which is the 6th Arrondissement) pretty well during our stay in Paris thus far.

However, almost ALL of the stops on Lisa's tour had eluded us. I was thrilled to drop "pins" on my iphone map of the well-chosen locations so we could return to them and not only soak in more of the experience, but do a bit more shopping as well.

When gathered at the meeting point, we were an intimate group of 7...two mother/daughter pairs, one sweetheart of a girl from Australia, and our mother/son addition.

Our first stop was the bakery La Maison Kayser.  The heady aromas lured us directly to the polished glass cases of baked goods.  Even now, as I write this, my senses can almost re-fabricate the warm earthy smell of freshly baked breads, the flaky golden croissants, and the dense braided loaves of brioche. 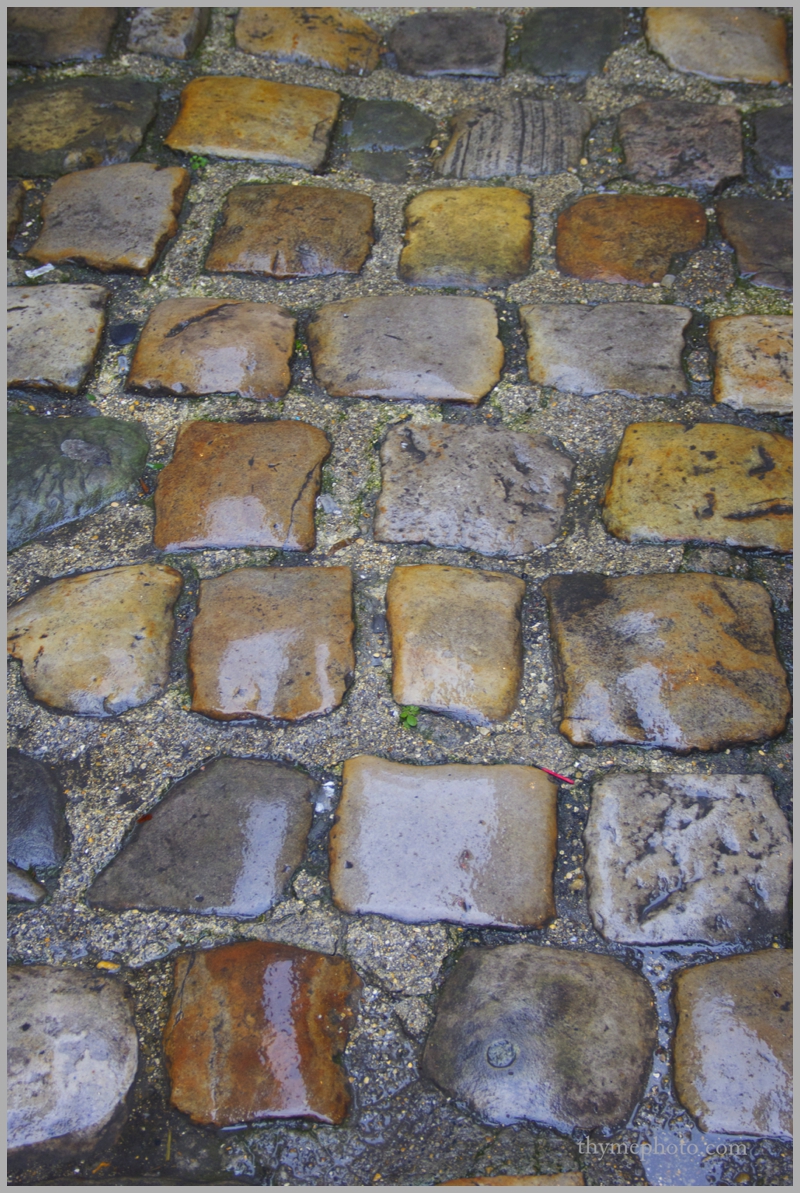 We all settled around the café tables, ready to indulge in hot crusty croissants and steaming cups of espresso and café crème...eager to hear Lisa tell us the stories of this wonderful bakery.

Each month, Eric Kayser and his head bakers, pastry chefs, and cooks develop a new recipe to highlight the seasonal fruits and vegetables.  Rosette Beaujolais bread, quetsche or mirabelle plum tart in the autumn, or yogurt and feta Mediterranean pita for the summer. 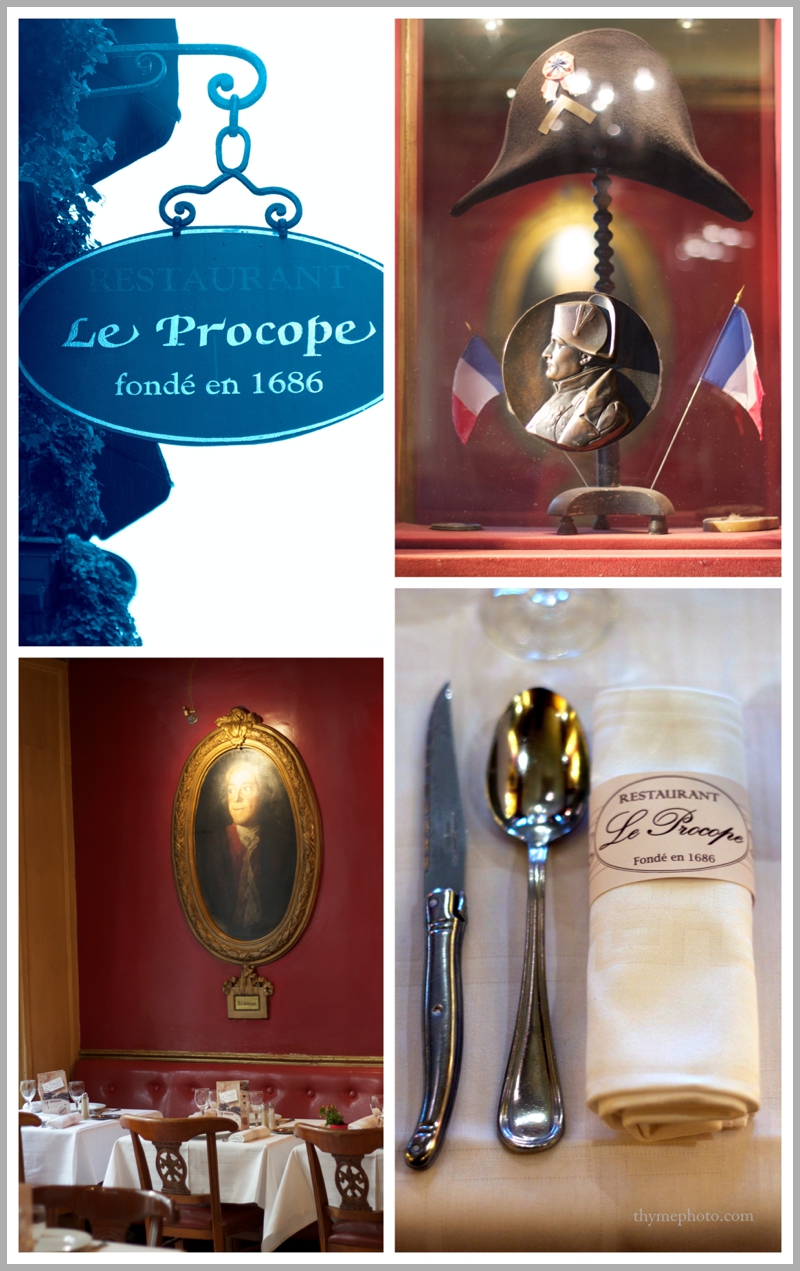 As Eric Kayser opens a new bakery location, he and his team create a signature bread that is their gift and mark to that location.  They also carefully scour regions for the highest quality grains as well as butters.  In their new bakery in Japan, the demand is so great, that customers are limited to a purchase of 2 croissants each! 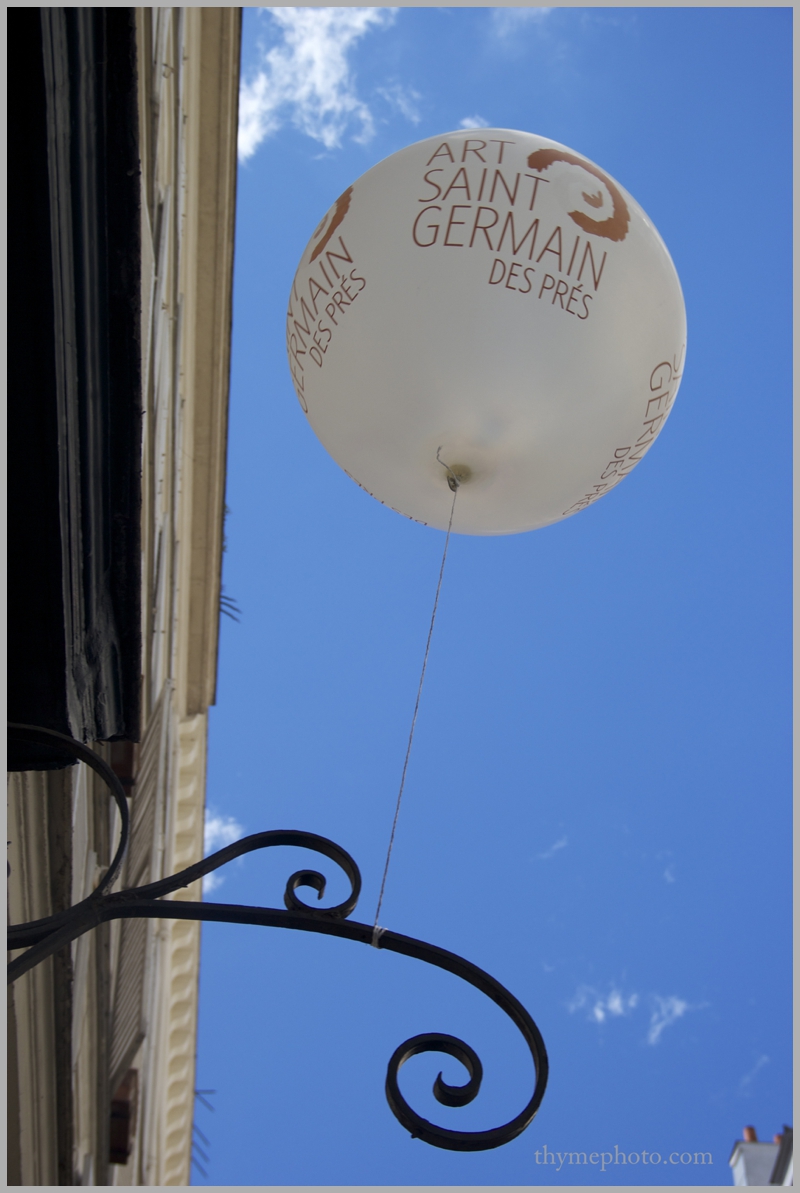 The word "lovely" comes to mind first when describing our tour guide, Lisa.  She is a soft spoken Canadian who led us along for 3 and a half hours. We never felt rushed, she answered our many questions, and she openly shared her expat knowledge of this delightful Parisian neighborhood.


Lisa walked us into the famous bistro, "Les Deux Magots", once a popular hangout of the literary elite of the city.  We were curious about the origins of the name, which means "The Two Figurines".   It seems that the restaurant used to be a Chinese silk shop, which in turn, took its name from a popular play of that time period called "Les Deux Magots de la Chine".  In time, two statues of traveling Chinese merchants were erected in the restaurant and even today, they sit tall and proud as they look over the patrons of the place.

We also ventured into a restaurant dating from 1686, called Le Procope.  Francesco Procopio dei Coltelli from Palermo, Italy, established a popular place to gather and for centuries now, the city's top intellectuals, politicians, and elite enjoy this historic location.  The rich ruby reds on the walls are complimented by the black and white marble floors.  They work beautifully together to create a crisp but cozy atmosphere that seems comfortable but très chic and elegant at the same time.

It appears that Napoleon Bonaparte gifted this establishment with his own hat.  Truly!  Napoleon's own chapeau is proudly displayed just to the left as one enters the dining room in a glass case.

Drops of cool rain began to fall in a quiet drizzle.  We had already bonded so well as a group, swapping stories of life in Boston, Texas, Australia and California, we hardly noticed that we were all huddled together and carelessly oblivious to the light rain.

For our next stop, Lisa walked us to the sumptuous restaurant, known for their rich decadent chocolates, "Un Dimanche à Paris".

She wanted to introduce us to the "chocolate bar" located in one section of the restaurant...more specifically, Lisa wanted us to sample one of their featured offerings...the thick, rich, incredible hot chocolate drink.

The restaurant is owned by, Pierre Cluizel and Sylvie Valette.  "Un Dimanche à Paris" means "A Sunday in Paris".  They dreamed that their place would offer everything that one dreams of when thinking of the relaxation implied by this restive day of the week...Sunday...like the finest chocolate, a beautiful lingered-over luncheon, and choices of deliciously made pastries.

After sipping our cups of velvety rich hot chocolate, there was a hushed silence that swept over the group.  We all agreed in soft murmurs and in almost reverential tones that we had never tasted a drink so refined, layered, complex, and indulgent.

We meandered through an area of St. Germain that was exactly as I would have imagined and hoped for as we followed Lisa along from one delightful stop to the next.

The drizzle of soft rain left a layer of wet patina on everything. The wetness made the cobblestones shimmer and the richly colored stones and bricks of the buildings appeared deeper and broodier and well....even more Parisienne. 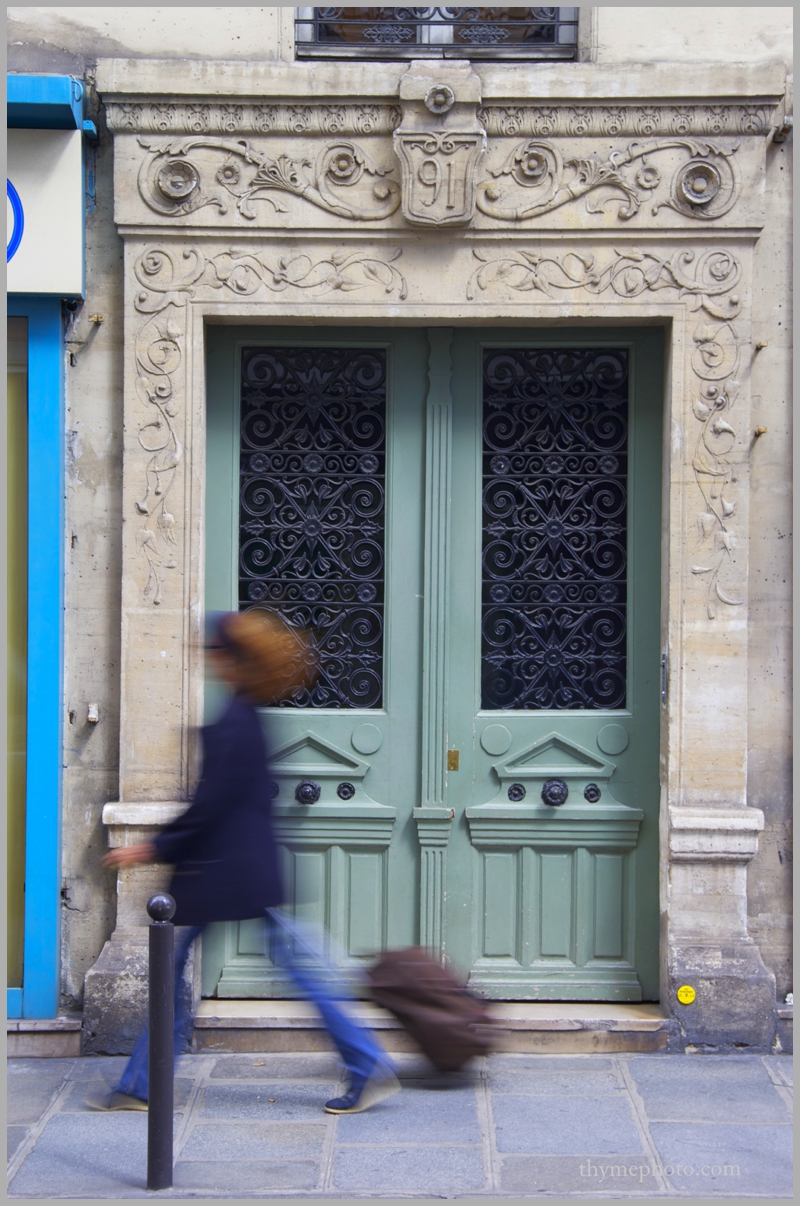 "Premiere Pression Provence" was our next stop on the tour.  Lisa would have a difficult time getting us out of this delightful shop.  The products were so artfully displayed and intriguing. The various products, alongside the varieties of olive oils, stone olive grinding wheels, and glass olive oil jars, added an organic atmosphere to the shop.  There were large clear vats of olive oil where one can select a particular kind of oil harvested in Provence, have a bottle filled, and be off with a personalized blend selection.  We definitely planned a return trip here the next day to make some purchases. 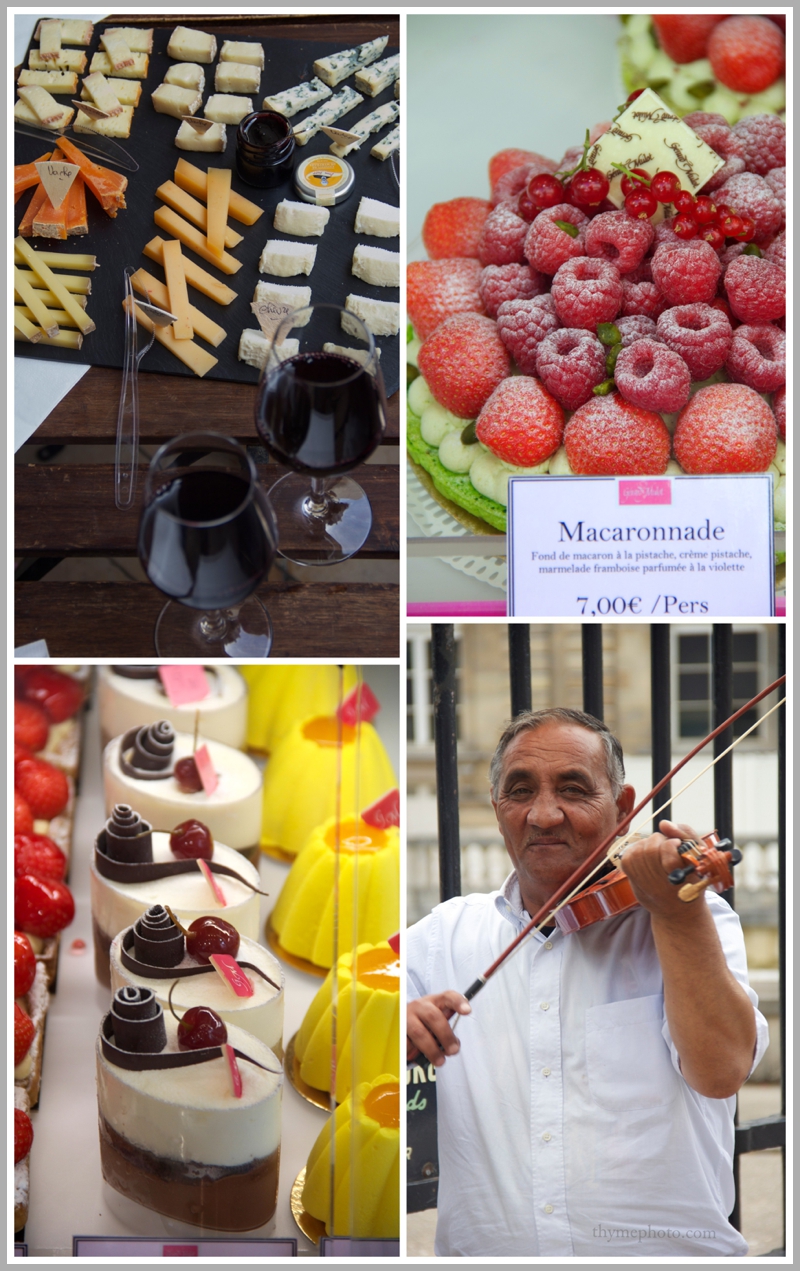 Olivier Baussan, the founder of the lovely "L'Occitane" shops (those shops, filled with lavendar scented lotions and oils, often located in major airports, give a weary traveler a brief escape to Provence, France)  wanted to create a shop that primarily featured the many varieties of rare olive oils, as well as the passionate producers of them.

Tucked away in a cozy back alley off of the Boulevard St. Germain with bumpy cobblestones that add to the characteristic charm of the area, this little shop characterizes itself in this quote;

"At Première Pression Provence,  36 olive producers [of Provence] are promoted, and the oils fussed over like Grand Cru wines"

We tasted about 6 of these Grand Cru olive oils and there was no mistaking the differences between each type of olive.  From the black to the green olives and every type in between, each had a taste that distinctively identified its producer and the region.

Before reaching one of the final stops, where we sat down and indulged in a savory course followed by a dessert sampling, Lisa wanted us to stop and visit the patisserie "Gerard Mulot".

Most of the pastry photos are from the gorgeous array of tortes, chocolates, macarons, quiches, and fruit tarts at the Gerard Mulot shop.

For our final stop, we walked through the spacious St. Germain Covered Market.  The stalls are all inside of a building but are set up in the typical street market fashion.  From vegetable producers to cheese makers, meat suppliers, and wines merchants...a tempting array of goods can be purchased and then enjoyed at the many tables that surround the market.

We all sat down to a carefully selected platter of cheeses, patés and breads...all washed down with sips of several red wines from the wine shop.  For dessert, we had samples of the macarons from Gerard Mulot's shop as well as an array of delicious sweets.

It is always difficult to break away from the people that I meet on a food tour.  The experience of tasting food together as a group in a foreign country, swapping life stories, bonding within minutes of meeting one another is such an emotionally enriching one, that I often give my last hug to the last group member with tears in my eyes.

We all shared an amazing experience, that drizzly Paris morning, so rich and so purely enjoyable.  Afterwards, we all scattered to our corners of the world with such special memories of warm laughter, hilarious stories of adventures as well as mis-adventures, and true and honest intentions and well wishes for one another.  As quickly as we bonded, we just as quickly parted ways at the end of a magical journey together...thanks to lovely Lisa of "Flavors of Paris" St. Germain food tour. 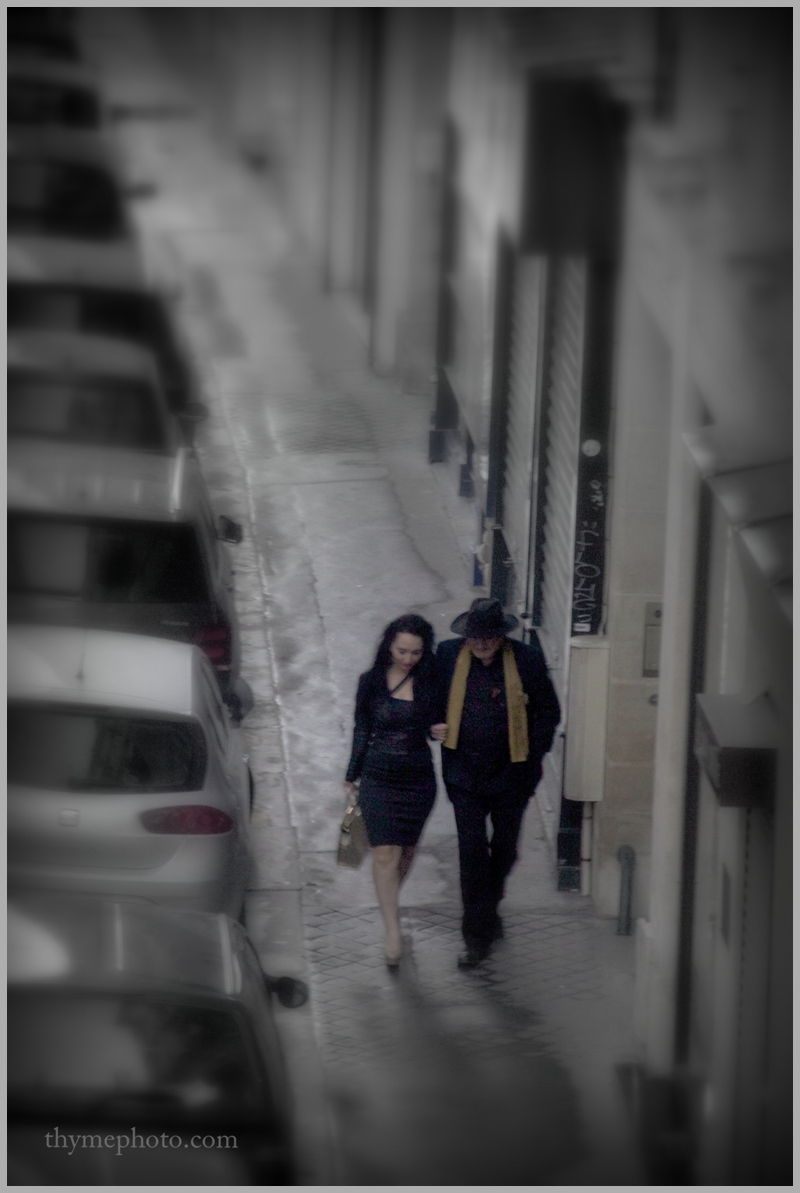